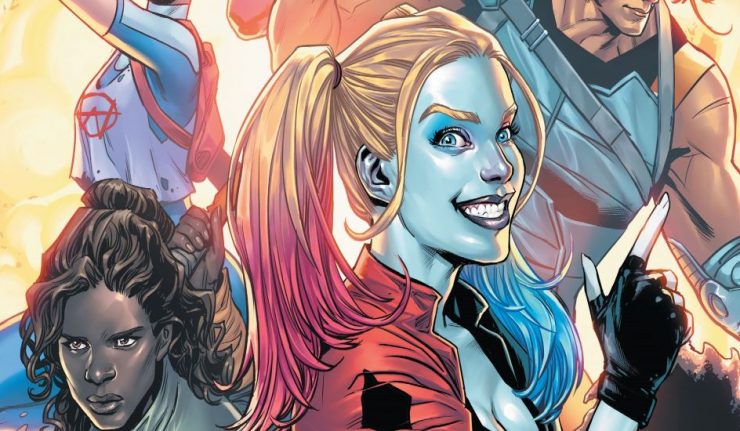 The world knows Ted Kord as Blue Beetle, superhero. But the members of Task Force X know him as something else entirely—the violent and vindictive puppet master who rigged them to blow. With Deadshot murdered and Kord finally at their mercy, will the Suicide Squad get their revenge once and for all?

Suicide Squad #10 seems to have actually done the thing it said it would do. It has killed Floyd. Is that for real? I am not sure, but for this one issue, that is something good. Not that I dislike Floyd or am glad Zoe is without her father, but it does set up an amazing possibility for her future in the DCU. New, younger blood might be interesting.

There is a loving, silent tribute Harley pays to Floyd. It is beautifully done. The whole Deadshot story has been the strongest aspect of this series and I think this issue really handles that spectacularly.

Suicide Squad #10 pulled a Deus Ex Machina and did not manage to stick the landing. The big reveal, that Ted wasn’t the baddie was telegraphed miles away. No one ever bought it and then to have it be the Black Mask, shapeshifter thing again, is just pretty lame. I did not like it in previous issues and I don’t like it here.

I still think this series has too many characters. What a mess. I know I am supposed care about these characters, but I just don’t. I don’t care. Sorry Mr. Taylor. I like you a lot.

Suicide Squad #10 is the penultimate issue in a series that went on a bit too long. I know this is the story Taylor says he wanted to tell, but I just feel like it is messy.  One cant really understand where it was going or why it was going there. I never want to see a title cancelled after 11 issues, but I am not really going to miss this one when it is gone.