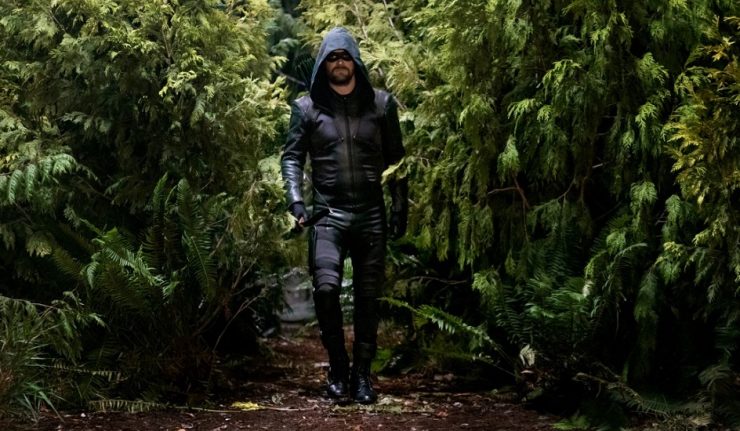 Arrow actor Stephen Amell may have hung up his hood, but this global pandemic almost gave his fans a silver lining.

Amell – who portrayed tortured hero Oliver Queen on the series that birthed the CW’s Arrowverse – went on Smallville alum Michael Rosenbaum’s podcast Inside of You last month to discuss his new series Heels on STARZ and his COVID-19 diagnosis. He also shed light on a topic that could ensare Arrow fans’ attention. Due to the pandemic, last summer’s production schedule was in a state of flux. During his quarantining, Amell decided to give his former producer and current Arrowverse showrunner Greg Berlanti a call. His proposal: Since he was already in the area and border crossing may be a problem for American actors, why not resurrect Arrow for one more season to “keep it on the radar”? Although production on Heels is once again underway, this attempt to bring back the Emerald Archer shows there may be hope on the horizon.

Arrow Actor Proposed A Resurrection – What Can We Expect?

Arrow concluded (?) last year with a limited season that revolved around Oliver’s final mission to save the multiverse. Along the way he even connected with his daughter Mia (Katherine McNamara) brought to the present from 2040. This mission climaxed during Crisis on Infinite Earths. In the first installment, he made the ultimate sacrifice to ensure 3.1 million survived the destruction of Earth-38, then was resurrected as The Spectre to reignite the then-dead Multiverse. His legacy was further cemented by his decision to both resurrect the most painful losses in his eight-year-crusade, and bring all Crisis heroes together on one merged Earth, Earth-Prime, should they need to unite again. His final scene showed him reunited with his wife Felicity (Emily Bett Rickards) who joined him in the afterlife thanks to the Monitor’s assistance. As for Mia, Oliver passed the Green Arrow mantle on to her before his death. The final verdict is still out on proposed spinoff, Green Arrow and The Canaries, costarring Arrow alums Katie Cassidy and Juliana Harkavy.

The question that the Arrow actor’s proposal raises is simple: How do you bring back Oliver Queen? In the comics’ storyline Quiver, writer Kevin Smith created a situation where Hal Jordan, as Parallax and later the Spectre, resurrected the Emerald Archer but did so without a soul. The result was a Green Arrow missing a decade of memories; Hal had deliberately erased the dark years from his memories at his soul’s request. As The Spectre, Hal tried to rectify this screwup by bringing Oliver’s body to heaven to convince his soul to reconnect with his body. Oliver’s spirit refused, however, both content with the peace he’s found and that there’s an untainted part of him in the land of the living. Only out of familial obligations to his newfound son, Connor, did Oliver’s soul finally agreed to merge with his mortal self and rejoined reality completely. If a ninth season of Arrow happened, could we expect a similar journey for Oliver? And how would Felicity figure in to that plan?

If such a rebirth were to happen, a good tagline could mirror that of the comic: “Welcome to the resurrection.” And as far as viewership, if it were to occur, never doubt Oliver Queen’s ability to hit the mark. Nor the Arrow actor himself, Stephen Amell.