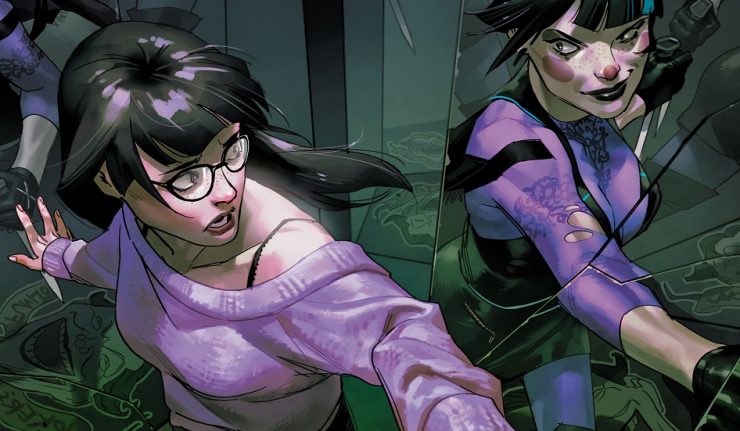 Punchline #1: Spinning out of the pages of “The Joker War” comes the first solo book starring the blockbuster new character Punchline. As she faces the consequences for her role in “The Joker War,” the story of how Alexis Kaye became Punchline will take Leslie Thompkins, Harper Row, and Cullen Row on a harrowing journey that reveals a fringe teenager’s radicalization to the ideology of a madman. It’s a terrifying tale so big it demanded an oversize special issue!

If the mission was to establish that Alexa Kaye aka Punchline was anything but Harleen Quinzell, James already proved that. Post-Joker War, he and Sam drive home that fact even more so. That being said, this review of Punchline #1 is one of the most complicated I’ve ever written.

The narrative of the story establishes Punchline as a millennial through her choice of weapon: Social media. The dual nature of Alexa is conveyed brilliantly with Andolfo’s ability to convey her moods through tight close-ups of her smile. By focusing Punchline’s true face via her mouth and the specially-colored captions of her podcast, the team gets across how powerful freedom of speech can be in the wrong hands. A child of the 2000’s, Alexa is able to put a different spin on her road to becoming the Joker’s right-hand woman that establishes her as just another victim of the clown’s madness.

The story she tells in court can best be interpreted as diluted and superficial; her real voice is in her podcasts. The presence of the Bat-family is brilliantly provided through Dr. Leslie Thompkins and her young aid, Harper Row aka Bluebird. The scam that Alexa is running on both fronts takes on a personal attack through Harper’s younger brother Cullen being sucked in to the following she builds. More on that later. Getting back to the flashbacks over the podcasts, Tynion is able to establish that duality of Alan Moore’s “The Killing Joke” narrative; that notion of the clown remembering his past sometimes one way, and sometimes another. Alexa even touches on those events as she visited the site of Gordon’s torture from that story, admitting that files she found had redacted sections. In other words, Tynion conveys to the reader that Punchline does not have the full story of that night.

Given her butchering of a rat in that moment, it begs the question of whether the content of these podcasts capture her logic at that moment, or if it’s deliberately diluted in order to solicit empathy for her case? Then there is the question of the chronological framework of these podcasts. Just when you think these are told in retrospect, you see Alexa as Punchline in full costume walking away from her recording equipment, then moments of her testing out her pseudo-Joker toxin on innocent people until coming into contact with the clown himself. Therefore, the reader is then left to speculate how far in advance did Punchline actually prepare this contingency plan?

As earlier noted in the review, the reach of Punchline’s podcasts and their seductive nature is conveyed through their impact on Harper’s younger brother, Cullen. Cullen is the ear through which the reader learns about Alexa’s journey into madness. An innocent gamer with no interest in supervillainy, he only sees Punchline as Alexa, another victim of the Joker’s madness. What makes her influence all the more dangerous is a boy that Cullen likes a fellow Punchline sympathizer.

Beyond what has become an international movement – what is with those tattooed psychopaths in her monologue? – every good storyteller knows how to rope in an audience through the villain making a personal attack. Leslie Thompkins, meanwhile, is just as vulnerable to Alexa’s manipulation of the system, made aware via a personal call. To her, Punchline reveals the full extent of her psychosis, viewing herself as the Joker’s chosen messiah. Tynion chooses Cullen and Thompkins as two opposite sides of the spectrum, for they were given two different versions of the same story. Cullen donning the clown mask beside his hook up in Haper’s view is the perfect cliffhanger. It also makes you think, before the caption “To Be Continued in 2021” that this is the first of a miniseries rather than a one-shot special.

I would have to say the only negative in Review: Punchline #1 is the character design of Leslie Thompkins. In Detective Comics, she was a basic brunette and yet the art time decided to age her up with showing streaks of grey in her hair. I know the reboots have tried to make her less elderly, but here it seems as though they could make up their minds.

Tynion has fleshed out what will grow to become a strong presence in the DC Universe. Punchline’s manipulation of both the system and the public proves that she can step out of the shadow of The Joker if she chooses. And based on her revelation to Leslie, that’s what she fully intends on doing. The personal consequences her movement inflicts upon Bluebird’s family will perhaps make a nemesis out of her moreso than Batman.