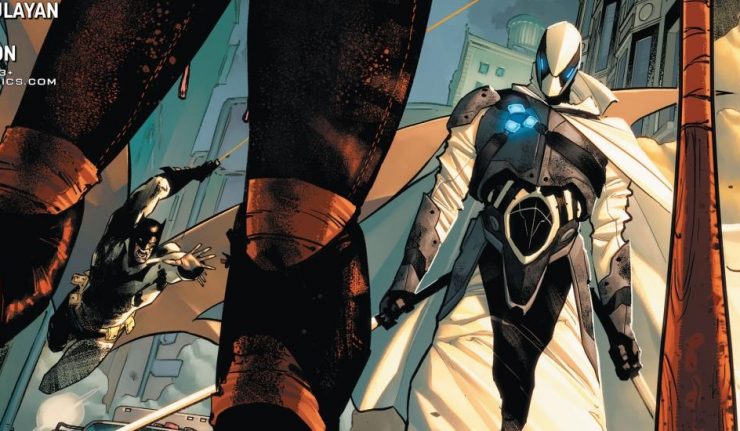 Batman #103: Batman and Ghost-Maker go toe-to-toe to decide which of them will remain Gotham City’s hero. The city is changing faster than ever in the aftermath of “The Joker War,” and with this change comes increasing dangers as Gotham’s citizens demand that Punchline be released from prison! Plus, Harley Quinn faces certain death at the hands of Clownhunter!

Last issue, we discovered that Ghost-Maker was someone Bruce knew from his youth, when he was training to become Batman. He was also receiving training from some of the same masters, and had a rivalry with Bruce. In Batman #103, we find out a bit more. Like Bruce, he was in training to become a crimefighter as well.

It seems that this rivalry is Ghost-hunter’s motivation for coming to Gotham. Batman explains this to oracle, “He’s still upset that I made fun of him when he was fifteen years old. And he’s even more upset that I’ve beaten him every time we’ve gone head-to head since I turned twenty”.

That statement is somewhat telling, as it implies that before that point, Ghost-Maker won at least some of their fights previous to that point. This marks him as being nearly as good as Batman, and potentially his equal or better if he’s improved his game in the meantime.

And he appears to have come to Gotham to prove himself a better crimefighter than Bruce. And at first, it seems that perhaps he might be. He explains to Bruce that he’s solved an impressive amount of crimes in the few hours since arriving in the city. However, Bruce explains that he already was aware of those crimes, and details nuance of the situations that Ghost-Maker overlooked and that his interference had let bigger criminals escape justice.

Cassandra Cain makes an appearance, still wearing her Bat-themed costume from the Joker War. Between this and Barbara Gordon still acting as Oracle, cements that Cassie has taken on the role of Batgirl – or at least a Batgirl, as it appears that Stephanie Brown will be partnering with her, also as Batgirl.

I was somewhat intrigued by Ghost-Maker’s statement, “You said you didn’t need a mask or pseudonym to fight crime in Gotham”. It makes me wonder what he originally envisioned his crimefighting career would look like. Did he intend on fighting crime openly as Bruce Wayne? And what exactly caused him to change his mind about using a disguise?

Harley Quinn is unsure of her future, but it seems that she’s leaning towards fighting on the side of good – for now, anyway. She has an encounter with Clownhunter, who is clearly outclassed. After handily defeating him, she explains to Batman, “Hey Bats. Don’t be mad. I didn’t kill him or anything. I’m tying him up like you heroes do. We can toss him over to the pigs so he can get tormented by our city’s broken justice system. See, I’m picking up the hero thing fast”.

I think Tynion’s use of Harley in this Batman run is my favourite interpretation of the character, next to the hilarious Harley Quinn cartoon series. Her irreverent attitude makes her an offbeat addition to the Bat-Family, but her skills as a fighter and psychologist would also make her an asset.

The art from Carol Pagulayan, Danny Miki, and Guillem March is top-knotch as alway. Their take on Batman is impressive, capturing his iconic look perfectly. I also love the look of Ghost-Maker. Well, except for the parachute pants. Not only do they look goofy, but I doubt they’re practical for crimefighting.

I’m still not sure what to make of the character of Clownhunter. He seems somewhat lacking either as a villain or a potential ally to Batman. However, I suspect that Tynion has plans to transform him into a more noteworthy character. I’m not sure that the character has shown any potential for such a transformation. However, I am willing to wait and see what Tynion makes of him.

Batman #103 once again shows that Tynion has a solid grasp on the character of Batman. I have seen some fantastic interpretations of the Dark Knight over the years, but Tynion’s is definitely one of my favourites.