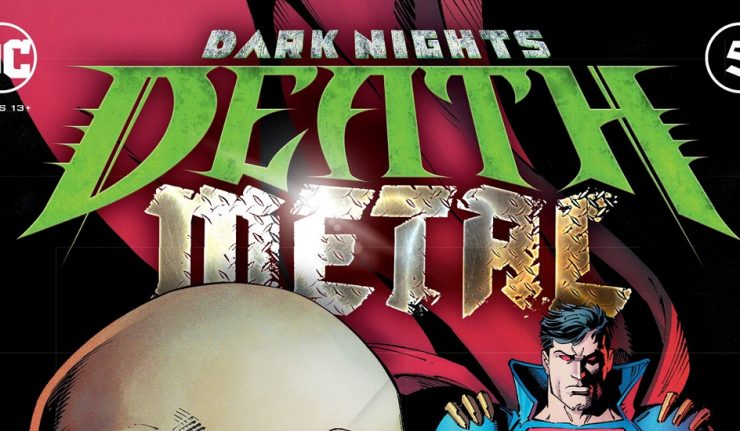 “Superman seeks to pull out the best in us.  Batman seeks to cure the worst.  You seek the truth!  And in this final war, the truth is the metal in which we live or die!” – Lex Luthor to Princess Diana/Wonder Woman

It’s the fifth issue of the Metal Encore! The legendary team behind Dark Nights: Metal and Batman: Last Knight on Earth take center stage and reunite for one last tour.
The Darkest Knight has won. With absolute power at the villain’s fingertips, Wonder Woman and the rest of the DC heroes are nothing to him. As the Darkest Knight turns his sights to his true goal, remaking the Multiverse in his image, can Earth’s heroes rally together to make a last stand?

Finally,we are back to the core Trinity engaged in battle.  Prior one-shot issues such as Dark Nights: Death Metal – Infinite Hour Exxxtreme or continuing series such as Justice League  have been contributing to the overall story.  Scott Snyder and Greg Capullo’s efforts in Dark Nights: Death Metal provide the core jumping off points to the story.

Here we have the Trinity on the verge of being defeated at the hands of The Robin King.  Anyone who has followed any aspect of any DC villain is that you never engage in needless posturing or pontificating.  However, what does The Robin King do….?  Sigh.  Did he not watch the 1966 series?  I thought that this was a multiverse.

Snyder provides a Lex Luthor with a soul, but again, not to be trusted.  After all, he has assembled his Legion of Doom again.  It’s obvious that he is not to be trusted by anyone.  Yet, the Justice League and the Legion of Doom have to put their faith in Luthor in order to take down both Perpetua and The Batman Who Laughs/The Darkest Knight (How many forms will this character take?).

We often forget that Lex Luthor was from Smallville and Snyder takes us back to that small child who was not found in a rocket by the Kents, but to an abusive home that contributed significantly to the genius before us now.

Why do I feel like he is playing all sides against each other?

There’s a revelation by both Superman and Batman to Wonder Woman that altered the lens of this comic significantly.  Snyder fooled us.  I’ll not reveal anything here, but if this timeline loses its knots, we may have something akin to a year or so without some major players in the DC Universe.

Or perhaps they will never exist again.

Superman arguably in “the wrong room” leading his troops into battle.

Can Wonder Woman ever be depicted again without the blue highlights (Thanks Greg Capullo).  Perhaps Gal Gadot needs to reshoot Wonder Woman 1984 with a new look?

The comic is back on track.  Well, the core issues never were off track, but the side streets that The Batman Who Laughs took really had some interesting detours.  The best things to come out of this are The Grim Knight and The Robin King.  However, TBWL and this shadow incarnation he is now is not what he needs to be.