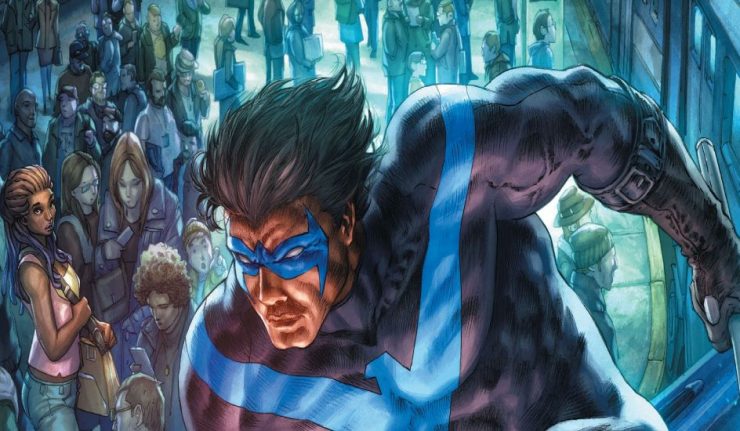 One bullet robbed Nightwing of his memories and identity. One bullet erased Dick Grayson and replaced him with Ric Grayson. Now, with Dick’s true identity returned, KGBeast is back with one last bullet for him. Using Bea as bait, KGBeast has made it abundantly clear that this one last bullet isn’t intended for Nightwing’s head—this one is aiming to puncture his broken heart!

Nightwing #76 has some of that old fashioned awesomeness we see out of Dick Grayson. After he quips and flips and fights and wins, he does the honorable thing. He proves he is better than Bruce. We all want to stand and cheer. This is the Dick Grayson we know and love. Of course, then he does something else which does not work at all. See below for that.

This issue is packed with action. Artist, Roman Cliquet is a perfect fit for books like this. Dick doesn’t move like the rest of the characters in the DC Universe. He flows with such grace and precision, even when he is locked in mortal combat. Cliquet just captures the entire vibe. It is delightful to watch. Spend a few extra minutes with this issue. It is fast paced and the story begs you to turn the pages. Resist that urge and enjoy the excellent visual storytelling

Nightwing #76 features a decision that simply makes no sense. We see, in this issue, that Bea is a badass and that she can hold her own. She saves herself so Nightwing can take on the KGBeast and yet, Dick still makes the decision to “keep her safe.” This is not as bad as putting a woman in the fridge, but it is a close second. The point of a secret identity is to keep your people safe. It would be different if he was out as Nightwing, but he isn’t.

Nightwing #76 gives us a bit of everything. We see the most heroic and noble version of Dick Grayson we all know and love. However, he makes some choices that remind us who raised him and the life he is choosing to live. Is Bea being moved out of the way to make room for Babs?