The Scumbag #2 -“JAZZ APPLE ARMAGEDDON,” Part Two The fate of the world rests in the hands of the worst person on it!
NEW ONGOING SERIES from the writer of DEADLY CLASS! RICK REMENDER launches an all-new comedy espionage series, THE SCUMBAG—the story of Ernie Ray Clementine, a profane, illiterate, drug-addicted biker with a fifth-grade education. He’s the only thing standing between us and total Armageddon because this dummy accidentally received a power-imbuing serum, making him the world’s most powerful super spy.
The Central Authority meets Ernie’s demands to help save the world, and he meets his new partner Sister Mary. Together, they uncover a terrible plot by the terrorist group Scorpionus. Will Agent Scumbag help stop them or join for a bump in pay?
This new ongoing series will feature a murderers’ row of all-star artistic talent rotating each issue. The first issue showcases the stunning work of LEWIS LaROSA, with subsequent chapters and covers by brilliant talents such as ANDREW ROBINSON, ERIC POWELL, TULA LOTAY, WES CRAIG, ROLAND BOSCHI, SIMONE DI MEO, MARGUERITE SAUVAGE, DUNCAN FEGREDO, YANICK PAQUETTE, MIKE McKONE, DAVE JOHNSON, MORENO DINISIO, and many more!

The devil’s in the details.  In this case, it is in the action away from the dialogue.  In the last issue, we literally see The Scumbag Ernie Ray in a drug induced stupor defecating in the streets in front of a crowd.

Now we see Ernie Ray meeting his new partner in saving the world, Sister Mary, while scratching his nether regions.    Artists Lewis LaRosa, and Moreno Dinisio leave no stone unturned (or region unscratched) in their artistic depiction of this guy!  Whew…. and he sniffs his hands.

Rick Remender – The research he must have done to even capture this type of character.  The readers should be excited as we get a glimpse at least one of Scumbag’s newly acquired powers – looking at a photograph and being able to locate exactly where that person is within the city.
To reiterate, this is the Greatest American Hero series from the 80s, but we have the worst character in the world with the powers.  Thanks goodness for Sister Mary, his “handler” (though who would even want this guy in your automobile) from the government.
Here’s something new – A villain that can touch your forehead and place your consciousness into another person.  Picture being safe in your home, and this guy comes in and touches you and you are transported to a desert dying of thirst and miles from anyone.  You’re now in someone else’s body in terrible circumstances.  How does he know where the worst Hell on Earth could be?
Remender is providing both comic gold and an intriguing story at the same time.  Deadpool has nothing on this guy!
To make it perfectly clear, the fate of the world is in the hands of its worst inhabitant.  You have to buy into this story. 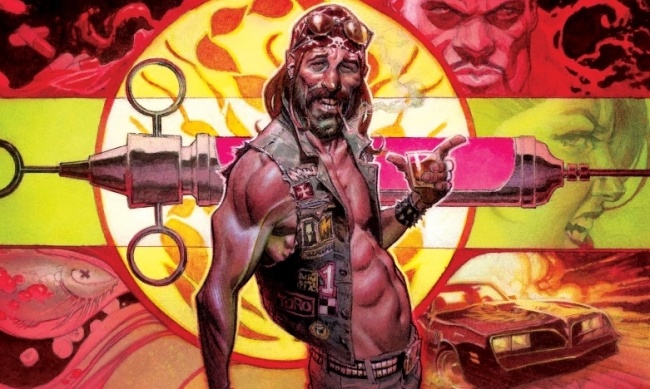 This is a major adult comic in that you get a glimpse into an underbelly of the world you may not be prepped for.  It’s a horrific adventure with no social awareness or moral thermometer.  Basically, it’s a guilty pleasure of eating three Big Macs when you adhere to a vegetarian lifestyle.

That meal taste good going down, but you can’t unsee or unsmell the aftermath.

If you are into something really really different and you like uncomfortable clashes, this is your book.  You’ll laugh and wince and roll your eyes. Get in on the ground floor of Scumbag!