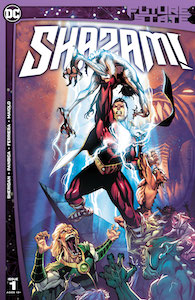 The Multiverse survived. Now we get a glimpse over the not-so-distant horizon in Future State: Shazam #1. Billy and Shazam are not the same when last we saw them. The change is significant and friends and teammates are noticing.

Writer Tim Sheridan introduces a compelling premise. How precarious is a secret for a hero who is used to keeping dangerous secrets? The answer like so many depends on the person keeping the secret. 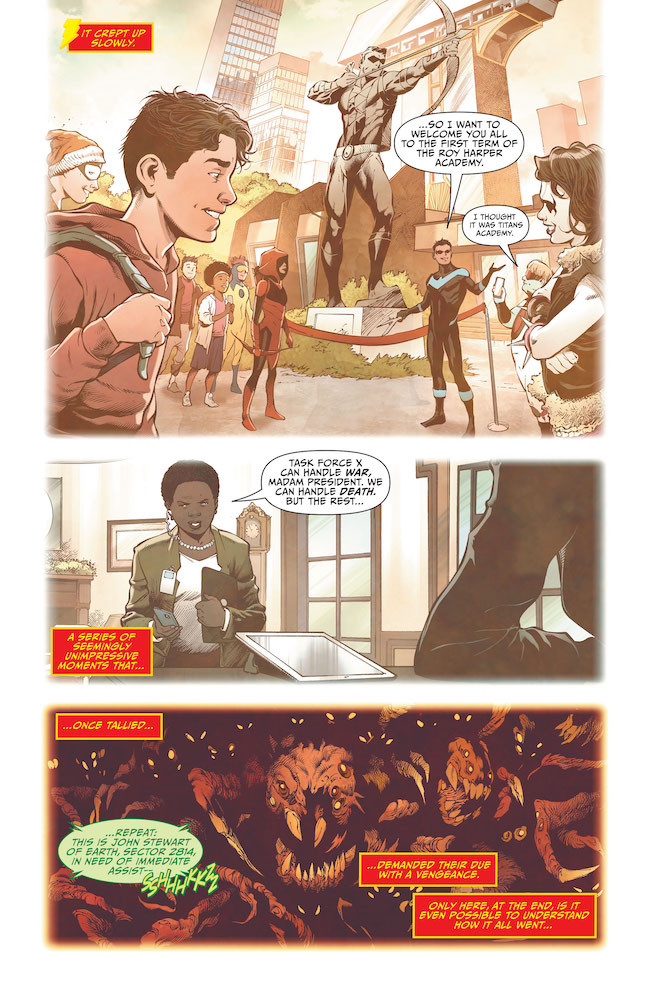 Billy has learned to keep hidden from the world the truth that Shazam is just a little boy. However, his decision to make a deal that he must also keep from his teammates comes with consequences. In addition, when those around him can tell that  Shazam is hiding information the pressure builds. Eventually, the center will not hold.

Another consequence of Billy’s secret is that he is doing things, and he is unaware of or unable to control his actions. The tension increases because Billy works with intelligent heroic figures. People like the question, who ask questions, as well as Vixen, and Miss Martian. 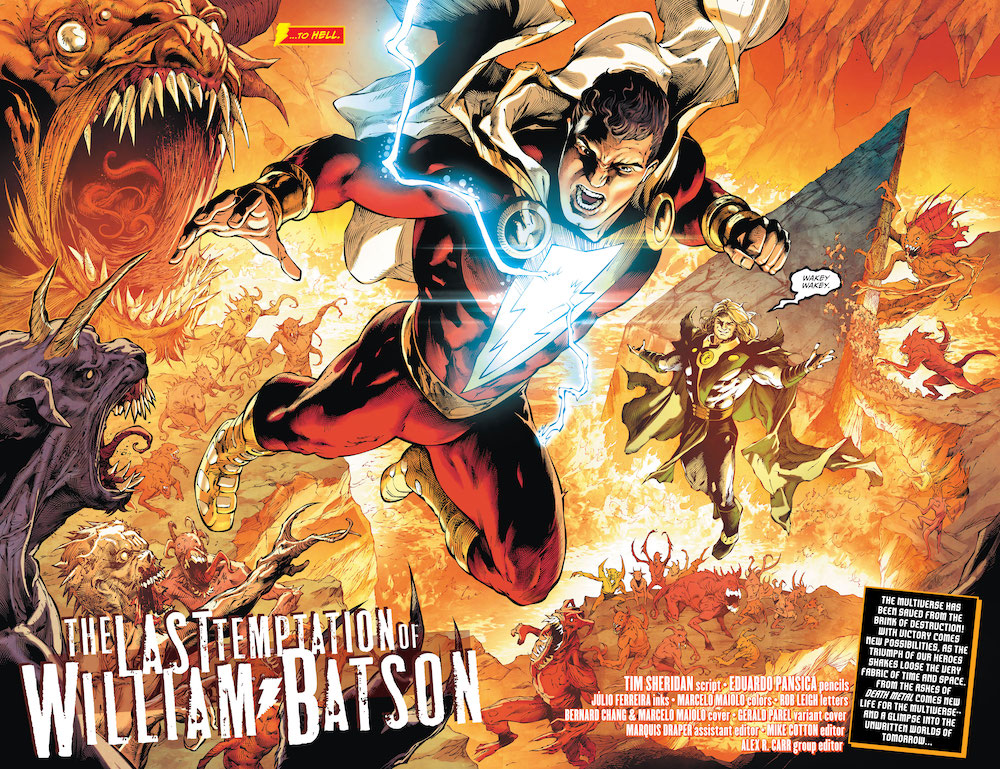 Now, either Billy has a dual identity, or he is being controlled and he doesn’t know it. Eduardo Pansica showcases amazing skills. His technique features textured pencils that are a combination of light and shadows that reveal the emotions on characters’ faces even when the dialogue is saying something else.

A bonus for fans is the appearance of three characters readers will enjoy. Giganta, Manhunter, and Creeper all play important roles. Sadly, one is tragic and revealing. Also, the creepy appearance of Neron on the first page is a teaser that grows more sinister and suggests a more dangerous form of the demon to consider. 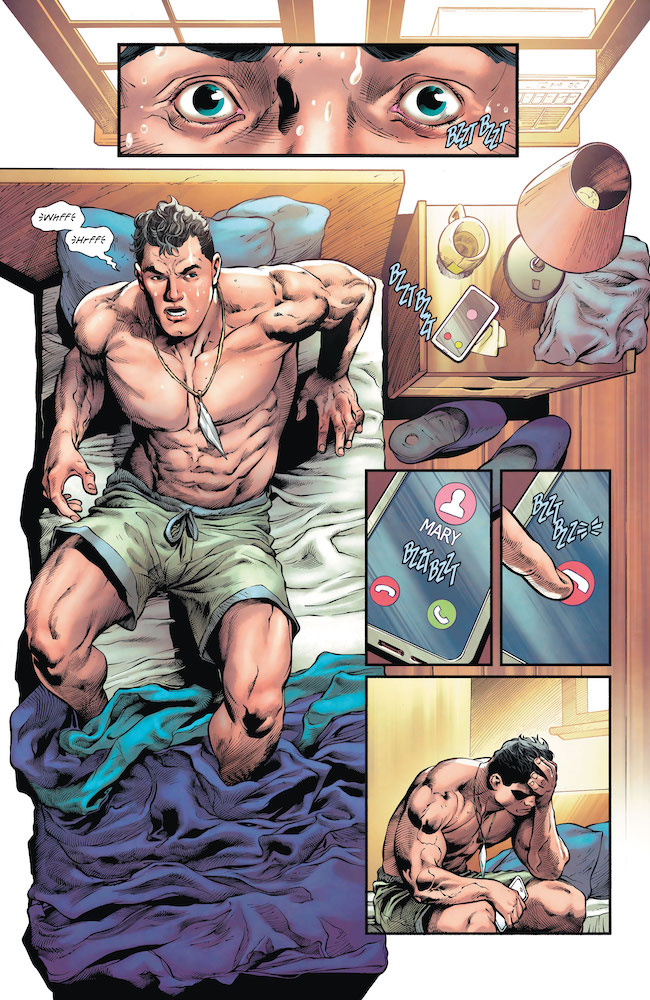 Bunker, Vixen, and The Question are welcome delights. Powerhouse is a fun addition and M’gaan M’gann’s loos and sounds different from previous iterations.

There are secrets and spoilers but those will not be found in this review. Like Billy’s secret, the discovery readers witness will show not only the depth Shazam will go to live up to a heroic ideal. Sadly, they also illustrate just how much danger he’s really facing. 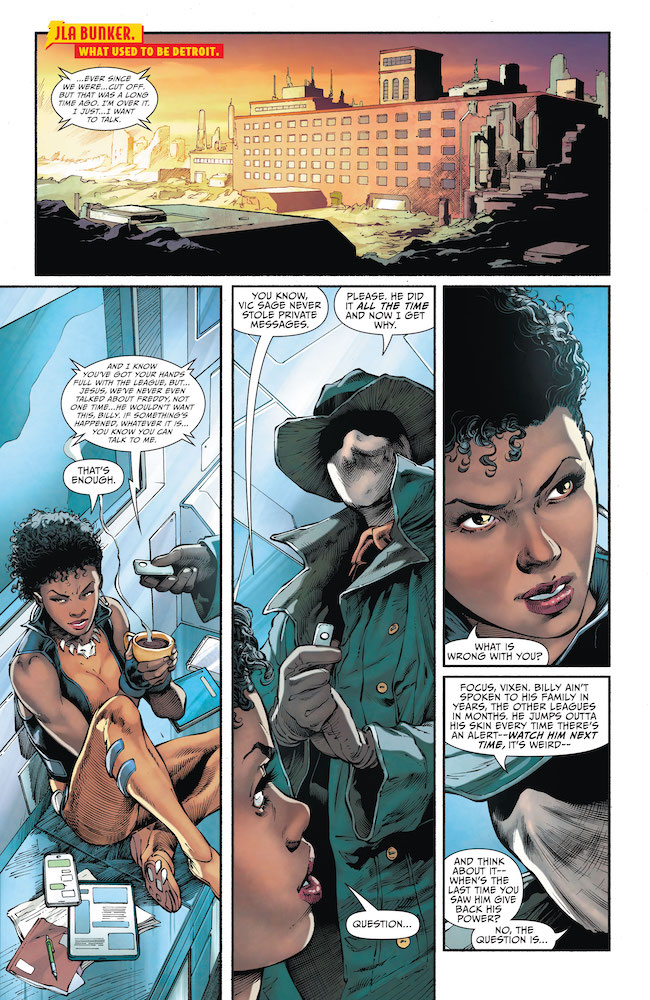 Many writers portray Billy as either an innocent boy who is young and earnest or a hardened street child made callous by a system that claims to care for his welfare. Sheridan focuses on the conflict of personalities and personas afflicting Shazam. It’s rich material and brilliantly composed.

Julio Flores inks, Marcelo Maiolo, and Pansica’s pencils brighten the lights, darken the shadows, and set the tone, imagination, tension, and mystery in every panel. Future State: Shazam #1 is a reminder for every reader facing the trials of life. No matter the age, there are always obstacles and temptations. The challenge is the decision each person chooses to make. Even when it means turning around to fix a mistake and right a wrong.