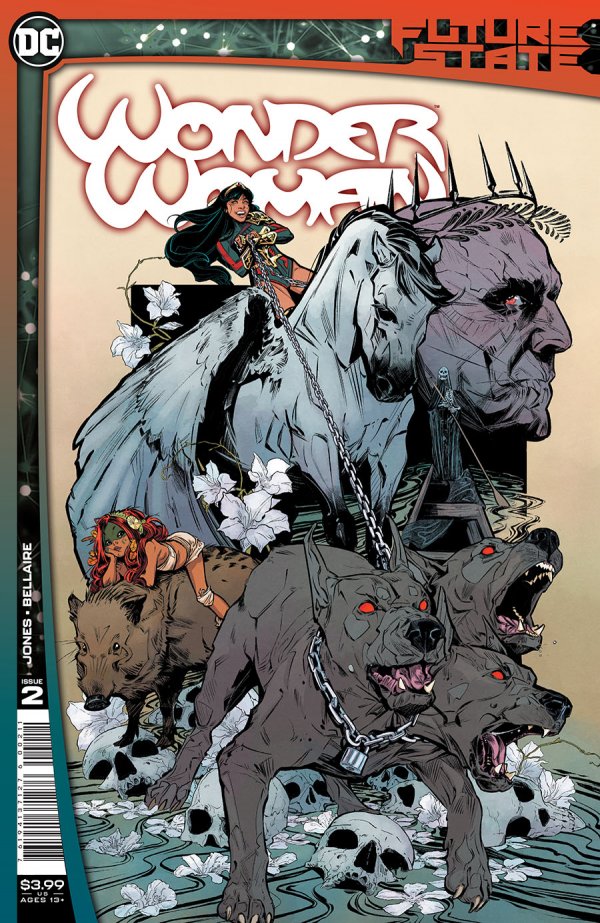 ” Uh..I feel like you were not paying attention.  you know what…I’ll do it again”- Yara Flor (Wonder Woman) performing a childish illusion trick to Hades

Future State: Wonder Woman #2 -Emerging from the Amazon rain forest, the new Wonder Woman must battle her way through Hell!
Witness Yara Flor at the height of her power as she takes on the king of the underworld, Hades himself!
Betrayed by a close ally, Yara’s back is against the wall as she is forced to battle legions of demons for survival and to liberate her Themysciran sister. You won’t want to miss the exciting conclusion of this of rising superstar hero’s first adventure! 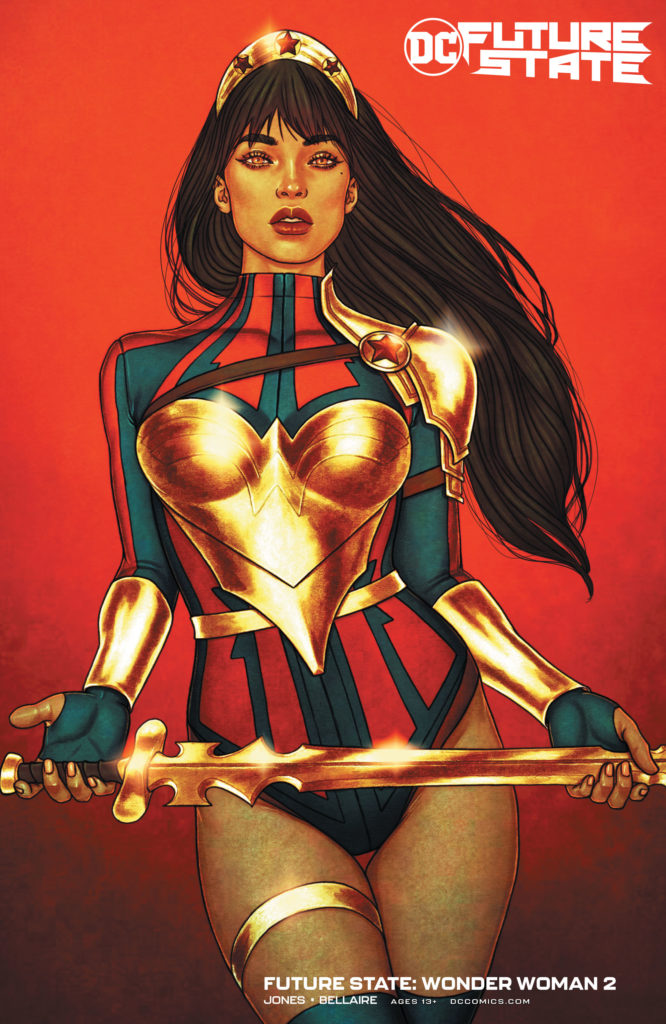 The thing you have to appreciate about Joëlle Jones and her story telling is that it is precise on the art and color and brief on the dialogue.  That is not a critique of her as a writer as her writing skills are succinct and she has found a home in this Future State Wonder Woman.

Accompanied by her sidekick of a flying horse named “Jerry” and a “thorn in the side” sidekick of Caipora.  Yara Flor journeys to Hell to save one of her Amazon sisters from her certain fate.  Hades’ wife, Persephone, gambles with Yara Flor – find Potira and save her or join her in eternal torment.

Here is where Jones thrives as a story teller and an artist.  Her work in both mediums work seamlessly to tell the story through both pictures, fun dialogue (Yara is no Diana Prince….but we don’t need her to be.), and informed story telling! 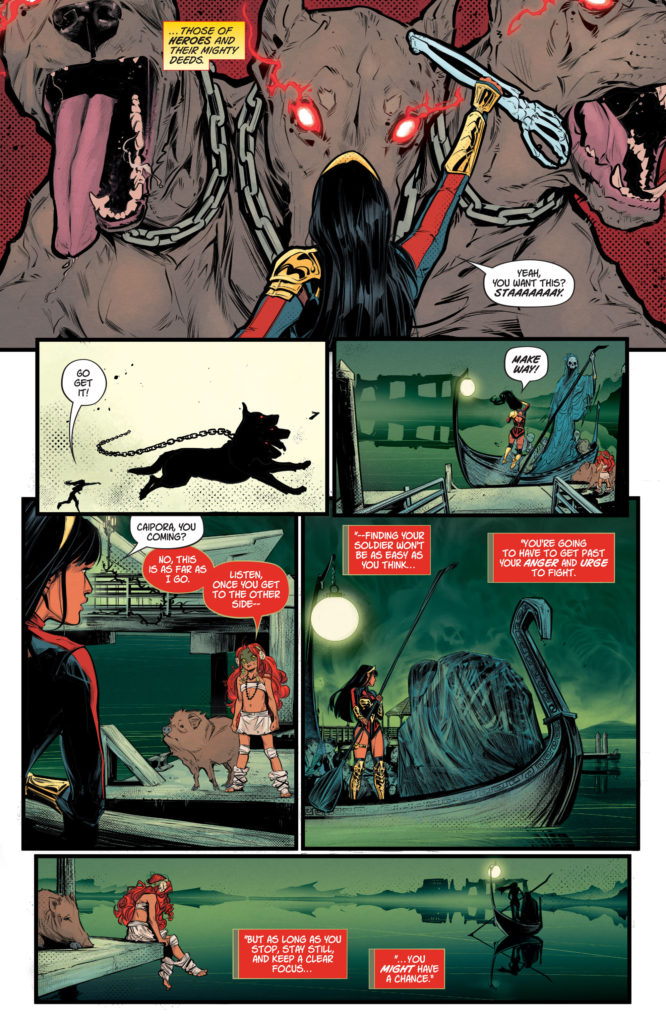 Jones’s artistic abilities to draw strong women is her best attribute.  While her work on Catwoman was admirable, this is ground breaking stuff for this character.  In someone else’s hands, I am not sure that Yara Flor would thrive.  But Jone’s way of telling stories through both sides of her pencil make Yara deserving of a long haul in the DC Universe!

Another Shout out to Clayton Cowles and his lettering!  When you hear the voices as Cowles intends you to in the lettering, that’s an art in itself!  Capora’s red boxes give her an imposing demon imp vibe.  The narration in yellow, and Hades in black.  His work is as important as Jones’ as his skill lends itself to the story telling quite nicely! 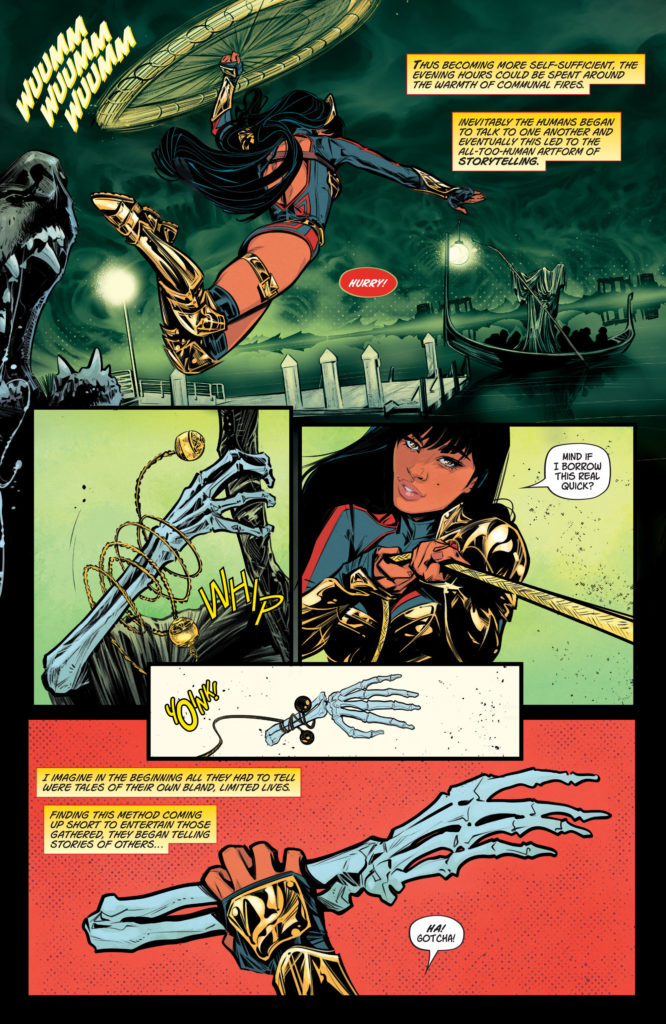 None.  In fact, given that Diana is “gone” in this new vein of Future State, Yara Flor has come out of nowhere and is a perfect fit.  We needed a new Wonder Woman with her mixture of strength, diversity and moxie!  Jones has found her niche…I hope DC let’s her run with it!

I’m already a fan of Future State, but to have Jones at the helm of a new character is a huge bonus!  Again, get in on the ground floor and let’s hope DC plays the long ball with this comic!  It has so much potential!