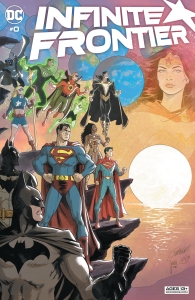 Infinite Frontier #0: The next phase of the DC Universe begins here! Dark Knights: Death Metal presented the darkest threats of the Multiverse. DC Future State revealed what may lie ahead. Now it’s time to look into the Infinite Frontier of the current-day DC Universe.

In Gotham City, The Joker jolts citizens awake with an attack even the Dark Knight never expected. In Brazil, a young woman discovers her destiny and her connection to the Amazons. In Belle Reve, Amanda Waller plots an invasion of Arkham Asylum. In the far reaches of space, while the Green Lantern Corps hosts a summit of its greatest enemies. At the Hall of Justice, the League joins forces with Black Adam. Beyond the mortal world, Wonder Woman settles into a new role in the godsphere. And somewhere in the DC Universe-it’s the return of Stargirl, in an all-new tale written by Geoff Johns!

This oversized, all-star issue kicks off the next great era of storytelling and excitement as top writers and artists reveal what’s next for the World’s Greatest Heroes and opens the door to some of the greatest stories of 2021.

Infinite Frontier #0 is a title I’ve been waiting to get my hands on since it was first announced. Dark Nights Death Metal promised to finally complete the overarching storyline of the Rebirth era. And in resolving that, all the continuity issues arising from Doctor Manhattan’s messing with DC history would finally be resolved. However, that story only gave a couple teases about the status of DC continuity. Then we had to wait two more months due to the entire main line of comics going on hiatus during the Future State event.

That event dropped a few oblique hints at the current state of the DCU. But, Infinite Frontier #0 really starts to give us an idea what’s going on in the DC Universe. However, the focus is more on teasing upcoming storylines in a number of DC titles than on explaining the changes to DC’s cosmology.

The individual segments, written and drawn by several of DC’s hottest talents, are tied together into a single narrative by a framing story. This framing story picks up the story of Wonder Woman following Death Metal. Having been raised to godlike status (for the third time now), Diana is offered a place in the Quintessence. Diana is unsure whether to take this step or not, so the Spectre takes her on a tour of the DCU to help her decide. 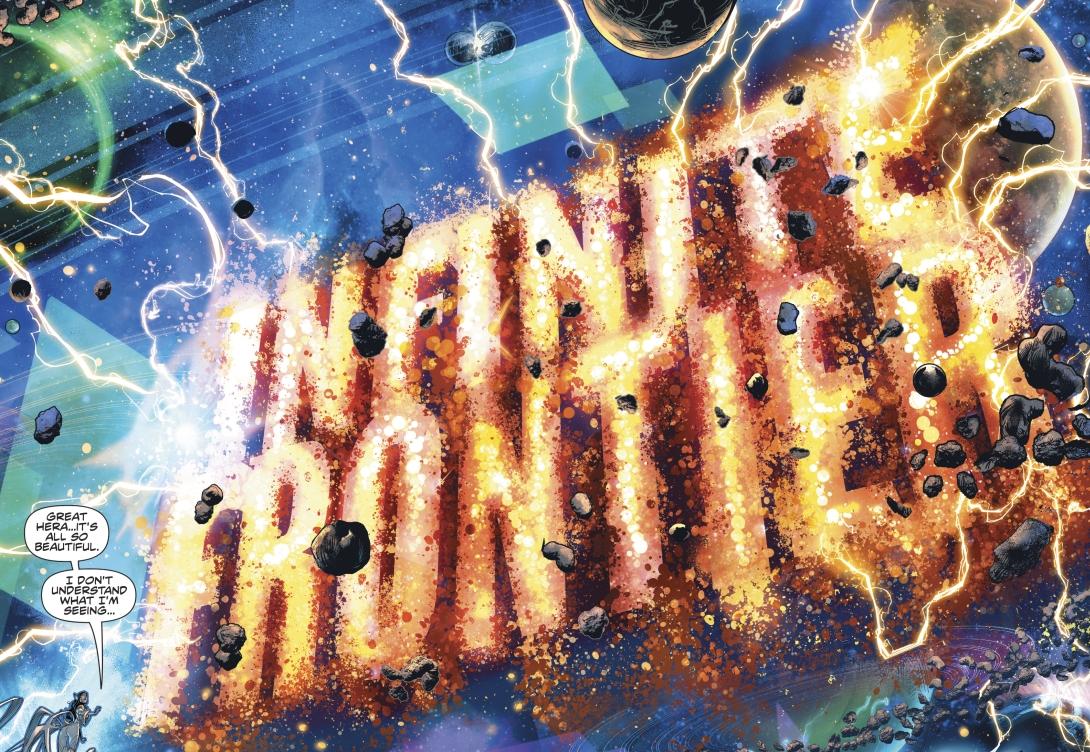 First off is a visit to Brian Michael Bendis’ Justice League. We see Superman and the Flash arriving to the scene of an emergency to find that Black Adam has already handled the threat. Superman seems hopeful that Black Adam has had a change of heart and has decided to become a hero again.

We get previews of new titles or new directions in existing comics: the Batman and Superman families of titles, Wonder Woman, Wonder Girl, Justice League, Green Lantern, The Flash, and Teen Titans Academy. Also, there’s a Stargirl story, hinting at the upcoming Stargirl Spring Break Special. I will forgo analysis of these new directions, other than to say that on the whole they seem quite intriguing, and each serves as an effective lure to check out the individual titles they represent.

However, some of the segments don’t seem to be previewing upcoming titles, but seem to be filling us in on some facets of the restored DCU.  For example, the Green Arrow and Black Canary story reveals that Roy Harper is back. He states that he is “totally back from the dead”, implying that his death in Heroes in Crisis hasn’t been negated.

This leads us into an important question about the state of the DCU. DC Universe: Rebirth  revealed that Doctor Manhattan had altered history to produce the New 52 DCU. And ever since, readers have wondered if the old pre-Flashpoint continuity would be restored. The Rebirth era restored some elements, but much of the New 52 continuity was still evident. The Flash Forward miniseries revealed that time was unravelling, with multiple versions of events existing concurrently.

So, what signs of the original pre-Flashpoint history are evident in Infinite Frontier #0, and what New 52/Rebirth changes are still around? The first sign of restored pre-Flashpoint continuity comes from the Spectre. At the start of the story, he declares, “The manipulations of your homeworld’s timeline have been undone. And time has been restored to its proper configuration”. That does sound like things have been returned to how they were before Doctor Manhattan altered history. And there is some sign of this being true in Diana’s exploration of the DCU.

The Alan Scott story shows that the pre-Flashpoint history is intact. We see pictures that seem to confirm the JSA history, including the original Infinity Inc. We get confirmation also that Alan Scott is the father of Jade and Obsidian. However, the recent retcon of Alan Scott’s sexuality, as we see Alan coming out to his children. This was quite a touching and powerful scene. And it was nice to see the story confirm that Obsidian is gay rather than ignoring or changing this facet of the character. 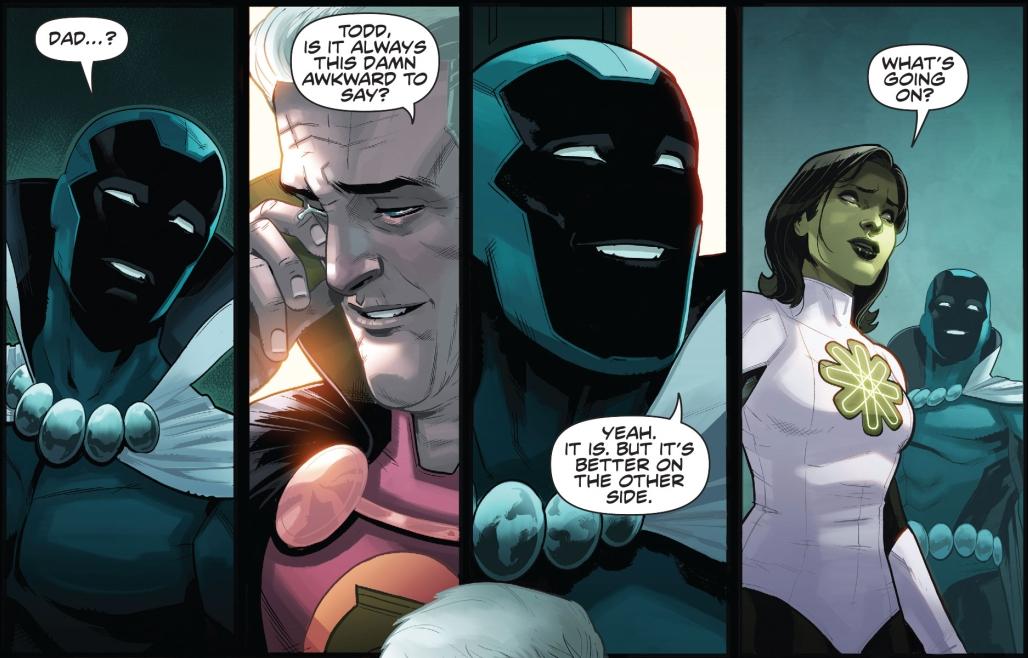 Also, the Stargirl story re-establishes an important bit of pre-Flashpoint history. In that story, we see a single panel referring to the Pat Dugan’s history in the Seven Soldiers of Victory as Stripesy. The image show that team exactly as they first appeared in the Golden Age. However, this image is also somewhat problematic, and I shall return to this in the Negatives section below.

Surprisingly, Phillip Kennedy Johnson’s Superman preview story doesn’t feature Clark Kent, but rather, his son Jonathan. For the first time, we see Jon referred to as Superman rather than Superboy. Diana calls him this, despite the Spectre declaring, “Jonathan Kent is not Superman… and must never be”. The Spectre foresees a future tyrant in Jon, but Diana has more faith in him. Jon’s actions in the story seem to bear out Diana’s assessment of his character. But the Spectre only partially concedes, stating “Superman, then…for now”.

But the Spectre does bring up an interesting point about Jon. Jon’s entire world has been uprooted multiple times. As the Spectre says, “Jonathan Kent is of no place, of no time”. I am hoping that the Kennedy has plans to eventually undo the damage that Bendis has done to the Superman mythos by restoring Jon to his proper place and time. 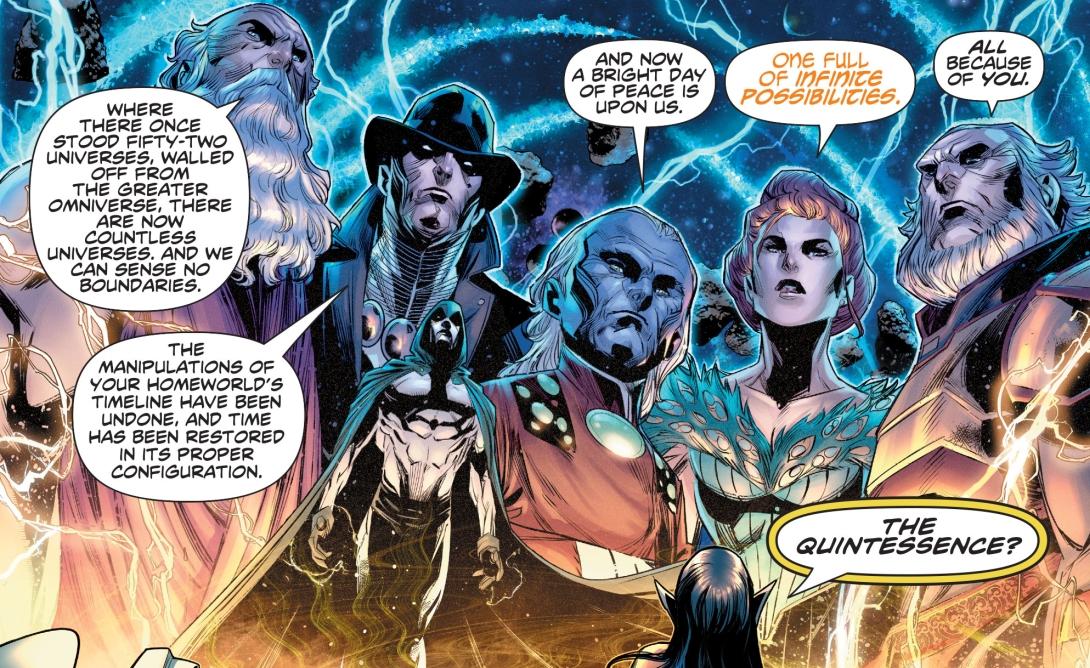 The Flash story is my favourite part of the entire book. Williamson gives an encore to his epic Barry Allen story. Justice Incarnate has asked Barry to join their team, so he asks Wally take his place as the main Flash of the DCU. This came as a relief , as DC’s solicitations for the upcoming issues of The Flash made it sound like either Barry or Wally was going to retire from the role. I love both Flashes and don’t want to see either pushing the other out of the role. Williamson’s story gives a good way for Barry to hand over the spotlight to Wally while still remaining available for future appearances.

The Flash story also reveals the name of the mysterious Earth mentioned at the end of Death Metal: Earth Omega. The epilogue entails the Quintessence travelling to this planet and encountering Darkseid. Darkseid easily defeats them, apparently killing them – although I suspect this is a fakeout. Darkseid shows himself to be a much deadlier threat than ever before. Remember, the Quintessence includes some of the DCU’s most powerful entities, including a Guardan, two gods, and the literal angel of God’s wrath.

Darkseid wields the Omega Energy and “omega” is symbolizes finality. Darkseid declares himself the ultimate omega: “This new Multiverse is now infinite. But I am finite.  I am final. Darkseid is… the end”. Darkseid has always been one of the DC’s major villains, there have been more powerful beings like the Anti-Monitor or Perpetua. But now, Darkseid has ascended to the role of DC’s ultimate threat. And it appears that the the DC heroes will be facing this threat in a new event this summer. The story’s final caption reads, “To be continued in Infinite Frontier #1 coming in July 2021!”.

The Wizard Shazam appears with the Quintessence and is presented with his original post-Flashpoint physical appearance. That is, he is shown as white, despite the fact that he was retconned to be a person of colour during the New 52. He consistently was shown as such through Geoff Johns’ recent Shazam series. Then he was Caucasian again in Justice League #39, which led into Death Metal. Then, in Future State shows him as Black again, and now in Infinite Frontier #0, he’s back to being white. Look I’m fine with either version. I think either visual interpretation is a valid choice. But for the sake of consistency, DC, can you just decide which is the official version going forward and adhere to that choice?

There was a rumour spreading online that Brian Michael Bendis was changing the character of Black Adam’s name to Shazadam. Given how stupid that sounds, it was easy for most to discount it. However, Bendis’ Justice League segment seems to back up that rumour, showing a crowd referring to him by that name. I interpreted the story as Bendis trolling us by having the mob get his name wrong. But others seem to have seen this as confirmation of the rumour. And given the number of stupid or pointless changes Bendis has made in the Superman titles and in Legion of Super-Heroes,  it might be true. After all, this is the same guy who changed Tim Drake’s superhero name to “Drake”. 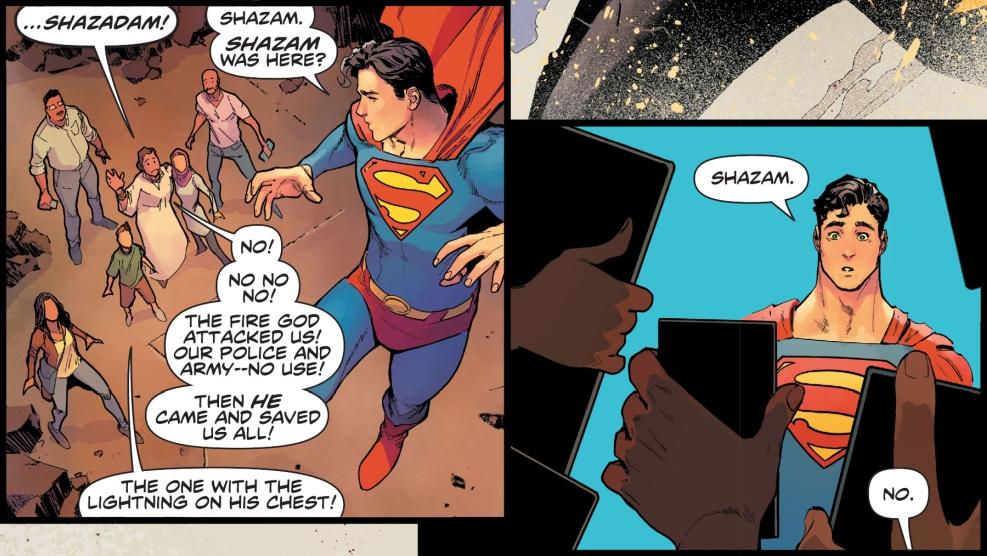 Finally, I’ll return to the image of the Seven Soldiers of Victory. The problem with this image is that it shows Green Arrow as a member of the team, wearing his Golden Age costume. If the Seven Soldiers were active in the Golden Age, that would make Ollie a lot older than he looks elsewhere in this issue. How can this be? Well, one explanation is that the main DCU is actually the Linearverse after all. Generations Forged introduced the Linearverse, where the DC characters are extremely long-lived. And characters like Superman and Batman have been active and in their prime since the 1930s.

I pray that this isn’t so, as that would introduce a ton of logical inconsistencies, which would inevitably require the DCU to have another continuity reset before long. There is also the possibility that this will prove to be a different character, who happens to strongly resemble the Golden Age version of Oliver Queen. There is a subtle hint that this might be the case. If you look closely, “Green Arrow” and his partner both have the wrong hair colour. Ollie is blond, not a redhead, while Roy is a redhead, not a brunet. Of course, that could be a colouring error, but it’s there’s a multitude of colours in that image, and Hi-Fi has absolutely nailed every one of them. I strongly suspect that the choice of colour for their hair was deliberate. I believe this is a new character taking the place of the Golden Age Green Arrow.

While there are a few worrying bits, Infinite Frontier #0 was a fascinating look at the current state of the DC Universe.  I thoroughly enjoyed every page of it. The previews of upcoming storylines brought back fond memories of the DC Sampler specials from the 1980s. I am eager to see how these stories play out in their individual books. And I can’t wait to see how DC’s heroes fare against Darkseid in this summer’s Infinite Frontier event.

Boom! Studios Review: Something is Killing the Children #15