Batman #106: Following the tragic events of Infinite Frontier #1, Batman and his new ally, Ghost-Maker, must reckon with a new gang operating in Gotham City—but are they connected to the re-emergence of the Scarecrow? Meanwhile, shadowy billionaire Simon Saint pitches an advanced law-enforcement system to the new mayor! The creative team behind the epic “The Joker War” returns with a thrill-packed, dangerous new storyline called “The Cowardly Lot.”

Batman #106 follows out of Infinite Frontier #0. In that special, we saw a vicious attack on Arkham Asylum, presumably perpetrated by the Joker. We don’t know the details about who did or didn’t survive, but there is a brief mention that “Arkham has fallen”. I doubt that any of Batman’s rogues perished in the fire, except perhaps Bane, who apparently was killed. I would guess that many of them are now at large in Gotham.

We also see Simon Saint attempting to sell Gotham’s mayor on his proposal of a group of “Peacekeepers” to fight supervillains and other extra-normal threats. This is quite clearly the genesis of the Magistrate from Future State. Mayor Nakano seems unimpressed, but it seems that Saint has allied with the Scarecrow to change the mayor’s mind.

It’s only expected that we would start to see the seeds of Future State start appearing in the current titles. What will be interesting to see is if things will keep progressing inevitably towards that future timeline, or if other occurences will divert DC history in other directions.

We also finally get a better look at Batman’s world post-Joker War. Oddly, Bruce seems unfazed by his reduced circumstances. It does pose some financial limitations on his crusade against crime, but he gamely applies his ingenuity to deal with these limitations. For example, we find that he’s cannibalized parts of old Batmobiles to keep the current one going.

I liked seeing Bruce and Ghost-Hunter’s partnership. Despite Bruce’s admonitions to not kill or maim criminals, Ghost-Hunter is obeying Bruce’s wishes so far. But Bruce seems to be enjoying this partnership, which usually is a good sign that it’s not going to last. I did notice that Ghost-Hunter seemed absent from Future State. And that leads me to wonder what happened to him between now and that future time.

And finally, we get to see Bruce’s new digs. Well, we see the exterior of the townhouse, and the garage, which is filling in for the Batcave. Hopefully, we’ll get to see more of Bruce’s new home in his stead.

Also, we get our introduction to James Tynion IV’s latest character creation: Miracle Molly. Unfortunately, we don’t see enough of her to make any judgements yet. But at least DC is refraining from declaring her a breakout star before she even debuts, as they did with Punchline. I look forward to learning more about her and finding out how she measures up.

This issue, there is also a backup feature starring Damian Wayne. This is the first of a two-parter that continues in Detective Comics #1034 and leads into Joshua Williamson’s new Robin series. 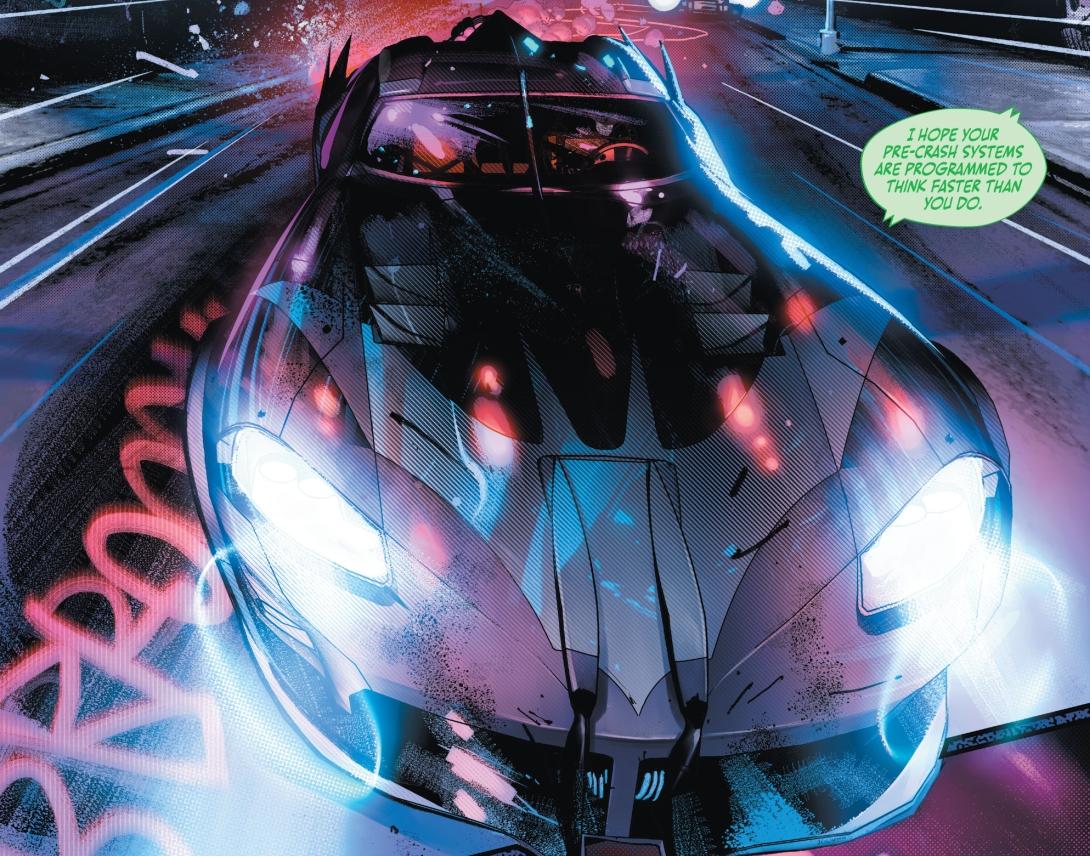 We see Damian seeking out his mother, Talia Al Ghul, to resume his place as the heir to Ra’s Al Ghul. It is interesting that Damian’s interpretation of events doesn’t quite match that of his mother. Damian believes that he has freed himself of the influence of his father and has returned to claim his rightful place at his grandfather’s side.

However, Talia disagrees. She states, “It’s disappointing you finally return in defeat… You have no resources, no money, no home… Like a baby bird who tried to fly on its own too early, you went crashing down to the Earth”.

However, their discussion is interrupted by an attack from assassins calling themselves “the League of Lazurus”. I wonder if they are an offshoot of the League of Assassins or some rival group. Neither Damian nor Talia seem to be familiar with them, so they’re a mystery for now.

The story ends with Damian having to choose between killing one of the assassins or allowing him to kill Talia. The final panel implies that someone dies, but not who – or who killed them. This decision could represent a break between Damian and one of his parents. If he kills the assassin, then he breaks his father’s ultimate rule: no killing. But if he doesn’t kill him, it might mean the death of his mother. Of course, Talia could feasibly have killed her would-be assassin.

While it’s interesting to see the seeds being sown for Future State, I’m not entirely convinced it’s a good thing. I hope that the dystopian future that we saw for Gotham is not inevitable. While it would be interesting to see some of that future be realized in the present, I hope that it is diverted into a brighter timeline. Also, given that the DCU operates on a sliding timeline, will we ever even find out for sure what Gotham’s future holds?

Batman #106 is the perfect jumping-on point for new readers (but check out Infinite Frontier #0 first). Tynion already had my full attention, but this issue has me eager to see what Tynion has up his sleeve for the months ahead.