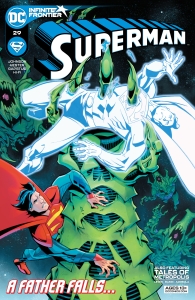 Superman #29: Writer Phillip Kennedy Johnson jumps from DC Future State back to the present for a two-part story that spans Superman and Action Comics this month!
In “The Golden Age,” Jonathan Kent steps back to examine his father’s legacy. When a monstrous foe from outer space attacks Clark-and nearly kills him!-this young hero must consider the fact that his father died once before, and the Legion of Super-Heroes told him he could die again. Any threat could be the one-including this one!

And in the new backup “Tales of Metropolis” story, writer Sean Lewis (DC Future State: Superman of Metropolis) and artist Sami Basri (Harley Quinn) follow Jimmy Olsen on a quest to meet of some of the city’s more colorful denizens, beginning with Bibbo Bibbowski!

Infinite Frontier #0 gave previews of upcoming events in a number of DC titles. The section pertaining to the Superman titles gave the impression that incoming writer Phillip Kennedy Johnson would be focusing more on Jon Kent. That story even referred to Jon as Superman, not Superboy.

And Superman #29, bearing DC’s new Infinite Frontier trade dress on it’s cover, picks up that thread. While Jon and his father combat an alien threat, the narration talks about the “golden age” at which children see their parents as immortal and an eternal presence. And it also tells us the painful loss of innocence when they realize that their parents are mortal.

How this relates to Clark and Jon’s current situation becomes evident when Jon reveals that he knows from his time in the future exactly when Superman will die. And unfortunately, that time in now imminent. This is seeming to imply that the torch is about to be passed on to Jon, making him the new Superman.

So, is DC on the verge of another “Death of Superman” story? I have my doubts that DC would kill their flagship character off. However, it might be interesting for them to take the focus off the father and make the son the star of Superman and Action Comics for a while. Future State implied that Superman might be soon shifting his attention off-planet, leaving Jon to become the Superman of Earth. 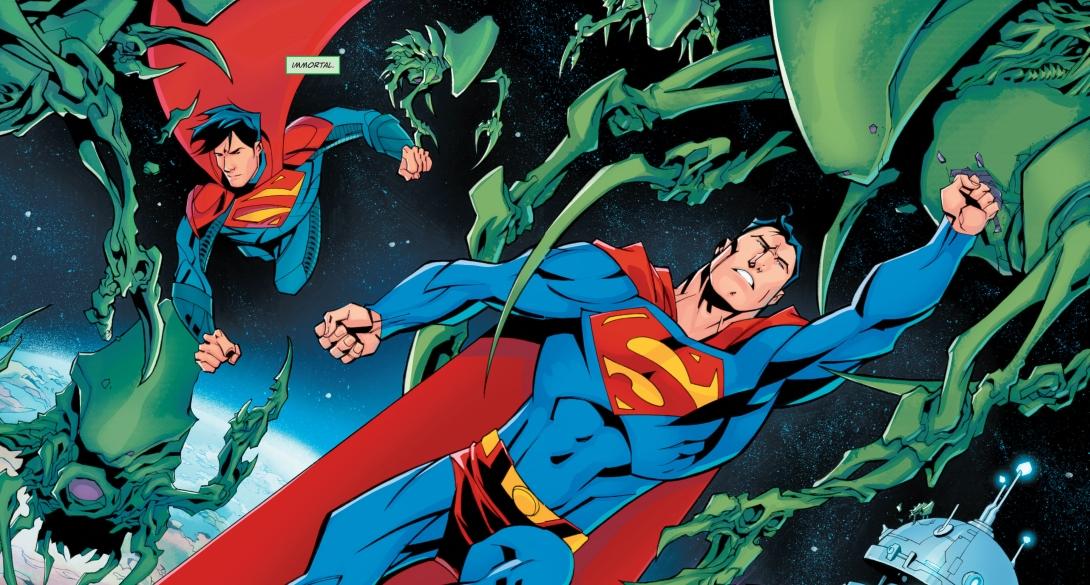 I suspect however, that Johnson might be taking the story in another direction, subverting the expectations that Future State has laid out. While it seems that Jon will be the central character of the title, I don’t think that’s a permanent change. Things will return to a previous status quo.

The art of Phil Hester and Eric Gapstur was a refreshing change of pace. It’s a bit different style, which helps futher differentiates the Infinite Frontier era of Superman from the Bendis era. I found that the art, especially in the case of the monochromatic green aliens, to be reminiscent of the pre-Crisis era of Superman comics, which I quite enjoyed.

Superman #29 also includes the first installment of “Tales of Metropolis”. This feature is narrated by Jimmy Olsen who tells us of Bibbo Bibbowski’s disastrous date. The date turns out to be a ruse by two alien villains as part of their plan to attack Superman through his friends.

I hope this backup feature lasts for a while. Jimmy hasn’t really gotten much time in the Superman books recently. But his recent miniseries, Superman’s Pal Jimmy Olsen, was a blast. I would love to see some of that title’s weirdness reflected here.

I was hoping that whoever followed Brian Michael Bendis as writer of the Superman books would immediately undo Bendis’ greatest mistake and immediately de-age Jon back to being a ten-year-old. The father-son dynamic of the Superman under Peter J. Tomasi was perfect, and Bendis’ destroyed that in service of his Legion of Super-Heroes reboot.

However, it does seem that Johnson is aware of how great that dynamic was. The scene where Clark tries to engage Jon in a childhood game that his son has long forgotten is poignant. It is heart-rending seeing Clark’s realization that although Jon’s childhood days were weeks ago for him, they’re in the distant past from Jon’s perspective. This makes me hope that perhaps Johnson might eventually restore things back to how they should be for the Kent family. Or failing that, at least he’s giving that lost dynamic the respect that Bendis didn’t. 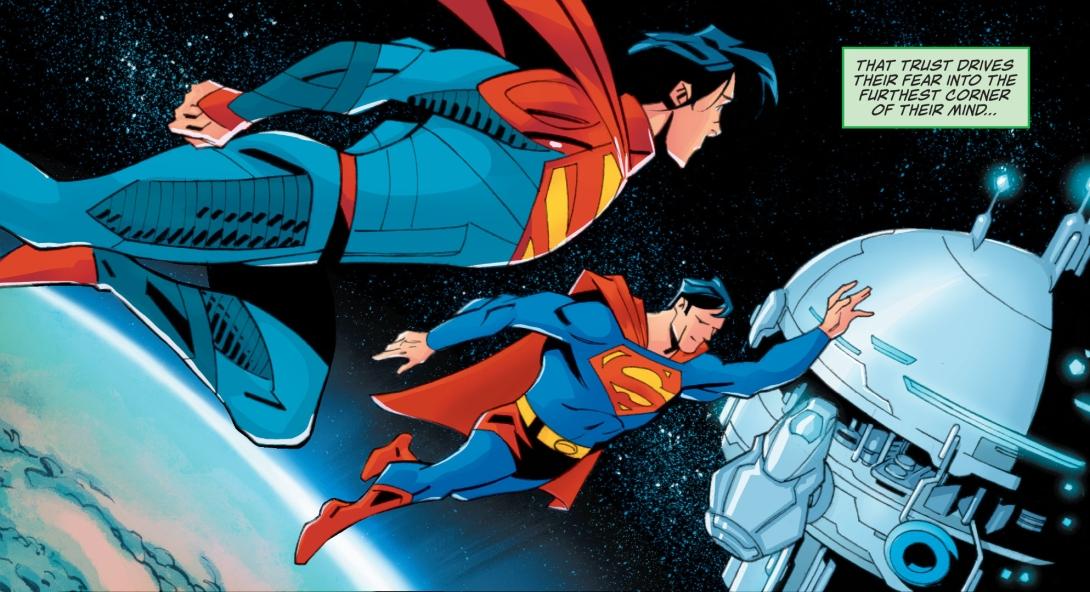 While I was quite happy to see more of Jimmy in the backup story, I can’t really say the same about Bibbo. Bibbo is a character best used sparingly, as he gets annoying quite quickly. Hopefully, Jimmy’s “Tales of Metropolis” will focus on different co-stars as it progresses rather than keeping Bibbo as a regular. I wouldn’t be adverse to seeing Bibbo return in the future, but I wouldn’t want to see him as a constant presence.

Superman #29 is an auspicious start for the Infinite Frontier era of the Superman titles. Phillip Kennedy Johnson’s first full story hits all the right notes. I look forward to seeing what he has in store for the two Supermen. I also look forward to seeing Sean Lewis exploring Superman’s supporting cast in future installments of his “Tales of Metropolis”.