Wonder Woman 1984 Lassoes SAG award this year at the 2021 Screen Actors Guild Awards.  She took home the Outstanding Action Performance by a Stunt Ensemble in a Motion Picture.  While Wonder Woman 1984 garnered the award, the other candidates for the award were Da 5 Bloods, Mulan, News of the World, and The Trial of the Chicago 7.  It’s the first time since the category was created in 2008 that two female-led films are nominated in the same year.

What is Wonder Woman 1984 about?  Diana Prince lives quietly among mortals in the vibrant, sleek 1980s — an era of excess driven by the pursuit of having it all.  Though she’s come into her full powers, she maintains a low profile by curating ancient artifacts, and only performing heroic acts incognito.  But soon, Diana will have to muster all of her strength, wisdom and courage as she finds herself squaring off against Maxwell Lord and the Cheetah, a villainess who possesses superhuman strength and agility.

SYFY WIRE had an interview with the stunt coordinator, Rob Inch , and here is how the interview went:

“It’s great that the Screen Actors Guild recognizes stunt ensembles, but shouldn’t more awards ceremonies do the same, given that your people literally put their lives on the line? Why not the Oscars?” 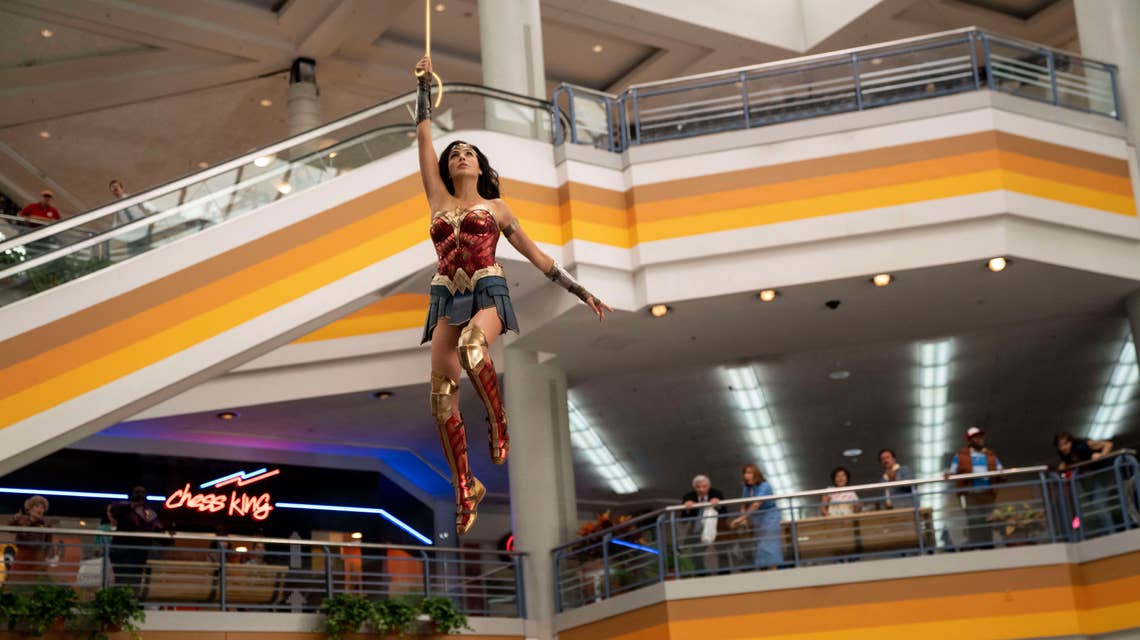 “Yeah, it feels strange. As my children point out to me, I land on my head for a living.  Every other department gets recognition, and rightly so, but it feels odd that we’re maybe the only department that doesn’t.”

“Let’s talk about the film’s spectacular opening sequence. What were your initial discussions with director Patty Jenkins like in order to help the Amazons stage their Olympic Games?”

“We probably spent four to five months in prep.  I remember going on YouTube and looking at X Games and Red Bull athletes and going, “How can we use that piece?  How can we stretch it?” So like the run-up-the-wall back-flip, we turned that into a run-up-the-wall back-flip with a high jump in it.  We also had input on how that stadium was designed, for the start of the obstacle race.  I needed steps for these girls to run out.  We needed poles for them to flip. Those things were not a proxy set. They were built at the actual heights, like up to 15 meters.”

“You had to stage the mall stunts in a real location, with a glass atrium surrounded by escalators. And you’re doing wirework. How did you manage that?”

“I took three trips to the Landmark Mall to figure it out. When you do something like that, normally you do it on a 60-foot soundstage that has steel beams running through it, so you have something to rig from.  This is a shopping mall. It’s a glass atrium. It actually had four columns running up through it that we managed to saw into, and we put in a 3D flying rig so you could fly in that bubble. I think we had something like six kilometers of cable lines running in there, to let Wonder Woman fly around one post and then the other. It was a feat of engineering.”

“You did a Texas Switch to achieve some of those leaps over the railings, right?”

“We would do the full move with the stunt double, and then just rewind a bit and make sure we landed Gal Gadot in a believable move. We did do a Texas Switch, but we did it with two stunt doubles.”

“There’s a piece where Wonder Woman lassoes the two guys and then jumps over the balcony. Those guys crash together, and she swings on through. We jumped one double off the top floor, and then as we came over the top, another one came swinging through, so we did a switch with two doubles because we wanted to see a continuous slice.”

“It’s almost like she’s flying before she’s able to fly.”

“That’s the beauty of the lasso. Then she could swing around a corner and actually redirect herself, so she can jump off one angle and fly at another angle.”

“As Cheetah, this was Kristen Wiig’s first time really doing stunts and wirework, and she had to do them while incorporating a feline sensibility…”

“There was a lot of talk about whether we’d work with prosthetic legs or do stilts, but it came down to Kristen feeling the character out and having good stunt doubles.  I think we devised a nice fight at the White House.  Maybe there is some enhancement with CG, but every part of the Cheetah fight is real.  Wonder Woman getting smashed through that column? That’s real. Cheetah diving at Wonder Woman and doing a corkscrew 360? That’s a wire move.”

“[For] the finale fight, Patty Jenkins had seen a Cirque du Soleil show, and she said, “I’d like something that has an aerial feeling to it.” We found a couple of aerialists, and they did some of the beginning of the film, too.  Normally they would be connected to a wire that would pick them up from their hips, and that movement would take a path that would always repeat itself.  This never had that.  We did a 3D system that basically flew a gimbal above their heads, and we could drop in cables and swing that around.  So it was basically swinging them like one of those fairground swinging chairs. It became a lot less choreographed, more raw and organic.” 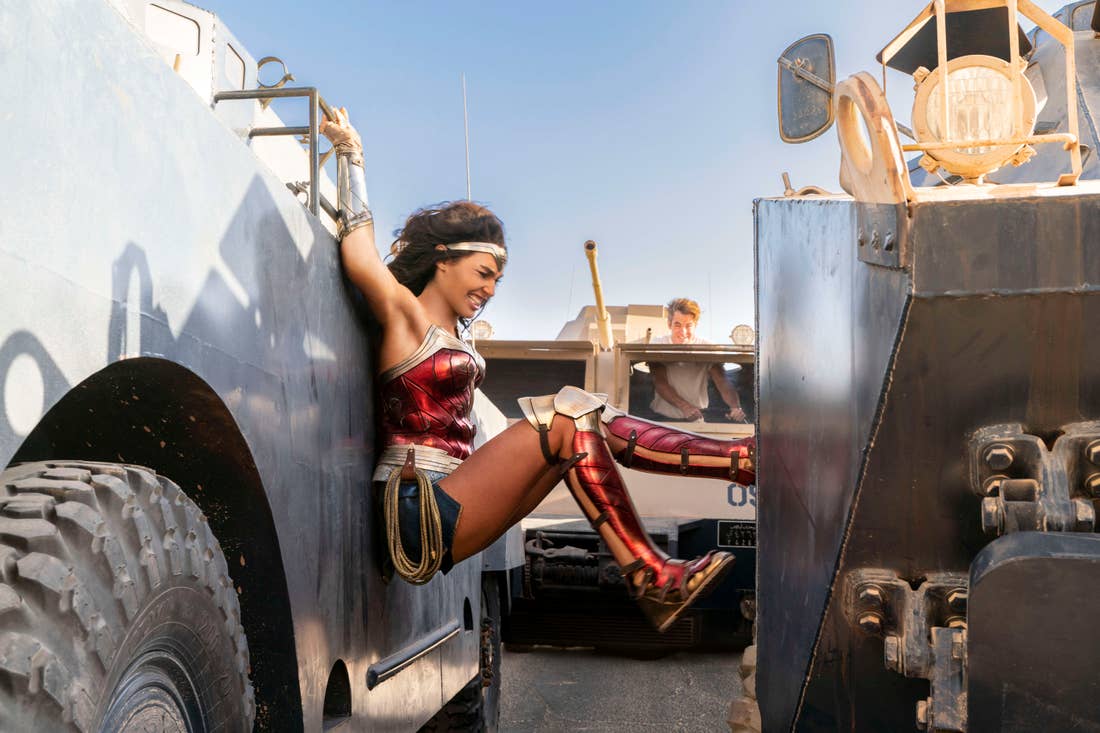 “What about the whole Cairo chase sequence? The convoy scene when the truck flips and Wonder Woman flies through the air? Wonder Woman wedged between the side of the trucks as they’re traveling along the road?”

“The truck that did the 360, that was real. The idea was that it was supposed to go ’round onto its roof, and the first time it did, it did a full 360, back onto its wheels! We liked that, so we used that. All those vehicles in that convoy and around that truck doing the 360, they were all there.  Jumping from one vehicle to another, the vehicles can run at whatever speed you need.”

“The kids in the open road, there was a big 3D winch system, and we flew the stunt double in to pick the kids up, and then we did an overlap of Gal doing that move.  Those kids, it was the first time they’d ever been in a movie, and we’re telling them, “We’re going to pick you up in a harness, and you need to look over your shoulder and pretend a car is going to run you over.” Then all of a sudden Gal Gadot is sweeping you off your feet! The little boy was smiling the whole time. He was having the time of his life.”

“So maybe that didn’t teach him not to play in the road. Why is that movie kids don’t seem to notice oncoming traffic with lots of gunfire? You’d think they’d stop playing ball for a moment?”

“If you see a big tank coming, and someone shooting at the top of it, get out of the way!  That football always goes in the road when a convoy is coming that way, doesn’t it?  Weird how that happens. [Laughs.]”

As Wonder Woman 1984 lassoes SAG AWARDS for Outstanding Action Performance by a Stunt Ensemble in a Motion Picture, the Screen Actors Guild honored other movies. dramas, and actors:

Outstanding Performance by a Cast in a Motion Picture
WINNER: The Trial of the Chicago 7

Outstanding Performance by an Ensemble in a Drama Series
WINNER: The Crown

Outstanding Performance by a Female Actor in a Drama Series
WINNER: Gillian Anderson (The Crown)

Outstanding Performance by a Male Actor in a Supporting Role
WINNER: Daniel Kaluuya (Judas and the Black Messiah)

Outstanding Performance by an Ensemble in a Comedy Series
WINNER: Schitt’s Creek

Outstanding Performance by a Female Actor in a Television Movie or Miniseries
WINNER: Anya Taylor-Joy (The Queen’s Gambit)

Outstanding Performance by a Male Actor in a Television Movie or Miniseries
WINNER: Mark Ruffalo (I Know This Much Is True)

Outstanding Action Performance by a Stunt Ensemble in a Comedy or Drama Series
WINNER: The Mandalorian

Wonder Woman 1984 was released on HBO Max, Christmas 2020; it is currently available for Blu-ray and digital download through Google Play and Microsoft Store.

Trailer Lands for Batman: The Long Halloween Part One