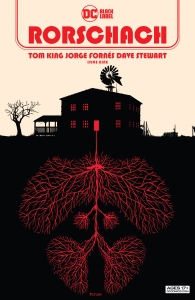 Rorschach #9: The detective has found where the source of this tragedy began. Where Laura learned to shoot, a place where she not only learned to kill but also has killed, and where she brought Rorschach to turn him into an assassin as well. As the timelines crisscross, the man trying to undo this mess only falls deeper into it.

In Rorschach #9, Tom King’s unnamed detective protagonist explores the desert property where Wil Myerson and Laura Cummings prepared for their attempt to assassinate a presidential candidate.

This issue heavily relies on a device seen in earlier issues. The story jumps back and forth between the past and present, but the panels are set in the same location. This allows two timelines to flow together smoothly. Thus, the events of the two timelines form a single narrative. This is brilliantly planned by King and beautifully carried out by Jorge Fornes. This really demonstrates how in sync the creative team is to pull this off so seamlessly.

I find it telling that in each timeline, the detective is shown in the same place and in the same position as Myerson (as Rorschach) in the past. There is clearly a connection being drawn between the two. Is this because the detective is trying to think like Myerson to solve the mystery? Or is King hinting at some deeper connection? 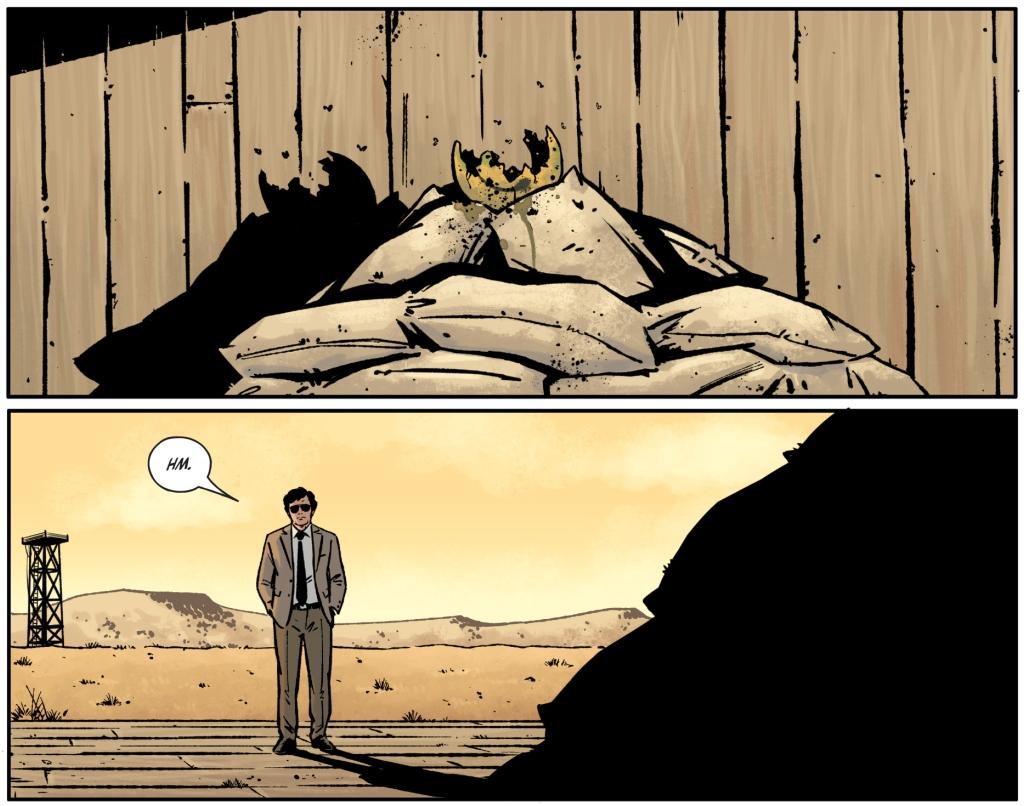 At this point in the past narrative, Myerson is totally buried in the Rorschach persona. There is only one instance where we see him not wearing the mask. And for some reason, it seems jarring, despite the fact that we know that it’s Myerson under the mask. But it just seems wrong – almost unnatural. And Myerson quickly puts the mask back on, as if he feels the same way.

We also see Laura Cummings (as The Kid) in the present. She is presented as if she is actually there, even though we know she can’t be. The detective even talks to her directly. It might be that imagining her is aiding the detective in figuring out what she and Myerson is up to. Or could he be hallucinating? If he is, he seems well used to seeing the hallucinations, as he does not seem the least bit concerned or surprised by her presence.

Or is she actually there in some mystical or supernatural sense? At one point the detective asks her a direct question about whether there is a phone in the house, which she helpfully points out. It could be he already knew this and was just giving his imaginary scenario a bit of verisimilitude. After all, he was directly facing the wall the phone was hanging on. But it’s strange. It seems like an odd exchange, either way.

It’s also notable that he doesn’t picture Myerson as present. This is because, as noted above, the detective is in the place of Myerson. It’s also worth noting that earlier in the series, the detective was seeing (or imagining) Rorschach with The Kid. But now he’s in the place of Rorschach. The two seem to be merging into one, which I think is a big hint about where this series is headed. 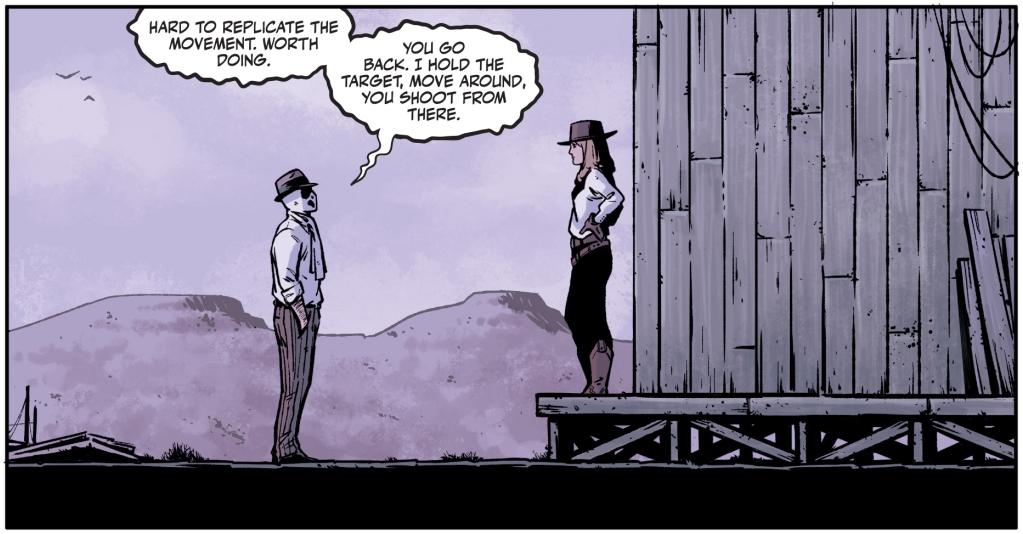 I stated my theory about how the story is going to conclude in an earlier review, but I will restate it here. I think that the detective is going to end up taking on the role of Rorschach himself and will also take on the mission to assassinate Governor Turley. King hasn’t told us the detective’s name, because his true name will be the name he takes at that point: Rorschach. And King will leave us wondering if the detective fell under the same delusion as Will Myerson, Frank Miller, and others in this series or if somehow the soul of Rorschach actually does live on through him.

Or I could be way off base and the King’s actual ending will come as a complete surprise. But with only three issues left, we shouldn’t have to wait much longer to find out.

I’m at a loss to find anything wrong with King’s story. And this issue seems especially painstakingly crafted by King and Fornes.

Rorschach #9 is another brilliant chapter in this astounding series. King has written some damn good stories, and this series is no exception. Hopefully, he can deliver a satisfying conclusion to the story, and I have every confidence in his ability to do so.