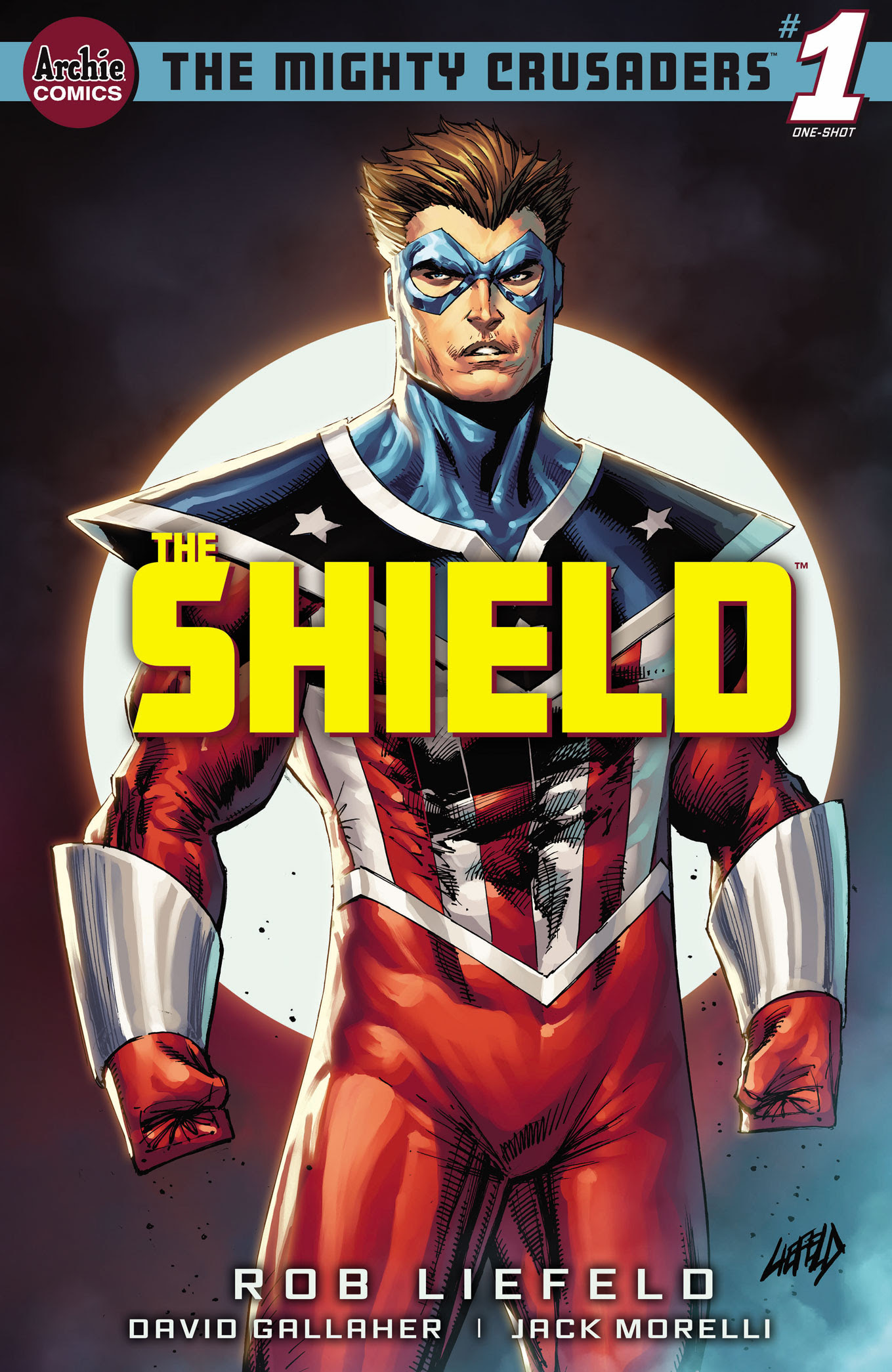 As a long time fan of the MLJ/Archie Adventure/Mighty Comics/Red Circle/ Impact Comics/Dark Circle characters, the very existence of The Mighty Crusaders: The Shield #1 is cause for excitement.  There hasn’t been an incarnation of these characters that hasn’t stirred me since I first discovered them back in 1983 when I picked up The All-New Adventures of the Mighty Crusaders #2 new off the stands.  I had no idea of the history of the characters at the time and now that it’s been another nearly forty years, there’s even more history to fold into the characters.  This might be the most single pleasing aspect of The Mighty Crusaders: The Shield #1.  This issue takes into account ALL the myriad version, reboots, alternate takes.  While it is not wholly inclusive, it acknowledges that there have been multiple versions over the past 81 years since the Shield’s debut in Pep Comics #1. 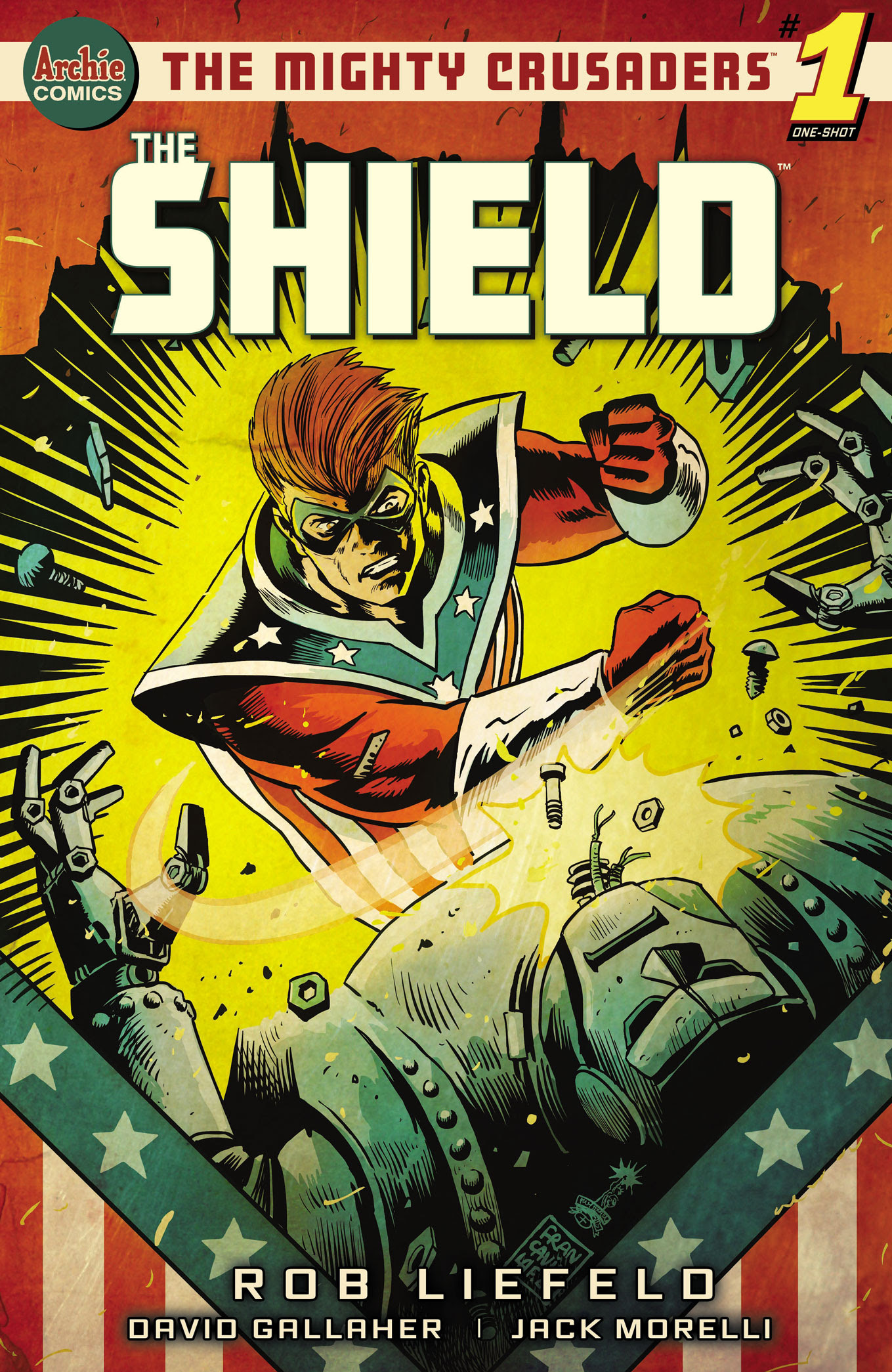 While the title of the issue makes it clear that The Shield is the star, it isn’t clear that the original version may not be the true hero of the tale.  That’s left unclear as we not only see the Impact Comics version amongst others, but also the more recent Dark Circle version, Victoria Adams- Daughter of the Revolution.  While many of the incarnations of these characters were never developed into their potential, the Dark Circle versions are probably the poster child of unrealized potential.  The Dark Circle version of the Web never even saw print!  But, what a great concept it was!  Victoria Adams is one of those concepts that breathed new life into a classic character while not treading over the original.  She’s a real treat to see here and it’s a real joy to think that she’s got a future and not just unrealized potential. 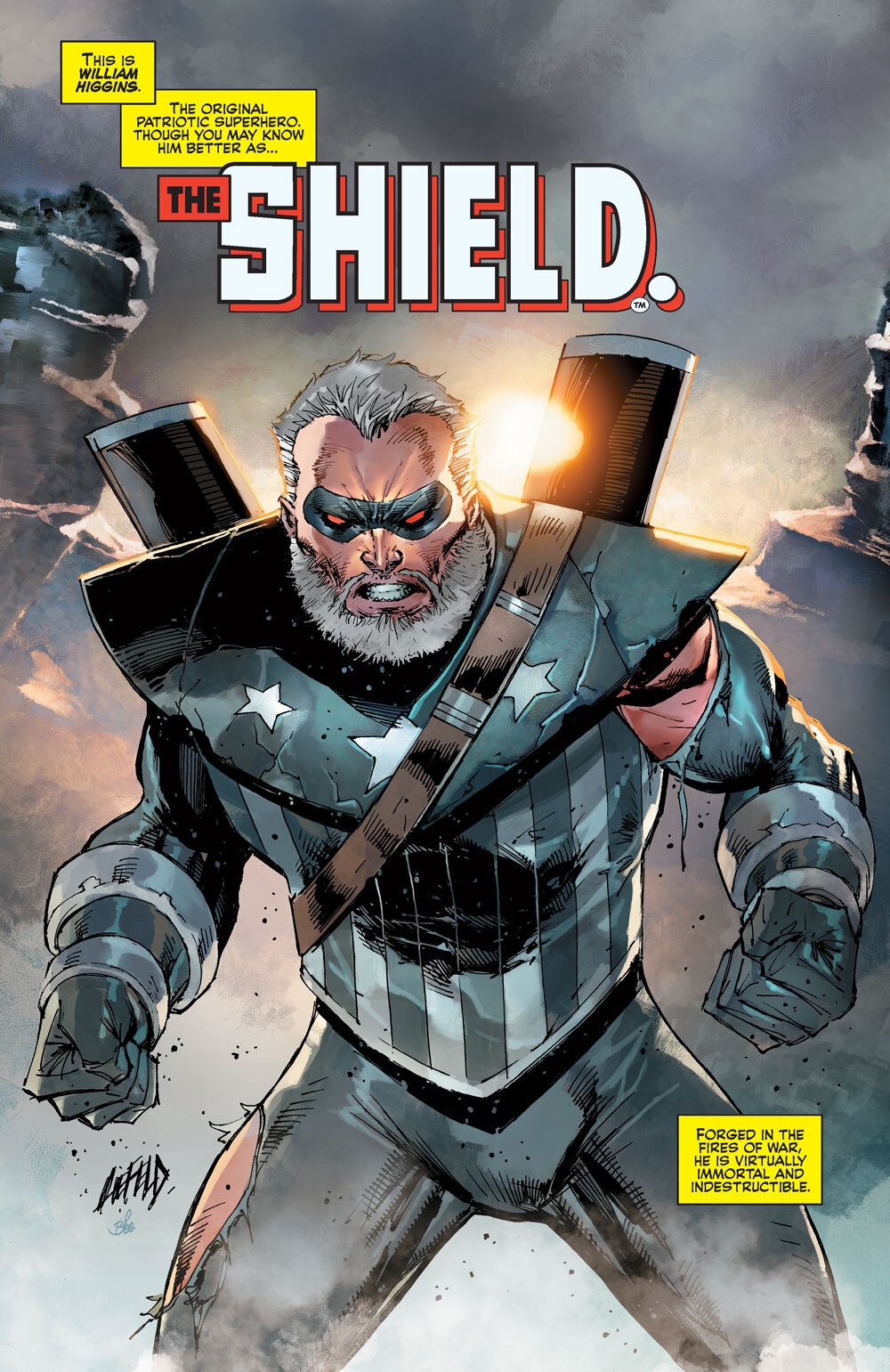 So how are all these versions joined together?  Well, without being too spoilery, I’ll just leave it that The Mighty Crusaders: The Shield #1 does seem to promise a sorting out of all these incarnations. 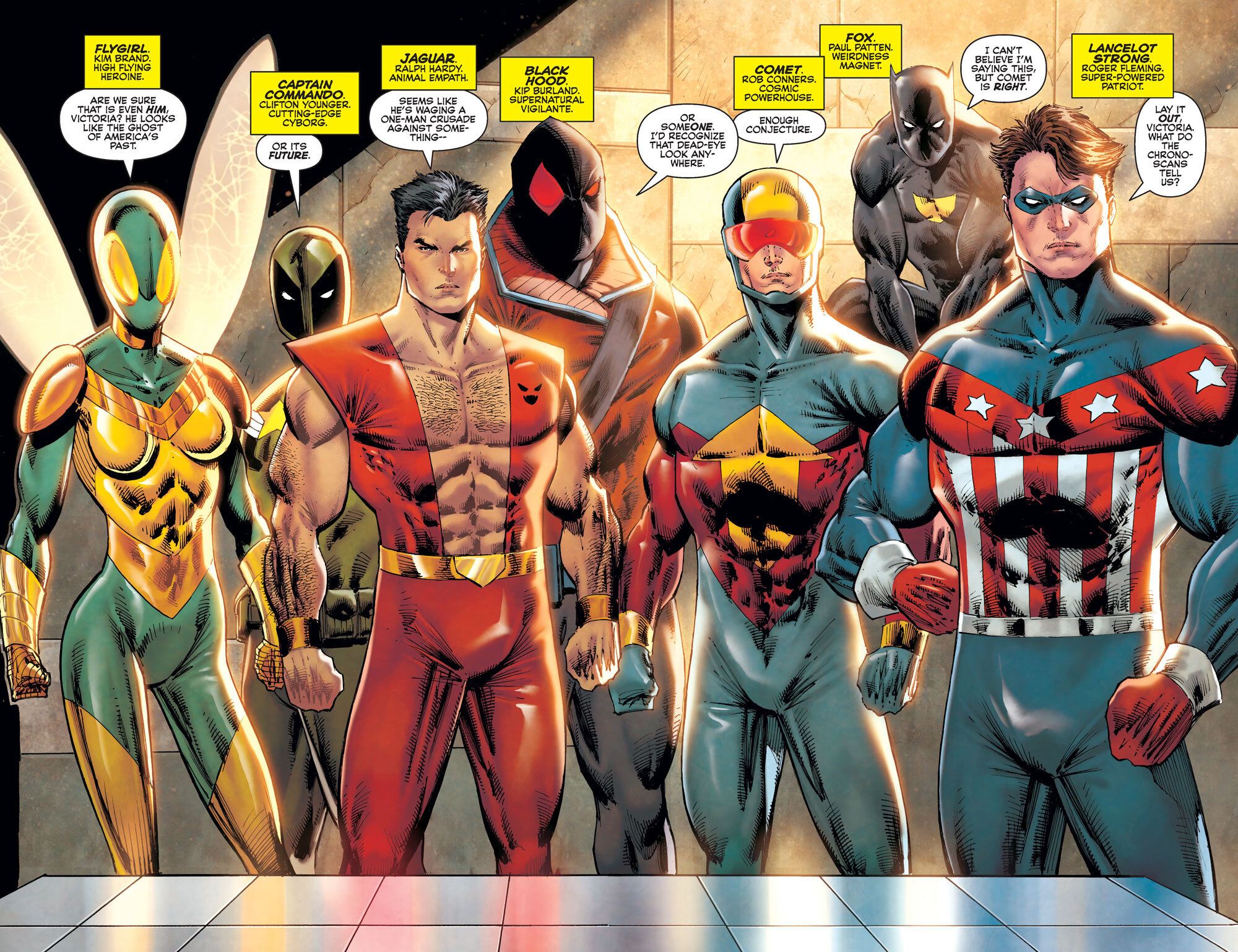 As for the story itself, it is tinged with mystery, but it is mostly a character analysis of the Impact Comics version of the Shield as well as a bit of a treatise on the concept of the character in all it’s incarnations including a truly obscure reference to the Canadian version!  It works well enough, and Rob Liefeld’s art isn’t over the top like it could be.  It feels like there’s some restraint on his part at work and it serves the story well.  He captures the visual essence of each individual character with perhaps a nod to their appearances in their native iterations. 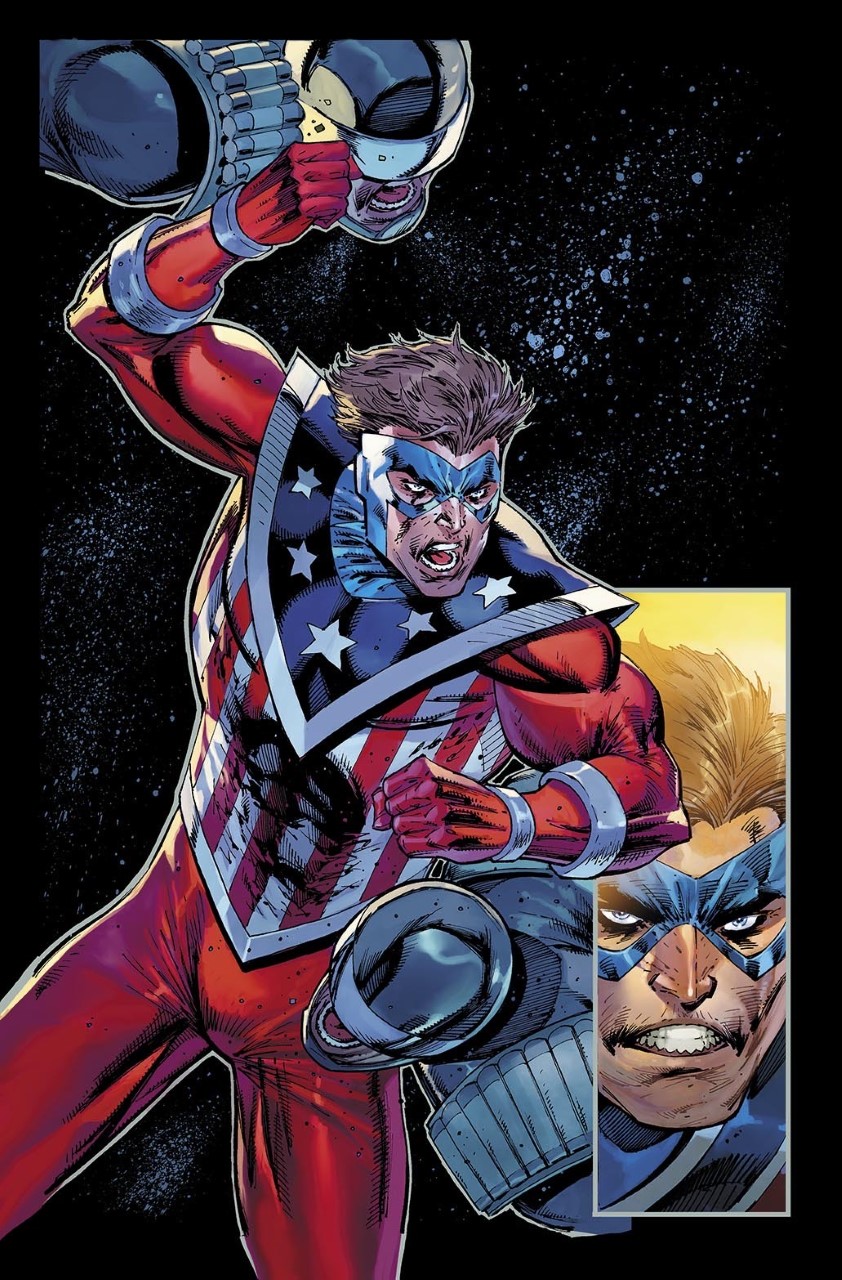 The controversy surrounding the dismissal of Liefeld of scripting this issue hangs heavy.   While it’s not really clear what Liefeld’s script included that Gallaher has eliminated, one can’t help but wonder how different it would be.  Gallaher’s script reads like a love letter to the characters, so what did Liefeld intend? At some point this will come out, surely.  But for now it simply is what it is. 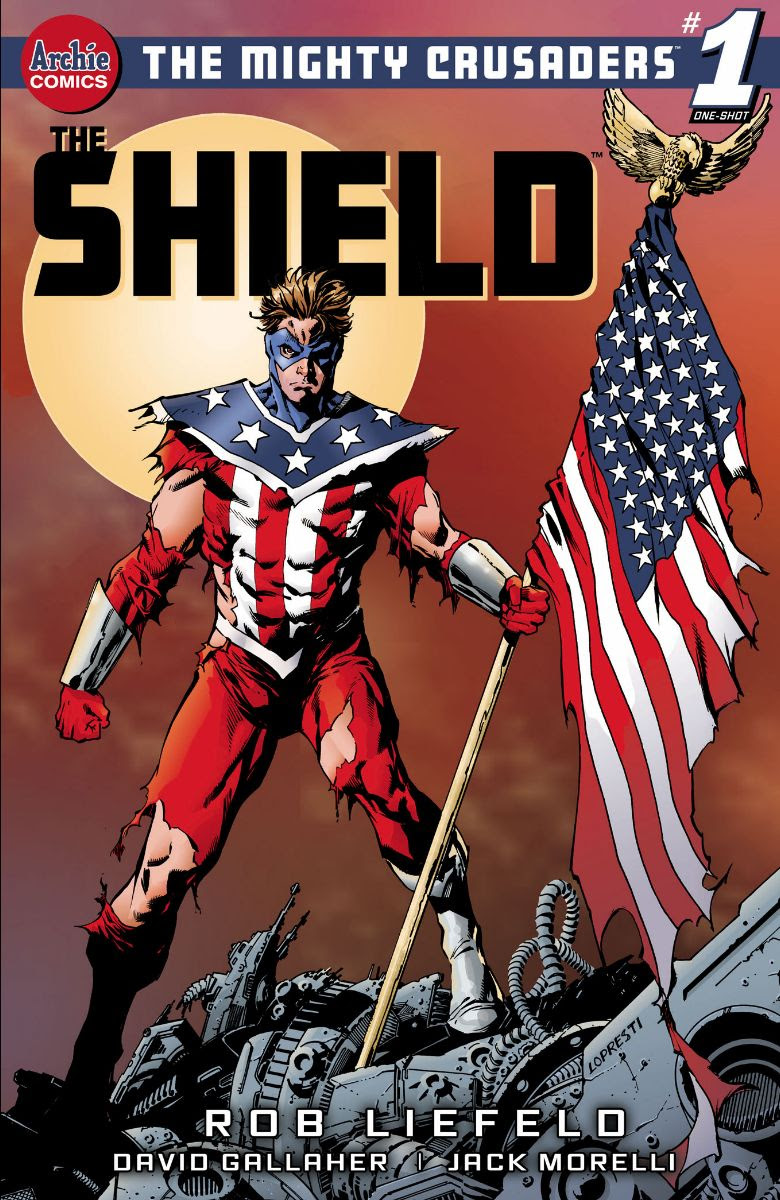 There is the unfortunate sense that despite an mysterious epic event being imminent, this could be it for these characters until the copyright needs to be reaffirmed.  It does leave one with a real taste of the unfinished.  And, that’s the most serious negative…Is this it?  Surely, there will be more…soon?  Hopefully?  Please?

The Mighty Crusaders: The Shield #1 promises a lot and delivers on just enough to be good starting point.  Rob Liefeld’s story and art introduces the new reader while not overwhelming.  This overall approach allows the reader to focus on one character and one concept while at the same time understanding there’s a lot of history behind these characters.  It’s a good entry point for readers unfamiliar with any version and a fun bit of nostalgia for those with some level of previous knowledge.  Let’s all go out and buy this so Archie Comics will continue the series!