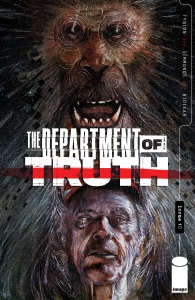 The Department of Truth #10: Some fictions manifest in reality as dangerous, half-formed things. The Department of Truth relies on hunters to track down and contain these wild tulpas before they become too real. It’s time for Cole Turner to see this side of the job firsthand. It’s time for Cole Turner to join his first Bigfoot hunt.

In a title like this, where conspiracy theories and urban legends can become real, it was inevitable that Tynion’s story would involve Bigfoot at some point. Hawk Harrison continues his mentoring of Cole Turner by introducing him to Darla, a ranger with the Department’s field office. Darla is tasked with hunting down and removing “wild fictions”.

Tynion has established a world that can be molded by belief. If enough people can be made to believe in something strongly enough, it will become fact. Past issues have explored some of the ramifications of a malleable reality. In The Department of Truth #10, Tynion reveals the effect that one individual can have if he fervently believes in something that isn’t real.

As Hawk puts it, “In our line of work, you need to believe in something to make it real, and you’ve got to believe real fucking hard to make something that doesn’t walk the Earth, walk the Earth. But… here’s the flipside… For all of recorded time, there have ben stories about people encountering some weird fucking shit. We call them wild fictions”. Darla expands on this, naming the three types of fictions. First is the hauntings, which encompasses intangible things like ghosts and demons. Second is close encounters, which includes, aliens, UFOs, and angels. And third is the “critters”, which Darla indicates is a softer term for “monsters”.

The latter group is the most dangerous, because people start believing they’re real, living creatures. Interestingly, Tynion has Darla reveal why we never see clear photographic or video evidence of Bigfoot, UFOs, or ghosts. She relates, “Reality works a little different around a fiction. When you look at one, you’re looking at something that doesn’t quite exist…That’s why you can’t take a clear picture of them. Best you get is a blur, and even that is rare”. 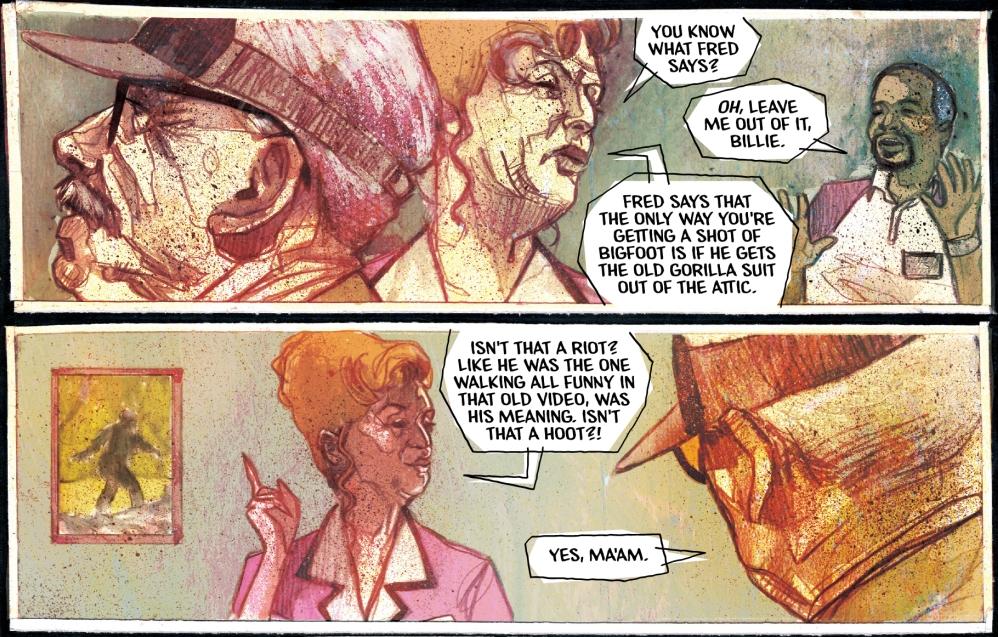 This is the kind of detail that makes you briefly wonder if maybe our reality works like the one Tynion has laid out in this series. It does seem like a logical explanation why there never seems to be any clear evidence, despite many reports of unexplained phenomena. It seems non-sensical on the surface to accept that reality the same as in this story’s universe. But if it did, would we actually know? And would such a universe be better or worse than one in which reality was firm?

Hawk goes on to explain that an encounter with one of these fictions is akin to a religious experience. He states, “You encounter a thing made of pure belief, you kind of internalize that. Then you pass that belief onto others… That’s why the wild ones are so dangerous. This is the sort of shit that makes men build religions. It creates a kind of zealotry”. And as we know, the larger a belief grows in this universe, the more real it becomes.

The story also involves a sasquatch hunter named Evan. He fervently believes in Bigfoot, and we see him exploring in the same area where Darla is hunting. And Darla makes it clear what has to be done with people like Evan, “Yeah, kid. I kill them”. It appears that Cole is about to become complicit in another murder for the Department of Truth, which is likely to add to his doubts about whether or not he is on the right side of their conflict with Black Hat.

Martin Simmonds’ artwork is fantastic. I’ll admit that I wasn’t quite sure about his style at first, but it’s perfectly suited to Tynion’s story. The abstract edge helps express the fuzziness of reality in this universe, yet it perfectly captures the mood in every scene.

I am absolutely loving this book and have yet to find any faults with it. It’s pure brilliance. 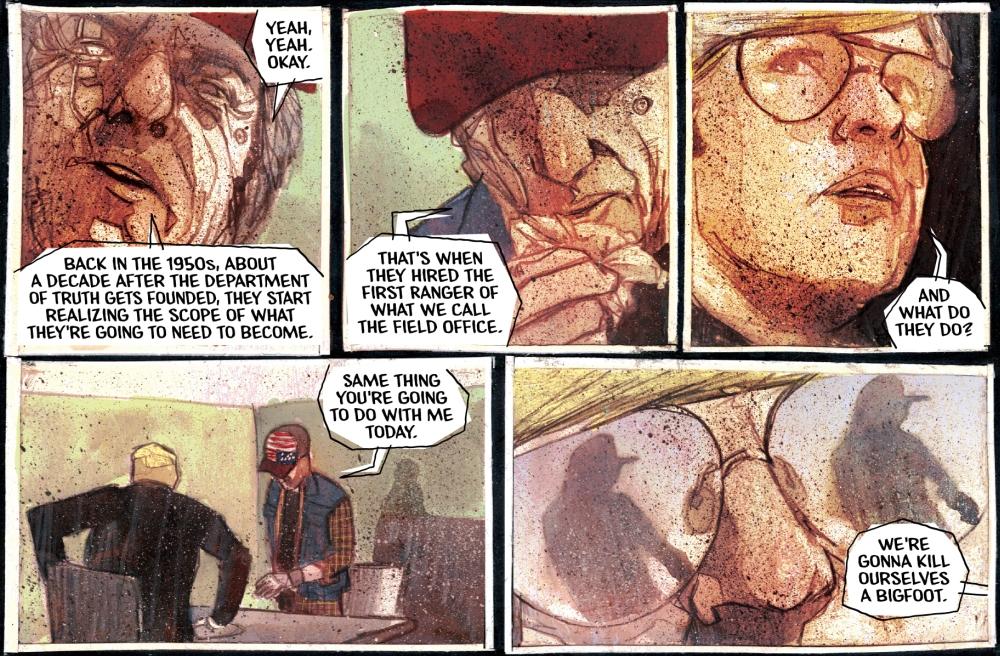 The Department of Truth #10 takes us further down the rabbit hole, and Tynion keeps digging it deeper than I ever imagined possible. Tynion’s story is addictive and keeps me jonesing for my next monthly fix.