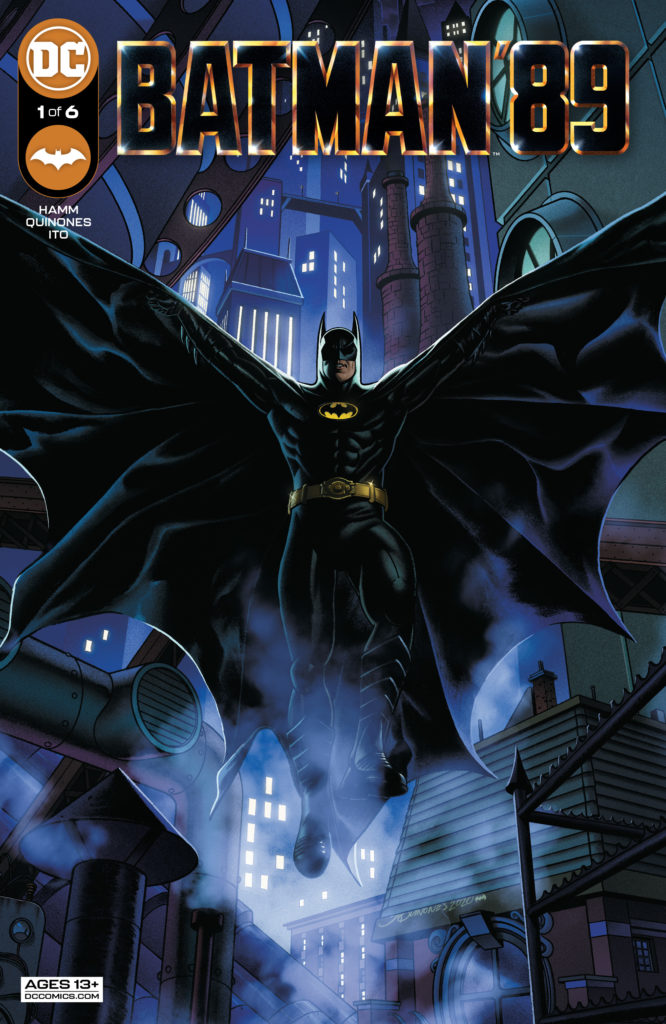 Batman ’89 #1 – Step back into the Gotham of Tim Burton’s seminal classic Batman movies! Batman ’89 brings in screenwriter Sam Hamm (Batman, Batman Returns) and artist Joe Quinones (Dial H for Hero) to pull on a number of threads left dangling by the prolific director.

Gotham becomes torn in two as citizens dressed as Batman and The Joker duke it out in the streets. As D.A. Harvey Dent tries to keep the city together, he targets the one problem tearing it apart: BATMAN!

And he’ll get Bruce Wayne’s help in taking down the Dark Knight! 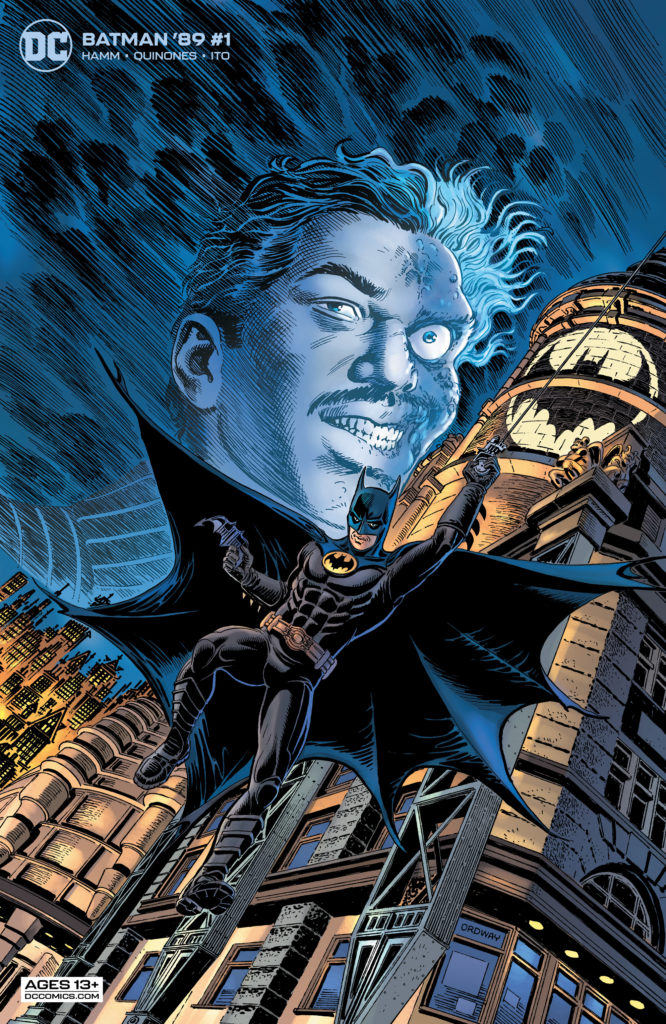 This book has been on my radar for some time as it is a celebration of when we finally got to see the Caped Crusader in an albeit darker form that the 1966 television series.  From Prince’s soundtrack to Michael Keaton uttering that famous line “I’m Batman”, this six issue series promises to fill in the blanks from the Tim Burton movies that featured Jack Nicholson, Michelle Pfieffer, Danny DeVito and of course, Micheal Keaton.

The art in this is spot on as Joe Quinones pays homage to the films perfectly.  Albeit, his Bruce Wayne has a bit of Reed Richards grey on the side, but he provides the slender Batman.  He has the feel of that era in every drawing, and that is what we as readers, and as fans of the movie, were craving! 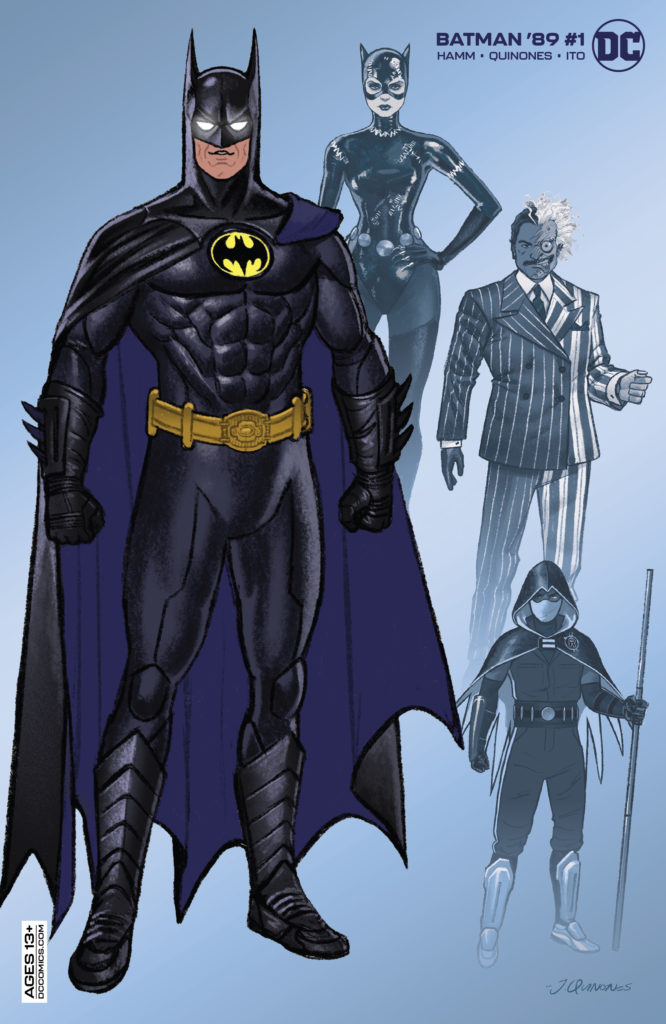 From his renderings of Billy Dee Williams as Harvey Dent (Did you catch that shading of his face where we see the duality….and can you not see Billy Dee holding a Colt 45 beer instead of a glass of red wine?) to a sighting of….Prince as the Joker?  Quinones is the star on this book because we as fans wanted to see more and more of these characters developed.

What better way to start this six issue special than have Harvey’s background explained in a different way as an African-American neighborhood icon.  He wants to marry Barbara Gordon…a new twist in Batman lore.  We see a different origin of the coin flipping, which will ultimately make his transformation more tragic.

From the costuming to the iconic ’89 Batmobile, it is all there.  Joker’s Goons supply a splash of color we wanted and the citizens adorned in fedoras are a perfect touch.  It’s Tim Burton’s world through Joe Quinones’ lense! 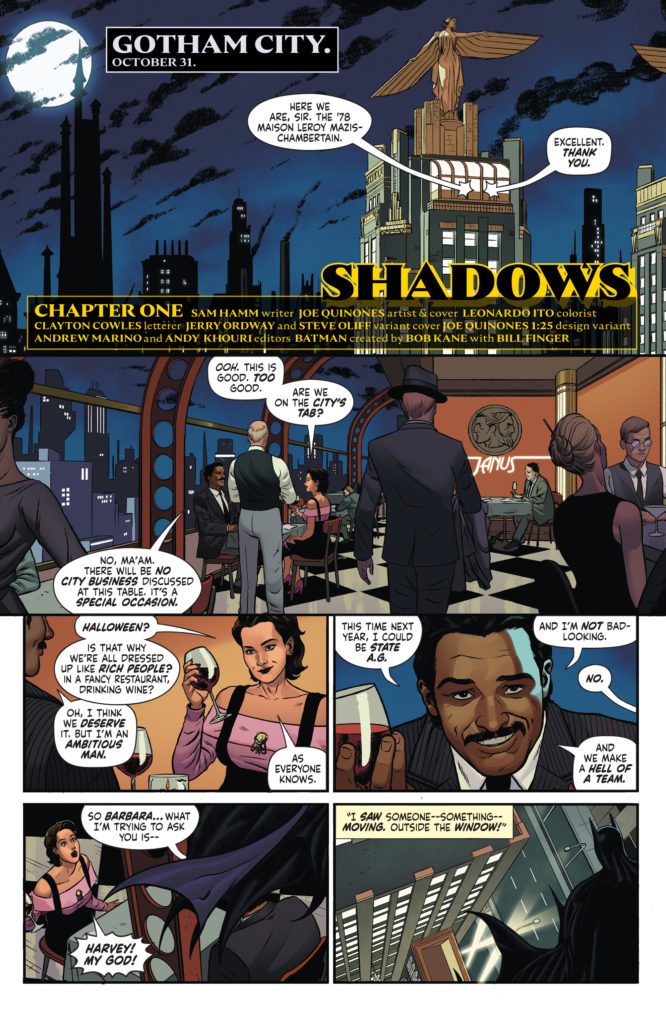 Sam Hamm provides the back story…when we first saw Harvey Dent, portrayed by Billy Dee Williams, we wanted to see the full transformation.  However, somehow Hollywood provided us Tommy Lee Jones…great makeup, but not the Burton idea that we started with.

Hamm takes the reins and returns us to the original.  The Joker is gone…his goons remain and Batman is in the crosshairs of the District Attorney.

He also provides what appears to be a new Robin.  None of that silliness we got from the George Clooney movie…we are adding something special to the flock.  Love that this “Robin” is already adorned in a costume that is not like anything we have seen before. 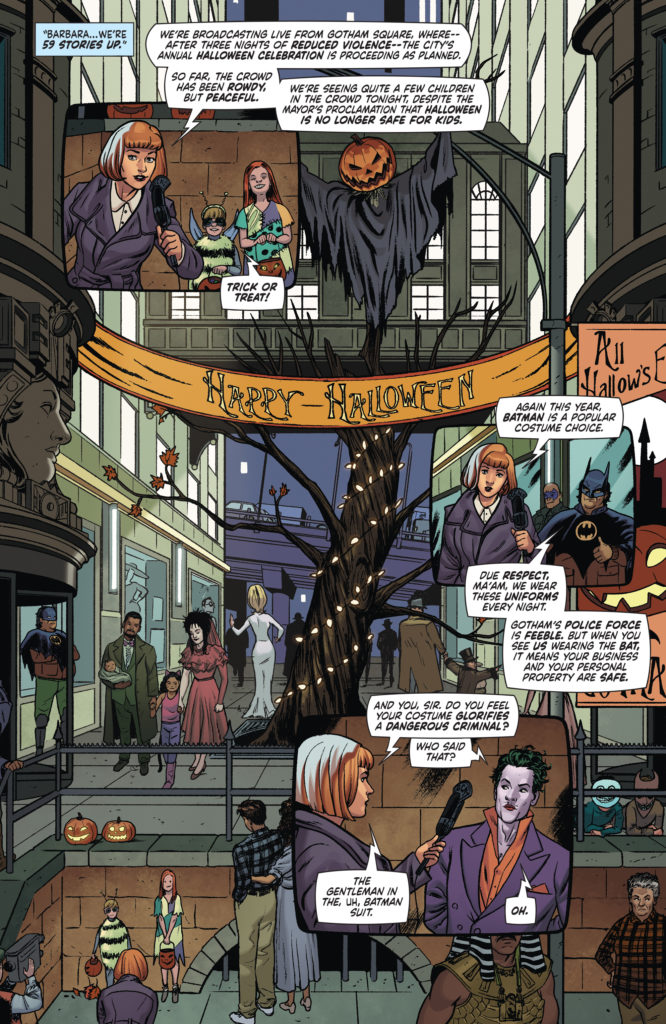 If you were not privy to Micheal Keaton and Jack Nicholson’s 1989 Batman, you need to watch it!  In fact, pick up a copy of the comic, though it might set you back a fair price now.  This Batman is what a lot of us were started on in the cinema.  It’s nostalgia and not negative! 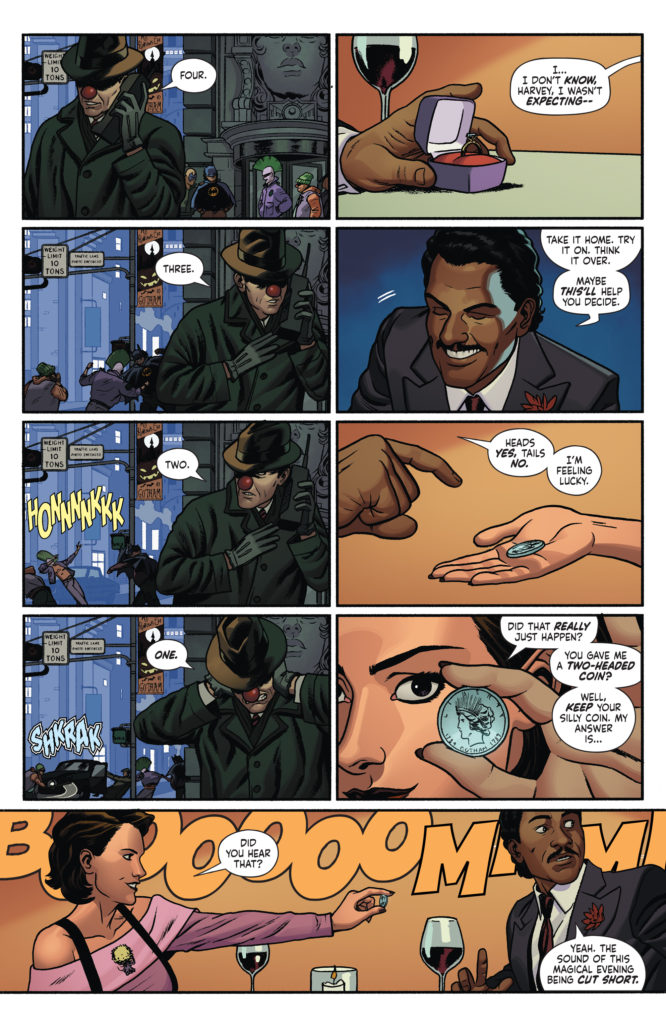 I already want the remaining issues!  Sam Hamm and  Joe Quinones hit all the right notes.  Clayton Cowles letters like the pro he is and Leonardo Ito splashes that 80’s vibe across the pages that we so wanted!  Again, love that “Prince” cameo and those fedoras.  So many Easter Eggs and so much eye candy with a solid script!  You can hear “Party Man” booming in the background!