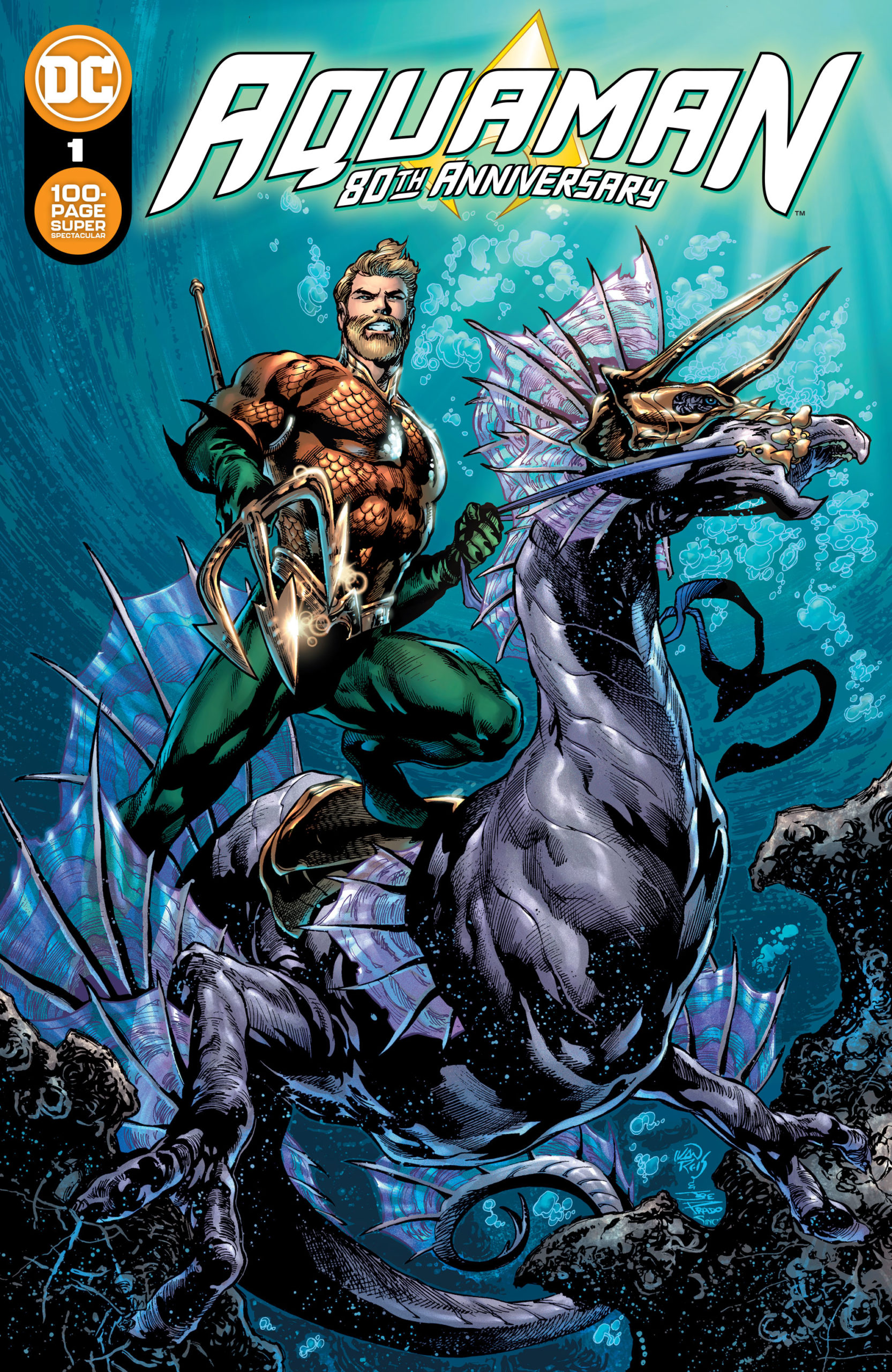 Come celebrate 80 years of the King of the Seven Seas with an all-star cast of creators in the Aquaman 80th Anniversary 100-Page Super Spectacular! 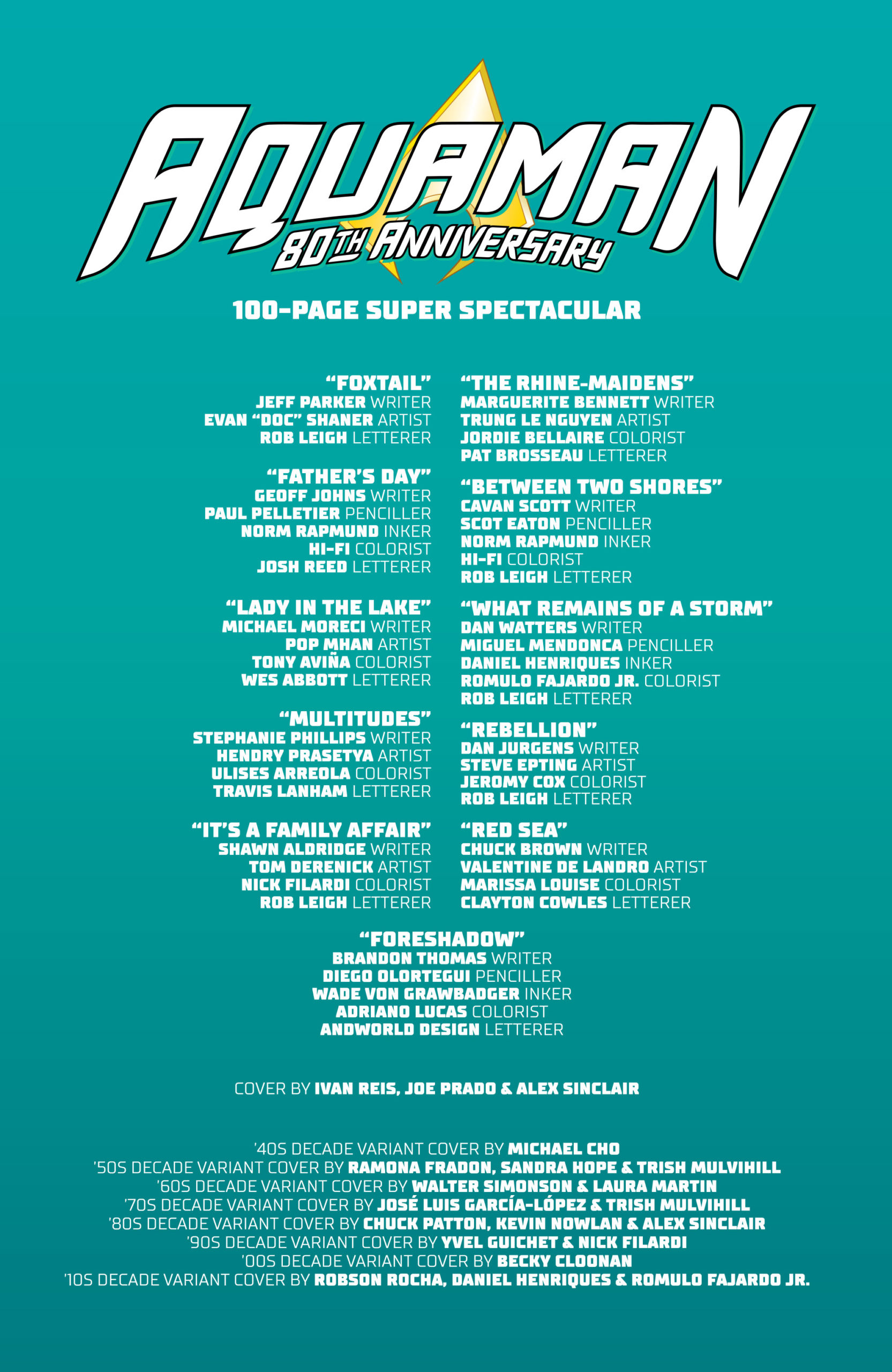 In the past few years DC has been publishing these 80th Anniversary 100-Page Super Spectaculars for a number of characters.  They’ve also managed to get them to coincide with the thousandth issues of Action Comics in 2018 and Detective Comics in 2019 for Superman and Batman respectively.  The best stories in these issue evoke either some sort of core idea or concept of the particular character.  Sometimes they also have a story that is done to depict/reference a particular era.  Both the Robin and recent Green Arrow 100-Page Super Spectaculars did this quite well. 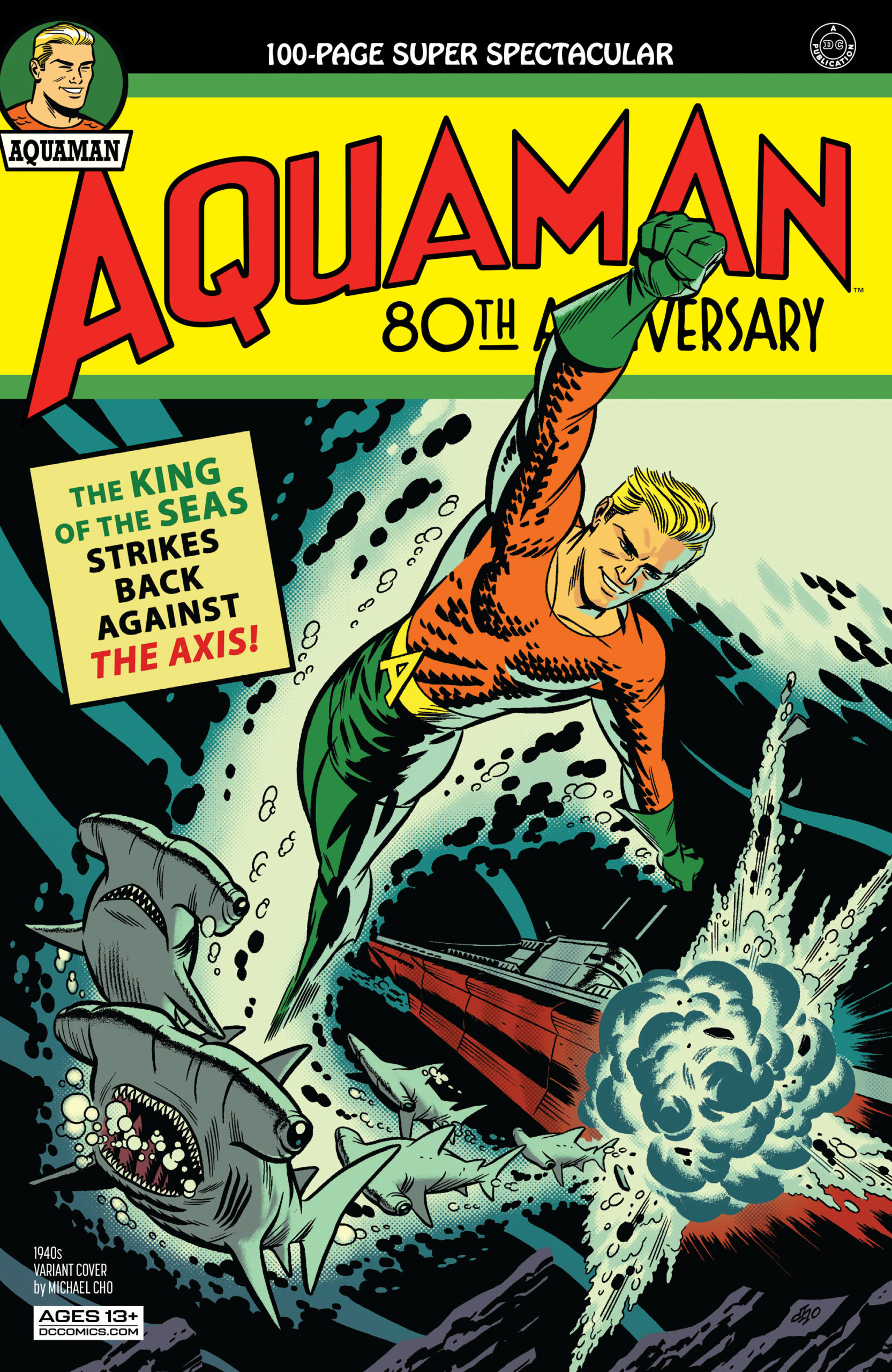 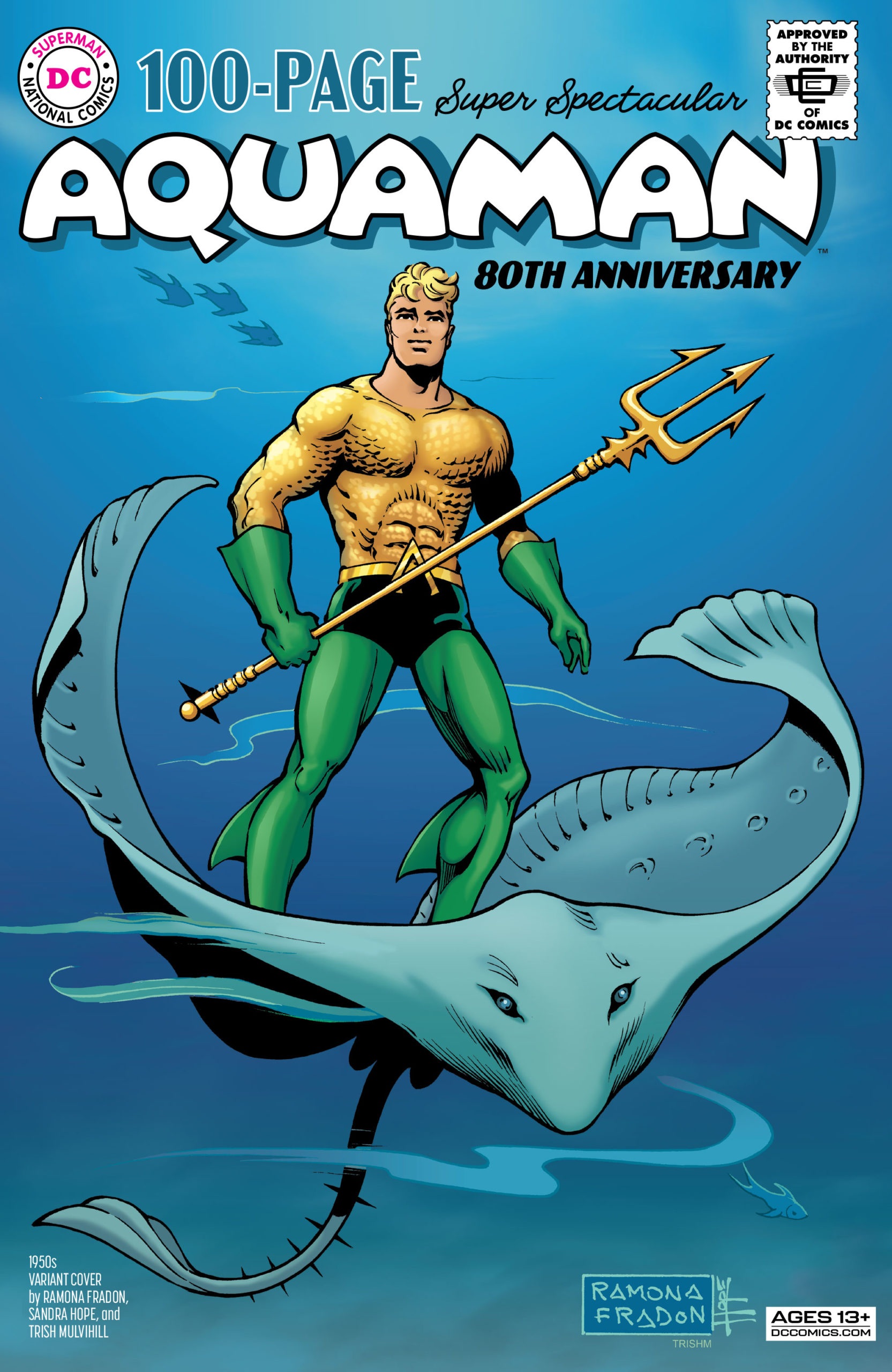 The lead story is by Jeff Parker and Evan “Doc” Shaner.  “The Foxtail” does an excellent job of depicting Arthur’s connection with the sea creatures addressing one part the environmental aspects of his character.  Stephanie Phillips contributes a story that seems to take place between the pages of the 1986 Aquaman mini-series by Neal Pozner and Craig Hamilton.  Interestingly, this mini-series is probably remembered more fondly than it was received at the time.  If you have it it’s worth a re-read.  Tack the story, “Multitudes” on from this Super Spectacular, it’s in the running for the best story in the issue.   And, as a bonus she works Arion into the story as well! 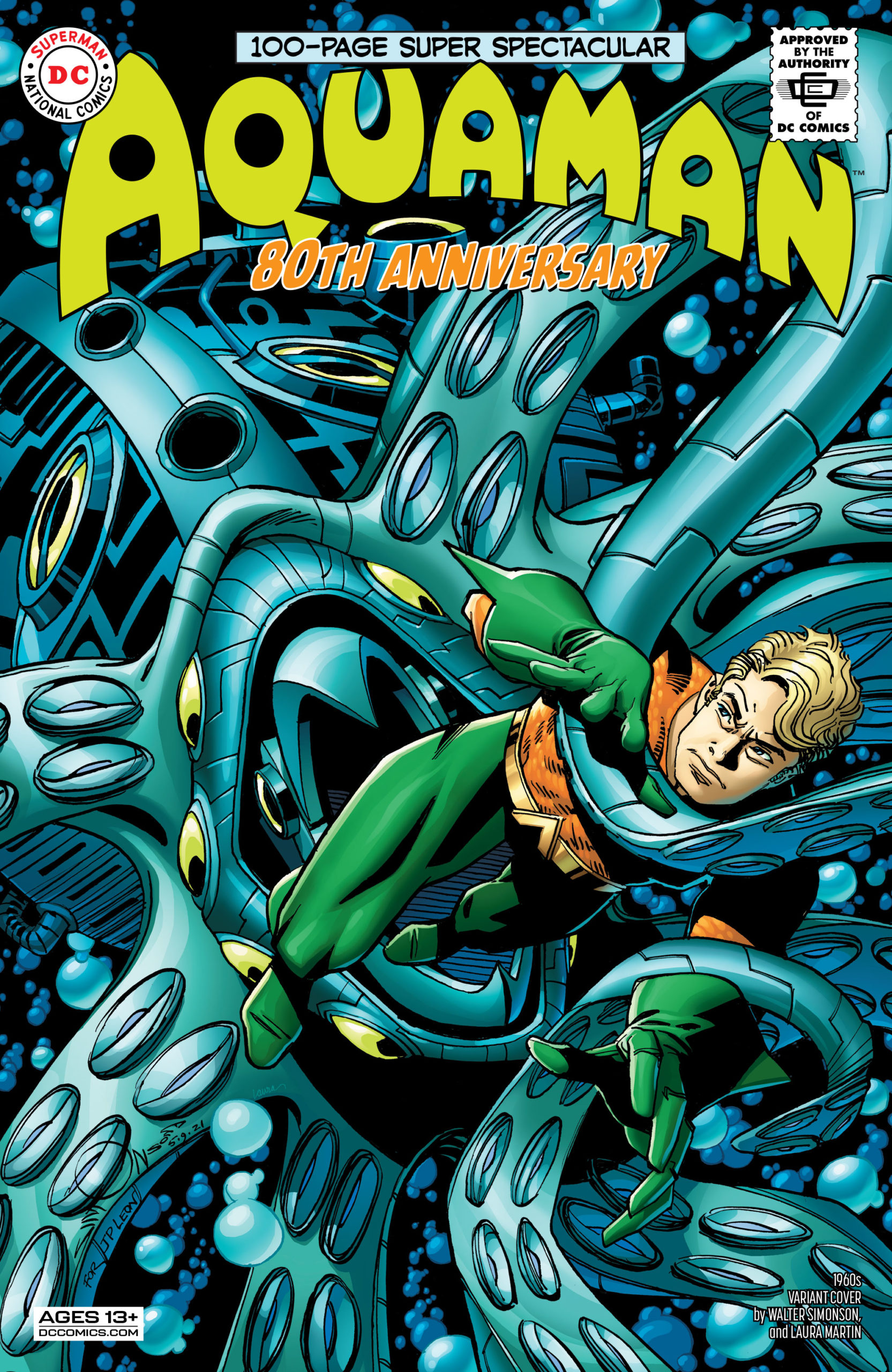 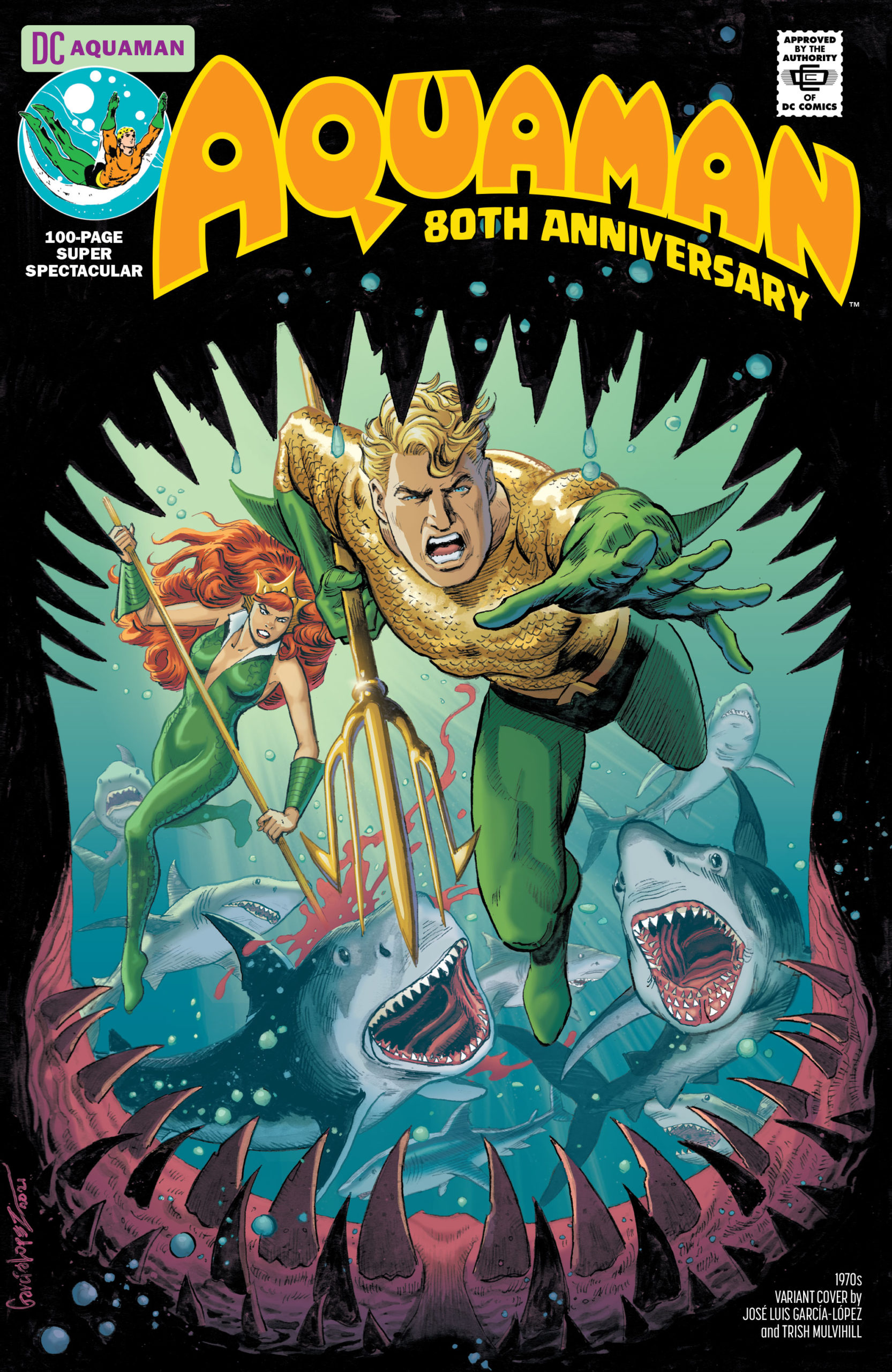 “It’s A Family Affair” does a nice job of evoking a particular era, but it does goes a little too much into Super Friends territory as it feels almost like a parody instead of a genuine homage.  What it does well though is remind the reader of the family aspect of Aquaman and how important that’s been to the character for a long time. 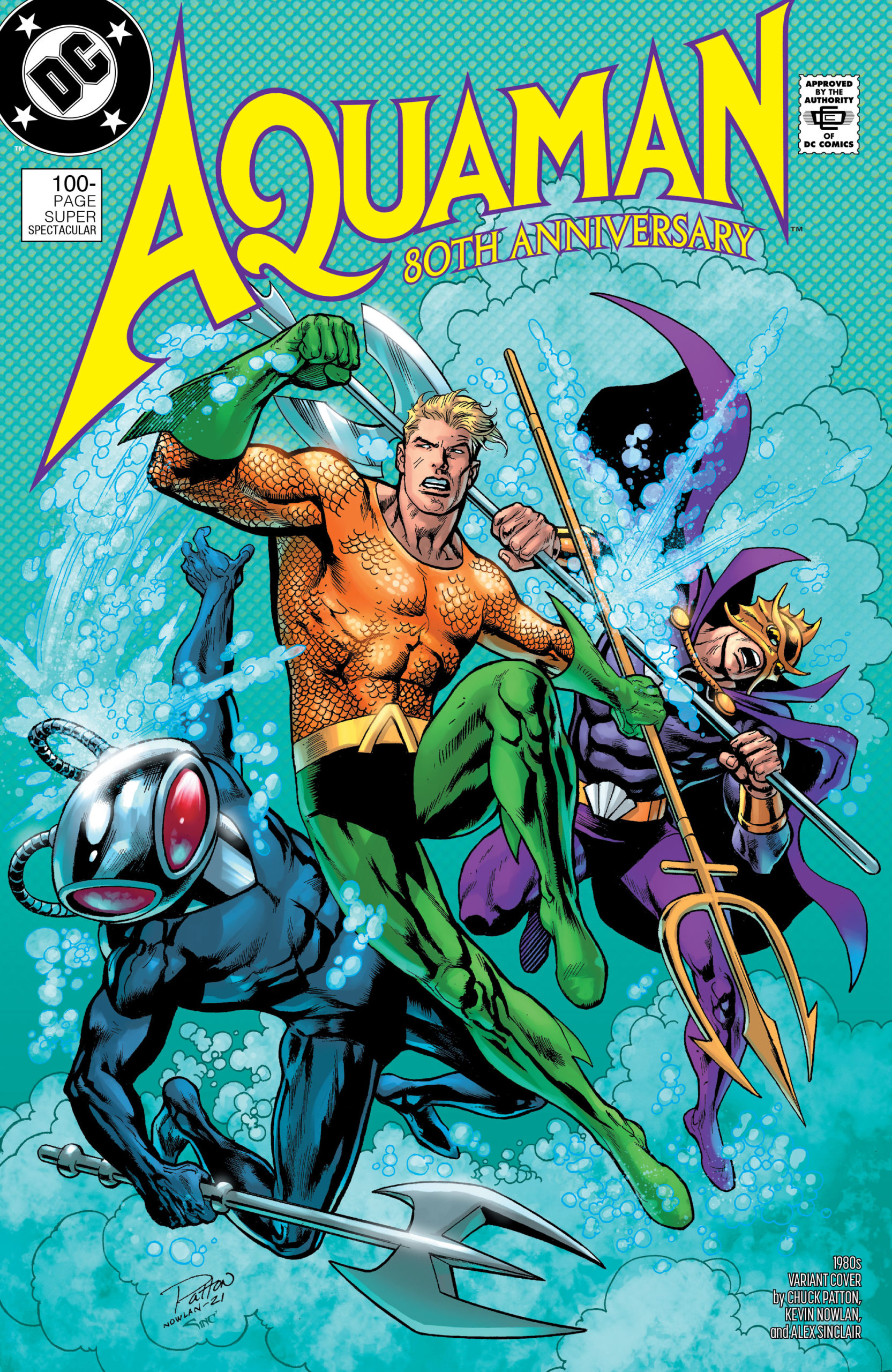 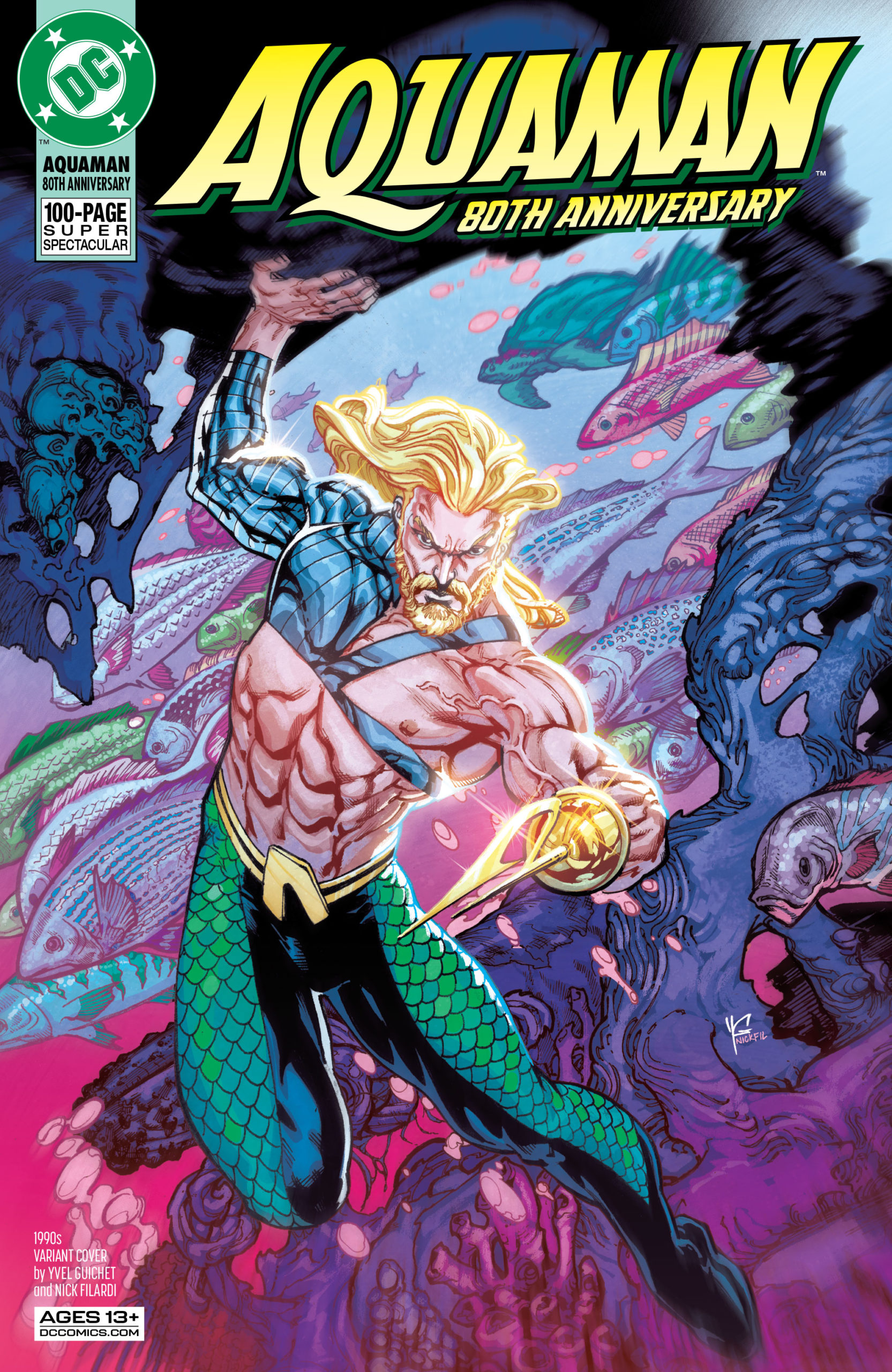 The stories that feature Jackson Hyde and/or Black Manta are also at the top of the issue.  There’s no doubt I’m hooked for the upcoming  6-issue Black Manta  mini-series.  The development of Jackson Hyde was easily one of the best parts of the most recent Aquaman series and it’s the same here in the Aquaman 80th Anniversary 100-Page Super Spectacular.  The final story not only utilizes Jackson Hyde, but the entirety of the Aqua-Family.  It also promises to continue the story of the entire Curry family in the forthcoming, Aquaman: The Becoming mini-series launching in September.

It’s almost a shame to say it, but the variant covers seem to do the best homages in the issue.  The 1940’s variant by Michael Cho is stunning in a couple of ways.  One- it captures the feel and look of a Golden Age comic perfectly, both in the art itself and in the design and logo.  Two- Aquaman didn’t get his own title until the ’60’s and furthermore, unlike the Golden Age Green Arrow, he never appeared on a cover until The Brave and the Bold #28 (1960), the first appearance of the Justice League of America.   So, this is like a cover of a lost ashcan edition that we didn’t know existed.  It’s quite magical in that way.  His gloves should’ve been colored yellow as they were in the Golden Age, but that’s a minor complaint to go in the “Negatives” section. 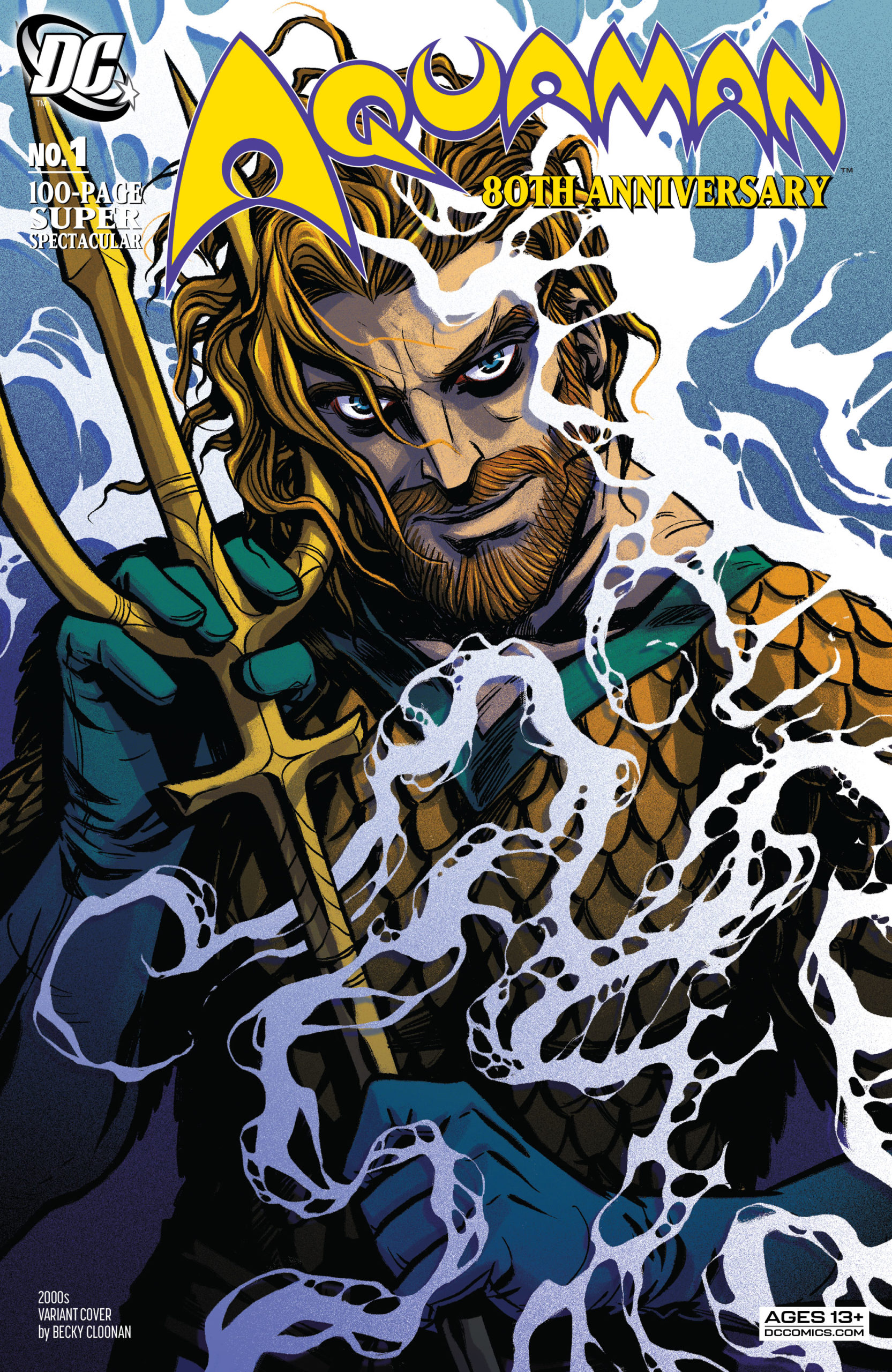 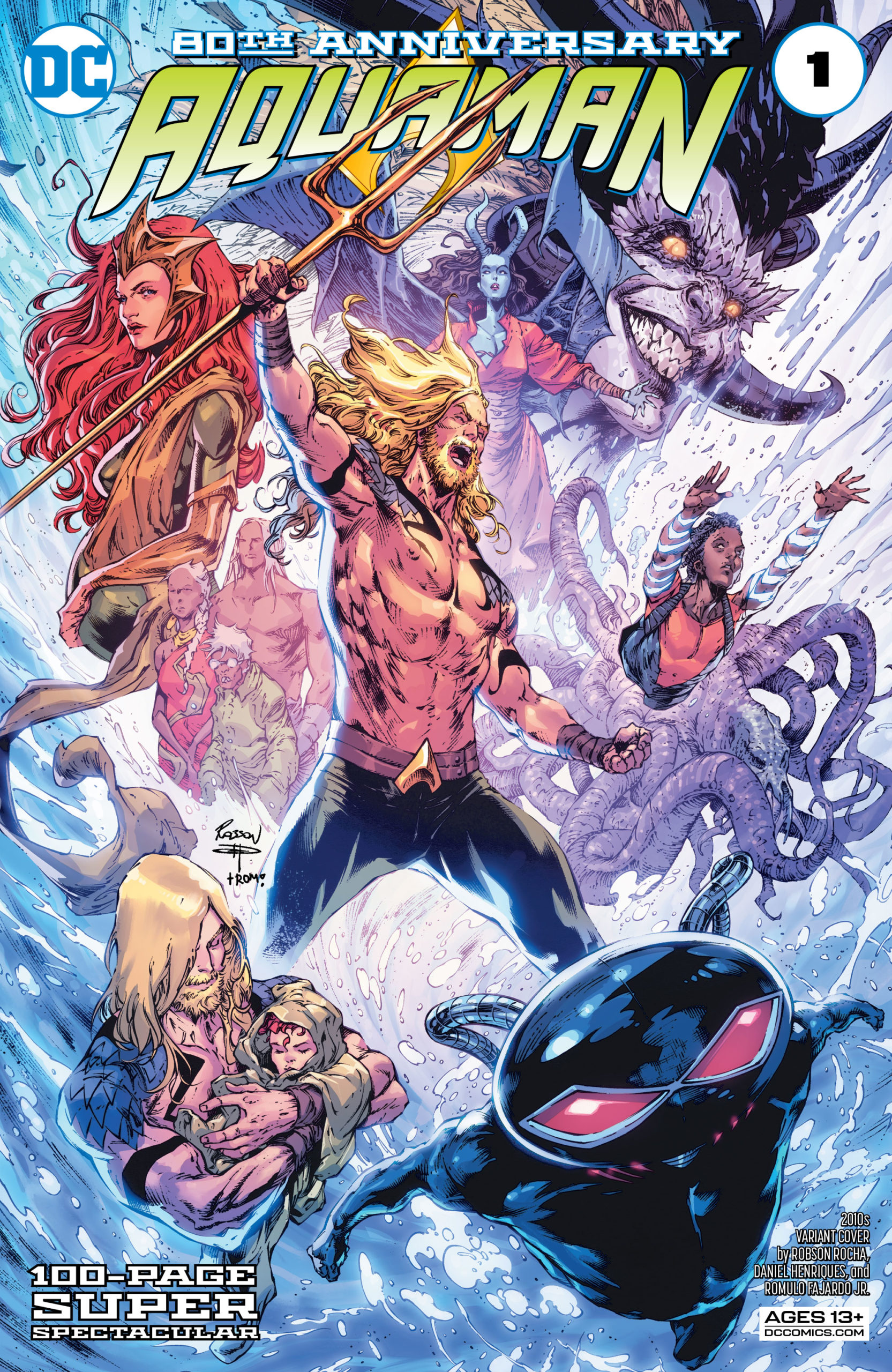 Cho’s cover isn’t the only cover that takes one back to a different era.  Ramona Fradon was THE Aquaman artist for a decade or more.  Her cover wonderfully recalls her own time on the character in the ’50’s.  Walter Simonson, Jose Luis Garcia-Lopez and Chuck Patton round out Aquaman’s first five decades with covers that are magnificent recollections of those days.  All the covers do this quite well.

With the covers being so evocative, it’s a shame that more stories don’t depict a specific era.  Except for a couple tales, the character is too homogenized throughout.  It’s almost like DC doesn’t understand the character well enough to present those other eras effectively.  It feels like they are hanging their hat too securely on Jason Mamoa’s portrayal in the recent Justice League and Aquaman films.  In addition to his appearance, his characterization drifts into that movie depiction.  It’s not as bad as it has been in some issues of the last Aquaman series, but there’s enough of it that it just feels out of place.

There are moments that sound and feel right in these stories, but depicting Aquaman with long hair and beard in almost every story doesn’t do a lot to recall the classic era, even if he’s wearing a version of the classic orange and green.  It’s weird that the covers get it right but the interiors don’t.  It’s a distracting disconnect.  It feels as if they don’t have confidence in their own character.  It’s a shame there isn’t a story that doesn’t feel inspired by the Steve Skeates/ Jim Aparo era, arguably the best Aquaman had been portrayed until Geoff Johns took over the character in “The New 52.”

On that same note, there’s no reference whatsoever to Arthur Curry Jr., Aquaman and Mera’s first born.  Perhaps, he doesn’t exist in current continuity, but he was an extremely important part of their lives for a very long time, even after he was killed by Black Manta.

Let’s get this guy a shave and a haircut- any swimmer will tell you how impractical all that hair would be underwater.  At least Mera has hard water powers that she can use to subconsciously to keep her locks out of the way.

Overall, the Aquaman 80th Anniversary 100-Page Super Spectacular is a solid issue that commemorates the character if not the different eras always effectively.  The covers will get you through on that count, but it could get expensive if you wanted to collect ’em all!  There’s a lot to enjoy and a couple stories serve as portents of things to come that appear to be quite good.  It’s just sort of ironic that Black Manta and Jackson Hyde seem like they are poised to take Aquaman and the Aqua-Family’s place.