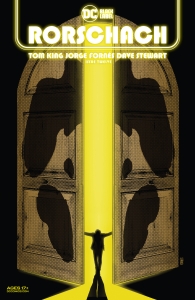 Rorschach #12: The end to the mystery is here! It’s been a long road to get here, and there have been a lot of dead bodies along the way, but the detective is very near closing the case. All the disparate threads lead back to the crime itself, to the assassination attempt that claimed the lives of the would-be assassins. Find out how it all went wrong for the comic book artist who put on a mask and declared himself Rorschach.

The solicitation text for Rorschach #12 implies that this concluding mystery is finally solved in this final issue. However, the unnamed detective protagonist already solved the mystery by the end of last issue. He doesn’t make any new discoveries this issue. Instead, Tom King’s story concludes by showing us what the detective does with this information.

Back in my review for issue #5, I stated my theory of how this series would end. I probably wasn’t the first or only person to come up with it, but my guess was that the detective would don the mask of Rorschach, believing himself to be inhabited by the spirit of the original Rorschach. Well, I was sort of right, but not entirely.

The detective never actually dons Rorschach’s costume, except in the metaphorical sense. He does take on the identity of Rorschach and completes the assassination that Wil Myerson and Laura Cummings failed. But I don’t think he actually believes he is inhabited by Rorschach’s soul or that Doctor Manhattan has been sending secret messages through the white noise in audio cassette tapes.

Compared to the many odd twists and turns this series has taken, this final issue’s story is rather straightforward. The detective has followed this mystery down a very circuitous path, but now that he’s uncovered the truth, he acts with simple, brutal efficiency. It took 11 issues for the detective to pick up Myerson’s mission, but he is able to carry it out rather easily. 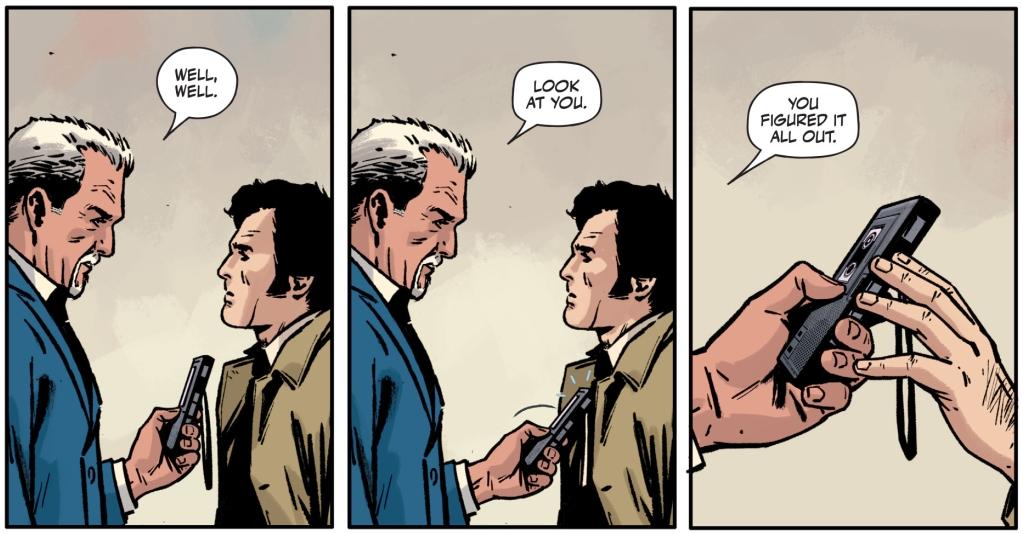 King does leave us with some lingering questions. Were Myerson and the detective literally inhabited by the soul of Rorschach or only metaphorically. The former doesn’t seem likely – but King doesn’t give any clear answer. However, the latter is definitely true. The spirit of Rorschach continues on in the Watchmen universe, well past the death of Walter Kovacs. The mask is the true face of Rorschach – not the face underneath.

One thing that I found ingenious is that King never named his protagonist. This underscores the idea that his life up to this story is unimportant. This series tells the story of how the detective discovers his true name: Rorschach. Rorschach is who he has become and who he was meant to be. When this series began, it seemed odd that Rorschach wasn’t the protagonist. In fact, it appeared that the real Rorschach was even in the title at all. But it turns out that the protagonist was Rorschach after all.

The story also leaves us wondering what the future holds for the detective. I suspect that the detective will carry on as Rorschach for other adventures after the final page. King could have easily killed the character at the end of the story. The fact that he escapes opens the possibility that there will be more adventures ahead. And while I would love to see some of those adventures, this is the ideal place for King to conclude his story.

Jorge Fornes has done an astounding job as the artist for this series. There have been some lovely examples of visual storytelling throughout this entire series. In some cases, the artwork carries the heavy lifting of telling the story, which shows how well King and Fornes function as a team.

This story was absolutely nothing like I expected from a Watchmen sequel, but I wouldn’t change a single word of it. 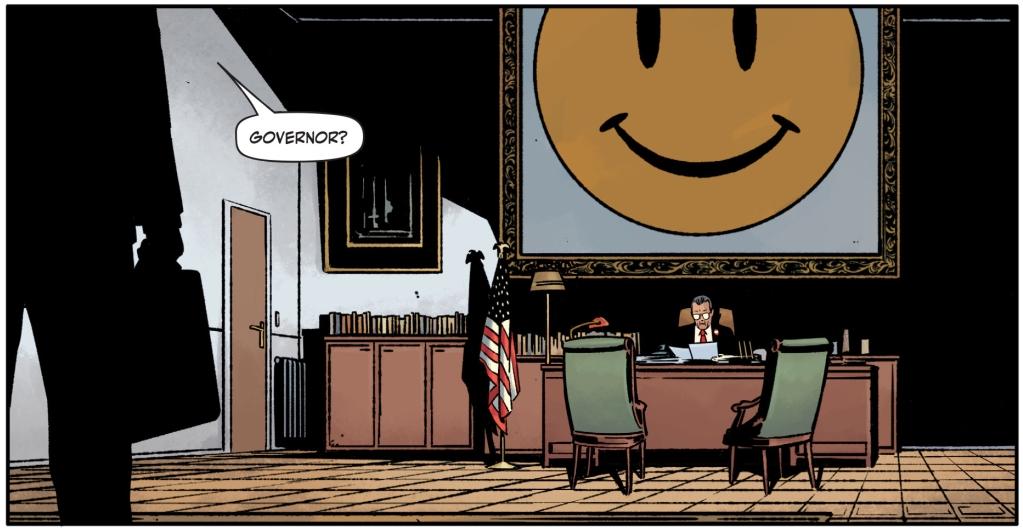 Watchmen #12 was a wholly satisfying conclusion to an absolutely astounding series. This is totally unlike any other comic story I’ve ever read, but I thoroughly enjoyed every single issue. Like King’s Mister Miracle, this will surely be recognized as one of DC’s all-time classic stories.

Review: Superman and the Authority #3