Attending NYCC in the Time of COVID

Arriving at New York Comic Con this year, my first concern was whether or not I’d be able to go through the off-site vaccination checkpoint, get my wristband, and make it over to Carnival Patrol in time to see the Doom Patrol cast. I assumed the process would be a mess, if not at least a long wait, and was even prepared to see a disgruntled attendee fisticuff or two. After over a year of relative isolation, I forgot that real humans are often polite, courteous, and not as scary as viral news clips may suggest. In a sea of eager-looking masked faces (well, as eager as one can look from the eyes up), everyone seemed more than willing to follow instructions, and who wouldn’t be? NYCC was the first major in-person comic book convention in the United States since 2019. I’m sure I wasn’t the only person happy to just be there at all. Needless to say, there were no fisticuffs, and five minutes and a few green flag waves later, I was on my way. 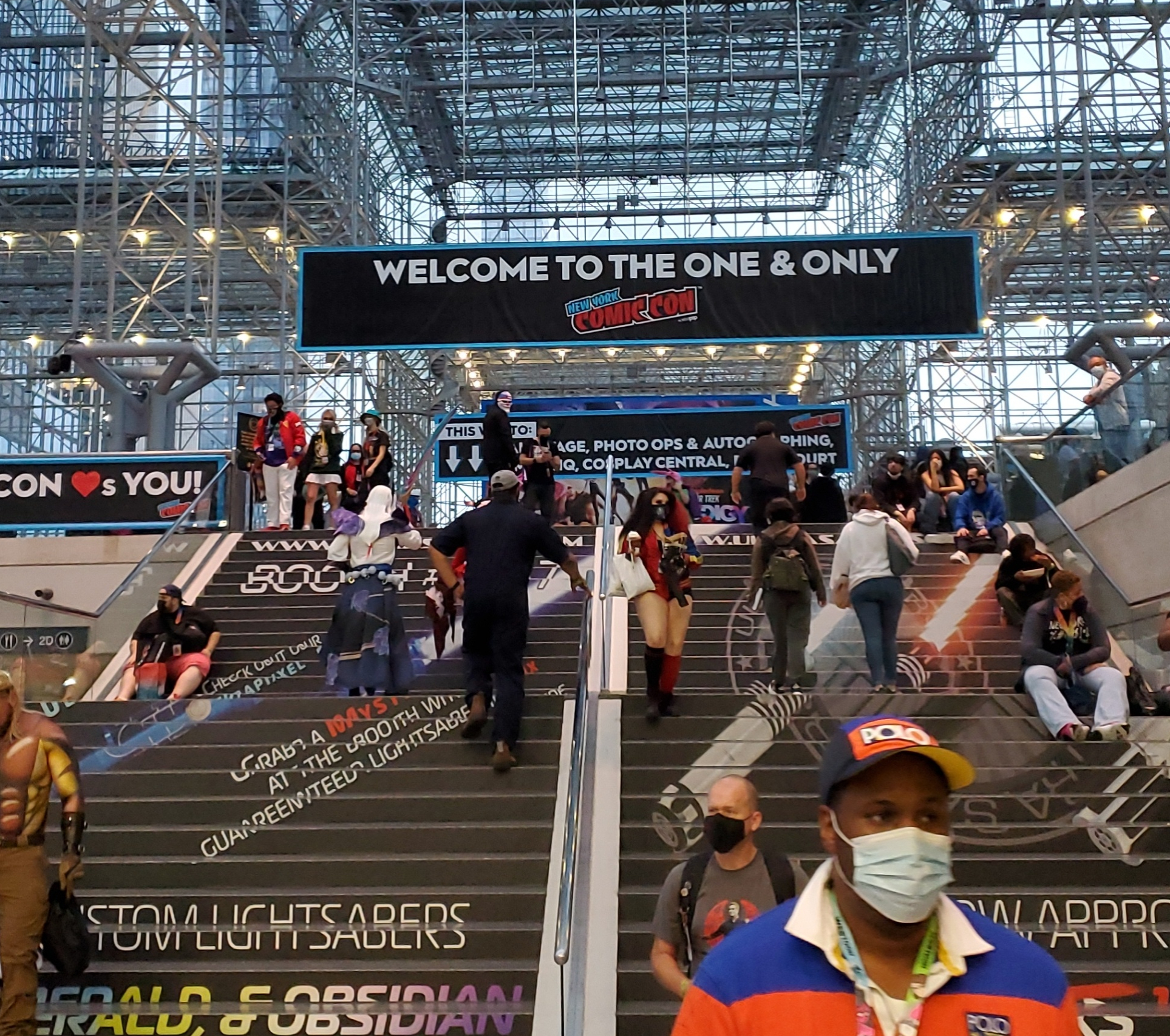 Ironically, the comic book community seems to thrive in a masked setting (maybe enough of us have seen Watchmen and Naruto to feel kind of bad a** about it). I can only comment on my own observations, but I didn’t see many people who appeared to be uncomfortable, complaining about their masks, or trying to remove them discreetly – certainly not as many as I expected. Maybe it was the sheer excitement of attending the con. Surrounded by life-size Dragon Ball Z statues, red and yellow Carnival Patrol tents, hundreds of cosplayers, and row after row of cool artwork and merch, I was barely aware of which direction I was walking, much less what was on my face. That was the vibe I got from everyone I came into contact with – pure, childlike excitement. Where else could you experience a Sandman Audiobook exhibit, see Jae Lee show off some of his best work, and play Doom Patrol themed carnival games next to a fully decked-out ambulance? (I’ll discuss Carnival Patrol in further detail at a later date.)  To make the understatement of the year, it was good to be back. 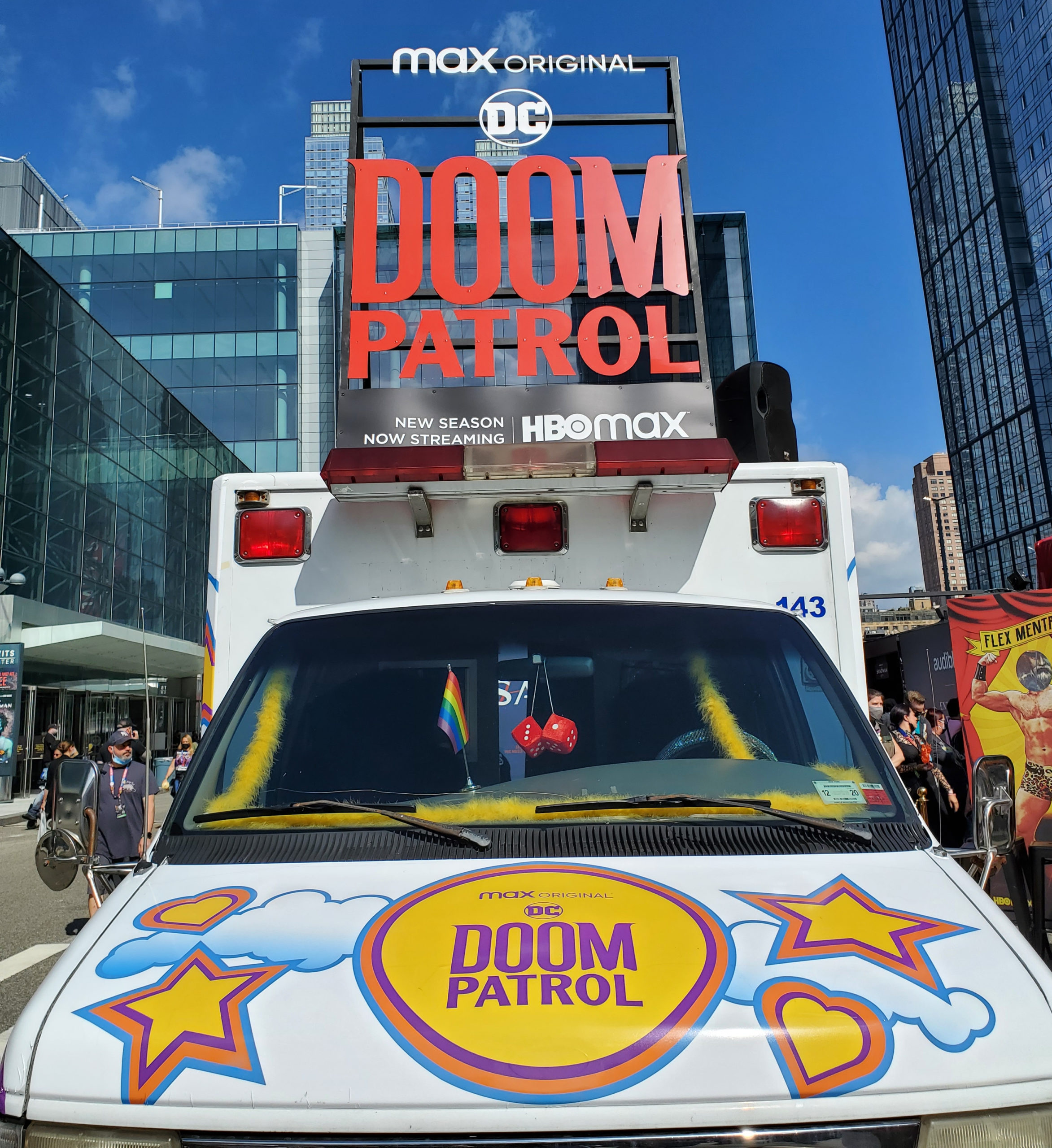 Rather than regale you with a minute-by-minute breakdown of why New York Comic Con is the best time ever, I would rather point out the biggest nuances of attending NYCC in the time of COVID. With any luck we won’t have to experience another pandemic-hindered convention, but should the occasion arise, here’s what you need to know about attending NYCC, or any other Comic-Con, during a pandemic.

New Experience 1: Trying desperately not to cough during panels

We’ve all seen the memes. Since March of 2020, a sneeze or a cough in public has the potential to send everyone into a panic, or at least get you some sideways looks. So what’s a seasonal allergy sufferer like myself to do when that ol’ itchy-throat-cough-attack arises during a panel, specifically at that quiet moment after a question has been asked and the panelist is mulling over their answer? Try desperately not to cough. I kept a ready supply of cough drops in my purse and a water bottle on hand, but there’s no stopping that instant wave of terror when you know a cough is coming and there’s nothing you can do but cover your mouth and pray it’s just one (and it never is). Don’t worry, no one went for the pitchforks, but if you’re especially prone to coughing fits, you can always get an “It’s Just Allergies, I Swear!” tee-shirt printed.

New Experience 2: Perfecting the art of the masked tea-sip

I’m not going to ask if anyone else has forgotten they’re wearing a mask and tried to take a drink of something only to spill all over themselves, because I’m terrified of finding out I’m the only one. And as I mentioned before, it’s even harder to remember you’re wearing a mask when surrounded by the sights and sounds of nerdy bliss. Bear in mind that if you’re trying to keep an itch out of your throat all day, having a drink on hand is a must. If your convention survival guide includes bringing caffeine, water, or anything else to sip on while you peruse the show floors, it helps to have your masked *insert drink of choice* sipping skills down to a science, nay, an art. For me, that meant holding my breath before sliding the mask down, immediately taking a drink, and sliding it back up while pulling the cup away. Yeah, these are pretty basic human functions, but if you’re juggling an armful of comics, sidestepping through crowds, and scanning the tables for other cool knick-knacks, a confident approach to this art (and yes, it is an art) means a lot fewer spills and dirty looks. Of course, whenever possible, it’s best to step off to the side and away from other people when taking your mask down for any reason. Obviously.

New Experience 3: Keeping a respectful distance when sorting through back issue boxes

Nothing really gets a comic fan’s heart pumping like a vast collection of back issues. Maybe that’s why at every convention I’ve attended in the past, flipping through back issues meant standing shoulder to shoulder with complete strangers, usually with at least one or two others hovering uncomfortably close behind me, sometimes reaching over me to grab at something I flipped past. When NYCC 2020 was canceled, that was the first image that popped into my head. I thought, “Yep. That makes sense.” This year, given the circumstances, I was a little apprehensive about searching for single issues. Luckily, people seemed to be a bit better at maintaining a little distance. I wouldn’t go so far as to call it sufficient social distancing, but I definitely didn’t have to feel as many strangers’ arm hairs brushing against my forearm as I did in years past. The golden rule is patience and respect. I was happy to see a lot more people willing to stand a few feet back and wait for an actual opening before diving in. We’re making progress, guys!

New Experience 4: Weird to see some panel guests via pre-recorded videos or Zoom

I guess this one isn’t entirely new. Every convention of 2020, including last year’s NYCC, was through pre-recorded videos and Zoom calls, but a packed room of (often costumed) spectators watching a video of their favorite creators is a little strange to witness in person.  Sure, there have been pre-recorded videos in past panels, but when basically no one is on stage and it’s not a screening, it’s extra weird. Frankly, there were a few panels I skipped, knowing I’d be able to find the recording on the internet later. That’s not to say that absences weren’t totally justified, but it definitely takes away just a touch of the usual Comic-Con magic. Even so, the feeling of being surrounded by like-minded fans talking about the characters we love *in-person* is magic enough. 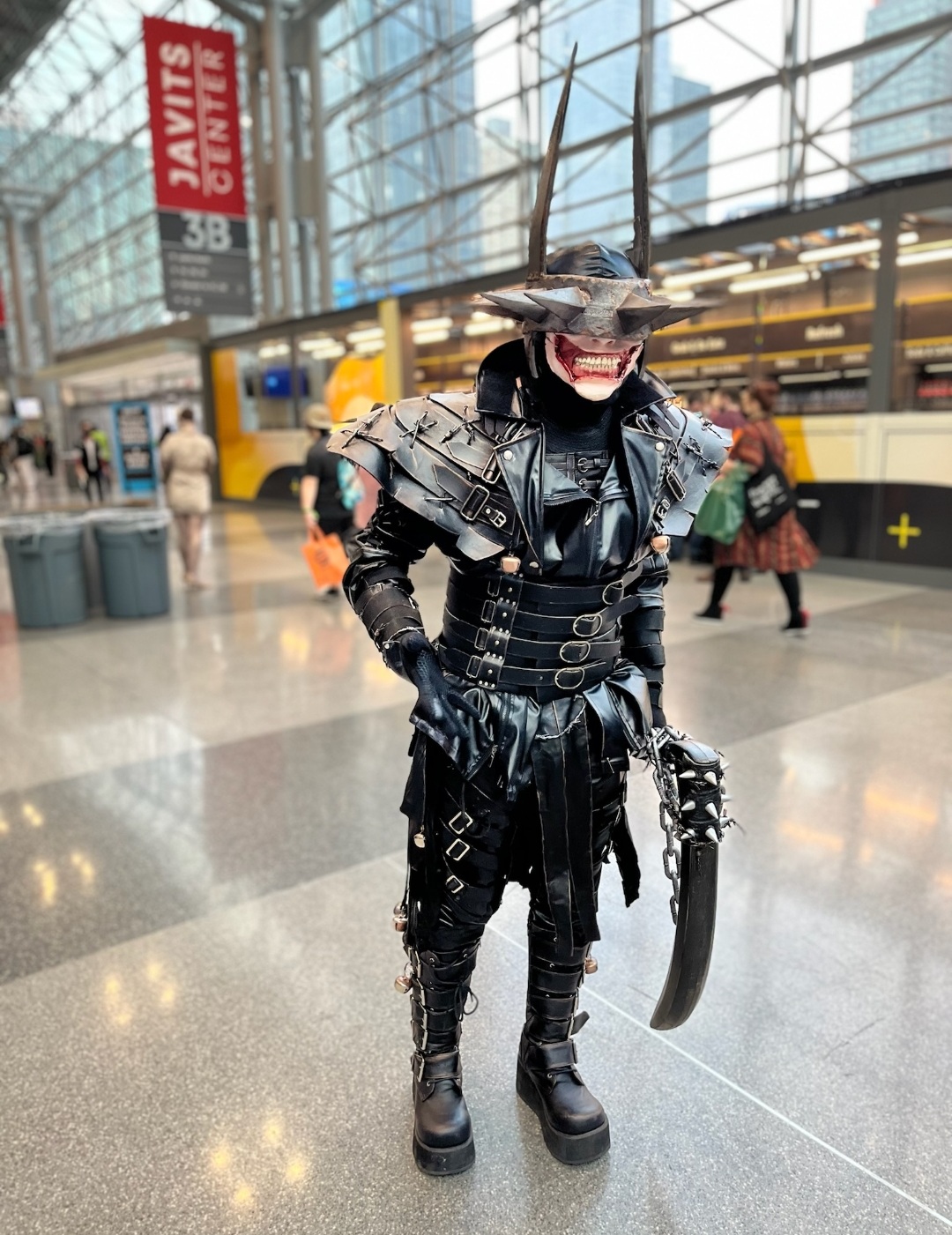 Prior to NYCC, I was curious to see how cosplayers would handle the mask situation. SO MUCH effort goes into the fine details, especially makeup.  I wondered if having to keep their faces covered ruined a little bit of the fun. In short, it did not. In long, the costumes were still so creative, vibrant, and intricately detailed that I barely noticed the masks. (If you’ve picked up on a theme here, good.) Fans came to comic con with their A-game, making it clear that come hell or high water, you can’t bring a good cosplayer down. Additionally, do you know how many costumes already require some kind of face-covering? Many. For every Spiderman in the crowd, this one’s for you.

At the end of the day (or Op-Ed piece, if you will) I’m sad that NYCC 2021 is already over. For those of us who attend the con annually, 2020  didn’t feel the same without our October fix of fandom Nirvana. There were fewer DC panels than I would have liked, and I ruined at least one shirt before figuring out the tea trick, but I can happily say that this convention far exceeded my expectations, as did just about everyone I had any contact with. People were friendly, polite, and all-around jazzed to be back in the Comic-Con groove, and I am capital “H” Here for that.

Review: Icon and Rocket: Season One #2