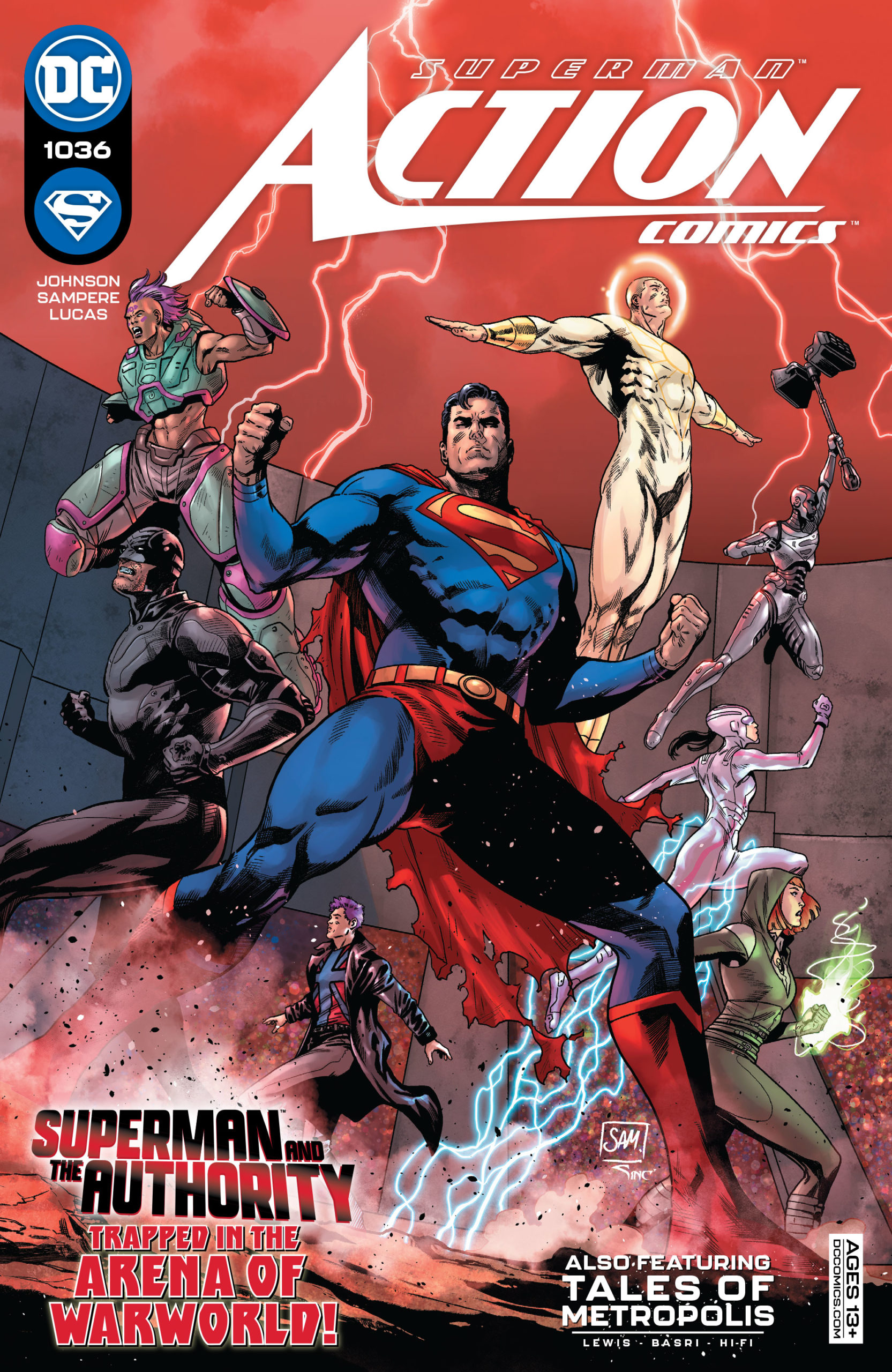 Superman and his allies arrive on Warworld and are greeted with unspeakable horrors.  And, there’s a deep secret surrounding the Phaelosians.

The mystery of the Phaelosians has been the strongest aspect of Phillip Kennedy Johnson’s Superman run.  It shouldn’t be surprising that there’s a deeper secret to their existence that’s yet to be revealed.  The opening scene in Action Comics #1036 deals with this as we see the Durlan leader, Thaaros abdicate in order to lead the United Planets.  However, the mention of the Phaelosians and Superman’s mission to Warworld sends him into a rage.  This intrigue stands out as the high point of the issue. 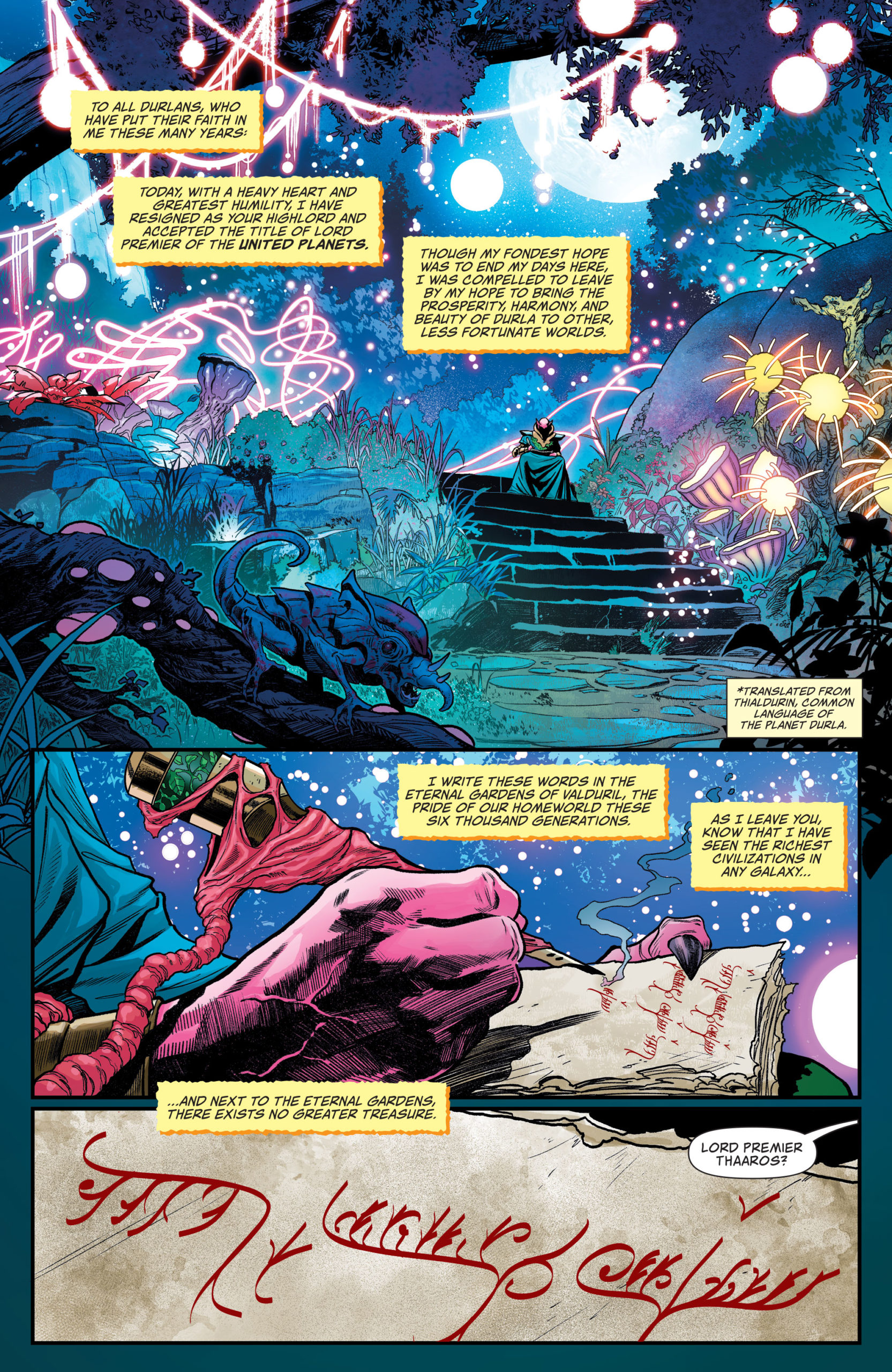 Daniel Sampere continues to do a brilliant job on the art chores.  Aided and abetted by colorist Adriano Lucas they give a bright and hopeful depiction of the Man of Steel that retains a classic look.  Sampere communicates a great deal of humanity in all his characters conveying the emotions in the story masterfully. 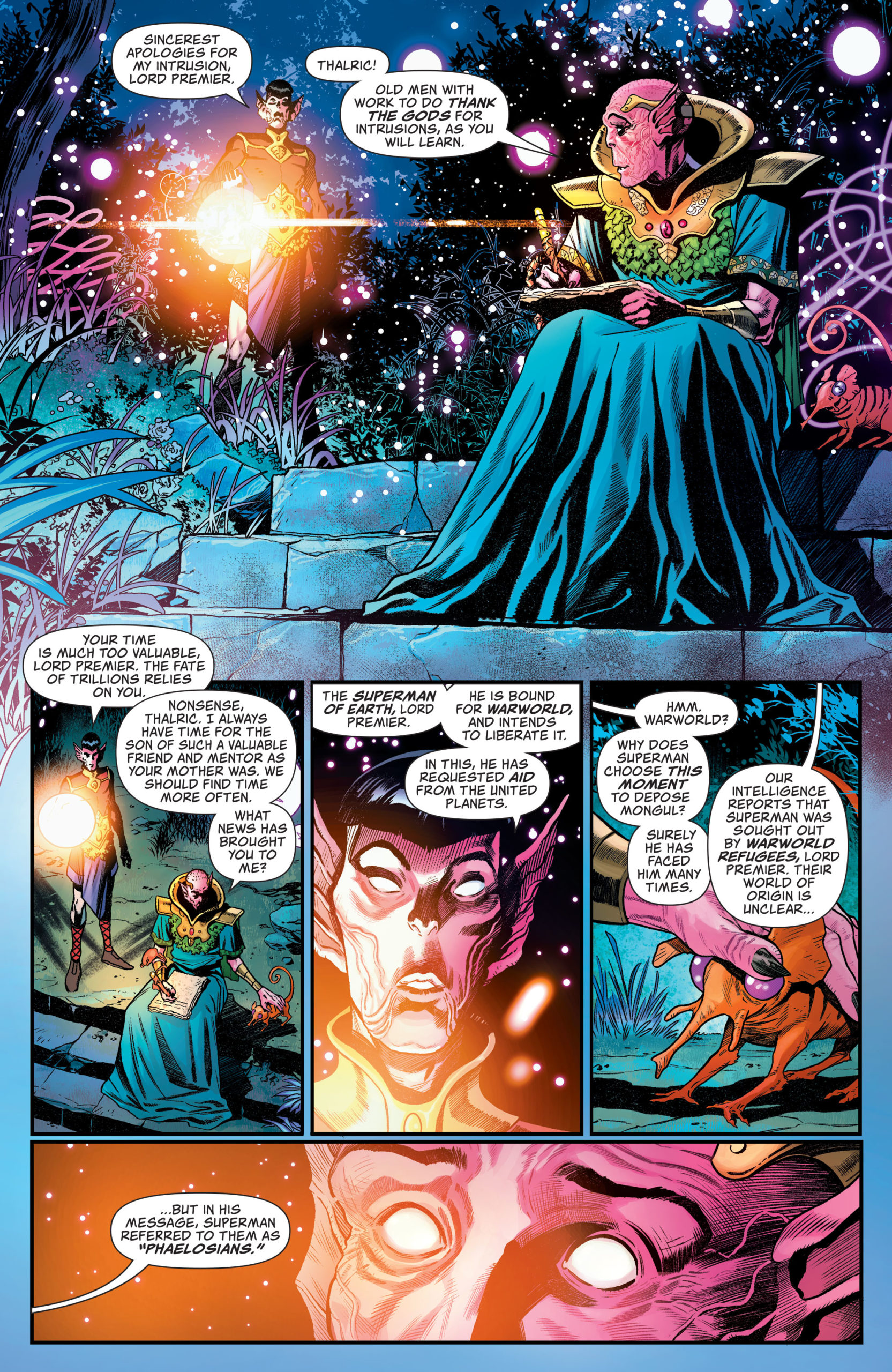 Variant covers don’t usually get the mention, but the World War II-era depiction of Superman by Julian Totino Tedesco should be a poster.  It evokes that “simpler” era perfectly, and Superman lifting a Nazi tank is thrilling.  It’s one of those covers that begs for a story. 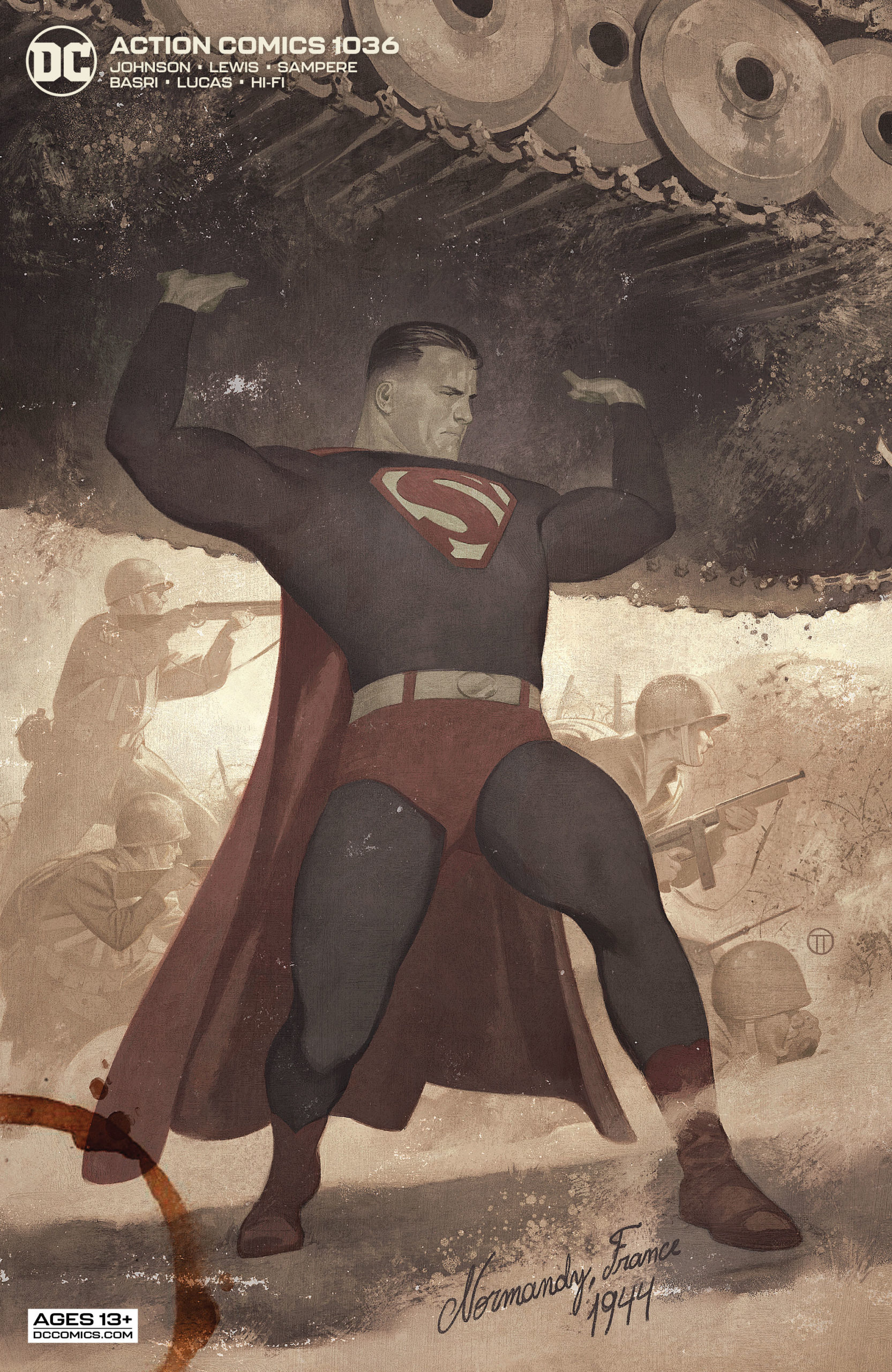 The shadow of Brian Michael Bendis hangs heavy over this issue of Action Comics.  It even infiltrates the best aspect of Johnson’s story.  It’s hard to be invested in a story when you aren’t invested in the events leading up to the story.  While the Phaelosian plot has been brilliant, the connections we see to Bendis’s additions to the Superman mythos detract from it.  It just serves as a reminder of the awful two and a half years that Superman and his family suffered under Bendis.  What’s worse is that DC has unwisely decided to maintain that status quo instead of jettisoning it into space like so much rotten trash.

It feels like Thaaros is going to have a “secrets and lies” moment like Jor-El did under Bendis and that the origin of the Phaelosians will be connected to that somehow.  While it is technically an interesting development, it goes in the wrong direction.  Having to go back and be reminded of Bendis’s Superman run is detrimental to pushing the character and his mythos forward.  It’s unfortunate at best and alienating at worst.

The whole notion that Superman is somehow weakening is also tedious.  It wasn’t a strong element when first introduced back in Action Comics #1029 and Superman #29.  and it hasn’t improved here.  It’s either a ploy to put Superman on more even physical footing with Mongul, or it’s an idea that had to be used somehow because it fit into the previous plans for Superman under the discarded 5G initiative.  From the standpoint of execution, the plotline needs to be concluded, it’s just not a very inspiring plotline. 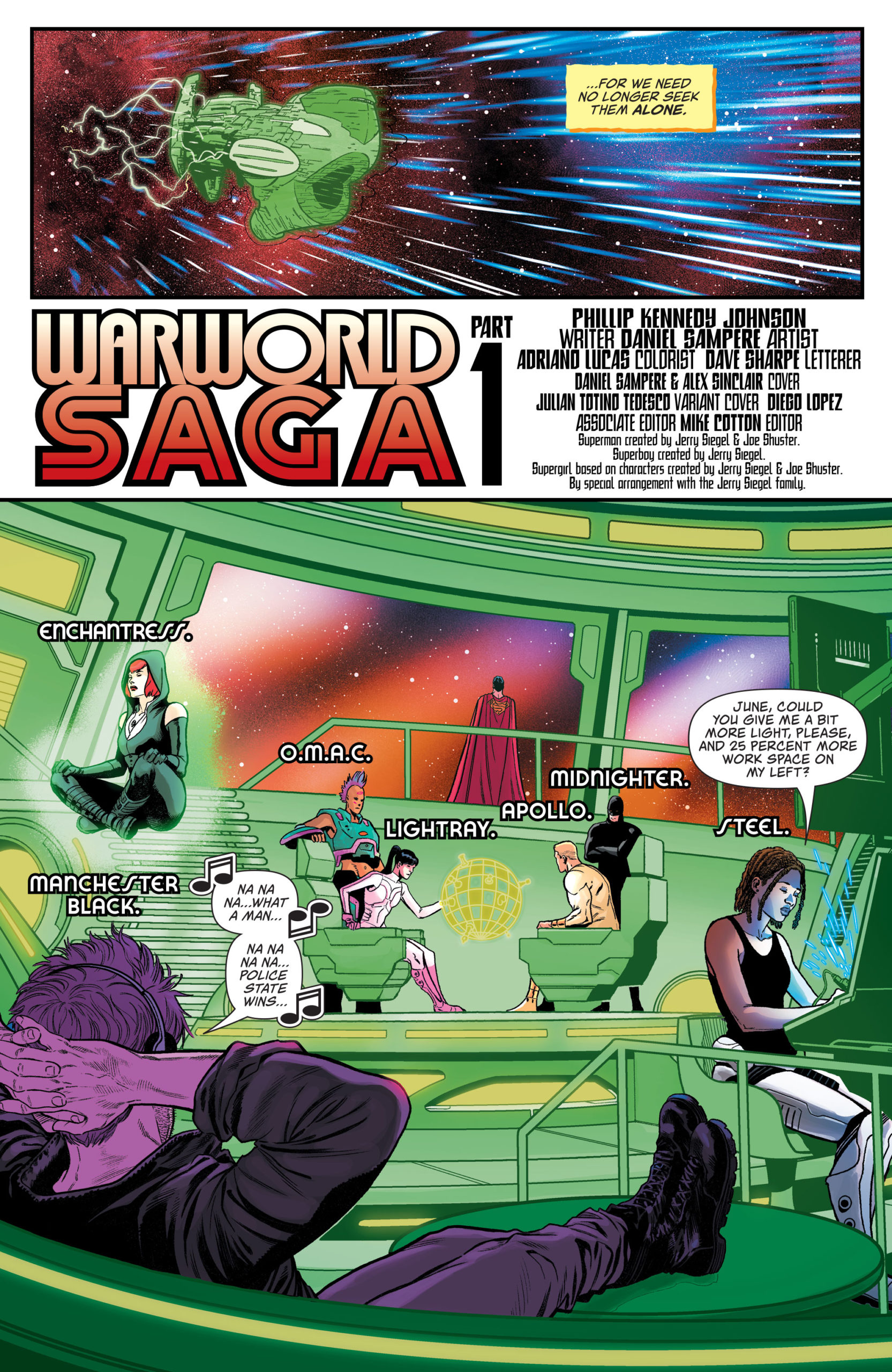 The “Tales of Metropolis” feature that rounds out the issue is disappointing as well.  It feels rushed, and nearly completely missing on character because we still don’t know which version of the Guardian this is. This is the second of a two-part story that could’ve been so much more.  The basic idea was great and last issue’s part one seemed like it was going to be the start of something bigger.  This could be due to editorial and not the creative team, but nonetheless, it was lacking.

Action Comics #1036 is very uneven.  Daniel Sampere and Adriano Lucas’ art are the most consistent aspects of the issue.  The story doesn’t spend enough time on the best part and most interesting aspect- the Phaelosians.  We don’t expect Superman to die, so the stakes don’t feel that high for his impending encounter with Mongul.  And, in the end, the Phealosions’ backstory is far more interesting than a bait and switch on Superman’s “death.”

The Thought Bubble UK Comics Art Festival Is Back