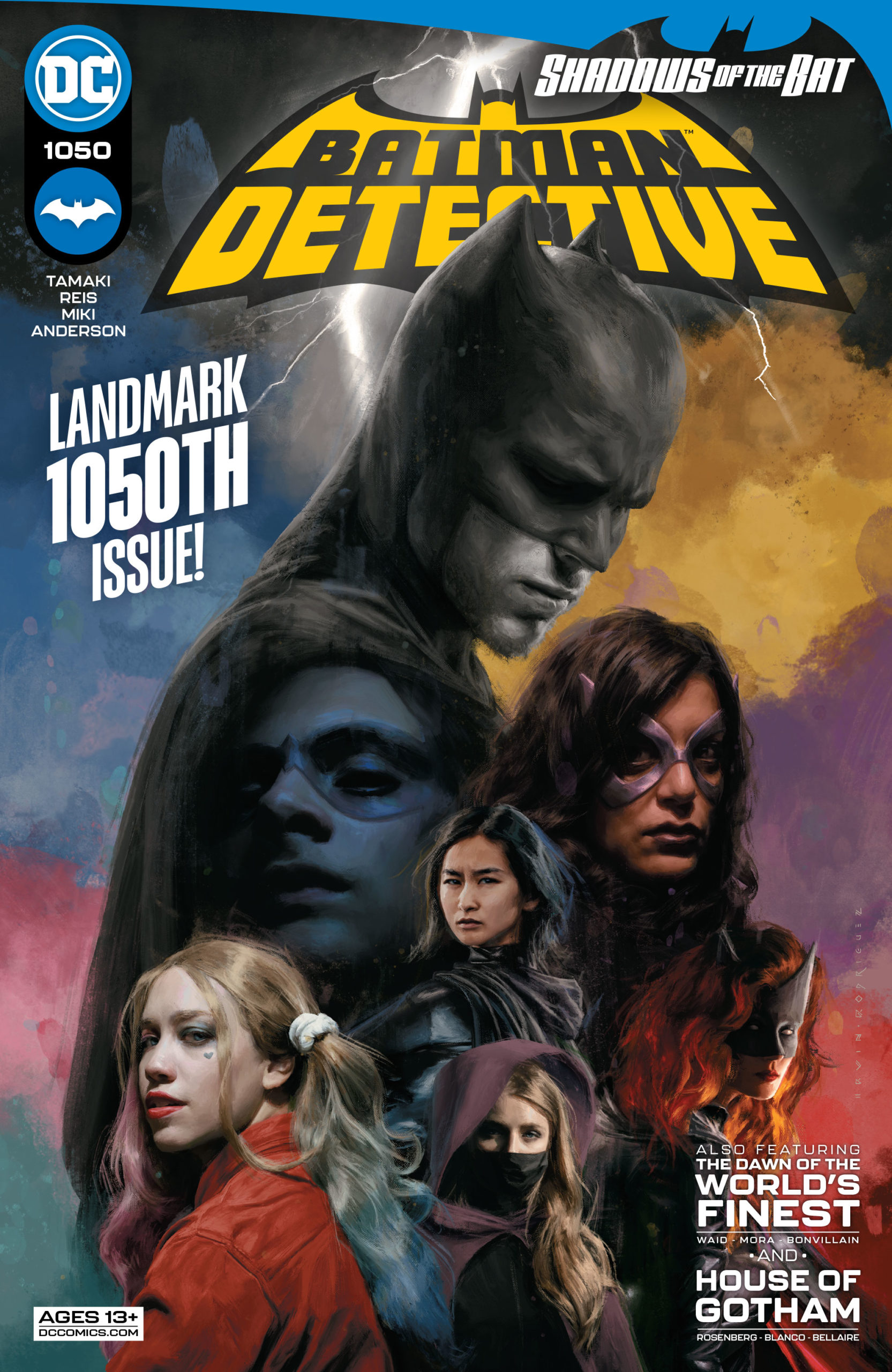 It’s Dick Grayson’s turn to enter Arkham Tower undercover, and the twisting story starts to straighten out a bit as last issues hints about Helena are confirmed. 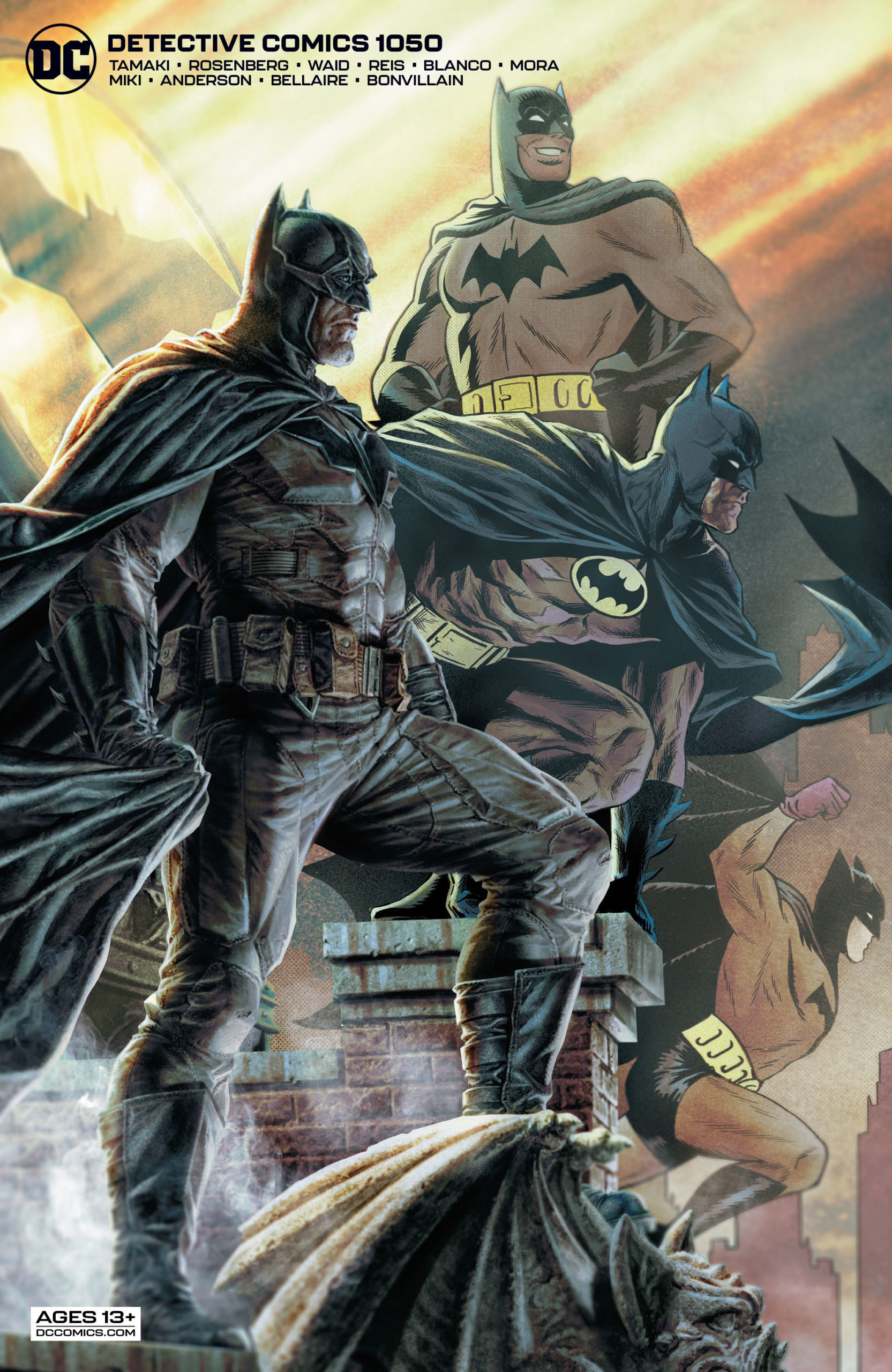 Like William Faulkner in The Sound and the Fury, Mariko Tamaki is writing “Shadows of the Bat” from multiple points of view out of linear order.  And, like that famed novel, the reader is left to piece things together, and with Detective Comics #1050, things are really beginning to coalesce.  We know Dick has a mission inside the Tower from Chapter One back in Detective Comics #1047, and in this issue, we learn not only what it was, but what he discovered along the way.  What Dick learns answers some questions that readers may have due to the non-linear narrative structure of this story arc.  While it may have seemed disjointed in the first couple of chapters, with this episode it is clear what’s going on and it’s an exciting and creative approach to storytelling.  Top marks for attempting it, and take it to eleven for making it work. 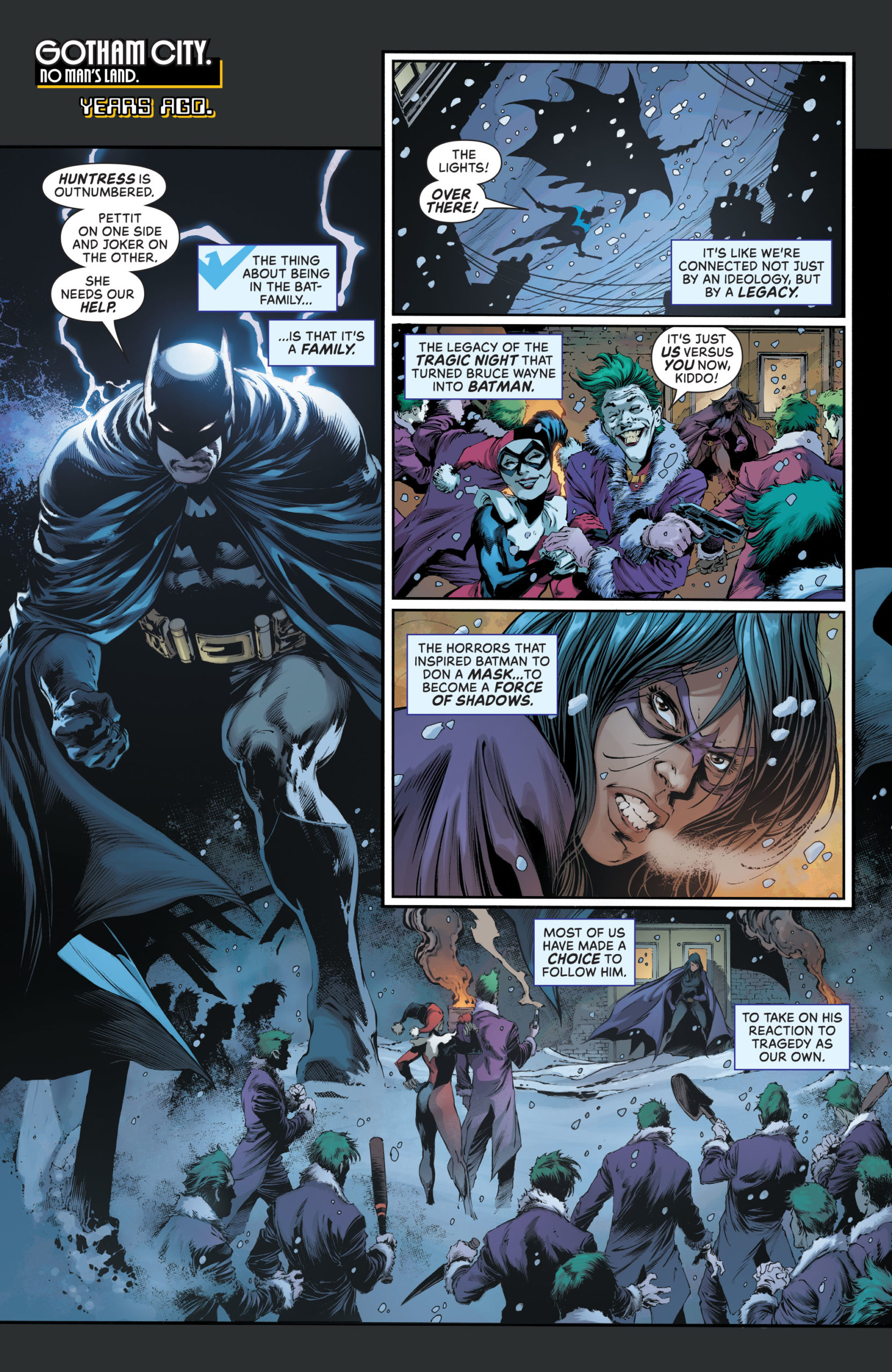 If there was ever a broken record moment in my reviews of Mariko Tamaki’s run on Detective Comics, it would be the praise of her character-focused approach to her stories.  It’s no different with this issue.  It opens up with a flashback to “No Man’s Land” which is a Bat-crossover event from 1991- almost 30 years ago!  Tamaki uses a moment from the story to demonstrate something about Helena (The Huntress) Bertinelli and how Dick (Nightwing) Grayson views her.  Tamaki references their romance, but more importantly, shows how Helena and Bruce Wayne are similar in personality and motivation.  It’s a really insightful sequence, culminating in Dick’s observation that “…while we are all in his shadow…she was made from the same dark material.”  It even acknowledges, in a meta-sort of way, that on the original Earth-Two, Helena was Helena Wayne the Huntress, Bruce’s daughter with Selina Kyle.  The similarity Dick sees is completely valid, both Bruce and Helena having their paths shaped by the murder of their parents. 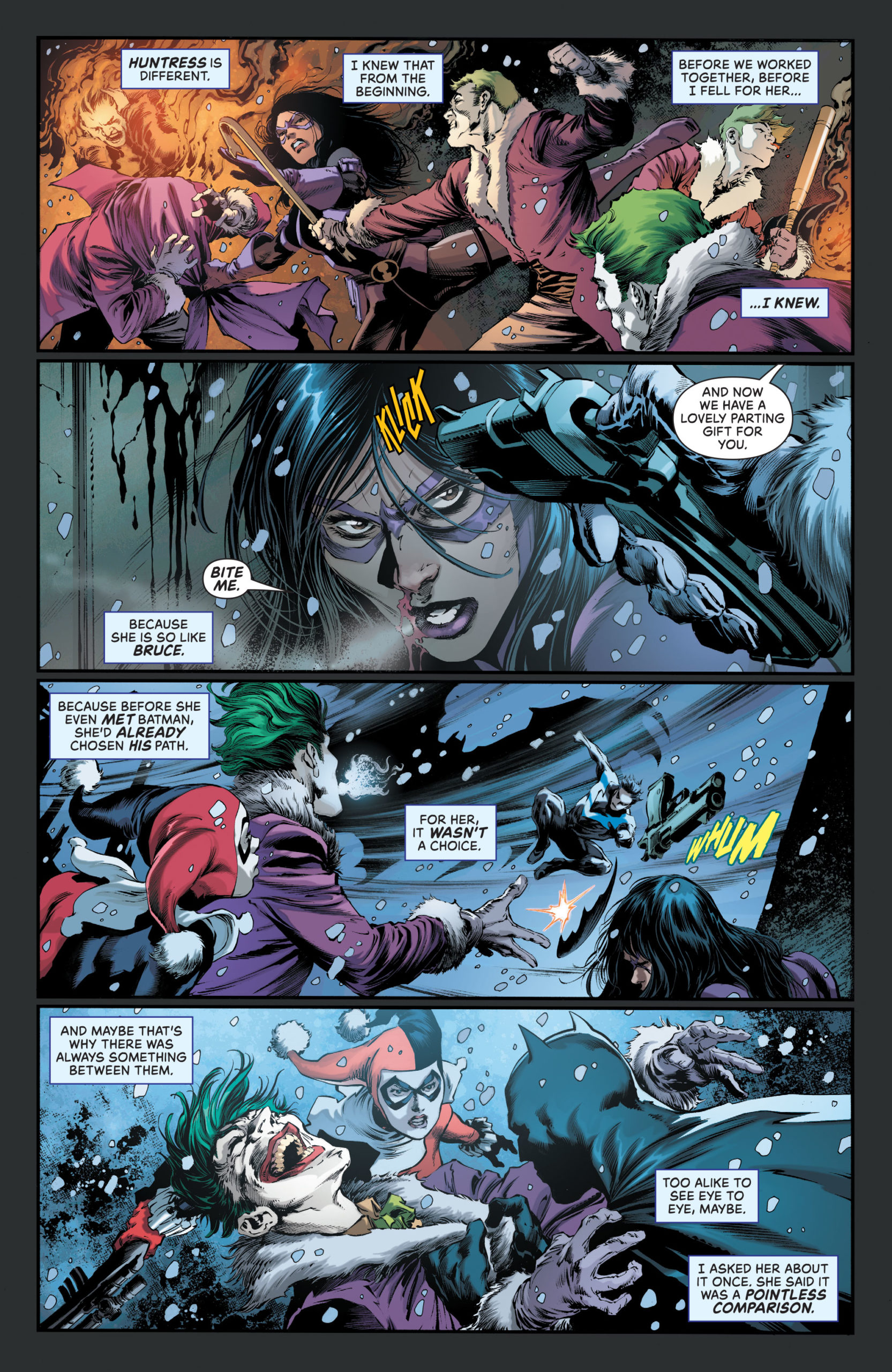 We get a big reveal at the end of the main story.  Tobias Wear isn’t working alone.  Now, exactly who’s in charge is a mystery as the reveal is a real surprise.  I won’t spoil it, but I will say it calls into question a lot of what’s supposedly going on at the Tower and suggests that the Bat-famly have no idea this person is involved with what’s going on.

The art by Ivan Reis is once again brilliant, with just enough Bronze Age style to give it that classic look.  There’s a phenomenal shot of Helena going out a window for a rescue with her face in shadow and her form framed by the broken glass that is a fantastic example of what Reis brings to a comic.  Fernando Blanco delivers equally in the second feature as he makes a young Dick Grayson move effortlessly in a classic Robin costume complete with pixie boots. 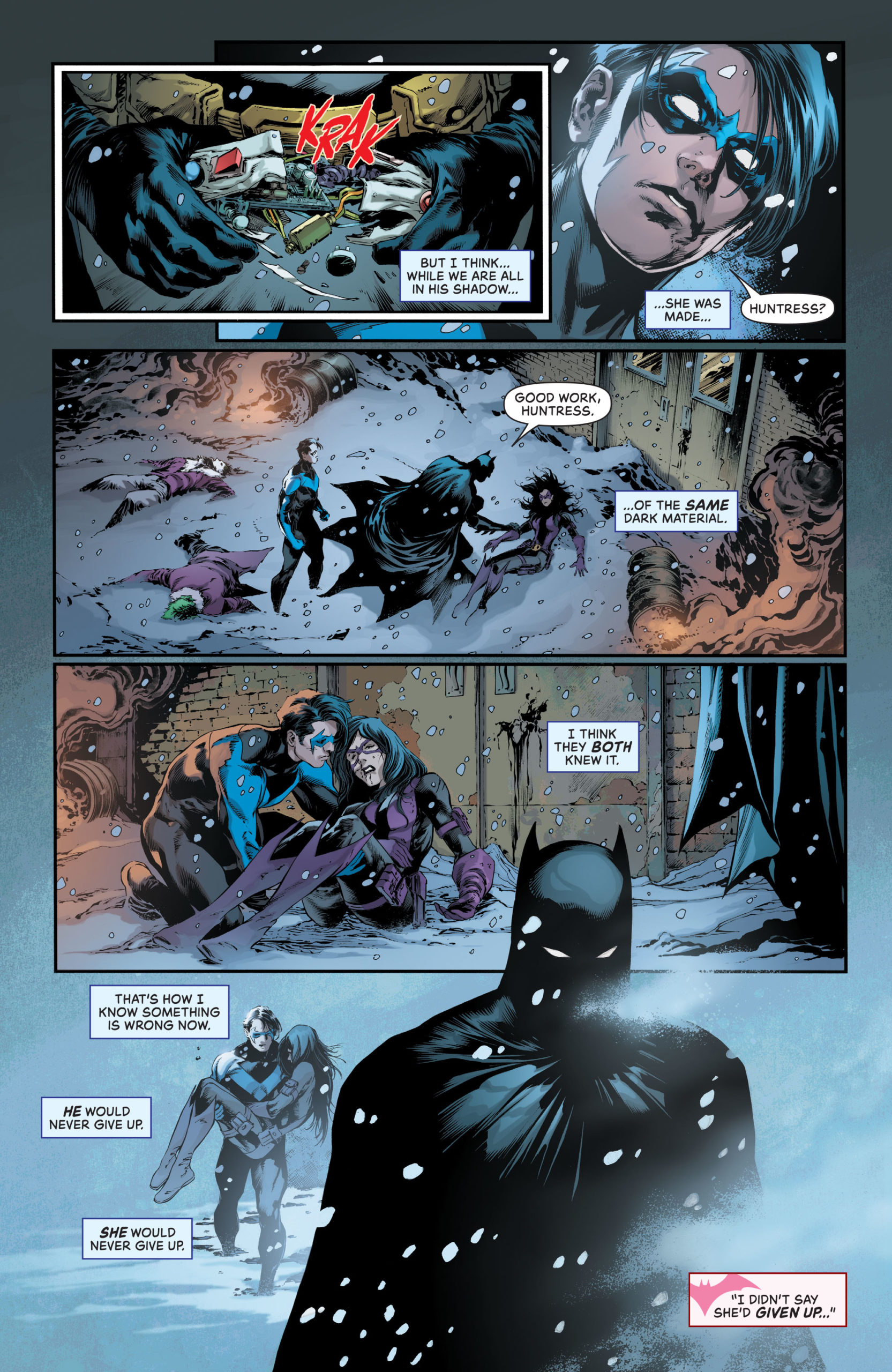 I applaud Matthew Rosenberg for using classic Dick Grayson Robin in the second feature.  He’s an unexpected surprise and while he doesn’t take down the Scarecrow, he slows him down enough that he has to abandon his initial plans.  It’s not quite clear what he’s doing with the boy, but it’s a good mystery so far.

We are also treated to a preview of Mark Waid and Dan Mora’s forthcoming Batman/ Superman: World’s Finest.  It’s a 10-page story that closes out the issue and seems to introduce the inaugural story arc for the series.  Aided and abetted by Tamra Bonvillain and Aditya Bidikar, it’s set in the past as Robin (presumable Dick Grayson is operating with Batman and they are in Metropolis to apprehend Poison Ivy.  The final panel teases a villain whose shadow appears to be…Magog…!

Finally, this issue comes with some really exciting variant covers, it will be a tough decision which ones NOT to buy!

Nope, nothing to see here…move along, please…! 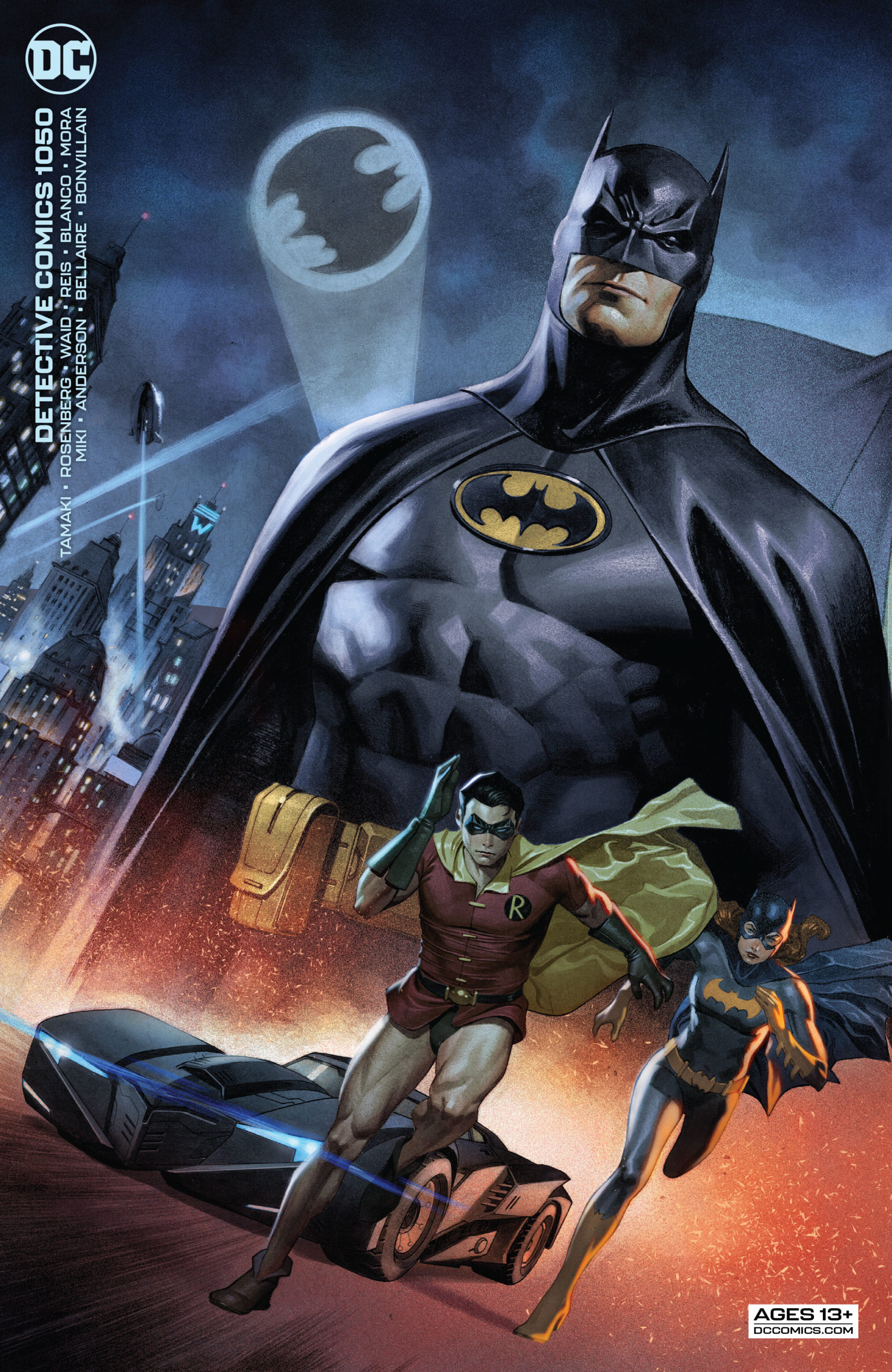 Four Chapters in and this is easily the best issue of an already great story arc.  The cover advertises this as the “Landmark 1050th issue” and the story inside Detective Comics #1050 delivers, and it’s especially satisfying for Dick Grayson and Huntress fans and those who see this assemblage of heroes as a family as Dick indicates in the opening panels of the issue.