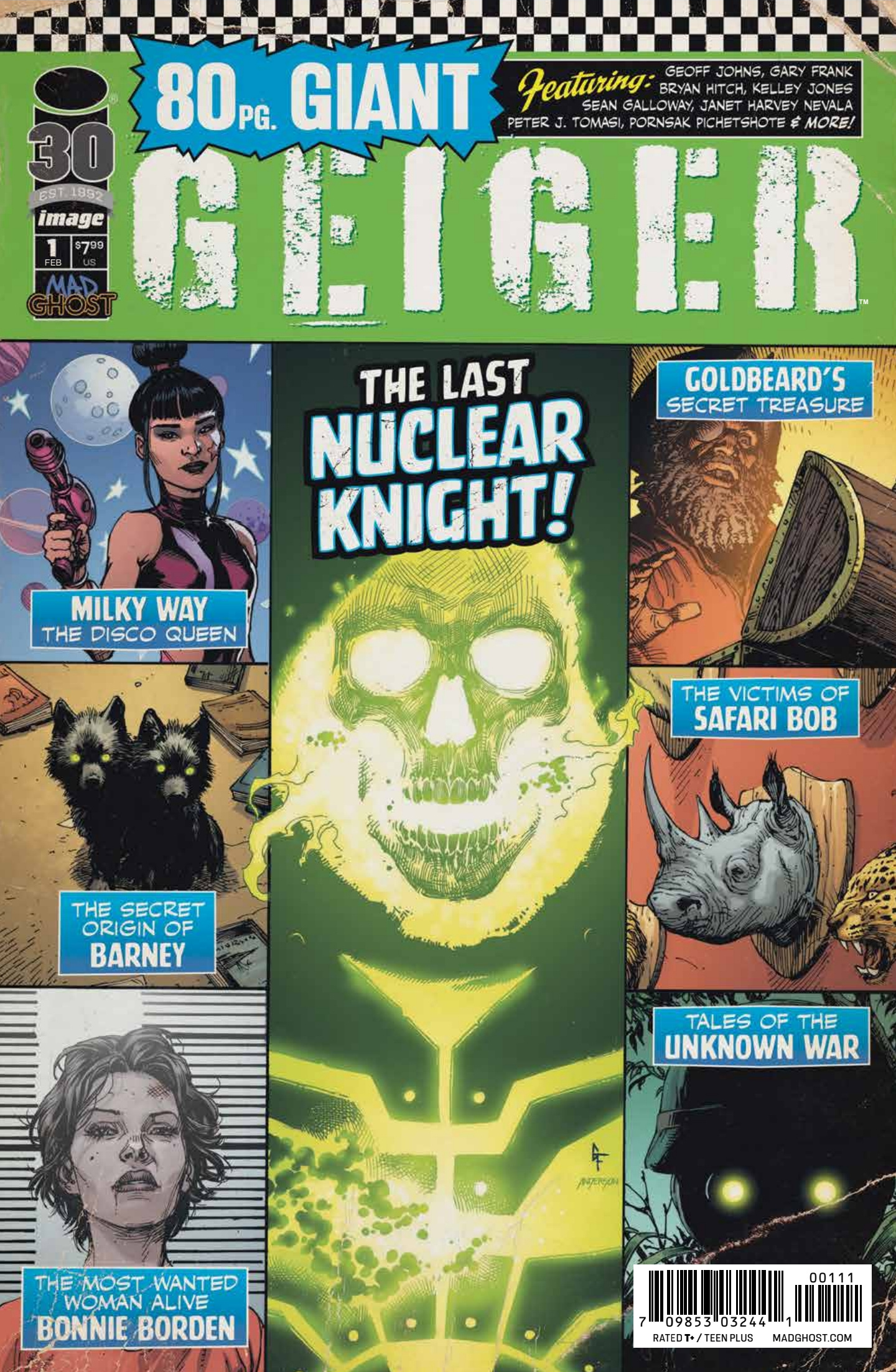 I really do love a big, meaty anthology, and the Geiger 80-Page Giant is an absolute winner, from cover to cover. In fact, this could be the best issue of the series thus far!

The first volume of Geiger (issues #1-#6) told the story of Tariq Geiger; husband, father, and scientist. After a limited nuclear exchange ravages America, our hero develops extraordinary powers and defends innocents in the irradiated wastelands of the Nevada desert.

Now, if all this sounds like the plot of a Silver-Age sci-fi comic, please don’t be put off. Yes, this is a premise almost as old as the medium, but what Geoff Johns, Gary Frank, and Brad Anderson created in those six issues is an homage to the comics of old, as well as a world… nay, universe-building tour de force, the likes we haven’t seen since Saga, or The Walking Dead.

Where to begin?!? This book is a fantastic read and looks stunning. The origin of Redcoat, like that of his predecessors, feels familiar and is also brand new. The new universe being built here is fascinating, but more importantly, is one that everyone can jump in on the ground floor with.

The Vegas casinos are fascinating, and terrifying at the same time, as are the characters that populate them. If you thought the King and his lair were bonkers, you ain’t seen nothing yet! We get sci-fi, horror, mutilation, and mayhem aplenty in these pages… so, be warned!

Plus, and this my favorite part; we get to finally see how Geiger met Barney! I love that fuzzy, two-headed future pooch sooooo much!

One of my favorite aspects of the Geiger 80-Page Giant is the great mix of industry giants like Geoff Johns, Gary Frank, Brad Anderson, Peter J. Tomasi, Bryan Hitch, Paul Pelletier, Kelley Jones, Staz Johnson, John Kalisz, and Hi-Fi, being joined by an army of red-hot new stars on the rise. I feel that the Mad Ghost Universe is just going to get better and better.

Oh, and the incomparable Rob Leigh lettered every page of this titanic tome himself. What a legend!

I think perhaps that some of the writers should’ve spoken to each other a little more, as a few of the tales are similar in tone and content. Thankfully they each end very differently and deliver a promise of even more action, horror, and intrigue to come. Oh… and they all look fantastic!

This bumper 80-page piece of loveliness gives us the third character in an ever-growing pantheon (after Junkyard Joe, and Tariq Geiger himself) and also delivers an in-depth look at the Las Vegas of this beautifully imagined dystopian future. We get terrific teases for the Junkyard Joe and Redcoat series, and the opening tale sets up a future conflict between at least two of them.

One gets the feeling that the best is yet to come.