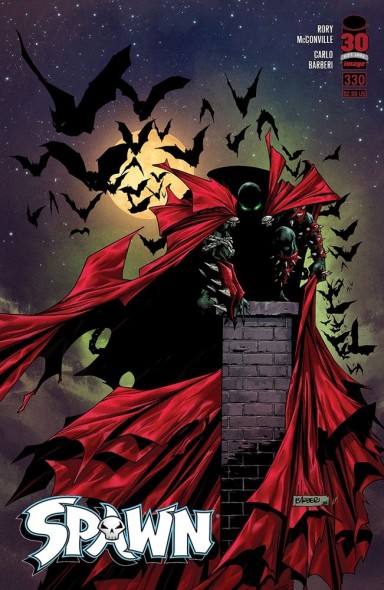 Spawn #330 –  Spawn has been burning the candle at both ends. Is he finally starting to slip? Jim Downing continues to seek allies to help pick up Spawn’s crusade—whether Spawn likes it or not!

Rory McConville  provides a catchup issue as we catch our breath from all the characters that have been introduced across the Spawn Universe, but also seeing Cy-Gor and Overtkill in one issue makes it pretty promising.  I can’t help but get the feeling that these two are on a collision course as Overtkill has been resurrected TWICE now and that brain is akin to an old Incredible Hulk persona.

He doesn’t think too promising of Al right now. Jim Downing is either pulling a mutiny or going to help Al out as we are looking at a team divided if you combine this issue with some Scorched action from last week.

That is the beauty of all the Spawn books as they are on a continuous adventure that fills in some blanks and lets some writers like McConville spread their wings.

The baddies getting bigger and bigger and arguably Spawn keeps getting smaller and smaller in his thinking. The Forsaken is drawn more so like a character out of those Transformer movies.  I appreciate the detail, but there is barrier after barrier in this storyline as we as readers are attempting to piece where this new journey as Spawn/King Spawn is taking us.

Tom Orzechowski’s lettering is the formula that allows us to know we are in the original Spawn setting.  The other books use this book as home base, but Tom O has as much to do with that as Todd McFarlane.  You don’t need a score card to know who is up to bat as his lettering raises the bar each and every issue!

This story line is dragging.  Spawn is the center of it all.  In The Scorched, he is losing his patience with the other members of his so-called team.  Jim Downing and Medieval Spawn (and soon Overt Kill) are going to go out on their own and arguably recruit some other Spawns.  We may have a Civil War before these books really get going.

My thought process is that Todd needs to devote more to the story telling as his artists are firing on full cylinder.  I would love for him to draw a page or two or five or an entire issue once in a while.  But this script needs to be taking me some where as we are a bit stuck in the mud in the Spawn book specifically!

Spawn #330-  Cy-Gor and Overt Kill…I’ve loved them since the first few issues, and to have them back in full action is going to be great.  McFarlane and company need to go ahead and play their hidden script cards as this book is slowly dragging behind King Spawn, Scorched, and the Crown Jewel in the series right now – GunSlinger Spawn!