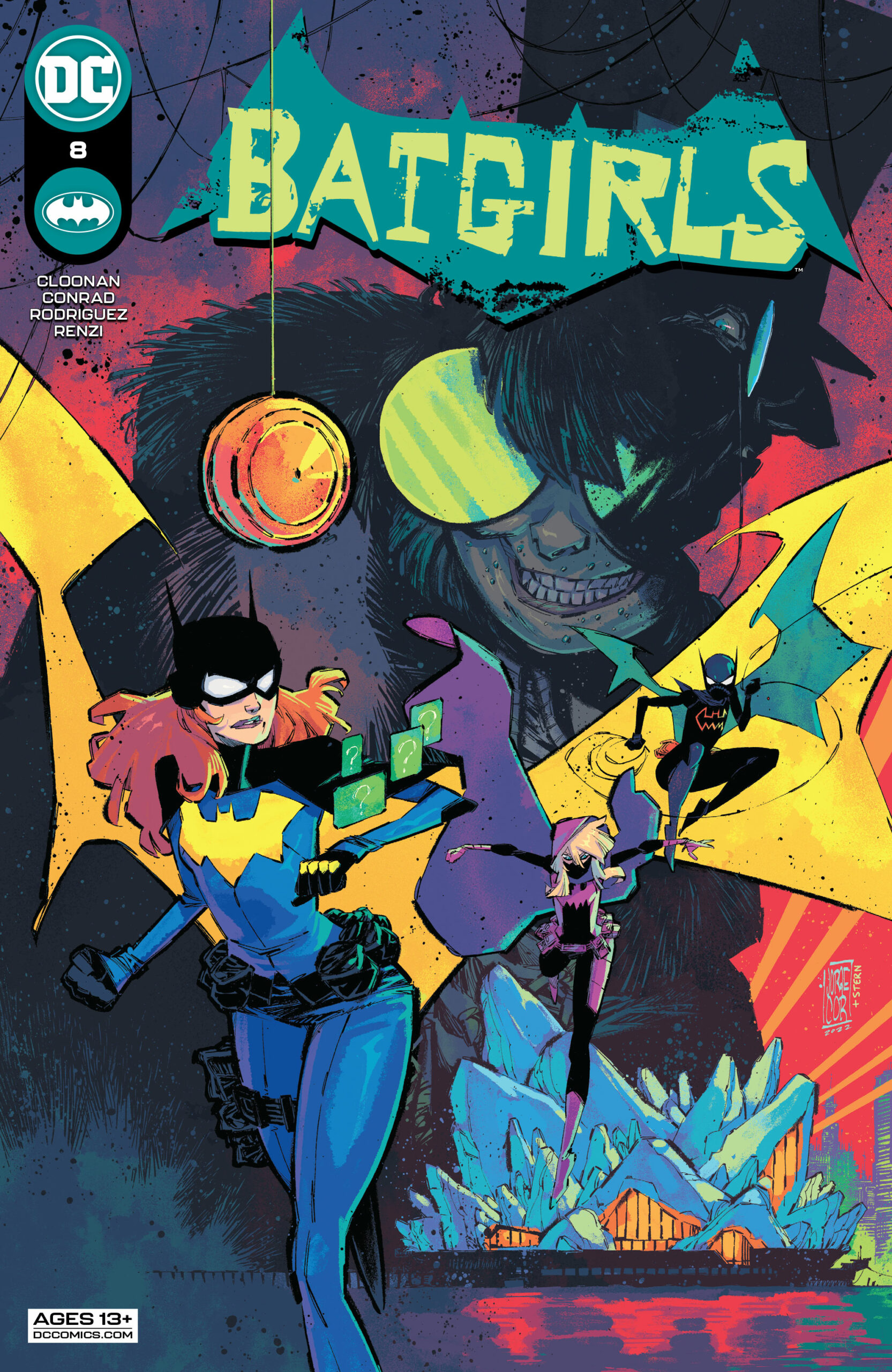 The Batgirls have to rescue Seer from the Saints in the Penguin’s Iceberg Lounge!  But, don’t forget, this is also a love story…

By this point, it should be obvious that it’s not the plot that makes a book.  Sure, it’s got to be somewhat interesting, but how many times can Batman stop the Joker or Superman foil Luthor’s plans.  It’s been over 80 years, right?  What keeps readers coming back?  It’s the details, right?  It’s the subtleties, the small things that differentiate plots.  Batgirls #8 shows why it’s these details that matter.  It’s these details that warm your heart and make you smile. 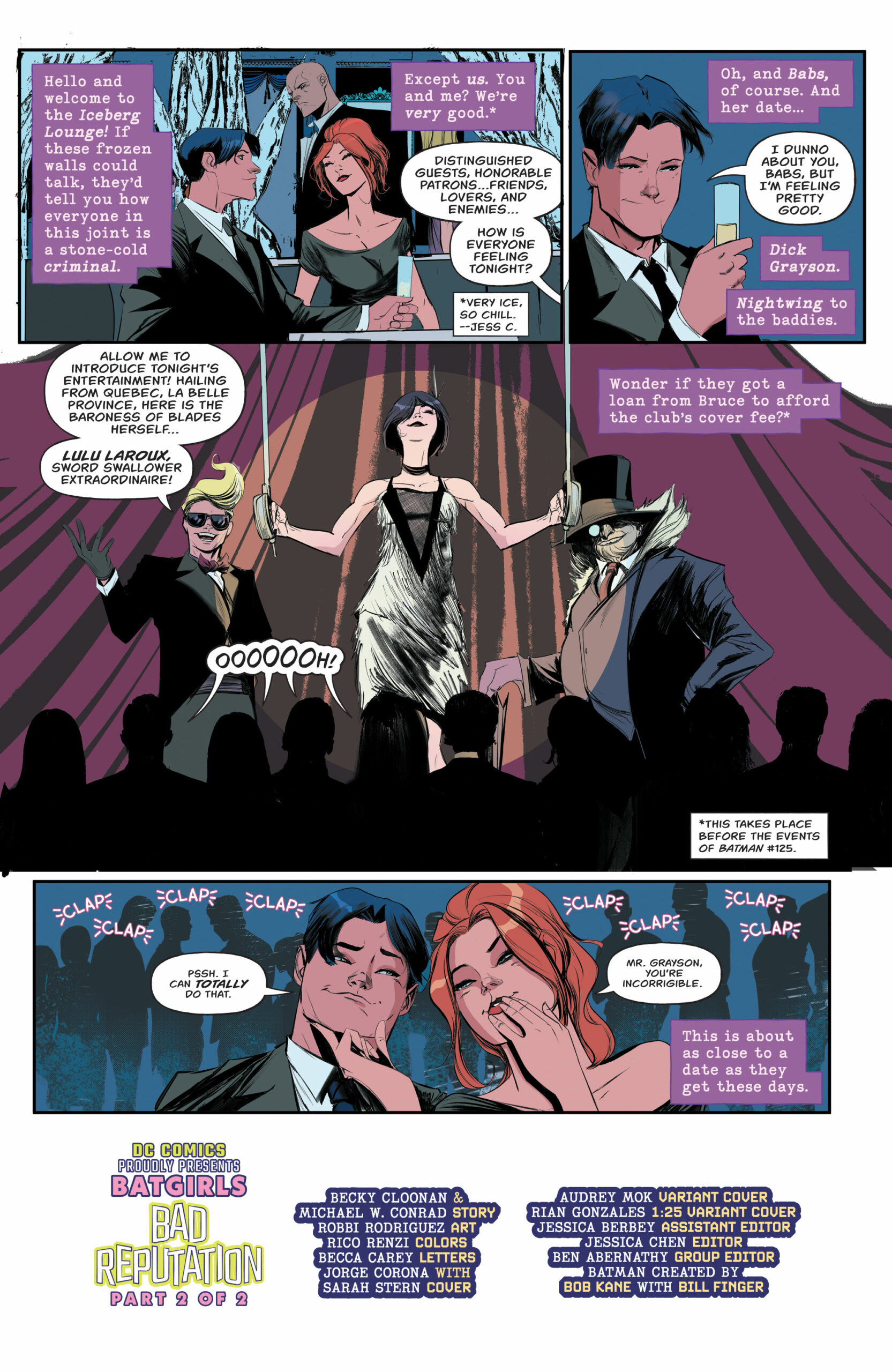 In broad strokes, the humor in this title is a lot of fun.  It’s not silly, it’s just the right amount without turning it into a straight comedy or parody.  It’s cinematic in this way, with some lighter moments to balance the action.  We all seem to want to laugh in an action flick as well as be thrilled.  So, when Lulu falls down the elevator shaft, the Batgirls’ reaction provides the reader with this type of moment: “Do you think we should help her?”, “When I get my hands on you Batgirls…!” “On second thought, Lulu sounds fine. Let’s go find Oracle.”  Yep, perfect. Speaking of Lulu, I hope she’s not a one-off, a sword-swallowing sword master is interesting.  Hope she returns, it’s just hard to wrap my mind around an evil Canadian.

Much of Batgirls #8 revolves around Dick and Babs as a couple. These are the details that really separate this title.  I’ve said it before, this comic is a perfect sister book to Nightwing, where we get another perspective on Dick and Babs’ relationship. There are fun moments as Cass and Steph tell Barbara all she and Nightwing are doing is flirting while undercover instead of doing any real detective work. Then we find out that when the Batgirls are all back home Babs is wearing Dick’s underwear as they are lounging around debriefing. More fun moments

It’s these details that elevate the book. These are character moments that are clever and, in terms of the underwear, it just feels real and imbues a real-world moment into the lives of these characters. 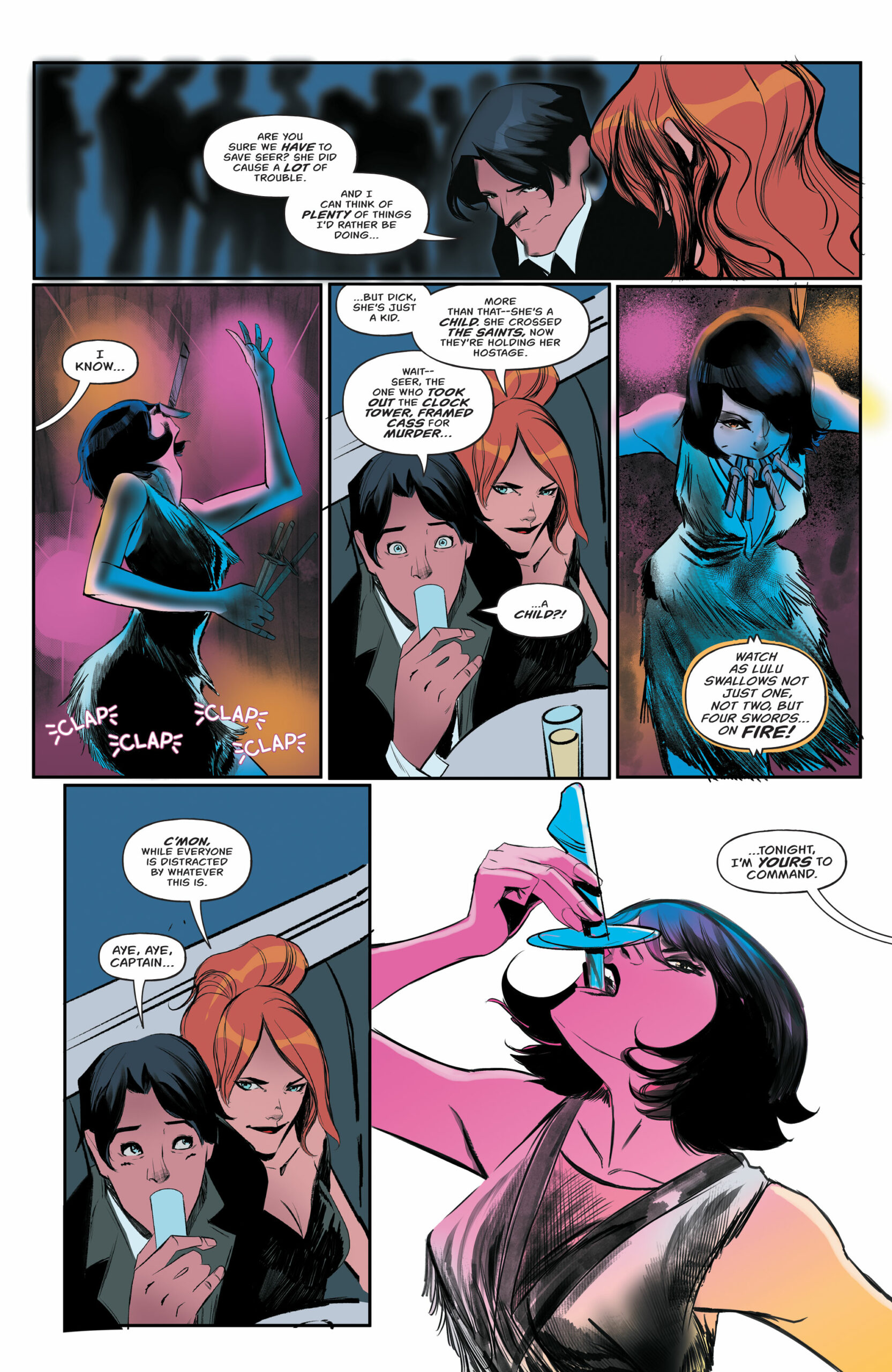 It’s not all fun and games, as Barbara is shown to have a legitimately complex view of Seer.  Despite the mayhem she’s caused, the Batgirls have to save her from The Saints.  Maybe that’s a bit of a no-brainer, Seer is just a kid, but when Babs admits to having some respect for her computer prowess, it makes things even more interesting.  Sounds like Babs would like to reform her… another bat in the cave… or a bird in the tower?

In Batgirl and the Birds of Prey, written by Julie Benson and Shawna Benson, there was a hacker that joined the team after initially being an adversary of sorts, a fake Oracle. It’s an intriguing concept. Can Seer be rehabilitated? Babs has a record of mentoring heroes, indeed Batgirls casts Barbara in this role much as she was in the Pre-New 52 Batgirl which told the story of  Stephanie Brown’s first turn as the character. 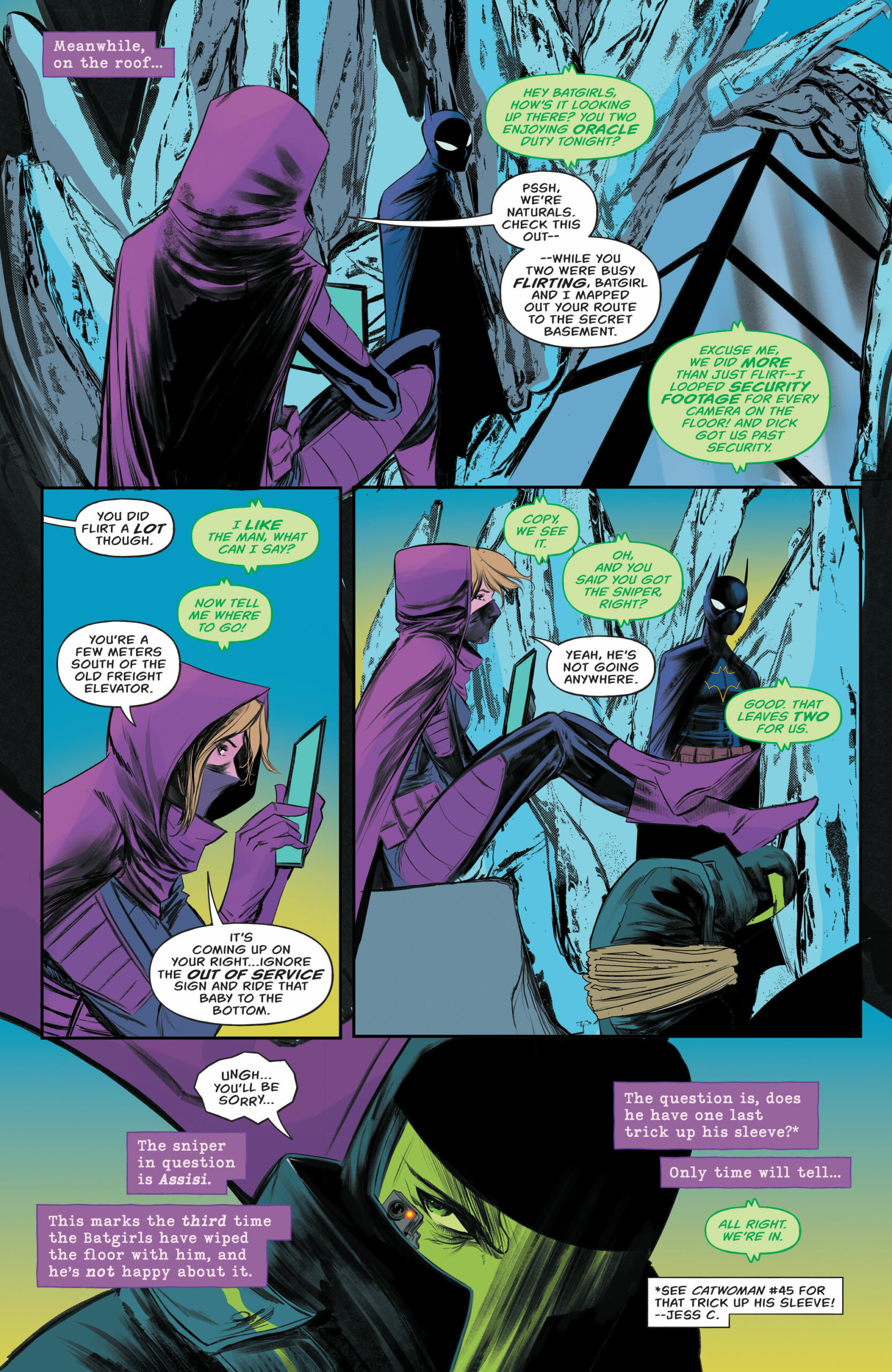 Robbi Rodriguez has some nice moments in this issue including a silhouetted Babs entering a dark room for an “ooh” moment. Rodriguez also finds the right body language for each character. Dick and Babs share a closeness that supports their feelings.  However, there’s a wonderful homage to Black Canary on the t-shirt Steph is wearing at the end of the issue.  Rodriguez has recreated the cover image of Black Canary from  Flash Comics #92 (February 1948.)  Though she first appeared in Flash Comics #86 in a Johnny Thunder story, she gained her own feature in #92.

Batgirls #8 ends with a touching moment between Dick and Babs as he lures her out onto the fire escape for some tender words and a good night kiss.  It certainly feels like these two are headed to the altar between this series and their appearances together in Nightwing. What a great way to end the issue! 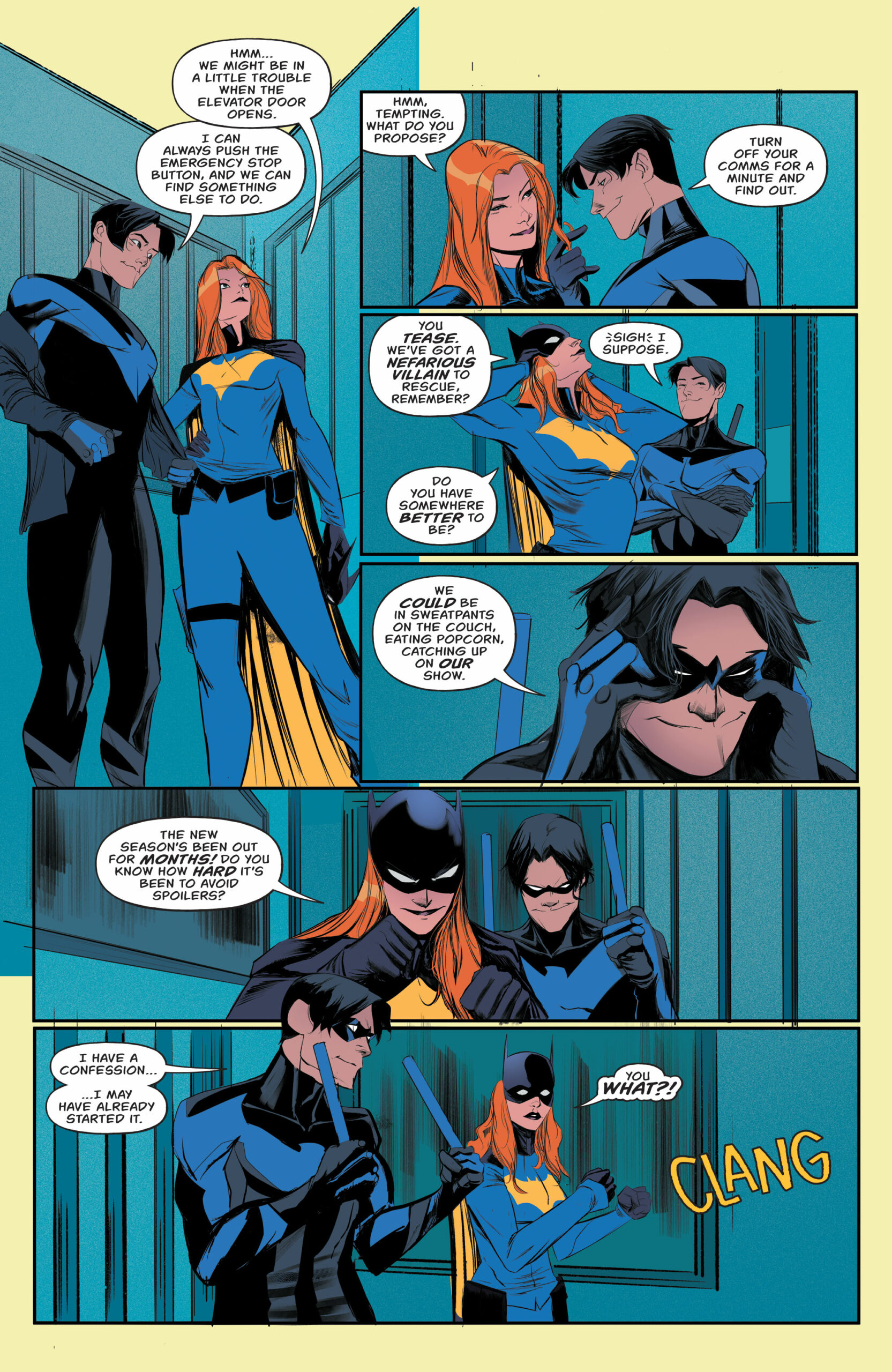 I’m just sort of stunned.  This is a wonderfully complex title with fun and touching relationships.  The series gets the details right, the details that make the characters engaging and relatable to the real world.  You’re pulling for these guys!  Not just Dick and Babs, but Steph and Cass, as well as they, are sort of carving out their own superhero family as a subset of the larger Bat family.  The overall vibe is one of positivity, and it’s lovely.