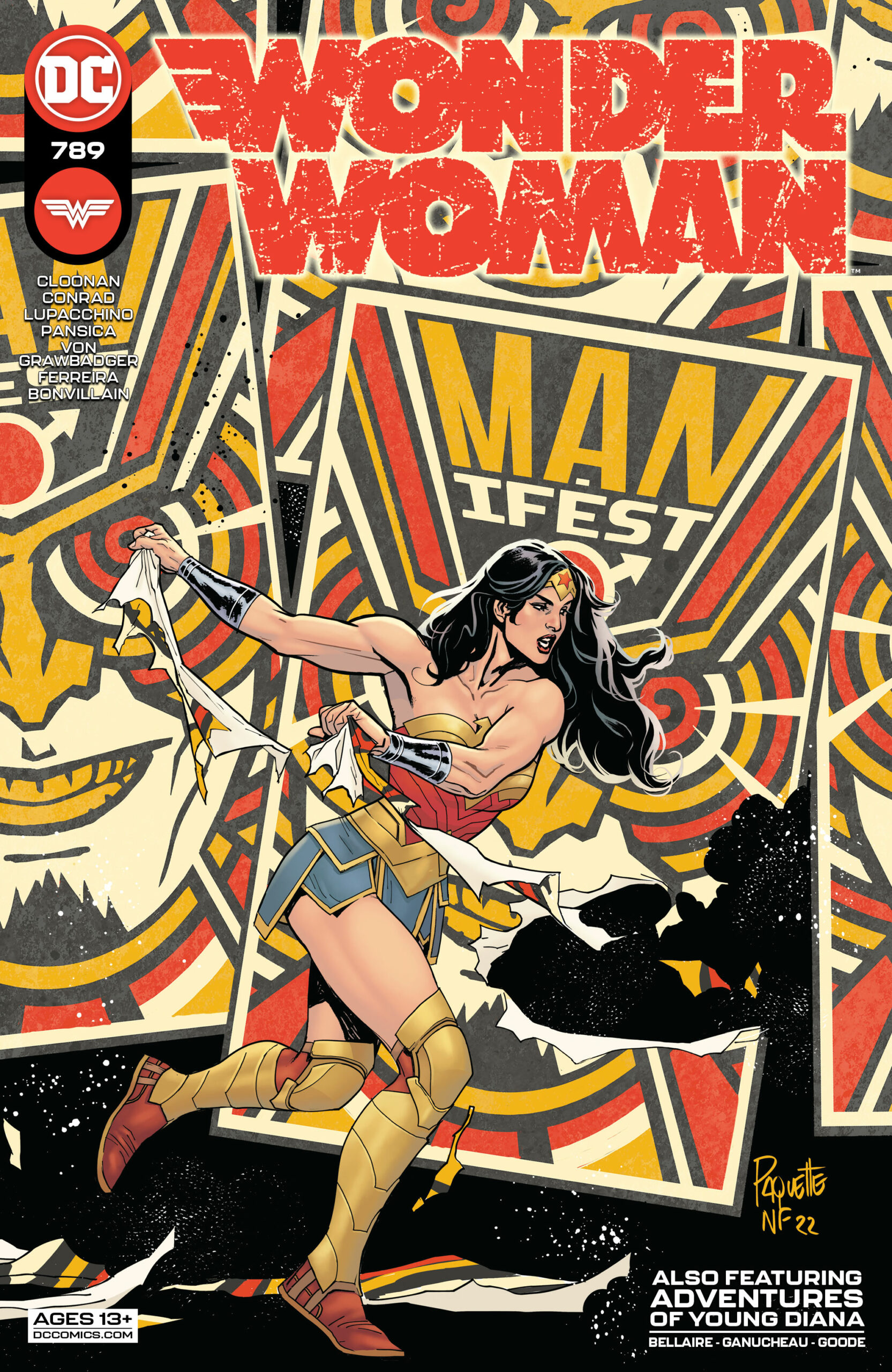 Dolos, the Duke of Deception is unleashed upon Wonder Woman and her allies.  Though Dr. Psycho faces a setback, Villainy, Inc. seems to get the upper hand. 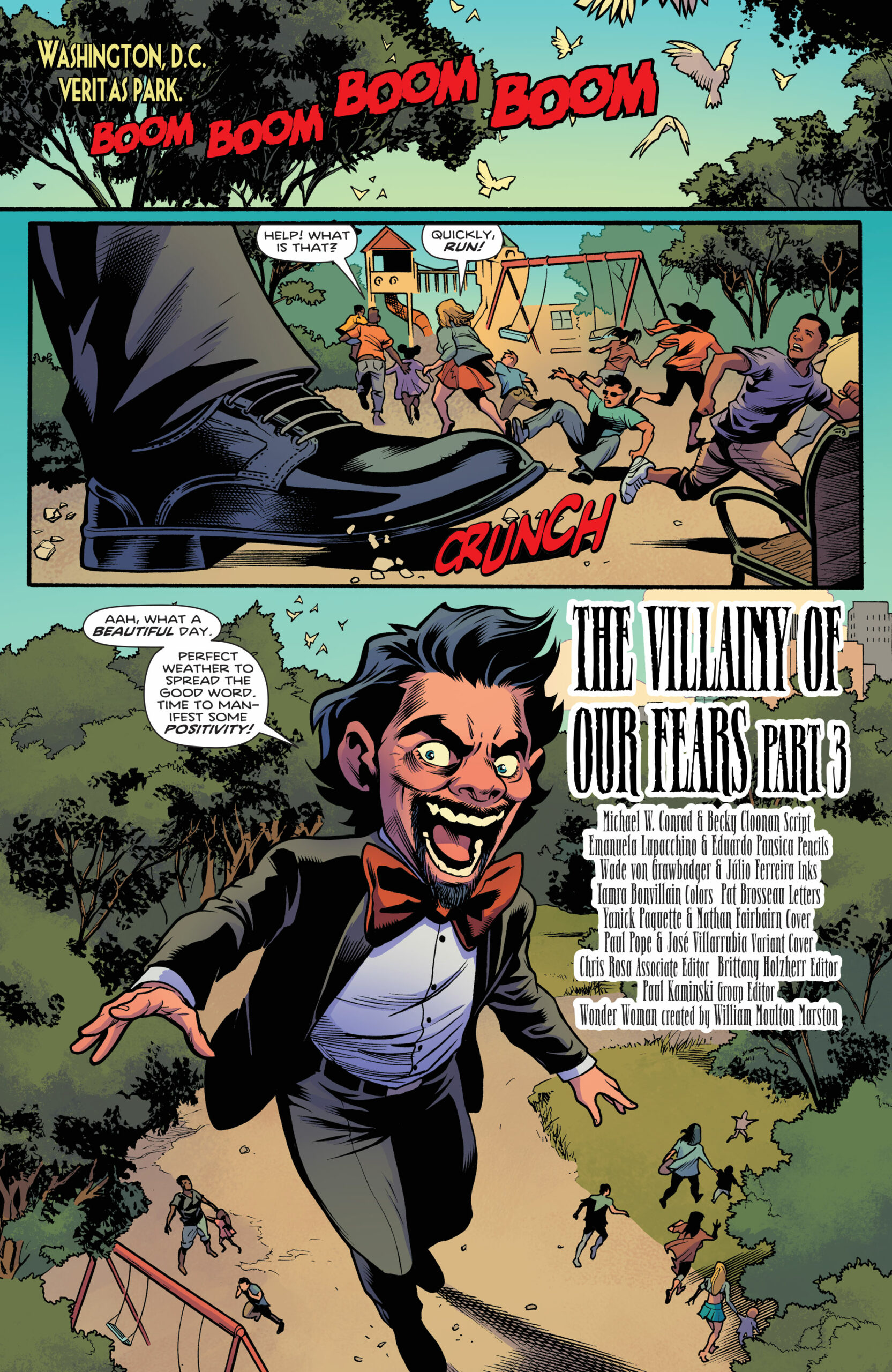 Since the beginning of their run, Conrad and Cloonan have been building a lot of subtext in the themes in Wonder Woman.  Issue #789 is no exception.  This remains one of the cleverest elements of the run and adds so much extra to the reading experience.  My review of the last issue contains a fair amount of discussion on these elements. That said, they continue to be a strong element, however, I will refrain from referencing them too much in order to avoid redundancy.

One of the themes that stand out is men vs. women, which is likely a commentary on toxic masculinity. It certainly feels that way.  It seems to go hand in hand with some politically suggestive satire.  It’s not hard to see.  This is all beneath the surface stuff and it’s only part of the story. 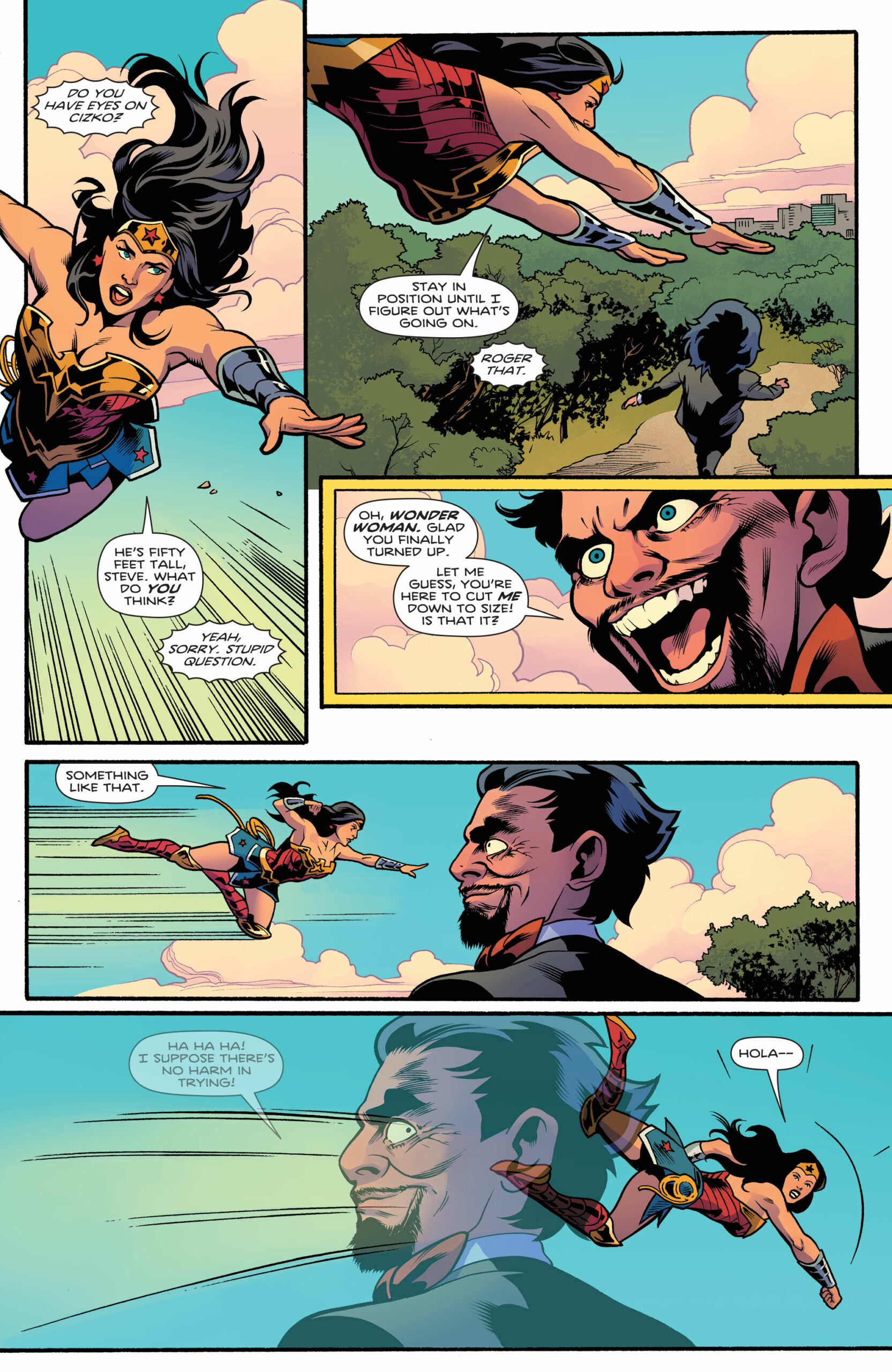 Wonder Woman’s supporting cast is really developing into an effective ensemble.  Diana already has her Amazon family of sisters and her superhero family of Wonder Girls, but Steve, Etta, and now Siggy comprise a team/family for Diana beyond outside her costumed allies in the Justice League.  It’s an enjoyable development to see Diana rely on them instead of being stuck in a solitary situation with no one to turn to or even talk to.  As a wise man once wrote, “nothing can survive in a vacuum, no one can exist all alone.”  It reflects the reality of human relationship needs.

After looking underneath the surface and between the lines, it’s also nice to see that Villainy, Inc. is providing a real challenge to Diana and her friends. With so much going on, it’s easy to forget who’s involved- one can get lost when contemplating the subtext so when Dr. Poison pops up out of nowhere, it’s not just Sigfried who is “surprised.”  Plus, Dr. Psycho is presented in such a manner that it’s easy to forget that there are still others funding his plot. It all adds up to a solid mystery and good adventure tale. There’s also a real moment of vulnerability for Sweetheart, Diana’s double from the mirror world.  It’s touching and leads one to believe she may not be beyond rescuing from Psycho’s clutches. 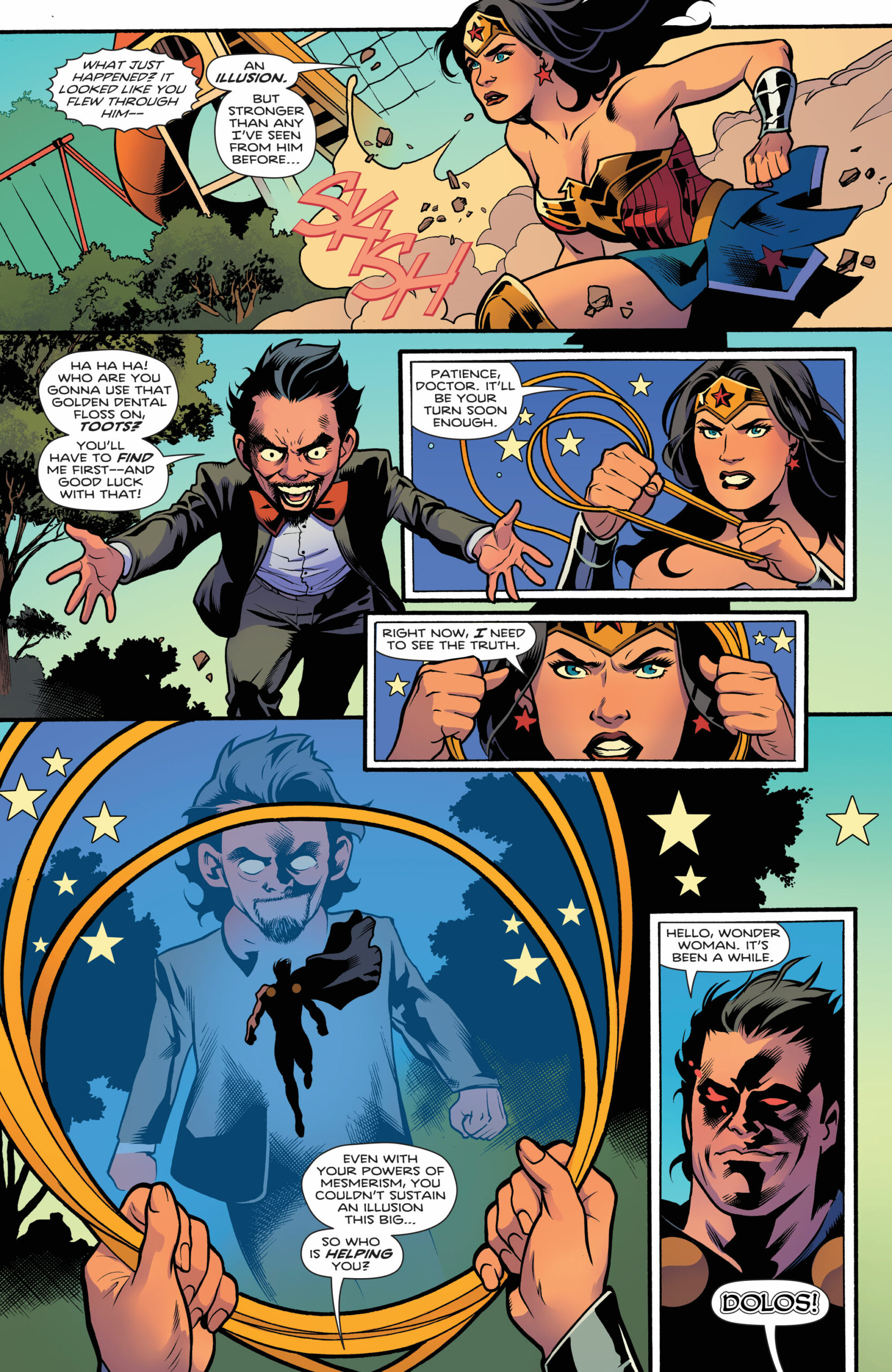 In “The Adventures of Young Diana” we continue to explore the differences between Antiope and Hippolyta as Diana seems to be experiencing a “grass is always greener” moment.  She makes the youthful decision to try and be everything Antiope is and her mother isn’t.  We know that as an adult Diana comes to respect her mother and her position greatly, so it’s an interesting juxtaposition to see her at odds with Hippolyta.  We are certainly leading to another lesson learned for Diana.

While I find all the subtext fascinating, I can understand not all readers will respond to it. It’s certainly something that elevates the title and is not a negative, but it’s one of those elements that may not appeal to all readers. 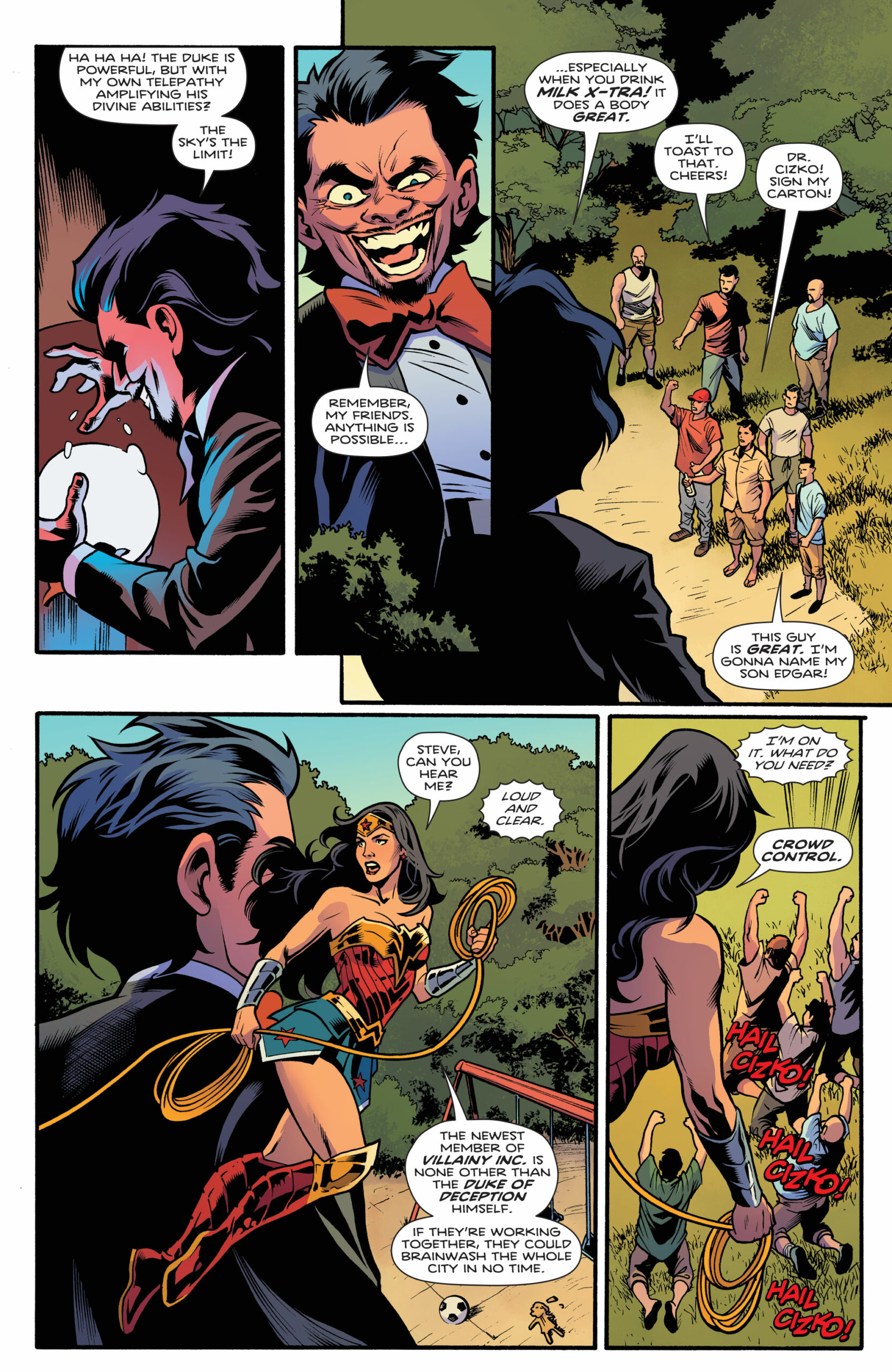 Wonder Woman #789 is an issue that succeeds on multiple levels. On the surface, it’s an interesting adventure with a mystery that keeps you guessing while showcasing the camaraderie between Diana and her allies. At the same time, there’s a lot of subtext about the history of the Wonder Woman character that connects to pertinent political and social themes.  It’s more than your ordinary comic and it makes you think.