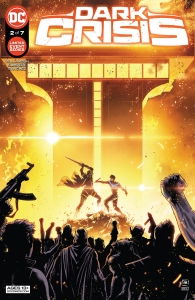 Dark Crisis #2: As the good people of the world mourn the loss of the Justice League, the forces of evil have seized the opportunity to wreak havoc in a world without its heroes! Leading the charge is a super-powered Slade Wilson…but this time there’s something dark fueling his rage. With a massive army laying siege to Titans Tower, only Nightwing will have what it takes to stand in the way of Deathstroke’s forces-but is this a fight Dick Grayson can win? Look, up in the sky-reinforcements are on the way! It’s a bird! It’s a plane! It’s…uh-oh…it’s Cyborg Superman. The world burns as Pariah and the Great Darkness make their play for planet Earth in this jaw-dropping second issue!

Dark Crisis #2 begins with a brief recap of Pariah’s origin, reminding us that the character arose out of the original Crisis On Infinite Earths. Through this retelling. Pariah explains that his motivation for his recent villainous actions is to reverse that Crisis and bring back DC’s original Infinite Earths.

This means that Pariah has bought into the idea that the end justifies the means. And this allows him to see himself as the hero, despite unleashing massive death and destruction. This reminds me very much of Hal Jordan as Parallax in Zero Hour, one of DC’s more successful crossover events. Hal was willing to destroy everything to recreate a better universe, but Pariah wants to recreate an entire Multiverse.

It also raises the question of how killing the Justice League is supposed to accomplish this. To me, this seems a pretty clear indicator that he did more than simply end their lives. He’s somehow using them as part of his plan to restore the original DC Multiverse. 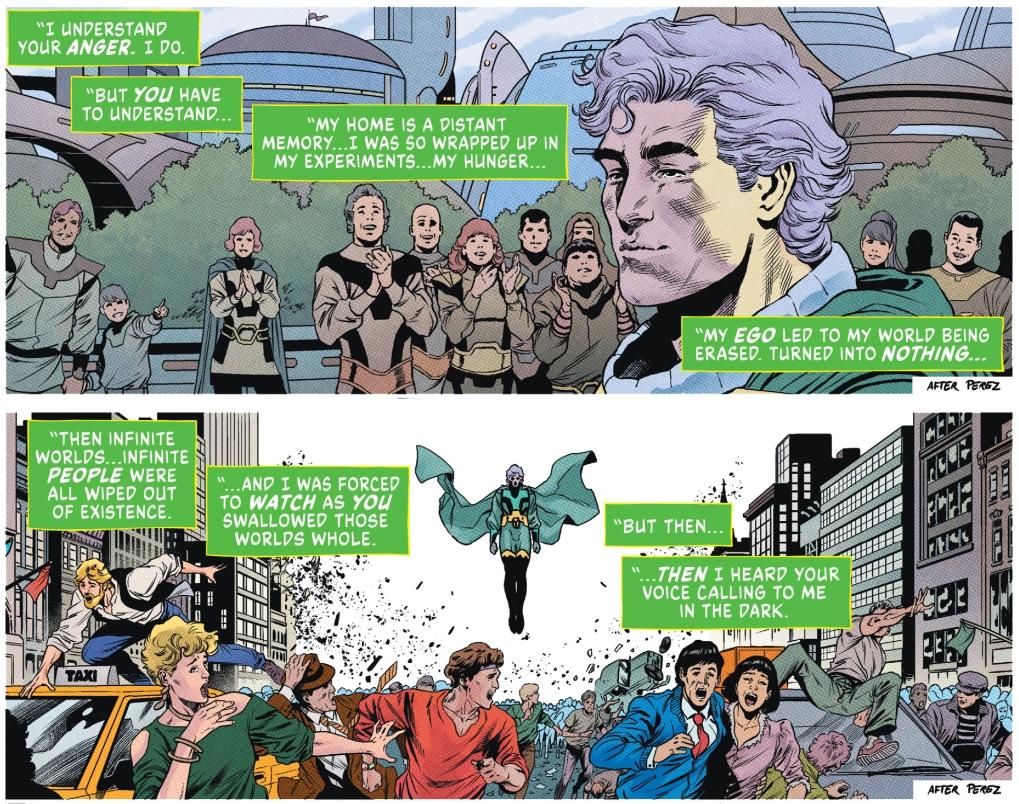 We also see the conclusion of Deathstroke and his Secret Society of Super-Villains on Titans Tower. The fight goes poorly for the Titans, eventually coming down to a one-on-one fight between Nightwing and Deathstroke. I really like this idea, as Deathstroke is, at his core, a Titans villain. And there is a special enmity between him and Nightwing. I really think DC should concentrate on building Slade up as Dick’s arch nemesis rather than as an antihero. And it looks like they actually might be taking the character in that direction.

The fight ends rather abruptly, as Superman shows up at the last moment to prevent Slade from killing Nightwing. Slade wants to press his victory and finish off the Titans, but Pariah pulls on his leash, commanding “Do not kill the superheroes. I need them. Remember your mission. Sow chaos, create a Crisis… Bring my Dark Army to you”.

This reveals another interesting part of Pariah’s plan. Apparently, a Crisis is necessary for it to succeed. I wonder if this is connected to the “Crisis Energy” that figures in Dark Nights: Death Metal.

Deathstroke’s motivations are interesting as well. His particular beef seems to be against the idea of legacy. This fits with the character’s history. After all, his son Grant was attempting to follow Slade’s legacy when he was killed during an encounter with the Teen Titans, a group consisting mainly of sidekicks continuing the legacy of DC’s greatest heroes.

The thing is, his motivations clash with Pariah’s. Deathstroke just wants to put an end to legacy superheroes, not destroy the world. It seems obvious that Pariah will betray Deathstroke. Is Deathstroke planning to betray him first, or will the Great Darkness betray them both? The DCU’s villains allied against the world’s heroes. It’s clear, though, that this alliance is built on very shaky ground. 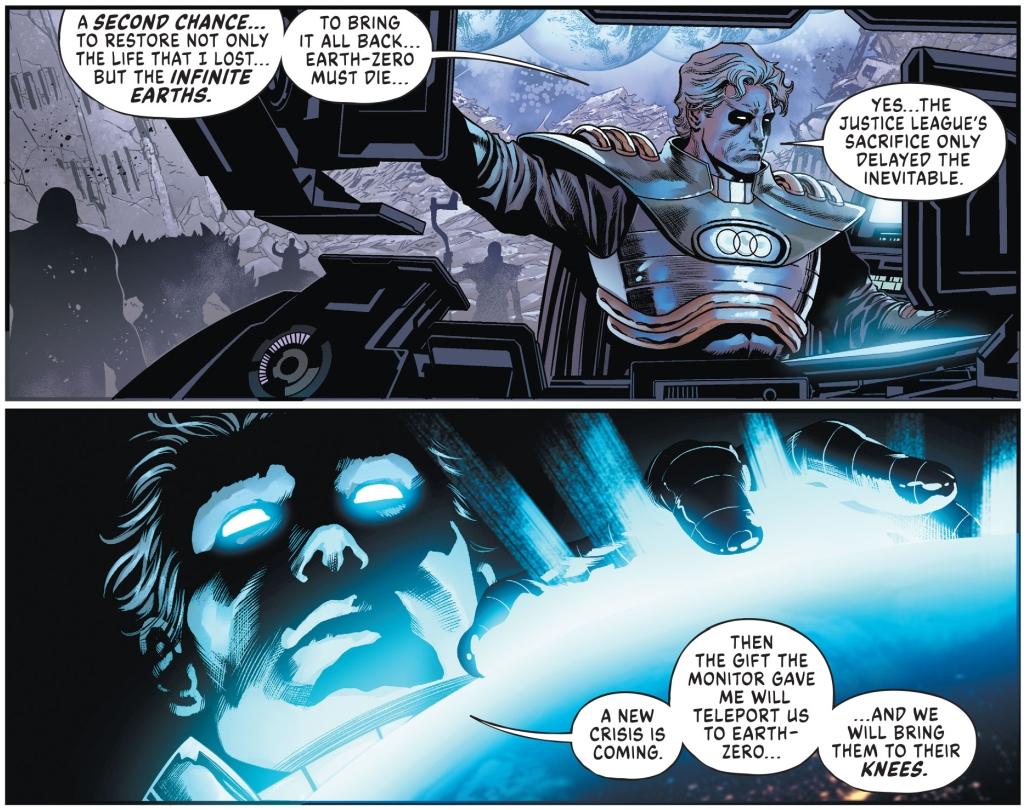 We also see Black Adam put in an appearance during the battle’s aftermath. He expresses his contempt for Jon’s attempt to lead a new Justice League as well as disappointment in Dick’s leadership of the Titans. He then declares his intention to take over leadership of the new League: “It is my burden to lead this team”. Black Adam is another villain that’s been cast as something of an antihero in recent years. His recent appearances in Justice League have even had him going through a redemption arc. But is he the right leader for the team? Is leadership of the League even right for him?

Daniel Sampere’s artwork in this series is nothing short of fantastic. It seems that a new Justice League title will inevitably arise out of this event, and I would love to see DC tap Sampere for that job. This series has a huge cast of DC characters and he absolutely nails the look of each one. And he does a masterful job of depicting this issue’s explosive fight sequences.

With two masters like Joshua Williamson and Daniel Sampere on the job, there’s little to complain about as long as they keep up the level of quality they’ve already established, then I’m happy.

DC’s had mixed luck with their major event series over the years, but it looks like Dark Crisis is shaping up to be one of the better ones. Williamson and the other DC writers have put a lot of care into planning this story and it shows. I can hardly contain my anticipation to see how Williamson’s story will play out.