This November DC Comics asks readers to remember the ’90’s.  Mullets?  Electric Blue Superman?  Matrix Supergirl?  Broken Bat-backs?  What does the publisher have in store for readers?  DC has shared the following press release with solicits to get everyone up to speed!

DC REWINDS TO THE 90s IN NOVEMBER

The 1990s brought about some of the greatest moments in comics, including Wildstorm’s debut, Batman/Spawn crossovers, The Death of Superman and amazing covers that were reflective of the unique time in history. This November, DC is celebrating everything 90s with new Wildstorm and WildC.A.T.s comic series, special variant covers, reprints of classic comics and more.

Spinning from the pages of Batman: Urban Legends, writer Matthew Rosenberg (Batman: Urban Legends; Task Force Z) and Artist Stephen Segovia (I Am Batman; Spawn) are bringing back WildC.A.T.s for the first on-going series in over a decade! The team must work together in the shadows of the DC Universe to make the world a better place but they quickly come across one of their biggest threats, The Court of Owls!

“WildC.A.T.S. has always been a mix of everything I love in comics,” said Writer Matthew Rosenberg. “From the very first issue it exploded off the pages with the coolest characters, the most gorgeous art, the craziest ideas, and it was never afraid to be subversive, go harder, and push things further than its contemporaries. Now we’re smashing all of that good stuff full speed into the heart of the DC Universe. I’d say we’re going to be respectful and try not to break things…but that would be a lie.”

Spinning from the pages of BATMAN comes the senses-shattering new series! The HALO Corporation has gathered a motley crew of operatives, led by Cole “Grifter” Cash, who are going to make the world a better place…no matter who they have to kill! Working in the shadows of the DC Universe, this new covert team has been tasked with gathering an elite group of scientists for the first phase of their plan…but the ‘Cats mysterious leader, Void, might have other plans! 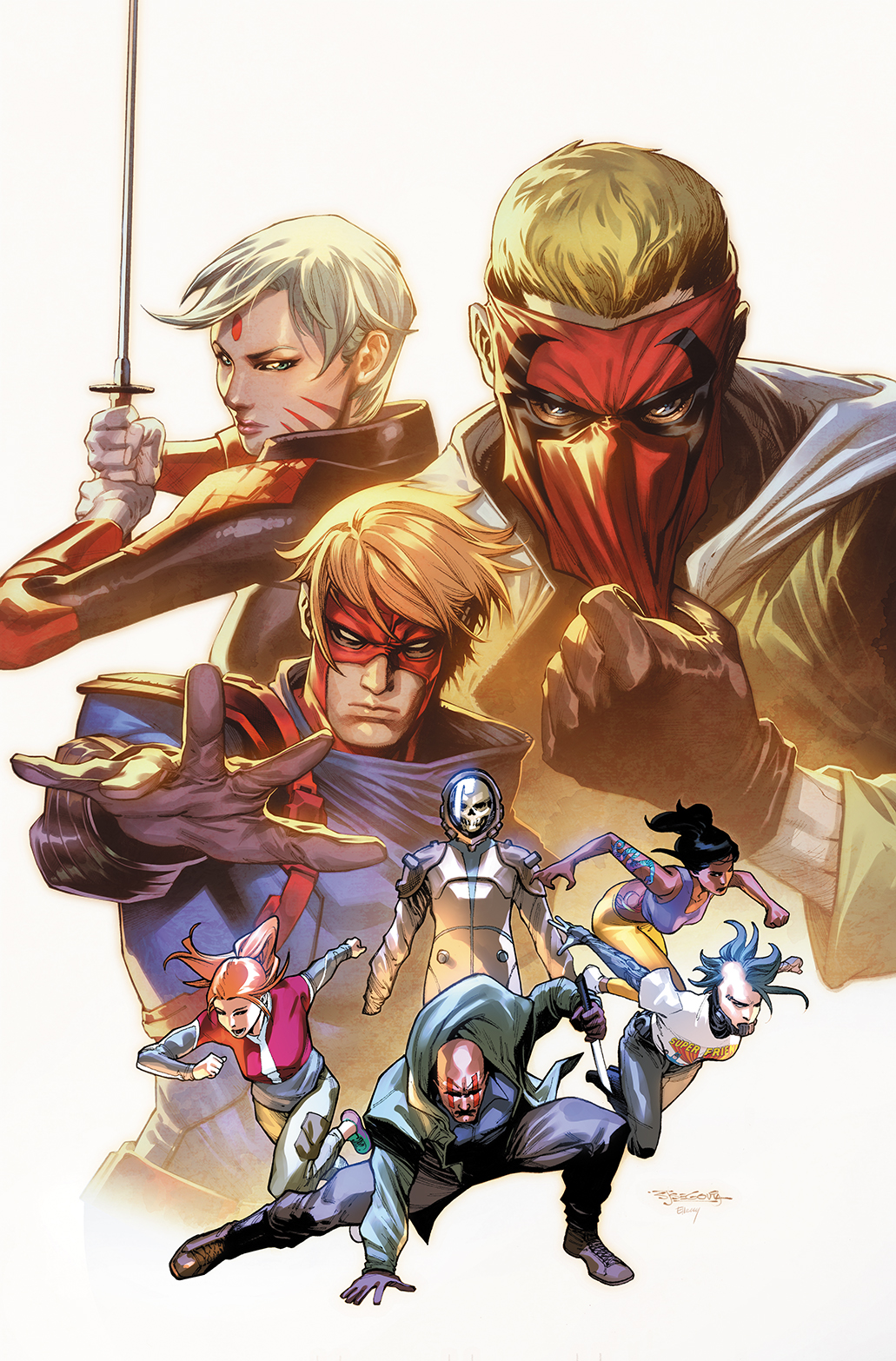 Art and cover by STEPHEN SEGOVIA

The mission has gone sideways for the ‘Cats team as they inadvertently run afoul of the LAST group they wanted to cross paths with…the Court of Owls! It’s the fight of the year with Talon vs Zealot!

Art and cover by STEPHEN SEGOVIA

The celebration of the WildStorm anniversary continues with the four-issue Waller vs. WildStorm miniseries from DC’s Black Label. Deep in the heart of the American intelligence apparatus, an ambitious young woman named Amanda Waller has some dangerous ideas about how metahumans can help to end the Cold War, and she’s willing to cut straight through Stormwatch’s Jackson King—and investigative journalist Lois Lane—to make them a reality. Waller Vs. WildStorm teams up national-security reporter Spencer Ackerman (The Daily Beast, Reign of Terror) with comics and video game writer Evan Narcisse (Spider-Man: Miles Morales, Gotham Knights) and veteran artist Eric Battle (Aquaman, Kobalt) for a story that combines the tone of pitch-black spy thrillers like Sleeper and StormWatch with DC’s Deathstroke, Checkmate, and Suicide Squad!

In the early 1980s, as the Cold War stubbornly refuses to thaw, a new battle heats up…for the soul of the intelligence agency Checkmate. As the agency’s super-heroic public face, Jackson King—a.k.a. The armored Battalion, former leader of Stormwatch and the symbol of American might—has long suspected that Adeline Kane is up to dirty tricks overseas, engineering horrors that betray everything he believes about service to one’s country. But King doesn’t know that Kane has a clever new ally—an ambitious young woman named Amanda Waller. She has her own ideas about how metahumans can serve their country. And honor, dignity, and long lives don’t factor into them… National-security reporter Spencer Ackerman (The Daily Beast, Reign of Terror), comics and video game writer Evan Narcisse (Black Panther, Spider-Man: Miles Morales, Batman: Gotham Knights -Gilded City), and veteran artist Eric Battle (Aquaman, Kobalt) celebrate WildStorm’s legacy of espionage-flavored superhero morality plays, pitting Stormwatch against the deadliest people in the DCU—including Deathstroke himself! 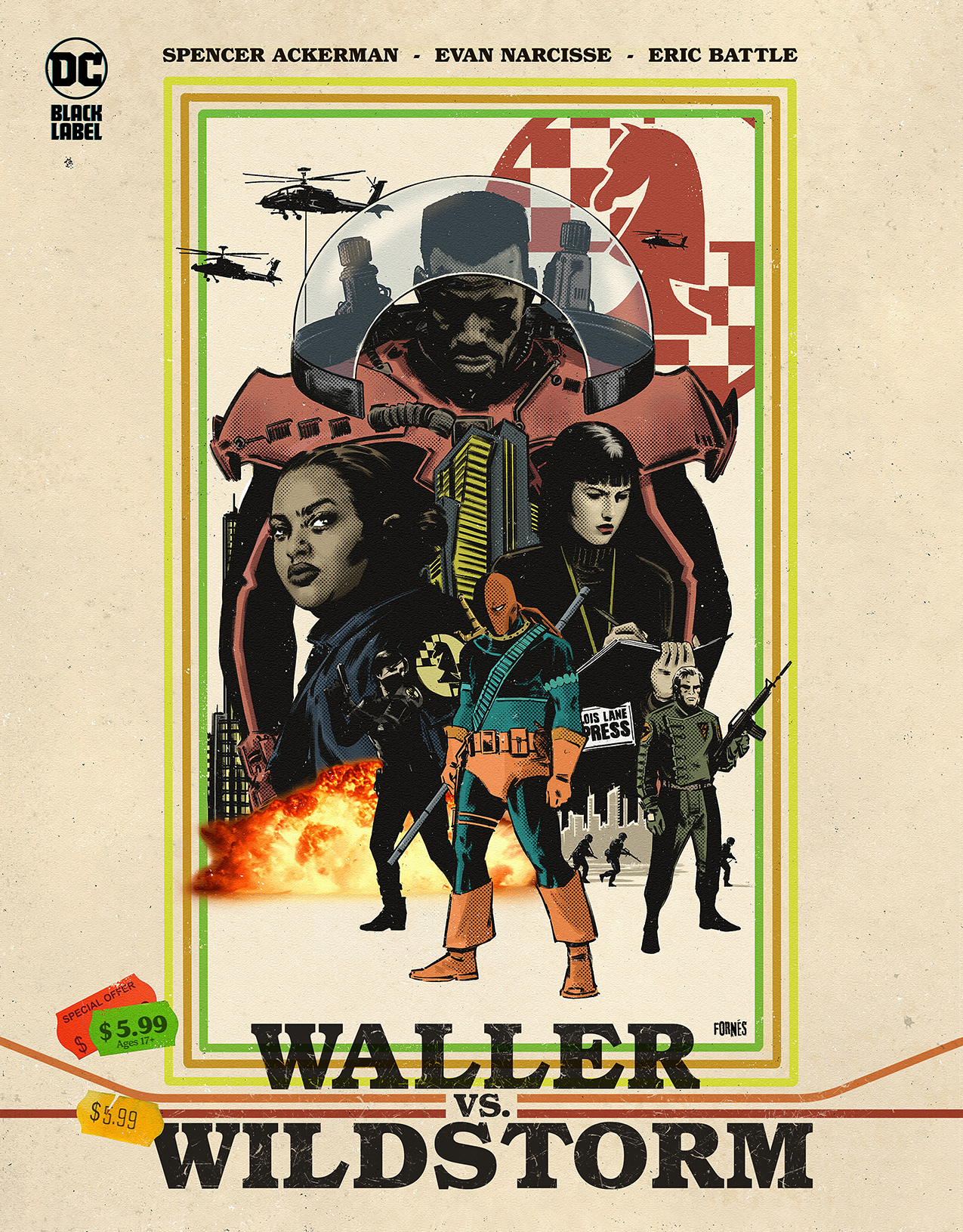 In 1992 Jim Lee changed the course of comics history with the founding of WildStorm Productions, which would revolutionize the business and launch the careers of so many top creators. 30 years later the impact of the imprint, character and creators is felt to this day! In honor of this legacy comes a 100 page giant that pays homage to the past…and looks toward the future! Part of this mammoth special will be reprinting–for the first time in periodical form!– short stories from the acclaimed WildStorm: A Celebration of 25 Years hardcover, including stories by Jim Lee, J. Scott Campbell, Brett Booth, Dustin Nguyen and more…and also included will be new stories featuring WildStorm characters in the DC Core line, charting their future in the DC Universe. 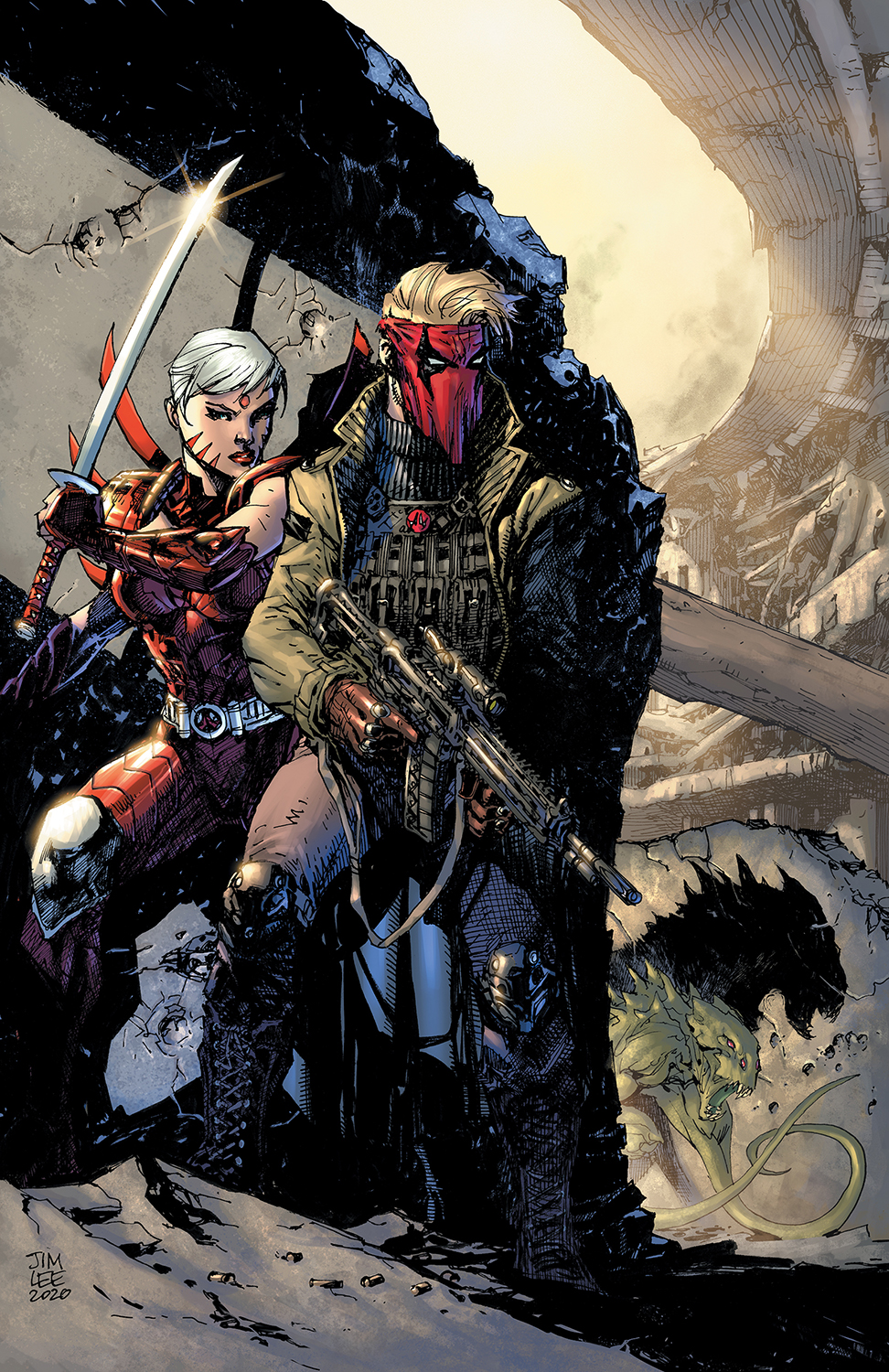 1:25 Glow in the Dark cover by JEFF SPOKES

This November, DC will feature over 15 ’90s themed variant covers across its line of comics, including five fully embossed covers (marked in bold), from some of the top cover artists.

Here are some example’s of the DC 90’s variant covers. 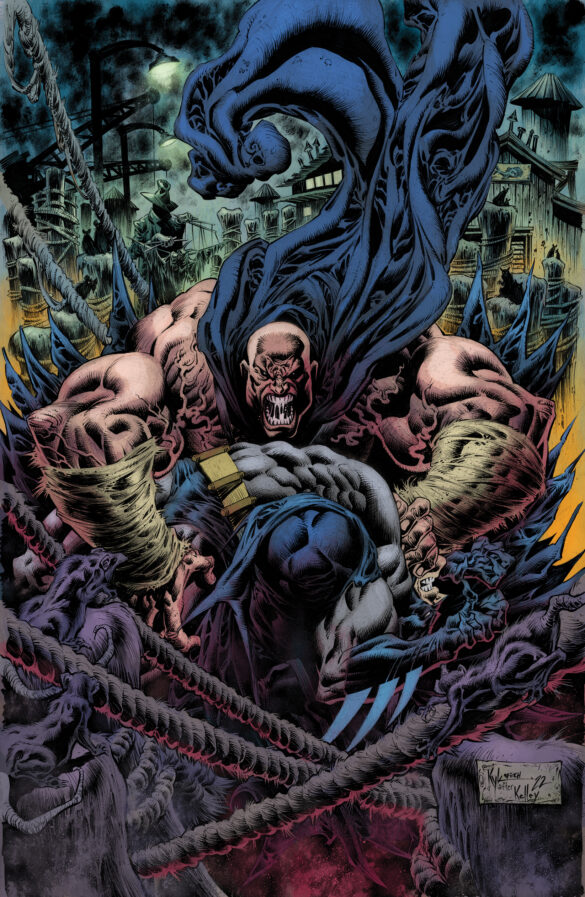 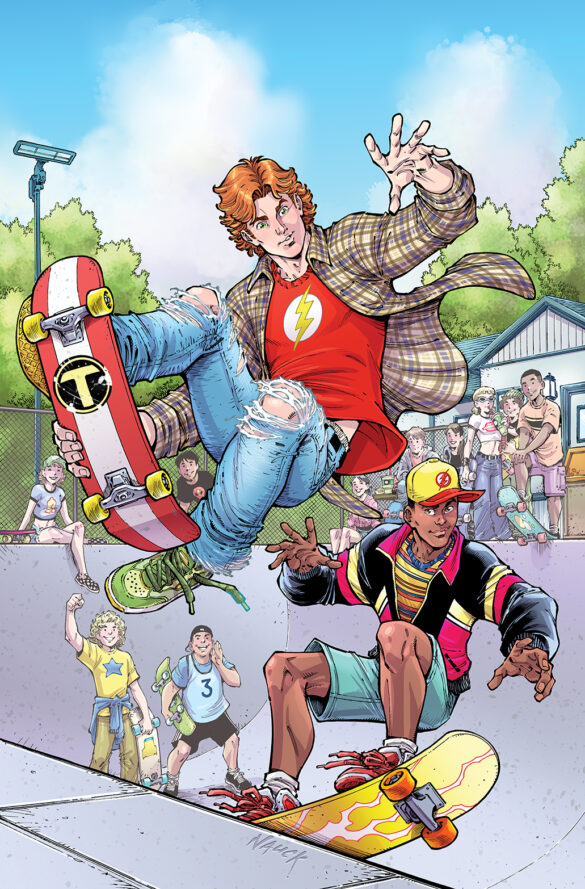 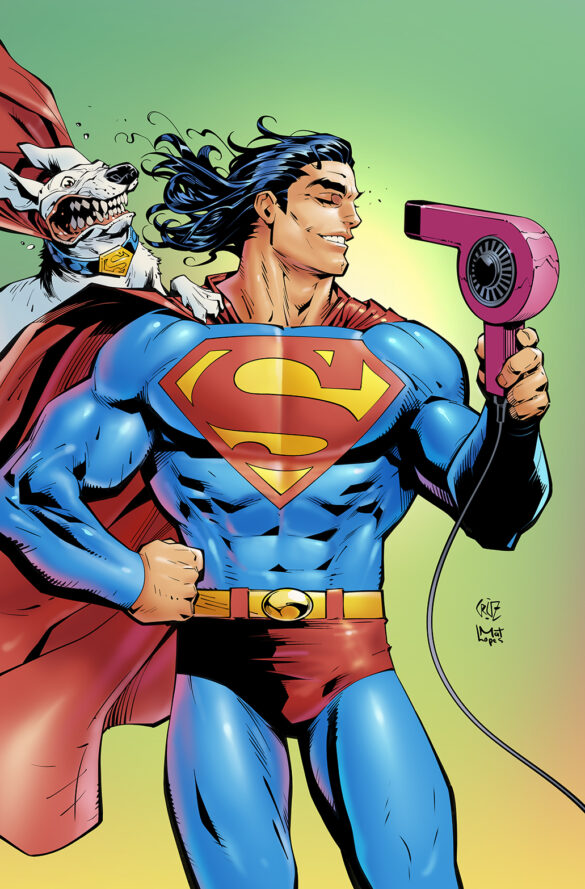 The fully embossed covers have an FOC date of September 18.

Originally announced at the buzzed about “Jim Lee and Friends” panel at San Diego Comic-Con, DC will be reprinting both Batman/Spawn: War Devil#1 by legendary Batman writers and artists Doug Moench, Chuck Dixon, Alan Grant, and Klaus Janson and Spawn/Batman from Frank Miller and Todd McFarlane in one complete collection, Batman/Spawn: The Classic Collection. Fans won’t want to miss this collection, in print for the first time in years, when it is available at comic book stores on November 15, ahead of the release of the highly anticipated Batman/Spawn from Todd McFarlane and Greg Capullo on December 16.

An ancient evil has arisen in Gotham City. The last time it appeared, an entire colony was wiped clean from the face of the Earth, leaving only one clue: Croatoan. Whoever or whatever Croatoan is, it’ll take all of the Batman’s investigative skills and the supernatural abilities of an ex-soldier turned Hellspawn to save Gotham’s citizens from the hell that is about to be unleashed on our world. For the first time in three decades, this edition of the classic meeting between comics’ caped avengers of the night reprints Batman/Spawn: War Devil #1 by legendary Batman writers and artists Doug Moench, Chuck Dixon, Alan Grant, and Klaus Janson…plus the Spawn/Batman one-shot by Batman: The Dark Knight Returns writer Frank Miller and Spawn creator Todd McFarlane, which brings Batman to Spawn’s home turf of New York City! Two heroes with different methods in two very different tales. Capes will clash. 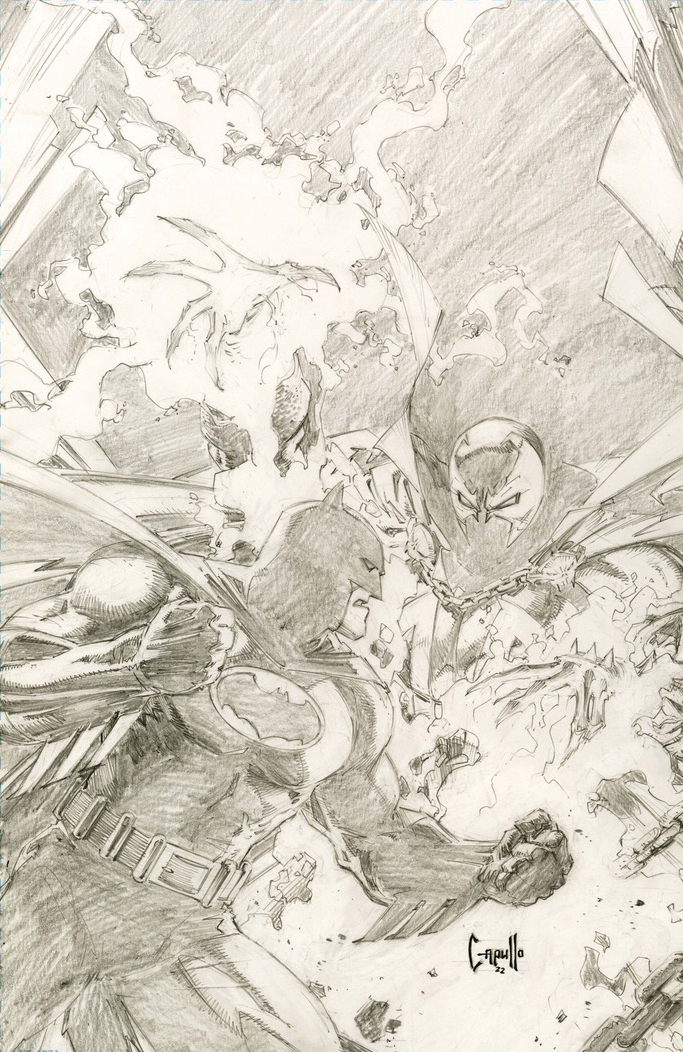 (In progress cover artwork for Batman/Spawn: The Classic Collection)

What are your favorite comics of the 90’s?  Is this the nostalgia you’re looking for?  Stick with DC Comics News for the latest on what’s coming from DC Comics.