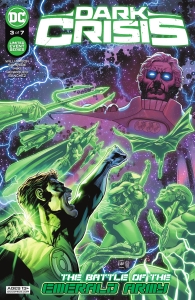 Dark Crisis #3: The battle of the Emerald Army has begun! Hal Jordan has launched all-out war on Pariah and the Dark Army to avenge his fallen Justice League teammates—but how can one man stand in the way of the Great Darkness? Meanwhile back on Earth, Titans Tower has burned and Deathstroke’s army has continued its scorched-earth march across the planet. To stop Slade Wilson, the young heroes of the DCU might have no other choice than to turn to the brutal tactics of Black Adam…

Dark Crisis #3 begins by showing us the aftermath of Deathstroke’s assault on Titans Tower. His Secret Society of Supervillains continues to hunt down heroes, causing some to run, some to lay low, and some to retire altogether. But we are also told that some still have hope as we are shown the new character Red Canary donning a mask, presumably marking the start of her career.

This appearance only shows part of her face, but the variant cover does show this mysterious new character n full costume. But nothing more is revealed about her this issue. This is a tantalizing mystery, and I can’t help but wonder how big a role she will play in the remainder of this miniseries. If not here, I’m sure we’ll be seeing plenty of her elsewhere in the DC lineup very soon.

We also see the Titans and other heroes reacting to Gar Logan’s severe injuries at the hands of Deathstroke. This seems to be hitting Nightwing especially hard, with him feeling responsible for Gar’s situation. There were some nice little nods to previous history in this section. It was nice to see Jason Todd giving support to his friend and former teammate from Red Hood and the Outlaws, Roy Harper. And Jason makes sure to pledge to help Roy locate his daughter Lian, who was recently revealed to be alive.

I also appreciated seeing that Gar received flowers from the Doom Patrol. Newer fans who only know the Doom Patrol from the TV show might not realize that Beast Boy first appeared as a member of that group in their original title. Williamson is making legacy a central theme in this series and these nods to past history demonstrate that Williamson is respecting that history in this story. 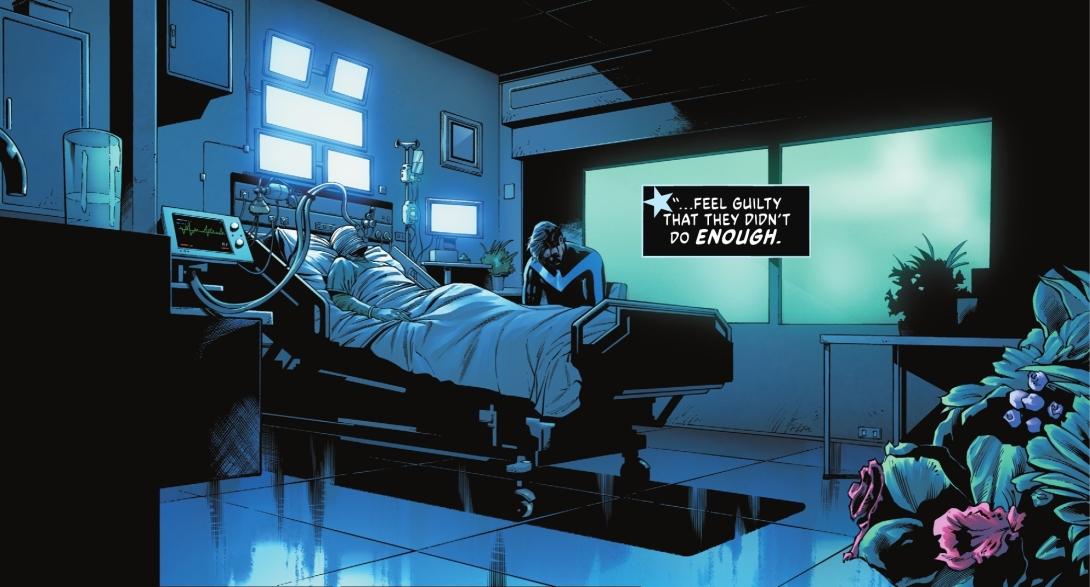 Jon Kent’s new Justice League isn’t doing so well either. Black Adam gives up on leading the team when they push back against Adam wanting to kill the villain Count Vertigo. I think the best part of this section is seeing Jon finally stand up to Black Adam. Jon has been somewhat unsure of stepping into his father’s shoes, which led him to letting Black Adam step in and take over.

But when Adam wants to cross this line that’s sacred to both Superman and Batman, Jon is having none of it. Adam sneeringly states, “I did not ask your permission, boy”. And Jon gets right in his face, his eyes literally blazing, and simply says “Stop”. And Adam is actually taken aback by this, even if only momentarily. This leads to Adam quitting the team and going off to find another team more aligned with his way of thinking. The issue’s ending sees Adam’s encounter with that team.

Wonder Girl Yara Flor shows up to join the League, having changed her mind after refusing Jon’s earlier invitation. I wonder if the new Batman, Jace Fox will have a similar change of heart. But there may not be a team left for Yara to join, as Robin quits, and several other members don’t outright quit, but head off to take care of other business.

But even if there is no Justice League, we do see the return of their predecessors, the Justice Society. The makeup of the Society as shown here doesn’t have any surprises. Any new faces will presumably show up when Geoff Johns’ Justice Society series debuts later this year. One notable absence is Jay Garrick, but he is busy with the rest of the Flash-Family searching for Barry Allen in the pages of The Flash.

We also see that Deathstroke is now fully under control of the Great Darkness. But the Darkness has only been controlling the Secret Society indirectly through Deathstroke up to now. But now the Darkness takes that direct control. Presumably this will amp up their power levels considerably. This is a grave concern, considering how they already currently have he upper hand over the world’s heroes. 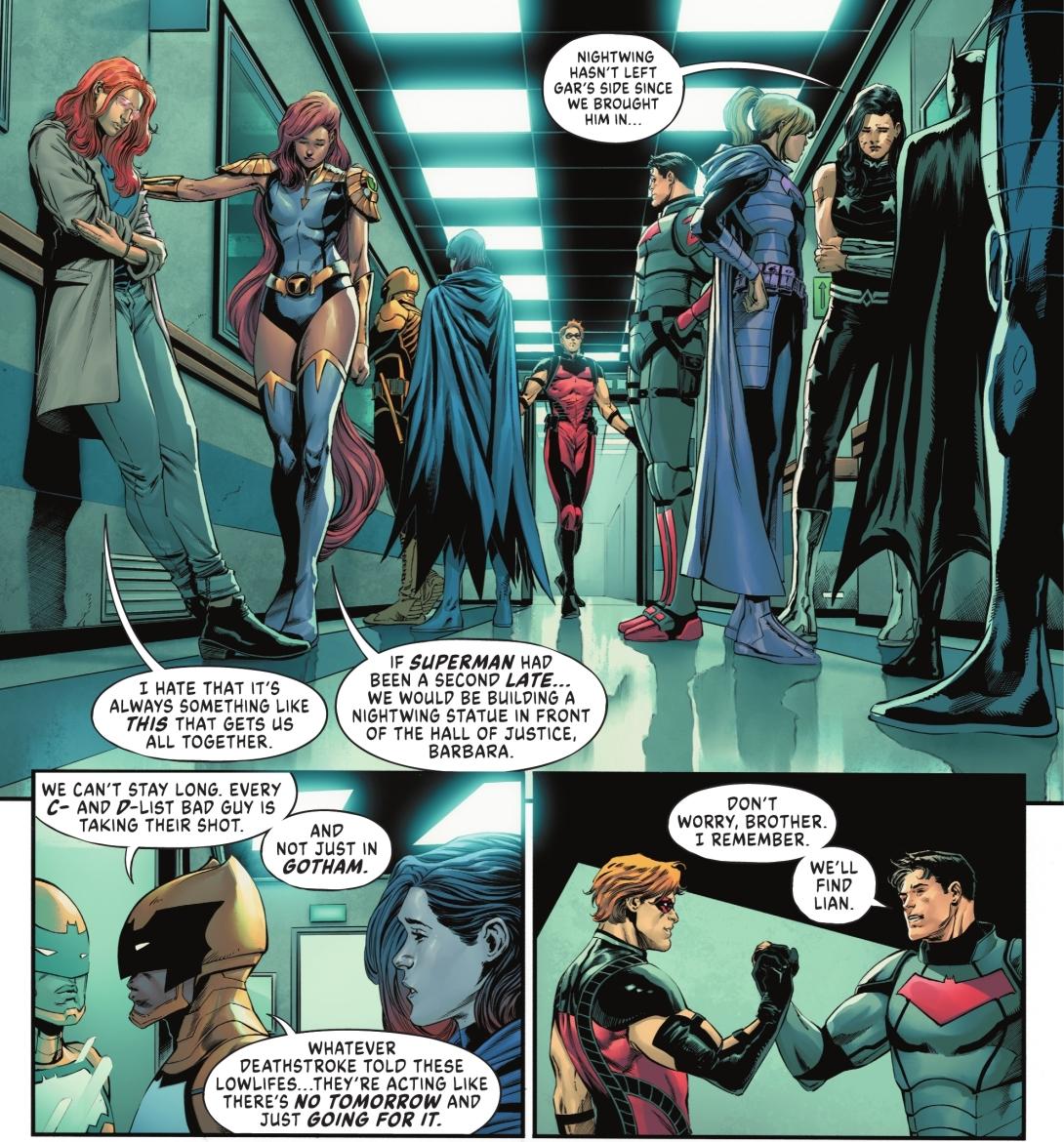 Also, I have to wonder about the lasting impact  on the characters possessed by the Great Darkness. This could leave them deadlier threats than ever once the even concludes. Also, it could leave them severely traumatized. Would that make them even more evil, or perhaps leave some feeling remorseful, and looking for a shot at redemption. I think Williamson is a bit too good of a writer to just have everyone return to their previous status quo across the board.

And given the issue’s ending, have we reached the end of Black Adam’s redemption arc. It certainly appears that he’s returning to his old villainous ways. Or is this a momentary bit of backsliding before he reaffirms his intention to redeem himself. I suspect the latter. I don’t think DC will allow his re-establishmnt as a villain with the Black Adam movie imminent.

We also see Hal Jordan leading a contingent of Green Lanterns  in a direct confrontation with Pariah. There is a bit of dialogue that is particularly telling. Pariah states, “Soon a new Crisis will pull me and my Dark Army to your world, where I can use the rest of the heroes there to restore what was lost. The Great Darkness would rather all this go away. A return to nothing. But I keep it’s power under my control”.

But Hal asks in response, “You sure it’s not controlling you, hotshot?”. There’s the question. It’s looking like the Great Darkness calls the shots rather than Pariah. However, I suspect that Pariah will manage to achieve his goals to some degree by the end of the story. After all, it’s a pretty safe bet that the Great Darkness will fail to achieve complete and total nothingness.

I have no complaints beyond having to wait an entire month to see what’s coming next. But at least there are the tie-in specials and Flashpoint Beyond to tide me over until then.

Williamson is doing a phenomenal job of building an epic story despite the absence of several of DC’s most prominent characters. Taking the Justice League off the board is proving to be genius decision that allows for Williamson to focus on DCU’s entire legacy of fantastic characters. And the artwork by Daniel Sampere, Daniel Henriques, and Danny Miki truly adds to the epic feel of this series.