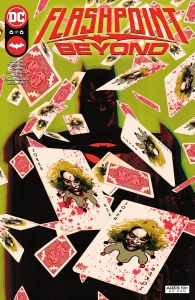 Flashpoint Beyond #6: The fate of the Flashpoint Earth hangs in the balance as Thomas must make the ultimate choice! What will happen to this fractured reality and what does it mean for the DC Universe at large?

For the previous five issues, Time Master Corky Baxter has been warning Batman about the impending arrival of Rip Hunter. Bruce Wayne has been messing about with time, and Corky has given dire predictions about what Rip will do to Bruce if he doesn’t stop. And now, in Flashpoint Beyond #6, Rip has finally arrived for a showdown with Bruce over the fate of the Flashpoint timeline.

Batman has essentially used the snow globe to capture and hold the Flashpoint timeline using Doctor Manhattan’s watch to stabilize it. Bruce’s plan is risky but doing so is the only way to keep Thomas Wayne and his timeline from fading away into nothingness.

However, the success or failure of Bruce’s plan hinges on the crucial decision Thomas makes to either accept or reject the reality he lives in. The Flashpoint reality is already rather dystopian, but now it’s headed for a Kryptonian invasion of Earth. And now that world’s Joker, Martha Wayne offers Thomas exactly what he needs to achieve his ultimate goal in this series: a time machine to go back and set things right by making sure it’s Bruce that survives that night in Crime Alley. 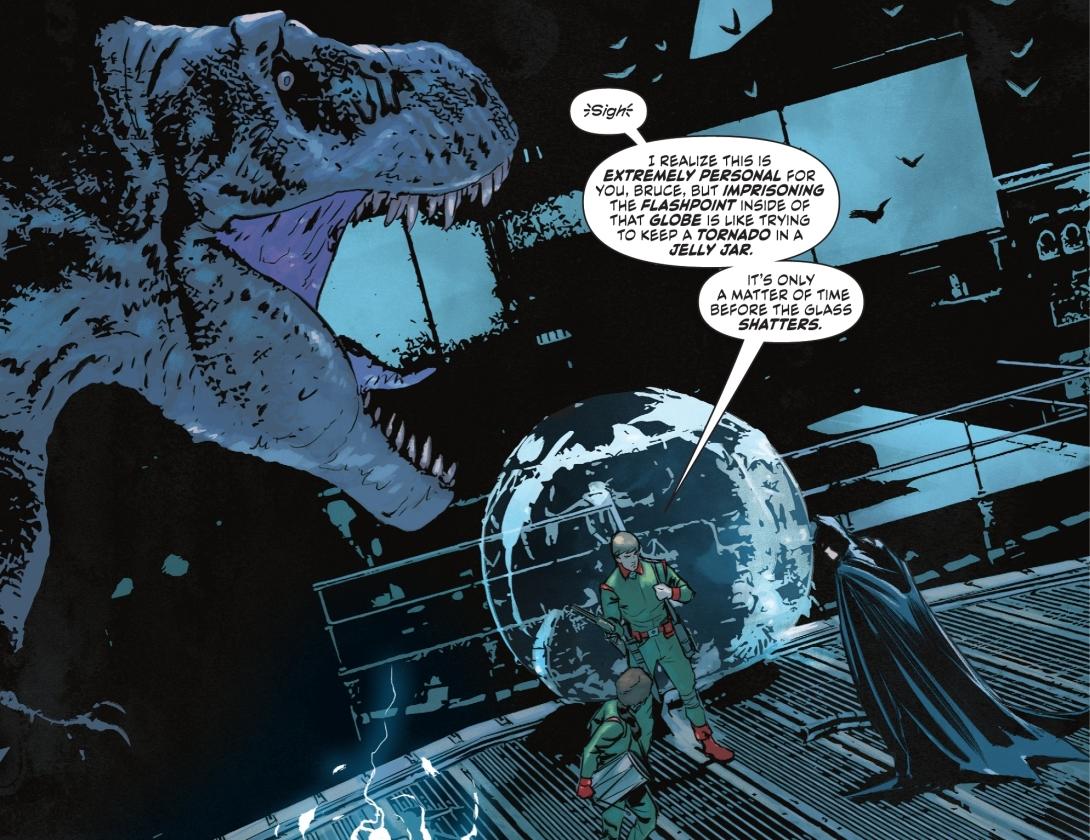 However, Thomas makes the decision that Bruce knows he ultimately will. As Bruce states, it was all in the letter Thomas wrote for Barry to give to Bruce:

Having read that, Bruce knew that Thomas would eventually come to terms with the life he has and try to rebuild from there rather than try to change the past. And that’s what Thomas does. Thus, he gives up on trying to save Bruce and focuses on rebuilding his family and saving lives in his own world. Thomas has finally rejected his assertion that “nothing matters”, having decided that the Flashpoint timeline does matter.

I did find it amusing that Bruce comment on Rip Hunter:

He’s the most arrogant man I’ve ever met in my life and considering I know Lex Luthor and Hal Jordan, that’s saying something.

There are probably more than a few heroes and villains in the DCU that would classify Bruce as the most arrogant man in the universe. Both are rather justified in their arrogance. Rip is arrogant as he knows everyone’s past, present, and future. He’s armed with knowledge beyond what most characters in the DCU have access to. And Bruce is the Batman. He’s regularly touted as one of the two smartest men in the world, and he knows it. And when the two clash, it’s not surprising that Bruce comes out as the winner.

However, it seems that Bruce isn’t going to get off entirely unscathed, as the Time Masters discuss how to punish Bruce for his actions. Corky is all for altering Bruce’s origin story. But Rip decides instead to not warn Bruce about upcoming problems with “his mother’s family”, hinting at trouble in Bruce’s near future. Is Rip referring to Batwoman Kate Kane and her father Jacob Kane? Or will some other Kanes show up to cause trouble? 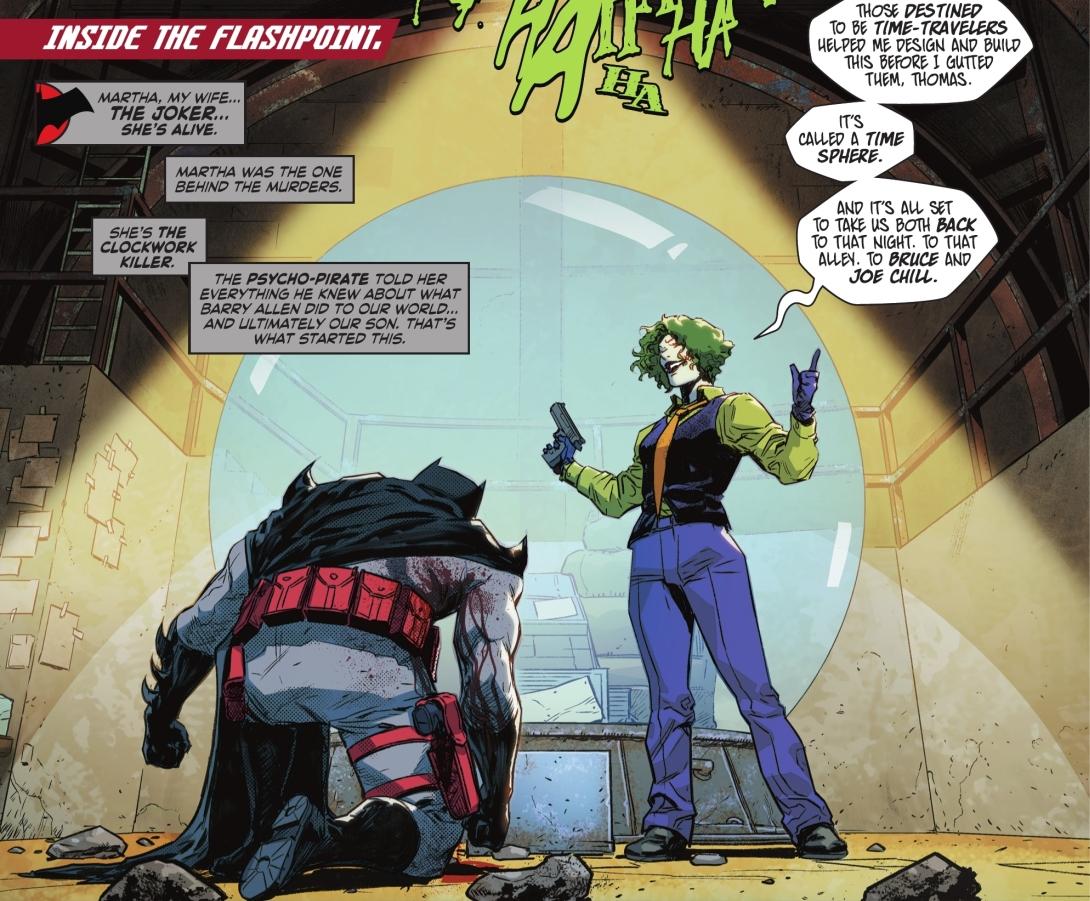 There is also a mention of “the Thirteen”, which refers to a handful of new characters that Rip hopes will “reintegrate back into the 1940s without incident”. Clearly, Geoff Johns is laying some groundwork for his upcoming Justice Society title. But we have seen a brief mention of Judy Garrick before. In The Flash #786, Jay seems to have a moment of déjà vu having a fleeting recognition of someone called “Judy”. I wonder if Judy will prove to be Jay’s previously unseen daughter.

And there’s another epilogue that hints that we’re not done with the Watchmen universe, as we see Cleopatra Pak, a.k.a. Nostalgia, who was introduced in Johns’ Doomsday Clock. She states that she is trying to find someone called The Watchman. I suspect that she is referring to the mysterious boy that Manhattan bequeathed his power to at the end of that series.

I have enjoyed the device of using different artists for the different realities in this series. This gives both the main DCU timeline and the Flashpoint timeline their own distinctive feel. In this final issue, a third team steps in to handle the art for the epilogue set on the Watchmen Earth. This is especially appropriate as artist Gary Frank and colorist Brad Anderson worked on Doomsday Clock. Hopefully, they will reunite with Johns to work on the sequel being hinted at here.

I have no complaints about this issue. It neatly wraps up the story and provides a number of intriguing hints at future events. This has been a great series overall in both writing and art.

Flashpoint Beyond #6 provides a fantastic wrap-up to this series. Johns, Sheridan, and Adams have brought Thomas Wayne’s story to a satisfying conclusion – for now, anyway. Future explorations of the Flashpoint timeline would still be welcome. And several intriguing hints were dropped in this final issue that should provide all three writers fodder for future stories. This was a somewhat offbeat premise for a story but turned out to be a real treat.