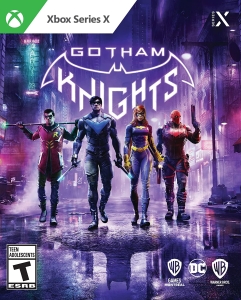 Thanks go to Warner Bros. Games for providing a free copy of Gotham Knights Deluxe Edition.

Gotham Knights is a brand-new open-world, third-person action RPG featuring the Batman Family, as players step into the roles of Batgirl, Nightwing, Red Hood, and Robin, a new guard of trained DC Superheroes who must rise up as the new protectors of Gotham City in the wake of Batman’s death.

During the week leading up to its release, Gotham Knights has become a rather divisive game. Details about the game’s specs came to light that did not meet the expectations of many players. Thus, gamers have been divided into those for whom these drawbacks are a minor consideration and those who feel they are unforgivable. And gamers seem split over whether the game is terrific or merely mediocre.

I fall into the former group. I found the game to be addictive, and fun, and I’ve loved nearly every moment of gameplay. There is much to love about this game, and after a week of playing, I am still discovering more things to love about it.

First, I would like to state that I find the basic concept of the game to be a rather daring risk. I would think that just making a Batman game would be almost assured to be a financial success. But WB Montreal made the risky move of making a Batman game without Batman himself, and instead focusing on his former sidekicks. In doing so, they have at least attempted to do something new by shifting the focus onto Batman’s supporting cast.

You are able to freely switch between all four characters, each of whom has their own particular playstyle. Nightwing has a very acrobatic style. Robin focuses on stealth and tech. Red Hood is a brick who uses non-lethal guns and some mystical abilities derived from his exposure to a Lazarus Pit. And Barbara is the most Batman-like in fighting style.

As a mediocre gamer, I love it when a game doesn’t punish you for choosing an easier mode. Choosing a lower difficulty setting does not lock you off from earning any achievements or trophies, or from any sections of the game. For even the most lackluster players, choosing the “Very Easy” difficulty option will let you feel like an invincible superhero. But for hardcore gamers who want a challenge, there are more punishing difficulty settings as well.

This isn’t quite the same DCU that we’re familiar with from the comics. The most notable difference is the absence of Damian Wayne from this world’s history. However, there are tons of references that make it clear that much of the DCU exists beyond Gotham. You receive e-mails from Superman, Wonder Woman, Black Canary, Conner Kent, and others. And there are many references in the game world itself. For example, the Monarch Theatre features Brother Power the Geek on the marquee. And watchful players can spot posters for performances by Zatara and Mucous Membrane inside. 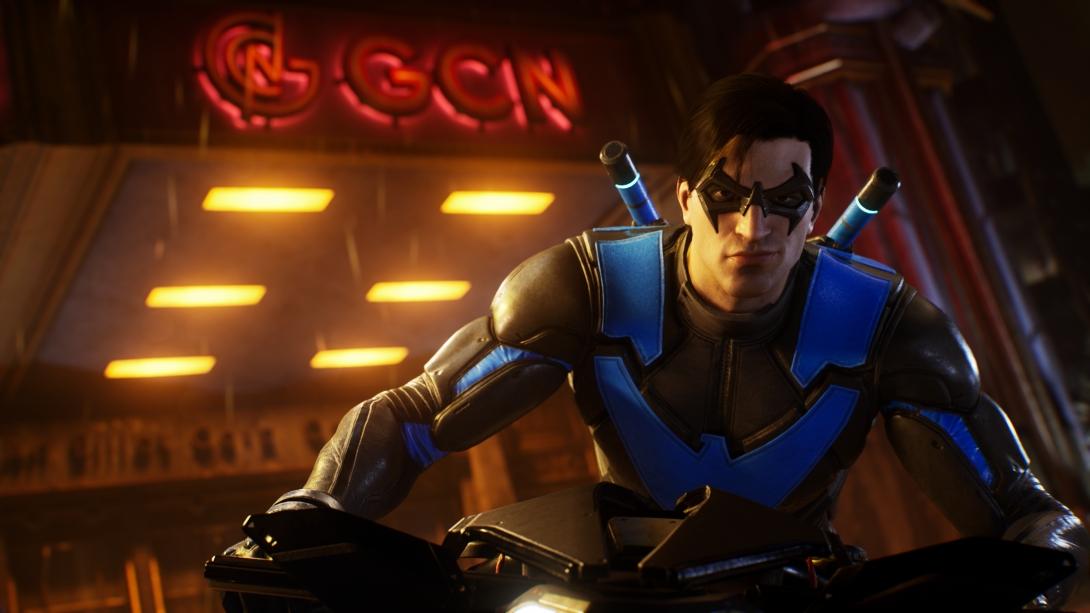 One reference that I absolutely loved was in the naming of one of Gotham’s boroughs. Luthor’s henchman Otis from Superman: The Movie has finally gotten his wish to have a town named Otisburg in his honor.

And as a nice added touch, there are tributes to Batman creators in landmarks and street names. There are also memorial plaques dedicated to creators that have recently passed. I’ve found one for Neal Adam and another for George Perez. And I’m keeping my eyes out to see if they included ones for Denny O’Neil, John Paul Leon, or others that we’ve recently lost.

I also like that the game is fully playable alone. Gotham Knights doesn’t force you to partner up to complete certain objectives. However, if you enjoy multiplayer, you can drop in and out of other players’ games to help them out or send out an SOS when you need help. Or you can play together with a friend. Personally, I prefer the single-player experience, so I appreciate that I am not limited in any way by the multiplayer features.

The major issue that some have taken exception to is that the game only contains one graphics mode, 4K in 30 frames per second. Many new games available on the current console generation also offer a “performance mode” that lowers the resolution but increases the framerate to 60 FPS. They feel that a 60 FPS mode is now a standard for this generation’s games. To compound this, WB only revealed this in the week before release. This left some upset about preordering the game under the assumption that it would have a performance mode.

Personally, I had little difficulty playing the game at 30 FPS. On the other hand, I’ve only had my Xbox Series X for about a month, so I haven’t had much time to become accustomed to 60 FPS yet. But on the whole, the lack of performance mode is not a major drawback for me.

There is also the complaint that WB initially planned to support the previous generation of consoles (Xbox One and PlayStation 4) but then decided to focus on the new generation consoles instead. I can’t say that I blame WB for making this decision. At some point, new games are going to stop supporting the older generation – especially now that consumers are actually able to get the newer consoles.

However, I can also empathize with those still stuck with the previous generation of consoles. If I hadn’t been able to finally get my hands on a Series X, I would definitely be bitter that I was missing out on this game. 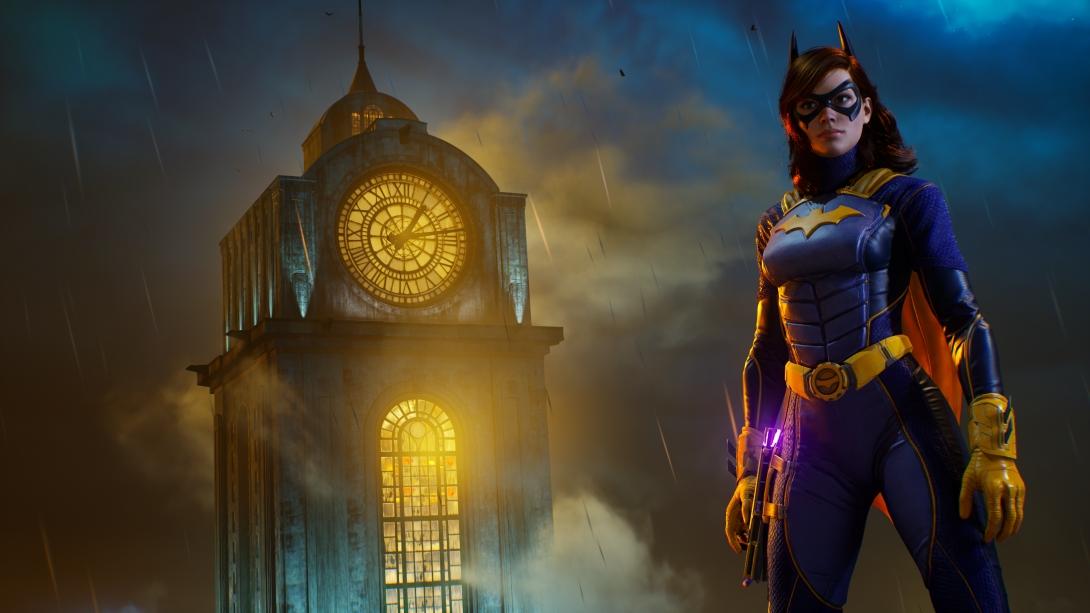 On the whole, I didn’t encounter much in the line of graphical glitches or bugs myself, with a couple of exceptions. I did notice that the framerate sometimes drops when riding the Batcycle around town. I found this a bit distracting, but not problematic. It didn’t cause any lasting harm or add any difficulty to the gameplay.

The other was a bit more problematic, as it causes a mission to be failed. There is one type of side mission called “Criminal Stronghold”, where you have to defeat all the criminals in the hideout and rescue a few hostages. However, when this mission takes place in the city’s Planetarium, I found that one of the criminals is non-responsive, and unfortunately completely invincible. But you cannot complete the mission without defeating him, so your own option is to abandon and therefore fail the mission.

Fortunately, that failure has no lasting repercussions outside of the mission itself. And it’s well worth attempting, as you get XP (experience points) for defeating the other enemies, as well as giving access to three chests full of crafting resources. You just don’t get the final reward of XP and resources for completing the mission. 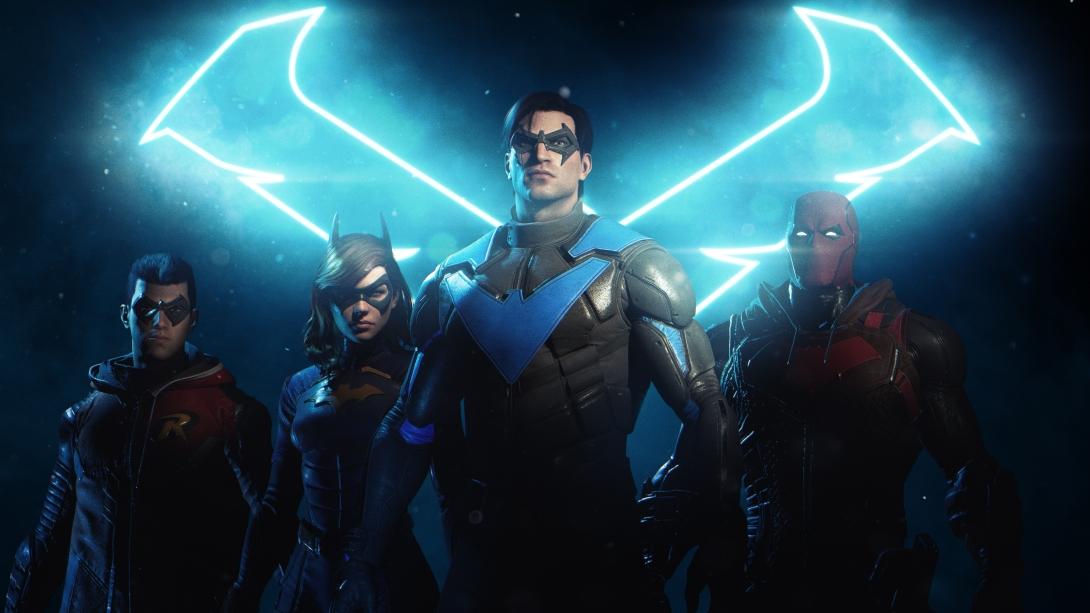 I also have heard a few complaints about the design of Gotham itself. Some players dislike that Gotham City is not the dark gothic city that appears in recent comics, movies, and video games. Instead, it’s a Gotham that looks like most modern cities with a mix of older buildings and several newer towers of glass and steel.

While gothic Gotham has been more common in recent years, I feel that a more modern Gotham is still a valid artistic choice. This game very much evokes the Gotham City in the comics of the 70s that I grew up reading. There were the shinier, newer buildings in the richer parts of the city, but also the older, crumbling buildings in the rougher parts of town – as well as buffer areas with a mix of both. Sure, it’s not quite the Gotham City in most current media, but it’s not an unprecedented interpretation either.

Gotham Knights is an absolutely fantastic experience with addicting gameplay. I have enjoyed nearly every moment of gameplay so far. I have enjoyed it so much that it will be one of the few games that have inspired me to launch an immediate second playthrough. While Gotham Knights does have a few rough edges, I suspect that they will be addressed in game patches before too long.