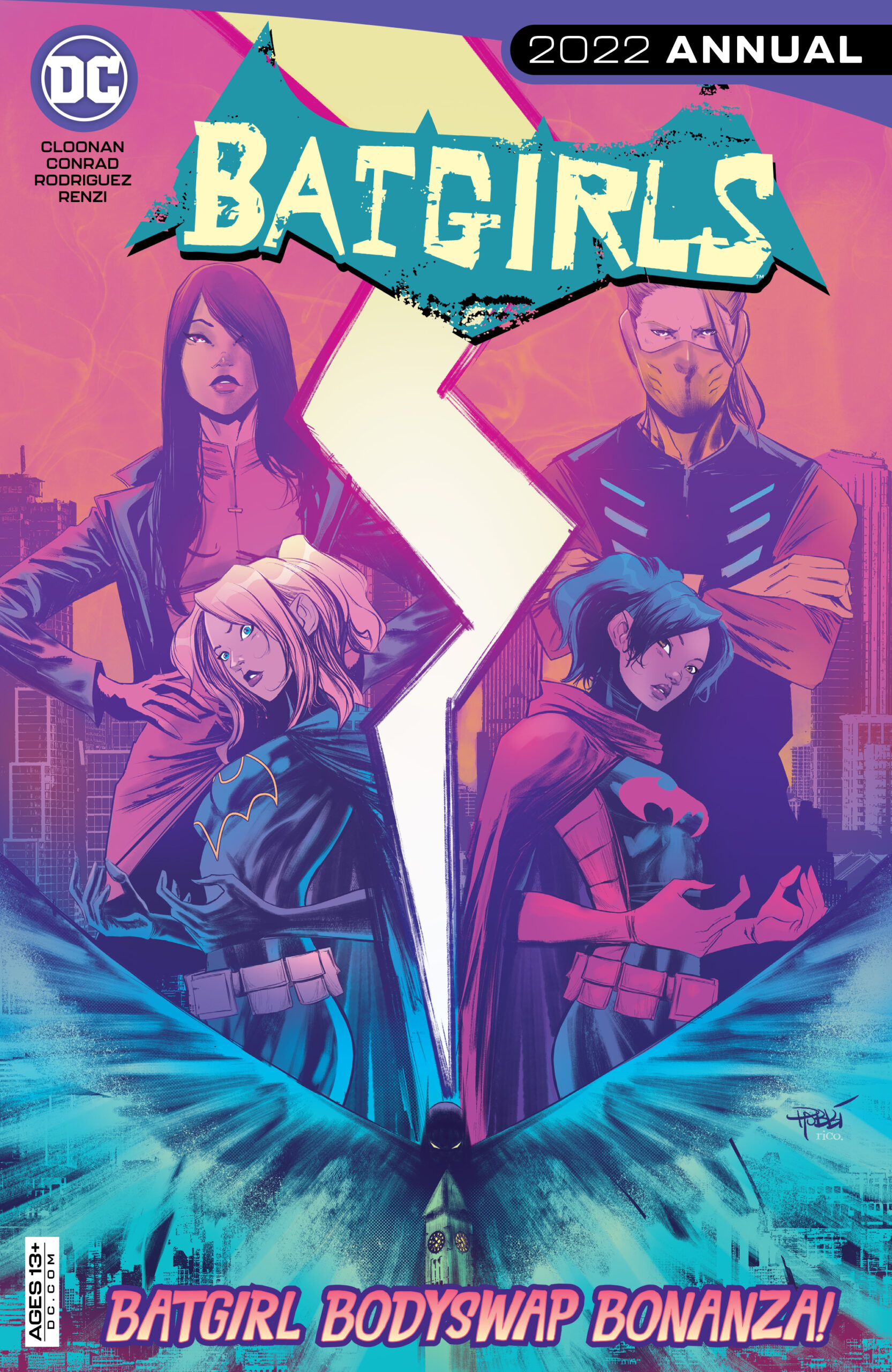 Steph and Cass are ready for a break, trying to take it easy after catching “The Hill Ripper.”  But, things don’t always go as planned for the Batgirls!  Once they get involved in a case being kept secret by the Gotham PD, things go sideways for them!

What do you do with an Annual in 2022?  Back in the Silver Age, you’d get a giant-sized issue reprinting older tales like Superman Annual #1.  Beginning with the Bronze Age, you might get an event crossover or a special tale.  While the Batgirls 2022 Annual is a special issue, it’s really just a double-length start to the next arc.  Like the entire series, Becky Cloonan and Michael W. Conrad keep the story focused on the characters, especially Cass and Steph.  Hopefully, you’re reading for the characters and the character development and not simply tied to the flash bang of an adventure.  The characters ground the story and the world-building.  Cloonan and Conrad hit on that as well, as we see something new in the Cass-Steph-Babs dynamic.  Ultimately, it leads to something that will pay off by the end of this arc. 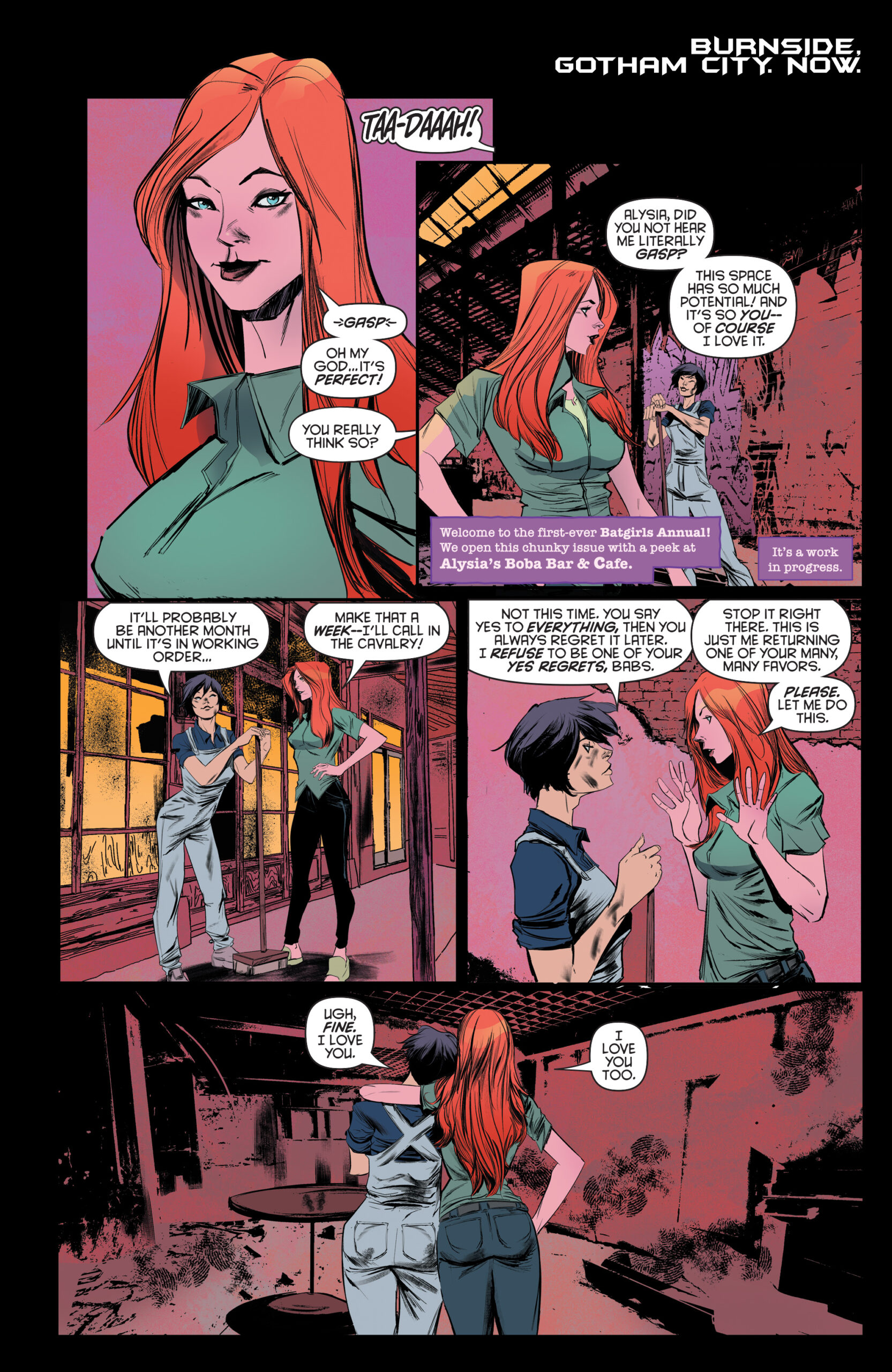 Specifically, Steph and Cass look at their friendship and its importance and how they can continue to build it.  It isn’t as contrived as it sounds.  Steph and Cass are looking at their lives as Batgirls and how to have a more complete experience.  They must have a stronger connection if they expect to be able to live any ‘normal’ life.  Ultimately, they have to share more about themselves, but…they aren’t quite ready.  The story wonderfully weaves this theme into the action.  It’s not fair to spoil the two surprise appearances that will clearly be a large part of this new story arc, but these are connected to Steph and Cass in a way that incorporates the relationship they are building beyond the fact that they are both Batgirls. 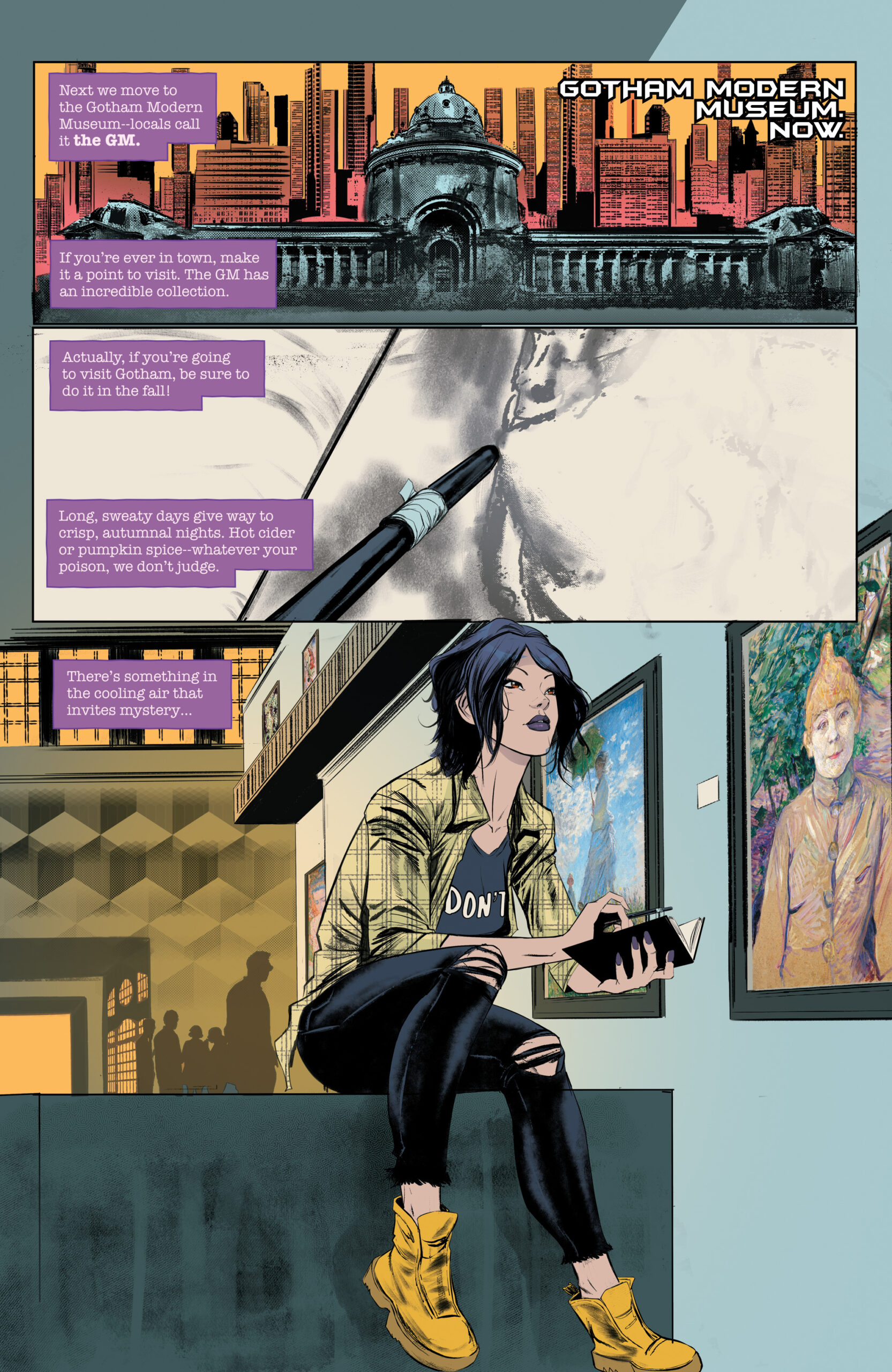 Barbara and Bruce (Batman) have an interaction in this issue that builds on the theme of relationships.  It’s not a long sequence, but it does touch on some interesting aspects of their friendship/ working relationship.  It suggests some bigger questions about how people, in general, relate to one another.  Perhaps, one will see him/herself in one of these characters.  Furthermore, the interactions between Babs and Alyssa in the Batgirls 2022 Annual give some insight into how they relate, and how Babs interacts with others in general.  There are a lot of deep character beats throughout that really shine due to the expanded length of this issue.  Additionally, they are part of the fabric of the issue as the relationship’s explored as a theme with all the characters.  It’s extremely effective! 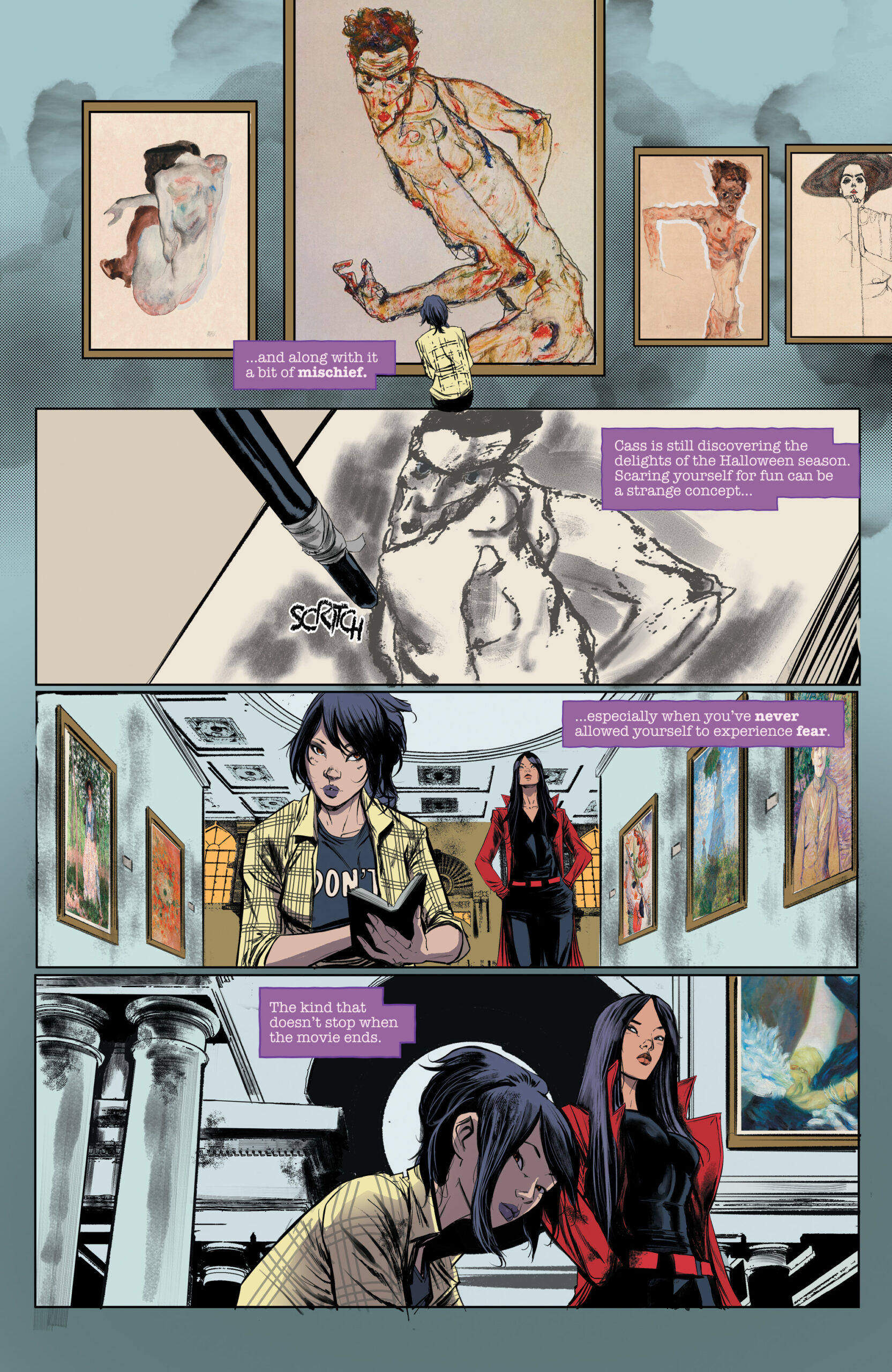 Robbi Rodriguez and Rico Renzi handle the art on this book, and the color palette is consistent with the look of the title since the beginning of the series.  The purples and blues create a place that is unique to the Batgirls and makes it stand out from the rest of Gotham City.  Rodriguez tells a lot of this story with body language, facial expressions, and a sense of subtlety.  It’s done very well and quite cinematic in approach.  It’s worth slowing down when reading to catch it all.

Well, it wouldn’t be a Batgirls review if I didn’t mention how hard it is to find negatives!!! 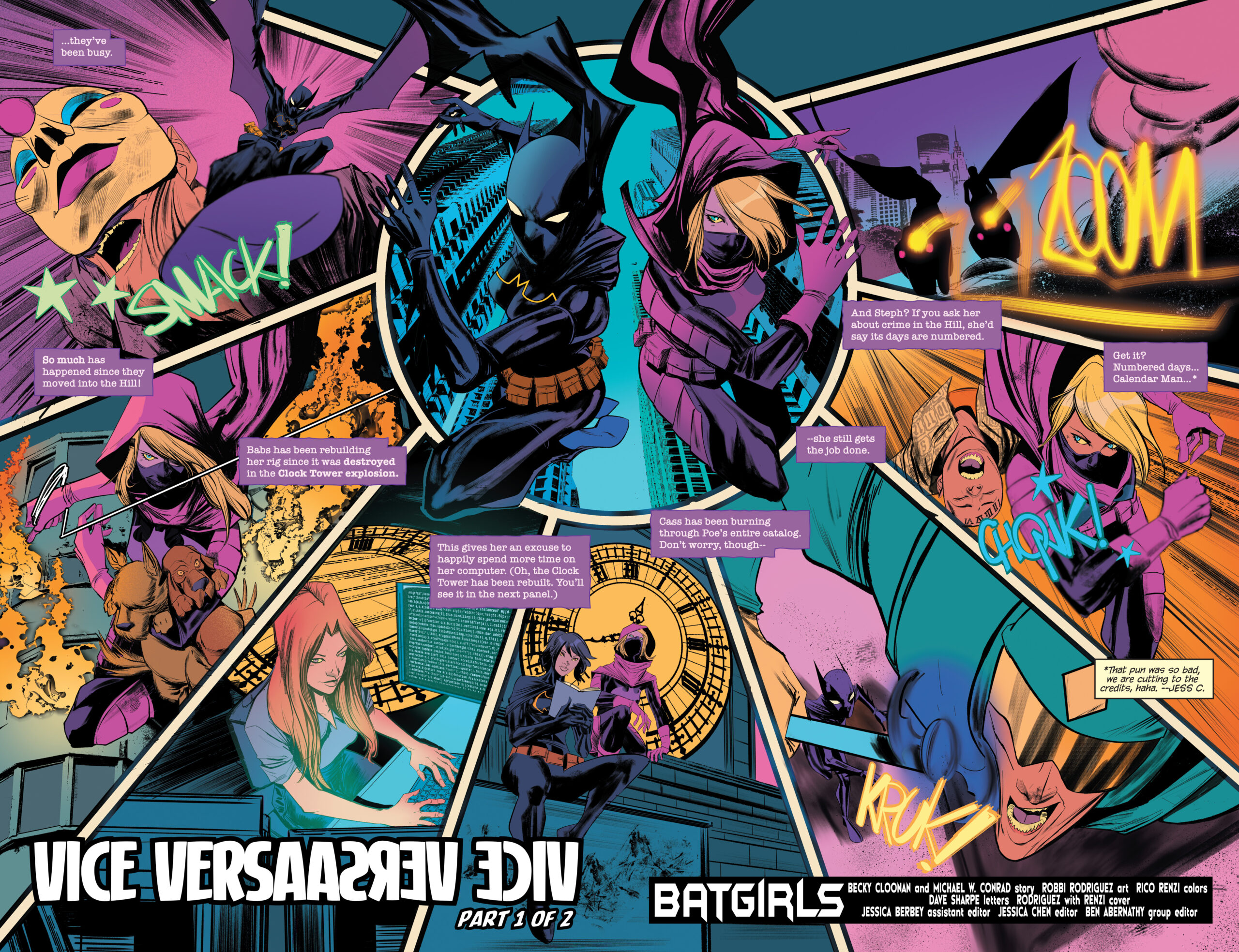 The Batgirls 2022 Annual is for the sensitive reader.  When I say that I mean it is for a reader who is able to connect with the characters and relationships.  This isn’t a loud blockbuster, but it’s not without an interesting and exciting plot.  However, the attention to character and relationships is what elevates this, although the twists in the setup and plot are really cool as well!  More comics should be like Batgirls.  Even if you weren’t a fan of Steph and Cass when the series started, it’s hard to imagine how you can’t be now after just over a year of the series.

DC Universe Infinite Expands Their Ultra-Tier With Over 32,000 Comics