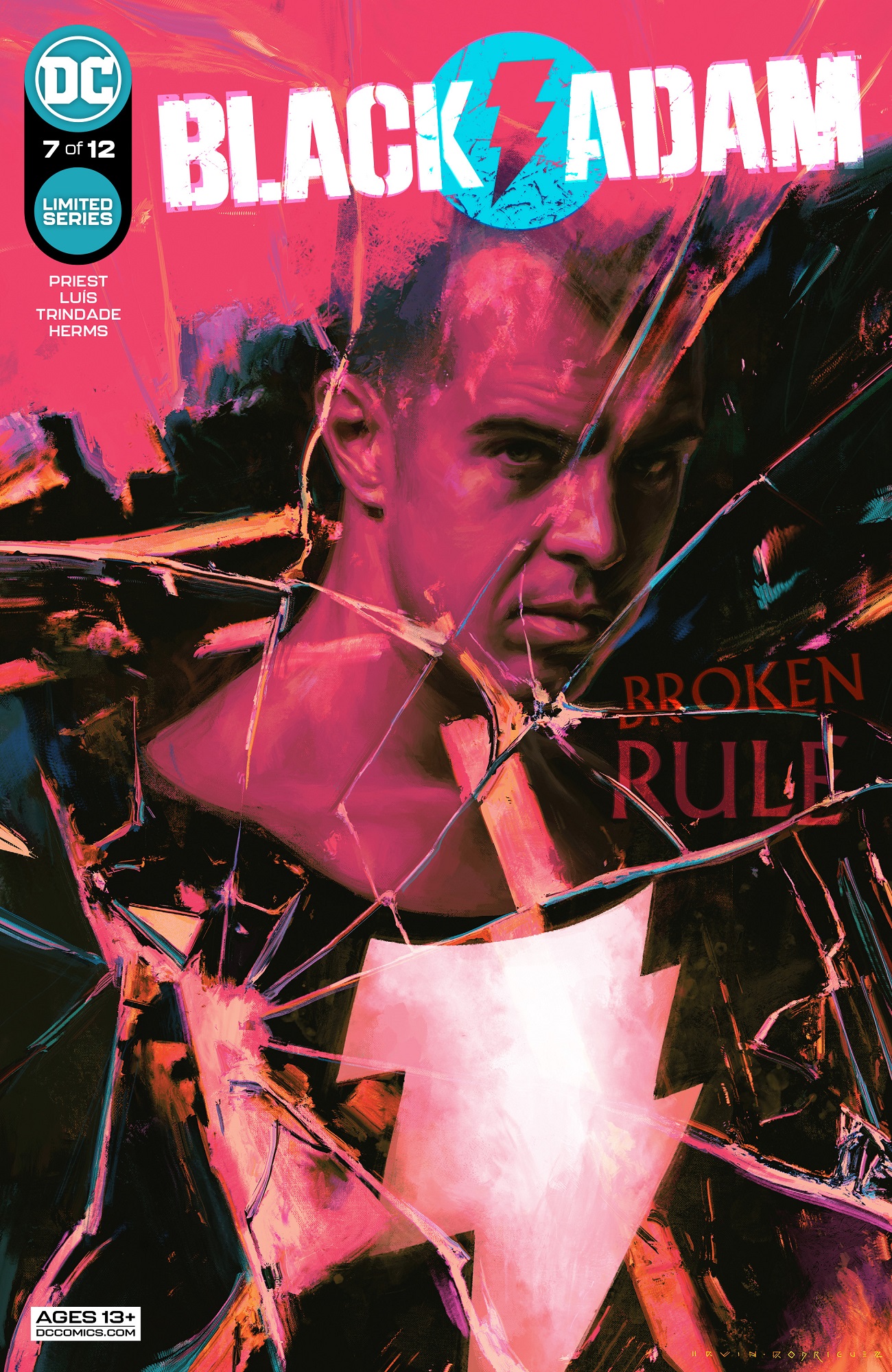 Malik takes center stage in this week’s Black Adam #7, as the young hero searches for Teth Adam before it’s too late

Confronted by Sargon, Malik (a distant, modern-day relation to Black Adam) finds himself in a world of trouble. Sargon, a powerful sorcerer, is in search of the ring that Adam gave to Malik, but it appears that Malik’s sister has pawned it for cash. However, this is only one of the newly minted hero’s problems. Like Adam, he too has been infected by the same cosmic virus that sent him to Malik’s hospital. Accordingly, Malik’s hands have started to rot.

After Sargon departs in search of the missing ring, Malik transforms into his alter ego in order to search for Black Adam. While initially dubbed “White Adam”, the black medical student took offense to the name. Since his christening, he has been searching for a new superhero alias. After considering a few options, he lands on the name Bolt (which may or may not stick at this point).

Unbeknownst to Malik, Adam is preoccupied with the events of the Dark Crisis on Infinite Earths. Nevertheless, he does manage to find the VR machine that Adam used last issue. Out of curiosity, Malik puts on the headset and is immediately transported to a VR reality where he meets a child version of Teth Adam. However, when this version of the character transforms, his costume is white like Malik’s.

When he takes off the headset, Malik realizes that the room he’s in is a trap that uses Mirror Master’s technology to seal the room. He also finds Mirror Master stuck in one of the room’s mirrors. After he helps the villain escape the mirror dimension, the two have to figure out how to now escape their sealed prison.

One of the best aspects of Black Adam #7 is its focus on Malik. Priest introduced Malik at the beginning of the series but hasn’t given the character much screen time. Yet, in spite of the series’ title, Black Adam plays a minimal role in this issue. Seriously, he shows up in two panels leaving Malik to take center stage within the narrative. Watching a new hero cut his teeth is always fun, but there’s something special about this story. Priest’s narrative has a unique aspect to this well-trodden trope, as Malik’s powers are derived from a notorious supervillain. Malik bumbles blindly from one sense to the next oblivious to the gravity of his situation. He comes across as vibrant and charming.

Also, for the first time, it feels like Black Adam is actually a part of the DCU. Both this month’s issue and the previous one have done a lot to reconcile the Black Adam in both Dark Crisis and Justice League with Priest’s take on the character. And while the two incarnations of the character still feel disjointed, it’s nice to know that Priest has made the effort to incorporate his work into the larger DC continuity.

These nods to continuity also give me hope that Malik might actually stick around. Black Adam was initially an ongoing series but is now a 12-issue limited series. Often plotlines and characters from limited series are discarded, but Priest’s inclusion of continuity plot points speaks to a larger ambition. It’s clear he wants this story to be relevant after the series ends.

One of the more frustrating aspects of Priest’s writing is that his stories are often hard to read in a serialized format. His plotlines are often complex, mired in philosophical, theological, and psychological themes. This coupled with his proclivity for dense subplots makes for a disjointed reading experience month-to-month. For example, issue five focused on Black Adam dealing with Mesopotamian gods, issue six pivoted to a VR battle with Batman, and this month’s issue completely changes gears to focus on Malik.

At best, these plotlines seem loosely connected. Mostly though, the series feels choppy, lacking cohesion. The problem is that I cannot tell whether this is a problem with the story or the format. It could be that the time between issues is causing the problem; potentially, Black Adam could read perfectly fine in a long-form, graphic novel format. On the other hand, Priest could be overly ambitious, exploring these subplots and deep themes at the expense of reader accessibility. Ultimately, I’d have to read the collected edition to determine one way or another.

Despite its oblique nature, this series has nonetheless been compelling. Black Adam #7 focuses on one of the most compelling aspects of the story so far: Malik. Great characterization can cover a multitude of “writing sins”, and Malik is genuinely fun to read. As for the art, the series did introduce a new penciling team: Jose Luis and Jonas Trindade have taken over from Eddy Barrows. While normally I would find this transition frustrating, I didn’t notice the shift until I read the credits eight pages into the issue.

Overall, this issue is fun, but the series I can imagine is an acquired taste. Not everyone is going to enjoy its complexity