Masters of the Universe : The Origin of Hordak One Shot Review

What? A He-Man book, on a DC page? Yes! Follow the jump to find out more!

I know what you are thinking. Masters of the Universe, that is He-Man right? “I have the power!” and all that? Why in Zod’s name is this on a website dedicated to DC Comics? The answer is simple. First off, DC acquired the rights to He-Man and the Masters of the Universe a while ago, and has been publishing He-Man comics for almost a year now. Secondly, later this year there is going to be a DCU vs Masters of the Universe crossover. Although it is out of continuity, this tale still places the He-Man Universe firmly in the DC Multiverse!

It started with a miniseries, and occasional digital comics that gave additional background info. The miniseries focused on a world in which Skeletor had made all the heroes of Eternia forget who they were and remade the world to his whims. James Robinson (Earth 2) wrote the first issue, and then Keith Giffen took over. This miniseries was brilliant, and I highly recommend the trade to all He-Man fans whenever it comes out. Upon completion of the miniseries, Giffen started a regular ongoing series that picks up where the mini left off.

This issue is a one-shot that explores the origins of the one Skeletor answers to, the main nemesis of She-Ra, The Darkseid of the He-Man world, Hordak! This story takes place “One Million Years before the birth of Adam.” A war has been waged for along time. One lone warrior, Zodak, is now all that stands to oppose the evil tyrant Hordak, who had grander, darker plans.

Giffen performs both writing and art duties for this tale, and I couldn’t be happier. His Artistic style is perfect for this sort of story. A cosmic battle between brothers that determines the fate of a Universe! The epic words that started almost every episode of He-Man are uttered by Hordak.

This might just be nitpicking, but this design of Hordak looks a little to o much like Etrigan the Demon.  When you get right down to it, we don’t really have an origin story for Hordak. He is already a tyrannical overlord of cosmic proportions at the beginning of the story. He gets more powerful by the end, however. I was excited about this origin tale, but when it is all said and done, I was disappointed that it failed to deliver a story more closely tied in with the current series. If you are looking for He-Man, you won’t find him here.

Although a decent tale with a little insight into the motivations of Hordak, it is not an essential story to read if you are following the main He-Man comic, or if you are planning on picking up the DC crossover. Speaking of the crossover, there is one image at the end, that is either a very coincidental shadow, or crossover tease. 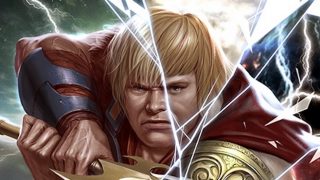