It’s Villains Month in the DC Universe, which means the return of everyone’s favorite evil, telepathic gorilla! Check out the DCN Review of Grodd #1!

The ape with delusions of grandeur, Grodd, is one of the most popular villains in the DC Universe that isn’t associated with Batman or Superman, and I have no idea why.  I simply have never found the character interesting. The rest of the Flash’s Rogues are so full of personality; Grodd is rather one-note by comparison. Thankfully, the creative team of Brian Buccellato and Chris Batista deliver an entertaining story, despite falling into the typical tropes associated with the gorilla conqueror.

Brian Buccellato takes the reigns of scripting without his usual partner in crime, Francis Manapul, and once more proves his understanding of who these characters are.  Rather than shying away from the silly, one dimensional elements of Grodd’s character, Buccellato ratchets them up to eleven, and the story is better for it.  Even with the Justice League, and therefore the Flash, supposedly defeated, the outcome of Grodd’s attack on the Gem Cities came as a surprise.  Moreover, the aftermath might just be the strongest portrayal of Grodd I’ve seen in any media.

The artwork provided by Chris Batista is spot on for this one-shot.  Batista’s pencils are expressive and full of detail that provide differentiation in an issue where half the cast is of Simian origin.  And though this issue is a character study, it is not without action. There are some striking imagery as Grodd battles both his fellow apes and humanity.

This issue is supposed to take place before the fall of the Justice League–those are the first words of the story.  However, Grodd shows up proclaiming that the Flash and Justice League are defeated.  This contradiction leads to some confusion as to when this issue is supposed to take place.  While it is clear by issue’s end that “Forever Evil” has begun, the confusion that the beginning of the issue presents was a big distraction in an otherwise strong issue.

Gorilla Grodd takes the spotlight in Week One of Villains Month.  The creative team of Buccellato and Batista deliver an engaging story that has both solid action and strong character development.  I look forward to how Buccellato handles the villain going forward, especially as this leads into “Forever Evil: Rogues Rebellion.” Be sure to check this issue out! 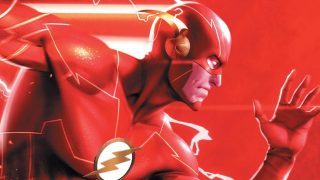