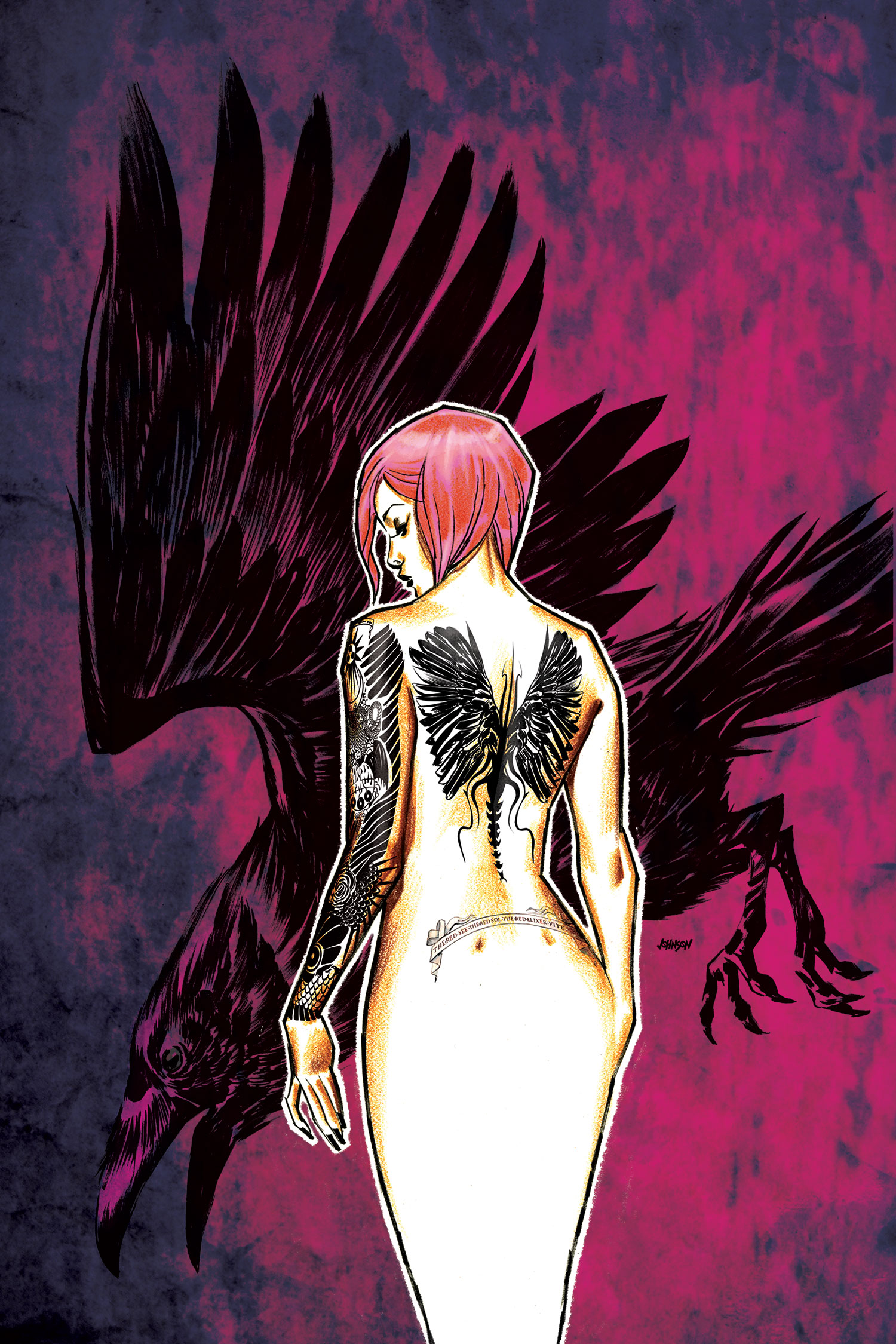 Caitlin Kittredge who is most famous for her Black London series of books is making her debut in comics in October when the new Vertigo title Coffin Hill is released. She sat down with Comic Vine to share her insights on the new series.  Below are the highlights from the interview.

* The story was originally meant to be a novel

* They will be several mysteries going on at once

* Caitlin did give some specific direction to the art team

Below are the preview pages for the book!

Below is the full transcript from Comic Vine.

Comic Vine: COFFIN HILL deals with a teenage girl falling into a dark world of sex, drugs and witchcraft. When did you first come up with the story and character, Eve Coffin?

Caitlin Kittredge: I came up with the first iteration of Eve probably three or four years ago. I started off writing it as a prose novel. It started off as an idea for a novel but I could never make it quite work. When I got in touch with Shelly Bond at Vertigo, she asked me if I had anything that was kind of supernatural-based, as far as stories go. I said as a matter of fact, I do. I have this story about a witch and black magic. She liked it and it went from there.

Eve’s been in my head for a while in different versions. I’m glad that this is the one that finally came out.

CV: So you were thinking of writing the story as a novel?

CK: Yeah, it started off as a couple chapters of a novel. I played with it for about a year but I just could never make it work. Then I just got side tracked by other things and other deadlines.

When I pulled it out of the file I thought it wasn’t half bad. It went from there and turned into COFFIN HILL. It’s pretty far from that first version I have on my hard drive but the spirit of Eve is most definitely the same.

CV: Will the series start out with that night she awoke in the woods covered in blood or will the current day story flashback to that time period?

CK: You can see part of what happens that night, when she wakes up in the woods in the first issue. You also get to see in the present day, what brought her back to her home town of Coffin Hill. She takes up the reigns of the mystery of what actually did happen on that night because even her three friends who were out in the woods have a part of the story. None has the whole story. The first issue is very much about her return in the present day and finally facing the stuff that went wrong and what actually happened to her.

CV: Will the series focus on Eve trying to find answers to that night or will there be other mysteries and situations that arise?

CK: She definitely is searching for answers to what happened that night, to quiet her own personal demons. There is a problem she does discovers when she arrives back in her home town. There are several teenagers around, the same age she was, when she and her friends were involved in this ritual and have gone missing. The police are baffled and she sees a lot of the hallmarks of the same sort of black magic going on around these kids. She gets drawn back into this mystery trying to find the missing kids. The missing persons case keeps getting bigger and bigger. It involves more of the same people. She’s also working that track, in the present day, while trying to find the connection to her and her friends years ago. There’s several mysteries in this story going side by side.

CV: How far out do you have the series planned?

CK: I can say that I just turned in the final issue for the first story arc. I’m waiting to hear from Shelly if she likes it. I’ve just been really involved in making sure the first story I want to tell is perfect, that this first issue is perfect. I definitely have ideas but I don’t want to say a lot more than that. I try to surprise readers with the first issue and with the subsequent issues and I want people to keep being surprised. I will reveal my plans when the time is right.

CV: Were you involved in the character designs?

CK: I definitely gave my wonderful artist, Inaki Miranda, some direction. Generally here’s what I’m thinking, “I think she should be kind of small. I think she should have darker hair. In present day, maybe she should have a sort of punk rock look to her.” He’s just done such a wonderful job. He’s been running with what I gave him. I really do just trust him to come up with something that looks great. In the initial stages I definitely had my ideas what I wanted the characters to look like but there’s some he came up with. They look amazing. Better than anything I could have come up with. It’s been a very collaborative process and it’s been great.

CV: Was it an easy transition writing a comic book script compared to a novel?

CK: I wouldn’t say it was easy. It was very different. There was definitely a learning curve. Once I got into the groove of what it meant to script a story versus typing a story out in prose form, it was very interesting and challenging for me. Shelly was great. She gave me a lot of direction in the first issue. After that, it’s gotten easier and easier visualizing in script mode in my head. They’re two very different forms of writing with two different ways to convey your story. It’s been a lot of fun to learn.

CV: How dark or gruesome will COFFIN HILL get?

CK: As dark and gruesome as I can possibly imagine. I can go pretty dark. So definitely dark. I try not to do gore for the sake of gore but there’s definitely gore in there. There’s a lot of bloody guts and other gross stuff.

CV: You’ve written several novels in the Black London and the Nocturne City series. Have you ever thought of those being adapted into comics?

CK: I personally think that would be tons of fun. I haven’t really had the opportunity yet. Then this opportunity to write COFFIN HILL came along. It’s been the best possible first experience with comic I could have imagined. I got to tell this totally fresh story that’s divorced from my other work. I think it made me really free to run with other things that I might not have otherwise tried. I didn’t feel constrained at all. I don’t know, the idea of adapting some of my novels into comics would be lots of fun.

CV: So we could see future comics from you in the future?

CK: I really can’t say. Like I said, I would definitely jump on the possibility if it came up. I was telling someone earlier, COFFIN HILL has been my life for like the past six months. I’ve been working so hard with Shelly and Inaki to make the first issue great and the first story arc really strong. I haven’t had time for anything else, including a social life but it’s been totally worth it! [laughs] I’m very very excited.