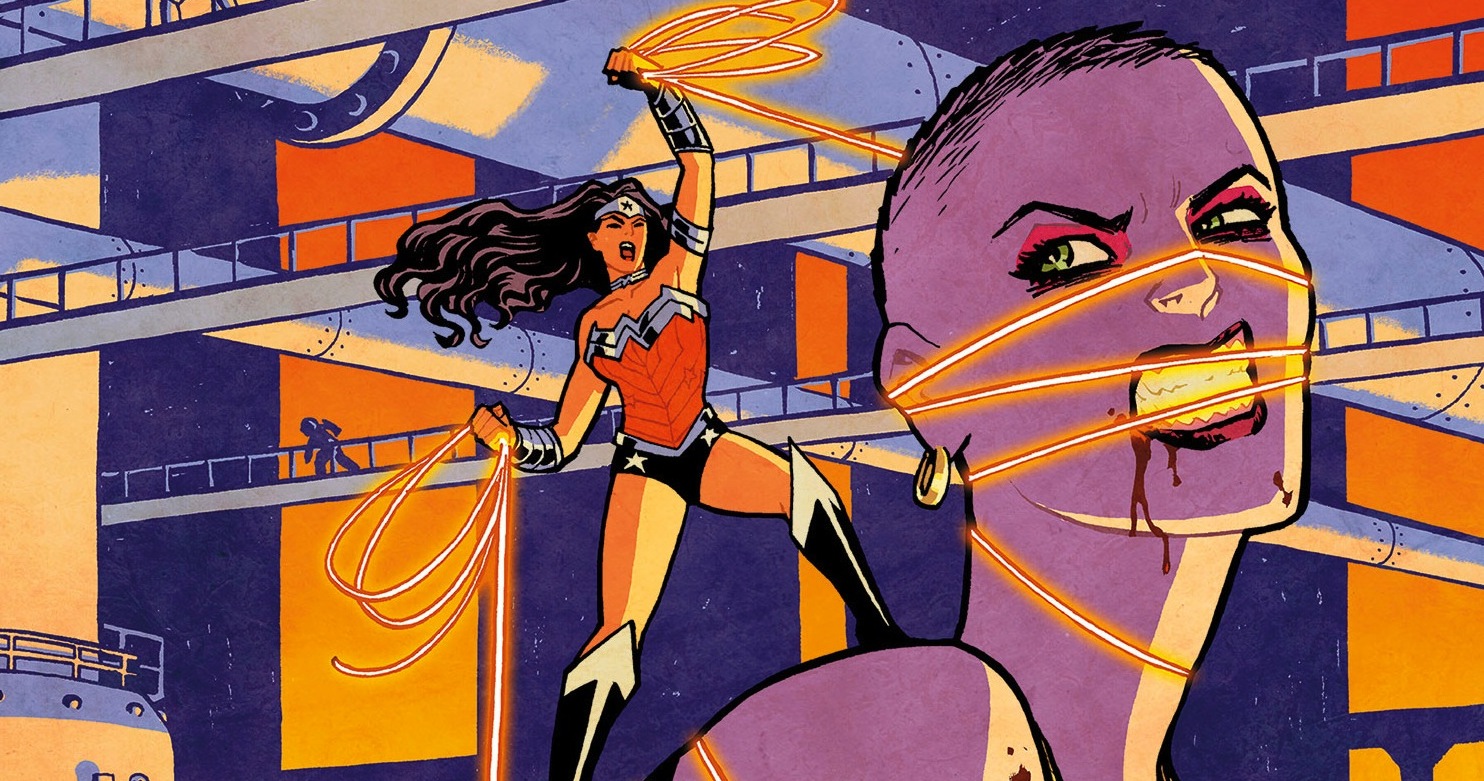 Wonder Woman #25, written by series scribe Brian Azzarello and featuring artwork by Goran Sudzuka, continues the series with another issue heavy on characterization and development. But action fans need not worry, as there are some very fun match ups present as well.

So how does the issue stack up to Azzarello’s usual high quality?

Brian Azzarello has been the sole writer of Wonder Woman (with the exception of the very excellent Wonder Woman #23.1: Cheetah by John Ostrander) for the past 25 issues. Since the beginning of the New 52, he has been crafting a tale both epic and fiercely personal. Diana’s struggles aren’t with villainous outside forces, they are with her own family. Yet even with such a large cast of characters, Azzarello manages to continually develop his characters and their conflicts, issue #25 being no exception. Special attention is given here to Cassandra, who, with the First Born out of the way, is quickly becoming a very real and dangerous adversary. Though her plans are still unknown, Azzarello drops just enough hints to entice the reader to press on.

The same goes for his characterization of Strife. What exactly is she up to? Whatever it is, surely it can’t be good. This issue is heavy on mystery, with only a hint of resolution. But as has been the case for the majority of his run, Azzarello’s Wonder Woman isn’t so much about the destination as it is about the journey.

Wonder Woman #25 does not shirk on the quieter moments and it is here that the book really shines. We gain a little more insight into Hera’s feelings on her recent mortality. There are also some very pleasantly comedic panels between Zola and Hera, who seem to have become fast friends. Considering that the series began with Hera trying to kill Zola and her unborn child, it is a pleasure to see the characters grow, change, and develop over time.

Another major cast member, Orion, returns, though he doesn’t seem to have changed much. His “hit first, ask questions later” attitude feels a bit like back pedaling, especially considering his heroic actions just a few issues prior. However, it is good that Azzarello has not forgotten about him.

Artist Goran Sudzuka does a wonderful job emulating Cliff Chiang’s pencils in this issue. His line work is fashionable, crisp, and expressive. His work on one scene involving the torture of the First Born is particularly gruesome. The choice to present Strife in a shroud is especially well done, though I can’t help but wonder why Diana is always seen wearing her uniform, even in noncombat situations.

Azzarello excels at the “slow burn” form of storytelling presented here. While it never feels like filler, it can make this title feel a bit slow when compared to other titles in the DCU. Wonder Woman is essentially fighting the same conflicts she has the entirety of the series and that may be off-putting to some readers.

The artwork here is definitely well done, but Cliff Chiang’s absence is felt more keenly with every issue. True, his last work was done back in issue #23, but due to Villain’s Month, we have no seen interiors from Chiang since August. With such gorgeous covers, it is quite a shame that Mr. Chiang cannot produce a monthly book with more frequency.

Brian Azzarello and Goran Sudzuka deliver another exciting issue with Wonder Woman #25. The title continues to be one of the best DCU books out today, with interesting characters, a deep and labyrinthine plot, and the occasional epic showdown. If only Cliff Chiang could stick around for more than issue at a time!