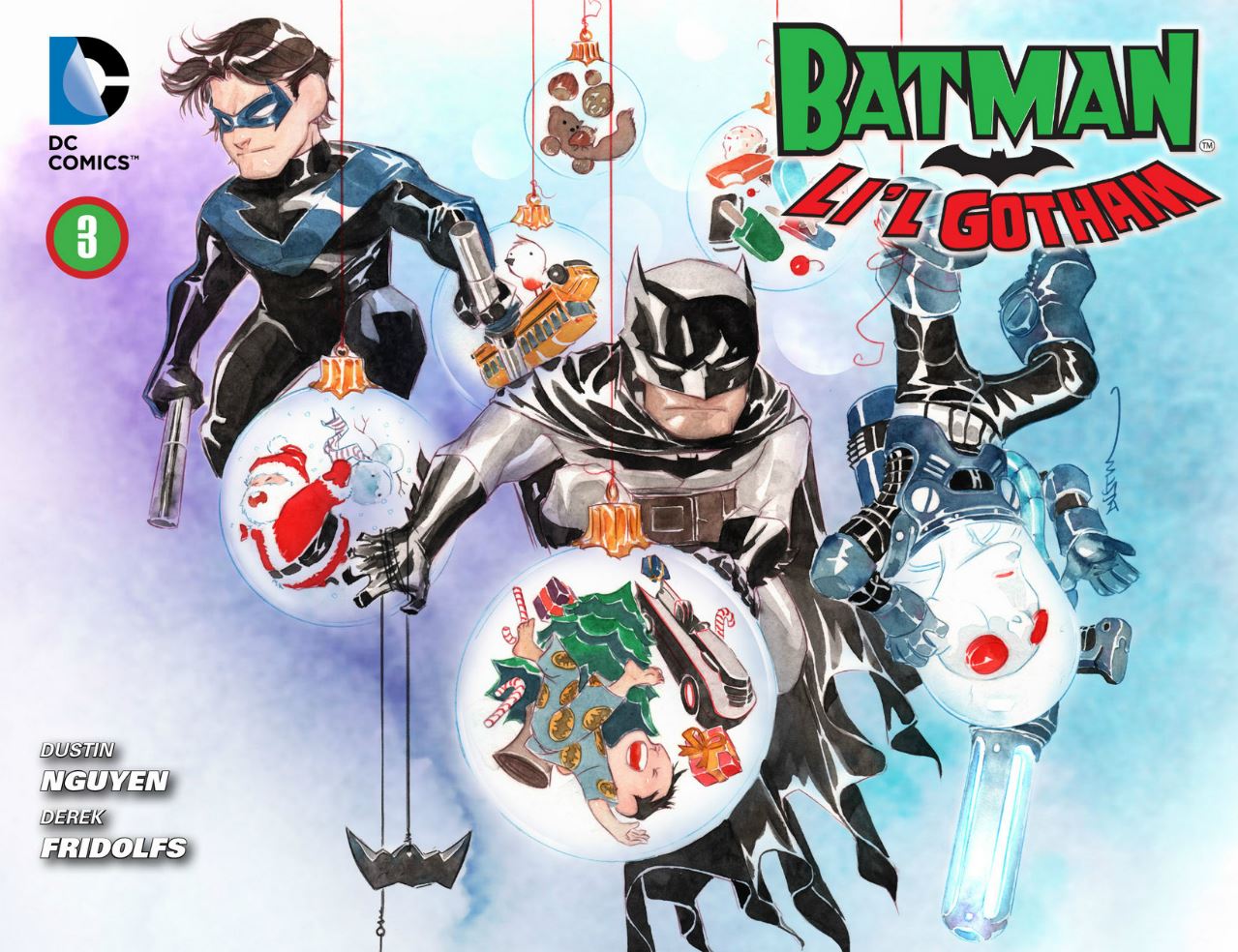 The Dark Knight. The Masked Manhunter. Vengeance. The Night.

In 1986, Frank Miller left an indelible mark on Batman with eight total issues comprising the two stories; The Dark Knight Returns and Batman: Year One. Batman was transformed into an archetype that would be emblematic of the “grim and gritty” style of stories in mainstream superhero fare. He was a hero irrevocably transformed by tragedy; a brutal combatant who may be as unstable as the villains he fights. These stories still stand as high watermarks in the medium and are considered to be quintessential depictions of the character.

In the 1960s, Batman was an important part of the popular culture scene as well. Adam West made up the final of the decade’s “Three B’s”: The Beatles, Bond, and Batman. Yet this incarnation of the character, both on television and in comics, lacked the pathos of Miller or Azzarello’s version. Batman was a camp figure that the public openly embraced (1). The Batman who danced to groovy music and kept Bat-Shark Repellant on his utility belt was the dominant presentation of the character for many years.

At other times, he has been a masked vigilante working to stop crime with twin pistols (Bill Finger) or a globetrotting adventurer (Dennis O’Neil and Neal Adams). Despite the popular current perception of the character, there may only be one aspect that has always held true: Batman is an infinitely flexible character. Yet the majority of stories—almost thirty years after the publication of The Dark Knight Returns—continue to embrace the central conceit of Frank Miller’s interpretation (2). That’s why Dustin Nguyen’s Li’l Gotham is far and away the best Batman comic currently available. It presents—amongst more than a dozen titles featuring the characters—a refreshing new take on a modern myth.

Nguyen’s watercolors are central in setting Li’l Gotham apart from its contemporaries. By avoiding the pencil and ink formatting altogether, it establishes itself as “the other”; something separate from the many other Bat-stories released each month. Watercolors create a soft, blurring palette evocative of children’s stories and dream sequences. Every panel informs you that the comic is intended for all ages and that it should be read with a smile. Without evaluating the writing or story, it’s possible to determine the mood of Li’l Gotham from the art alone.

Nguyen’s character designs reinforce this effect. Reminiscent of bobble heads, proportions are skewed in order to emphasize faces. This provides a two-fold effect: evoking iconic depictions of characters and portraying them as children. Young children, especially babies, have larger heads too large to conform to adult proportions. Batman and Alfred are presented in child-like forms, despite their obvious age. Their youth is an effect of their nature, not their years. They are icons; classics that are preserved by their pure nature.

Nguyen recognizes that readers are cognizant of the characters that he is illustrating, so the goal is not to introduce them, but to capture their essential nature. The enlarged heads focus on the most significant aspects of characters whether it’s Batman’s cowl and scowl, or Mr. Freeze’s helmet and goggles. Details are as large as they need to be. In this, he succeeds in creating depictions that are as iconic as any since Paul Dini’s Batman: The Animated Series (3). Realism is not even a consideration. The art is primarily concerned with the effect of its aesthetics in evoking the essential nature of the characters.

Not only is Nguyen’s art aesthetically pleasing in and of itself, but it also succeeds in creating an air of universality about the stories. The combination of watercolors with iconic designs allows a diverse readership to enjoy Li’l Gotham. This accessibility to young and old, male and female, first-time and long-time readers is a core component of the comic’s success.

Like Bill Watterson’s Calvin & Hobbes, or Maurice Sendak’s Where the Wild Things Are, it manages to appeal to a very diverse audience without becoming plain or insipid in nature. This is largely due to Nguyen and his writing partner Derek Fridolfs’ ability to tap into the essential story of the comic. Calvin & Hobbes’ appeal is based on that it’s always, at its core, a tale of friendship. No matter what demographic a reader occupies, that story matters. Li’l Gotham is a comic about treating others well.

In Li’l Gotham #3, Batman and Nightwing pursue Mr. Freeze who has kidnapped a bus full of children. When confronting him, they never once strike him, choosing instead to disable his freeze ray and discuss his motives. This discussion proves to be as entertaining as any fight sequence. It humanizes Freeze, who wanted to seclude the children from the evils of the world, and provides one of the most poignant Batman moments in recent memory. Freeze is still a villain, but he’s also human. In the end, with Batman’s help, he recognizes that what he is doing is wrong. Batman doesn’t need to rely on his physical strength to stop Freeze, he only requires a certain degree of emotional intelligence. Pulling on his own tragedy, he explains that every child deserves to have parents, and that’s something Freeze cannot provide. It’s an effective solution that shows a type of strength not typically associated with superheroes.

The story doesn’t end there, though. It’s not enough that the children are saved in time for Christmas, because they are not the only people who need help. The comic ends with Bruce Wayne, his son Damian, and others singing carols to Mr. Freeze in Arkham Asylum. He garners the same respect and treatment as his victims, for he is human too. Batman doesn’t stop with freeing the children from their captivity; he frees Mr. Freeze from his own captivity as well, letting him know that he is not alone, that people do care. Victory doesn’t come at the cost of Freeze’s bruised body, but his small smile.

Damian, still alive in this continuity-free title, is the most violent character. He can be seen tying up Alfred or reveling in smashing monsters with a Jaeger-like robot. Although it is often funny to see him act up, his violent impulses are what mark him as the youngest member of the cast. Violence has no place amongst adults, even the villains, whose crimes are cheeky in nature. The Joker would never lift a crow bar in Li’l Gotham; that’s beneath even Batman’s arch-nemesis.

Li’l Gotham reveals that Batman does not need to be vengeful due to the loss of his parents. He is not required to be violent or mentally unstable. Instead, he is capable of being a father, a friend, and a guardian who does his best to watch out for everyone. The lesson behind Li’l Gotham is that in the face of tragedy, which is central to Batman in all incarnations, it’s still possible to respond with kindness.

That’s a new idea. There are threads of it in previous Batman comics, like when he delivers a Thanksgiving meal to Solomon Grundy in Jeph Loeb and Tim Sale’s “The Long Halloween”, but it has always been more of an after thought than a central theme. It takes all of the core ideas that follow Batman through his many incarnations—an indomitable will, unlimited resources, and a tragic origin—then uses them to craft something new.

It’s both a similarity and an antithesis. Negatively, it posits that Batman is not inherently violent, unbalanced, or “grim and gritty”. Many great stories have been told using these distinctive traits, but they are not a necessary component of the legend. Positively, Batman can be a figure that represents the power of kindness. Batman’s war on crime can be fought with carols and dialogue as effectively as it can with batarangs and fisticuffs. That thesis is something that can appeal to any maturity of reader. For children, it’s a repetition of the ever-valuable golden rule. For adults, it goes a bit further. In a country with the highest rate of imprisonment (0.743% as of 2009) in the world, it’s important to consider alternatives to dealing with crime. Li’l Gotham challenges readers to view criminals as “just folk” (4) deserving of the same kindness and treatment we would provide our neighbors. It emphasizes peaceful solutions over violent ones, which is something adult readers could benefit from as much as children.

Some comic readers may disregard Li’l Gotham because it’s not part of the current New 52 continuity. That is a grievous error. Remember that most of the classic Batman stories—the ones that define our understanding of the character like The Dark Knight Returns, Detective Comics #27, and Batman: The Animated Series—are not in continuity, yet they’re more important than any comic currently published under the New 52 banner. Li’l Gotham possesses a similar vision to those classic pieces, unique in its art and ideas, yet true to the character. It’s something new.

Art, at its best, is generative. It seeks to add to what has come before. Li’l Gotham succeeds on a monumental scale. Not since 1986, when Frank Miller crafted a new vision of Batman, has any work succeeded in creating something so inventive and resonant with one of the most popular characters in the world. It’s comic book art at its finest.

(1) It appears that people are beginning to embrace the camp approach to Batman again. Mike Allred’s work on Batman ’66 has been widely lauded and many toys and accessories featuring Adam West as Batman are being pushed into stores before Christmas. For whatever reason, the public is much more accepting of a silly, campy Batman now than they were when Joel Schumacher directed Batman and Robin.

(2) I think it’s worth noting that Miller’s take on the character is derived from his outstanding run on Daredevil at Marvel between 1979 and 1983. It’s about a street-level vigilante with an inherent sense of justice driven by the brutal murder of a parent to violently lash out at crime dressed as a frightening other. There’s an argument to be made that many modern Batman stories are, at their heart, Daredevil stories, but that’s another topic entirely.

(3) Batman: The Animated Series is the most iconic representation of the Batman mythos ever created. Just like its magnificent title sequence (which doesn’t even need to bother with a title) it starts in media res. It’s assumed that Batman, Robin, The Joker, and the cadre of supporting characters are already known, requiring no explanation. Instead, it’s better to explore what makes these characters interesting, what ideas they reflect, and why they matter to the audience.

(4) This is a favorite phrase of mine pulled from Harper Lee’s To Kill a Mockingbird, when Scout is discussing what types of people are in the world. “I think there’s just one kind of folks. Folks.” If you’ve never read Lee’s classic before, you’re doing yourself a serious disservice. It’s one of the most important novels of the 20th Century and is infinitely readable.