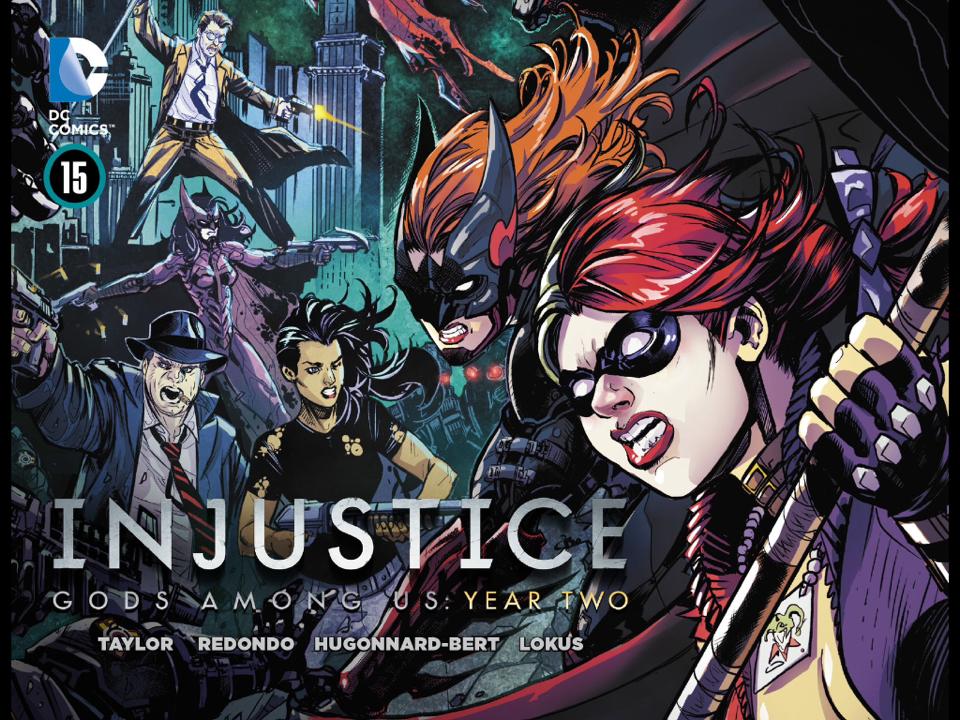 More action packed magnificence as INJUSTICE continues its whirlwind of calamity across the DC pages. This week’s issue perpetuates the already smash hit series with another thrilling installment to the ongoing troubles in the year 2 universe that I simply couldn’t seem to write about fast enough.

The issue was definitely moment after moment of excitement with the return of the beloved the Birds of Prey and the Batman crew. I was beyond happy to see old favorites getting the spotlight in this issue and putting the bite back into the story. I haven’t read a work so addictive as this, since I can never seem to acquire enough of the enamoring story line and spectacular art that has encapsulated the heart of this adventure. The dark, edgy contrasted tones strike that epic power cord on every page emphasizing the dramatic scripts content and solemn nature through the realistic expressions and intricate details, trapping readers with each panel and breathing life into what some perceive as drawings but are now so much more complex than that.

Though I had been told by Tom Taylor himself at a recent convention, I never expected to be crying so much as I did with this issue. The thunder before the storm, I felt the powerful speech given by the dark Bat himself resonate within soul. The stirring words coupled with the images of my most loved characters saying goodbye to their loved ones, made my heart skip a beat especially since we finally saw Batwoman with Renee, married to another woman!! Both Tom and Xermanico do justice to the subtle tributes to not only her story, but all the other couples that have been shattered across the DC universe through the years. They now somehow mend them all for this one moment that will forever be embedded into this universes time span and is that bittersweet goodbye DC has become so famous for.

I don’t even know where to begin as this was the issue as the inspiring speech of Batmans call to arms made me want to pick up a sword and shield of my own and join the stand against what all DC fans have been waiting for, the Bat team verses the Superman team. Most people I speak to are on one side or the other, and if you can’t tell I’m a Gotham girl all the way. The parallel of Batmans words with the heavy emotional imagery will shatter readers feelings especially if you have the biggest soft spot for the Bat team, as the reality hits home to how serious the battle is about to become. The script follows out onto the pages really getting the powerful message across not just one set of characters but across multiple lives that are all touched or affected but the situation. It’s not something easily done but executed very well with these neatly arranged panels and has set the stage for one of the most anticipated fights DC readers have seen in decades.

I want to say nothing is negative but then again, nothing is perfect. I’m not much of a Green Lantern fan, but I found the section at the beginning slightly jumpy with their continuation from issue 15. I felt we should have started with something more from Superman and his speech addressing the world. I wanted to see his fire and passion ultimately resulting in Batman doing the same. To me, the opposing forces are two sides of the same coin and mimic each other as both heroes and enemies. I would have liked to have seen Superman with his team almost defending their stand point for war to be called upon and his justifications for it.

Whatever side of the fence you bat for, this issue of INJUSTICE will have you gripping your seat, telling your hand to move faster and your eyes to read every letter printed on the page. It is a magical issue blending superb scripting with emotive artworks that really do breathe these fictional characters to life. Grab this issue and feel yourself take up arms for the call to war.