Five years ago, DC Comics, and in particular writer Grant Morrison announced a very different and ambitious project called “The Multiversity.” A comic event and project which is set to tell subtly interconnected stories from between various DC Comics earths.

Today the comic book industry has become a much different playing field than what it was half a decade ago, with DC in particular having rebooted their entire comic book line in late 2011 which continues to this day. However the plan for “The Multiversity” has remained basically without any major changes from the announcement in 2009. It all begins in August with Ivan Reis and Joe Prado-illustrated “Multiversity #1” which will be followed by stories like “The Society of Super-Heroes: Conquerors of the Counter-World” illustrated by Chris Sprouse and Karl Story, “The Just” illustrated by Ben Oliver  and “Pax Americana,” illustrated by Morrison’s collaborator on the legendary “All Star Superman” Frank Quietly.

This past weekend at Comic Con International in San Diego Comic Book Resources spoke with Grant Morrison about this project.

CBR News: Grant, you’ve been working on “The Multiversity” for many years, and now we’re less than a month away from the first installment being released — how excited are you to finally get this out there in the world?

In some cases, comics have caught up with a lot of what I’ve been doing. I just want it out there. I want it finished, before everyone does it.

It was more than five years ago that word first got out on “Multiversity.” Not only has the comics world changed in five years, DC Comics certainly has changed a lot in that time. How has the story changed for you — not necessarily even in the writing of it, but how you see its place in the current comics ecosystem?

It was always slightly to one side of what was happening in the main DC Universe anyway, so we didn’t have to make many changes to the individual books. In the guidebook, I was much more aware at the time to make sure that it tied into what was happening in the New 52. I think it worked out better, because the New 52 came out under that banner. You’ve been waiting for, “What the hell is the 52?” and now this is the real 52. This is what we’ve been waiting for. It became like an expansion of what we’ve got.

I think it works better. Before it was slightly off on its own, and it might have been easy to not read, because it didn’t tie into what was really happening. But what we’ve done now is tied it in to what’s going on. It kind of ties-in with what’s happening with Darkseid, and all the things happening in books like “Earth 2” Even something like Earth 2, for instance, when we started this project, it was Geoff Johns‘ version of Earth 2, with the [Justice Society Infinity], but now we’re using the new, James Robinson version of “Earth 2,” which now Tom Taylor’s doing. A couple of those little things changed, and we deliberately made a point of making the costumes reflect the Jim Lee designs from New 52. So when you see parallel universe versions of someone like The Flash, he kind of looks like Jim Lee designed it. [Laughs]

You said that comics have caught up a little bit more to the story — interested to hear a bit more of that, and how you view the story’s place in the wider world of comics in general.

I think especially since Marvel and Jonathan Hicks been doing this big sort of Marvel “Multiversity” story. Our first issue opens with the DC characters meeting the DC version of the Marvel Universe — so there’s now this really weird thing happening, where everyone’s doing versions of everyone else’s characters meeting somewhere. [Laughs] So the world kind of caught up with that one. We’ve got a confrontation between our own Justice League and “The Retaliators,” this kind of version of the Avengers, in the first issue. It’s almost as if it’s happening at the exact same time as Jonathan’s doing his book.

There are a couple of things that I notice; some things that Kurt Busiek’s been doing in “Astro City.” His latest “Astro City” stuff’s really great. He’s doing some weird meta thing, and it’s almost a little bit like one of the books. So it kind of feels if I don’t get this out now, it’s going to be old news. [Laughs]

There’s a long established history of comics in taking recognizable characters, like Superman, and reinventing them and giving them a different take. That’s a huge part, clearly, of what “Multiversity” is. Is that the main fun for you? Taking these characters in different directions than people would expect?

I’ve just always loved it. If you look at “All-Star Superman” and “Batman,” I’ve always liked dealing with the variants. That’s where the interest for me is. I think these characters are so rich, and there have been so many versions of them over the years, that the only way to really get a good angle on them is to see all the different variants. It’s hard to understand how cool and heroic Batman is until you’ve seen how awful Nazi Batman is. But it does give a new take — “What if this had happened to Batman?” What if instead of Bruce Wayne, he’s the grandson of [Hans] von Hammer, the Enemy Ace?

The idea of variants really excites me. It’s just this dumb kid thing — there’s nothing more exciting than seeing Professor Zoom, because he’s like the Flash, but he’s yellow. That stuff was just always a big thing. The colors, and the ridiculous spectrum of possibilities that these characters offer.

So yeah, that’s a big part of it, but it’s not the only part. One of the things we’ve also tried to do is to make sure every single issue is completely different. They have to seem as if they’re all from different universes — so different cover styles, different storytelling styles. Hopefully in this one, there’s something for everybody. The Shazam book, “Thunderworld,” is kind of all-ages. The “Pax Americana,” kind of a “Watchmen” take, is very much a grown-up comic. They’re all completely different types of stories. Again, it’s pulling the rich diversity of these characters and these settings in order to do more with them than I think’s been done before.

Do you think there’s something about the DC heroes in specific that make them more amenable to this type of stretching and changing?

It does for me, because I think the characters have always been quite solid in the DC Universe. If you look at someone like Iron Man, he alters his armor all the time anyway, so it’s kind of hard to use six [versions of] Iron Man that look a little bit different.

I think the characters have always been more metaphoric, and more of a capacity to twist and turn. With DC, the big archetypal characters are kind of like this human pantheon — it’s what we dream of when we go to bed at night. Because of that, it’s really easy to make Superman “Communist Superman.” It is quite different — “Communist Captain America” may work, but it’s not as good as, “Here’s Communist Superman.” “Here’s the vampire Superman.” There’s just something about that “S” and the Bat-sign and those very primitive, simple emblems of the DC Universe.

You spoke of making each book distinct, and appear like they’re each from a different universe — a huge part of that are the artists you’re working with, which is a really stellar lineup of talent.

They’re brilliant. I think they’re all doing the best work I’ve ever seen. The first one and the final one, which are the bookends, with Ivan Reis — the stuff that he and Joe Prado have done, it’s the most beautiful superhero art. I grew up with Neal Adams and John Byrne and Alan Davis, and Ivan can do them all. That classic, romantic, high-cheekbones, beautiful women. It’s just classic superhero comics. So he’s doing that one, which is kind of its own “Crisis”-style comic with a hundred new superheroes and cosmic stuff. They’ve killed on it. And then Chris Sprouse is doing just an amazing job on the pulp stuff.

When you see Ben Oliver’s style…

Yeah, absolutely. It’s just these bored kids trying to find something to do. That’s one of my favorites.

Everyone’s nailed the texture. When you see Cameron Stewart”s “Thunderworld,” I think it’s the best drawings of the Shazam characters since C.C. Beck did it. We bring it back to the source, the actor Fred MacMurray, who Shazam was originally based on. He used him as the model. It just looks incredible. The artists have really come through and made everything look very distinct.

This is such a thorough exploration of DC heroes and the different things that can be done with them — and currently you’ve got a good amount of creator-owned stuff going on. Do you find you still have a lot to say with superheroes, or is this sort of a culmination for you, at least for now?

This one feels like a culmination, but I’ve been doing this “Wonder Woman” book, that’s coming out next year. It’s given me some new ways into it.

I think [“The Multiversity”], particularly, is a culmination of everything I’ve been doing since I came back to DC in 2003. This kind of calls back to “Final Crisis” and “Seven Soldiers.” It’s all in there, and it does feel like, ‘here’s the capstone to that.’ But every time I say that, I go away and do something else, and then get a new angle on these characters and I want to come back.

A little bit, in the sense that each one’s its own thing. But it’s different because each book is a complete story. You don’t have to buy four. What I like about it is, I think it’s really nice to get a comic that begins and ends, and read the one thing in your hand, and that’s it. You don’t have to speculate.

What we’ve done is a linear, baton-passing thing, because each comic universe reads the comics of the previous universe. They get published in that world. So they’re all reading each other’s adventures, and this is how they finally learn to defeat the bad guy. 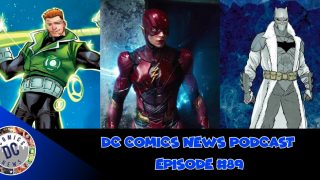