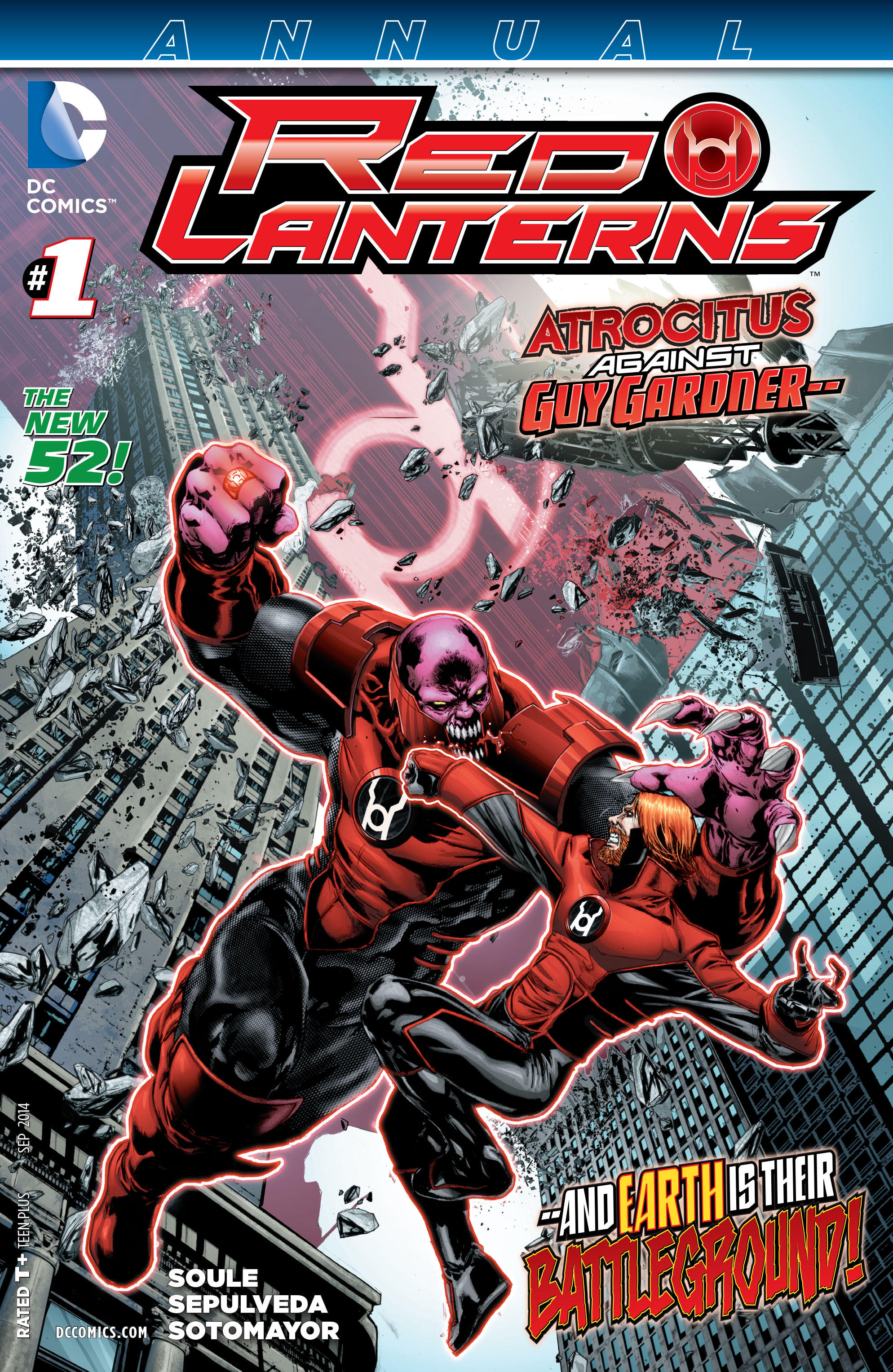 RED LANTERNS ANNUAL #1 by Charles Soule with art by Miguel Sepulveda and colors by Chris Sotomayor is trying really hard to be a big Hollywood action movie.

This issue went big. Really big. Especially when you compare it to the rather dull and more personal previous issue. In fact, I had a bit of a hard time reconciling it with what had come before. There’s nothing here that contradicts any previous stuff or really comes out of nowhere, so that’s probably unfair to the comic. I liked it a lot better than the that previous issue, but despite that, I came away with many more complaints than I had things to praise.

First, there was a lot of exciting stuff going on here. Atrocitus first attacks the Earth and then unleashes red rage rings to take advantage of all the people getting angry about the alien invasion, so now there are a bunch of berserk humans ravaging the world. It’s a pretty clever plan and lends itself to some cool action. Batman shows up as if to say, “We other superheroes are totally here working on this big earth-endangering problem.” He breaks a new Red Lantern’s arm while Guy Gardner lands a double drop kick to the back of another’s neck. It’s the simple things in life that I find most enjoyable.

The issue was pretty funny in places as well with a couple of good jokes (jokes in a comic book? How odd!), including a fourth wall breaking allusion to not only the greatest moment in Batman’s history and Guy’s worst, but also to the fact that it happened in a different universe. Batman’s even got a weird little grimace in that panel. There’s nothing particularly interesting about the panel to panel storytelling of the art, but there are some aspects of Sepulveda’s work I really like, like the posing and the angles of the figures in the panels, and I especially like the way he draws the spaceships. Supergirl shows back up, as predicted, de-ringed. I’m glad to see her back around. I wish she was a permanent fixture of RED LANTERNS, but it doesn’t look like she’ll be getting her red ring back.

A member of Guy’s team dies in this issue, and despite having only read two previous issues, I felt sad about the death and hated to see him go, so good on Soule for making me care.

Like I said, the issue tries to go big in a Hollywood way, and it partially works, but not completely. The issue starts out with Atrocitus’s red lanterns destroying a bunch of real world famous landmarks in a very similar way to how many big CGI action and disaster movies do now. Seeing real world places destroyed in comics always leaves me uncomfortable. Mainstream superhero comics usually try to stick to a “the world outside your window” world, maintaining a sort of tenuous relationship with reader. I can take seeing the Daily Planet building destroyed constantly because it was never real, but seeing the Eiffel Tower destroyed in what is supposed to be a persistent world that is similar to our own does more to shatter the illusion that the world of the comic could be my world than an alien invasion does.

There’s a great deal of detail in the art that sometimes works, but often just becomes too much. The aforementioned destruction is almost fetishized with the amount of rubble and debris in all of the action planets, the black parts of the suits are strangely textured to look like the material comic book movie costumes are made of, the few scenes of gore are way more bloody than what I like to see in my super hero comics, there’s a very Hollywood-esque dying quote from the character who dies, and it almost seems like there is just a slight extra focus put on teeth, and not just on  the aliens with no lips like Atrocitus. Seriously, how often do you really notice the teeth in comics? I couldn’t stop looking at everybody’s in this one.  I had kind of noticed this in the previous issues as well, despite being by different artists. Perhaps Atrocitus’s toothy face sets the standard for all the other characters.

Once again, as I’ve noticed in the previous issues, there’s some really, really lazy plotting to justify hopping quickly from Point A to B. Last issue, one of Guy’s lanterns was captured by Atrocitus and pledged loyalty to him. In this issue, after Atrocitus has unleashed the red rings on earth, the former good guy lantern says there is a new red on the planet who is very powerful and he would like to go find that person and return them to reason. Atrocitus then flat out says that that lantern is probably planning to betray him, but he doesn’t care and tells him he can go do whatever he wants. If you are going to be this blatant about the story beats, what’s the point of even having this story line? It deflates a lot of the tension to just lay out all the pieces like that.

Despite being put off by a few parts, I thought this issue was pretty good. Everything is set up nice and ready for the finale of the story arc next issue, and I’m looking forward to seeing how it’s going to end.

Buy this comic if you like ultimate destruction, guest stars, and sweet spaceships.