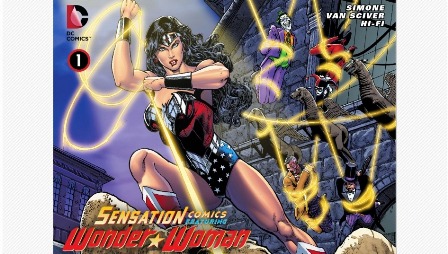 Right off the bat, the newest comic to the DC family tree, SENSATION COMICS, lives up to its name. With issue one featuring the Amazon heroine Wonder Woman, the comic is a whirlwind of Gotham villain smiting as she takes on all the nightmares that give Batman his worst headaches.

It’s a great time for Gail Simone’s signature tongue-in-cheek writing to return to the DC pages. With BIRDS OF PREY’s impending cancellation, it was the perfect time for Gail Simone to be given the first two issues of this new project. I loved how she brought back the familiar faces from characters that were lost in the 52 reboot, such as Oracle. The scripting will grab readers from the moment the story starts and takes them through a troubled evening in Gotham city. Girl power is still a dominating feature in Gail Simone’s writing, and I’m glad to see she hasn’t lost that spirit. Sometimes it’s not always about Batman or Superman, and that the girls can call the shots just as well. The digital first issue lived up to the hype since being announced, and I think starting with some of Gotham’s most terrible villains doing what they do best  is always a great way to grab the reader’s attention.

Ethan Van Sciver and Brian Miller make an amazing artistic duo. The sharp, bold colors really capture the true comic fantasy of DC’s most famous superstars. Coupled with the characters’ realistic details, the issue does have a very mature nature, bringing back some of the classic appearance and expression from back in the 90’s. It was a joy seeing so many of the old favorites taking on Wonder Woman together. The fact that Wonder Woman was the only one that Oracle could call to clean up for Batman gave this comic a whole new footing. Each time these characters are reinvented, it gets harder and harder to keep plots unique, but SENSATION executed a whole new original impression on what all DC fans know and love.

So many positives headline the newest project to DC. Not only is the artwork smashing, but the scripting returned the magical luster that I think was lost in the new 52. Since the reboot, DC went towards the darker side of the characters stories, but in SENSATION we have that comical wit back that captured readers from the beginning. It had me smiling with each page, and I found the composition of panels really highlighted the dramatic moments perfectly.

A small negative for me is the digital aspect of this comic being only available to those who are tech savvy. I would have loved to have seen this issue in both forms, but all good things come to those who wait.

Wonder Woman’s internal monologue was a little too much during some of the panels. I would have loved to have seen more banter with characters outside of the internal dialogue. Sometimes the characters need to stop thinking and speak more of their mind, provoking a reaction that makes the story flow.

A brilliant kick off to the SENSATION title, this issue is worth more than one read. With spectacular art and a sassy script, I know so many of the DC fans will be cheering to see the true spirit of their beloved characters returning. It’s definite “must have” on any reader’s list, for this week and the weeks to come.