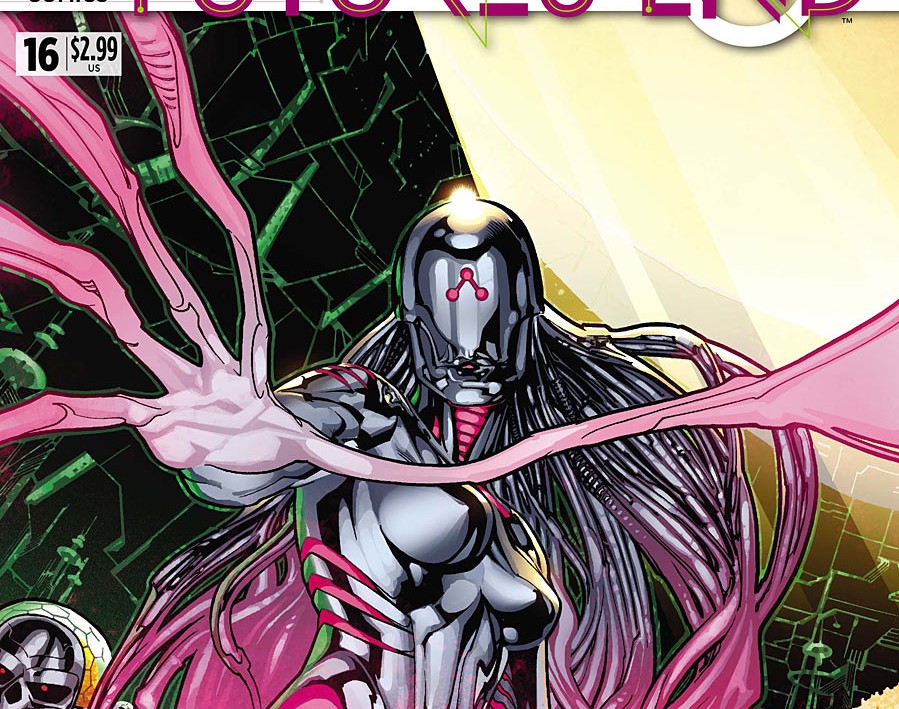 As the cover indicates, this week’s issue of FUTURES END reveals the secret behind Frankenstein, Amethyst and Hawkman’s captors. We also get introduced to the newly created Stormgaurd, who made his debut earlier in this series. Plenty of big moments are teased in this issue, so readers should make sure to pay close attention.

Early in the series we’re briefly introduced to the character we now know as Stormgaurd. Unfortunately, his appearances have been brief and almost non-existent since then. Thankfully issue #16 changes all that, as we delve head first into one of Stormgaurd’s undercover missions. The character shows great compassion and shows he has a strong moral compass, in only a few pages of light dialogue. This series has been known to drag things out at times, so it’s nice to have a clear and concise sequence that displays this character’s ideals.

Writers Brian Azzarello, Keith Giffen, Dan Jurgens, and Jeff Lemire  tease two very big impending moments in this issue that will likely make any fan of the series jump for joy. First is the reveal of Superman’s identity. Readers are given a hint, which helps narrow down the list of suspects but not a full reveal. This will likely come in next week’s issue, and will surely help shake up the series. Secondly, we discover that Mister Miracle is planning a massive prison break for the captives of Cadmus Island. Characters from EARTH 2 have only briefly been seen in the series. Hopefully a prison break results in readers finally seeing the citizens of Earth 2 let loose and display their full strength. Both of these reveals give me hope that the writers are about to really ramp up the action and deliver the moments fans have been waiting for.

Negatives
While it was nice to see Stormgaurd in action it also seemed kind of random. His storyline line seemed unrelated to the rest of the series and didn’t end on any sort of cliffhanger. I’m assuming there will be big things for Stormgaurd in the future but for now I’m left slightly confused.

The issue’s big reveal was much of a reveal at all. Maybe I’m alone here, but I feel everyone was already aware that Angela was now a minion of Brainiac. When you have the characters symbol on your face it tends to makes things quite obvious. It’s also revealed that the planet Frankenstein and company are stranded on is actually a planet sized spaceship. This too doesn’t come as a surprise to me since Braniac is known for his massive modes of transportation. I’ve been enjoying this storyline a lot but this slow and obvious reveal has really bogged things down.

The part of the issue that deals with Superman feels very repetitive. We have Superman fighting Rampage, and Lois Lane is around. I could be describing either this week or last week’s issue. I understand that this week is setting up a big reveal for next week, but some different elements should be introduced to make things feel fresh. Colour palette used for the setting is also very similar to setting of last week’s confrontation as well. Overall it just seems repetitive on all fronts.

Futures End is the book I really want to like. The first few issues quickly grabbed my attention, but now I’m finding I care less and less about the series. This week’s issue gives me hope that things are about to pick up, but unfortunately this series has gotten my hopes up before. Is this week’s excitement the beginning of something bigger or is it just another let down in the making? Only time will tell I suppose, but hopefully it’s the former since this series is rapidly approaching the half way mark.