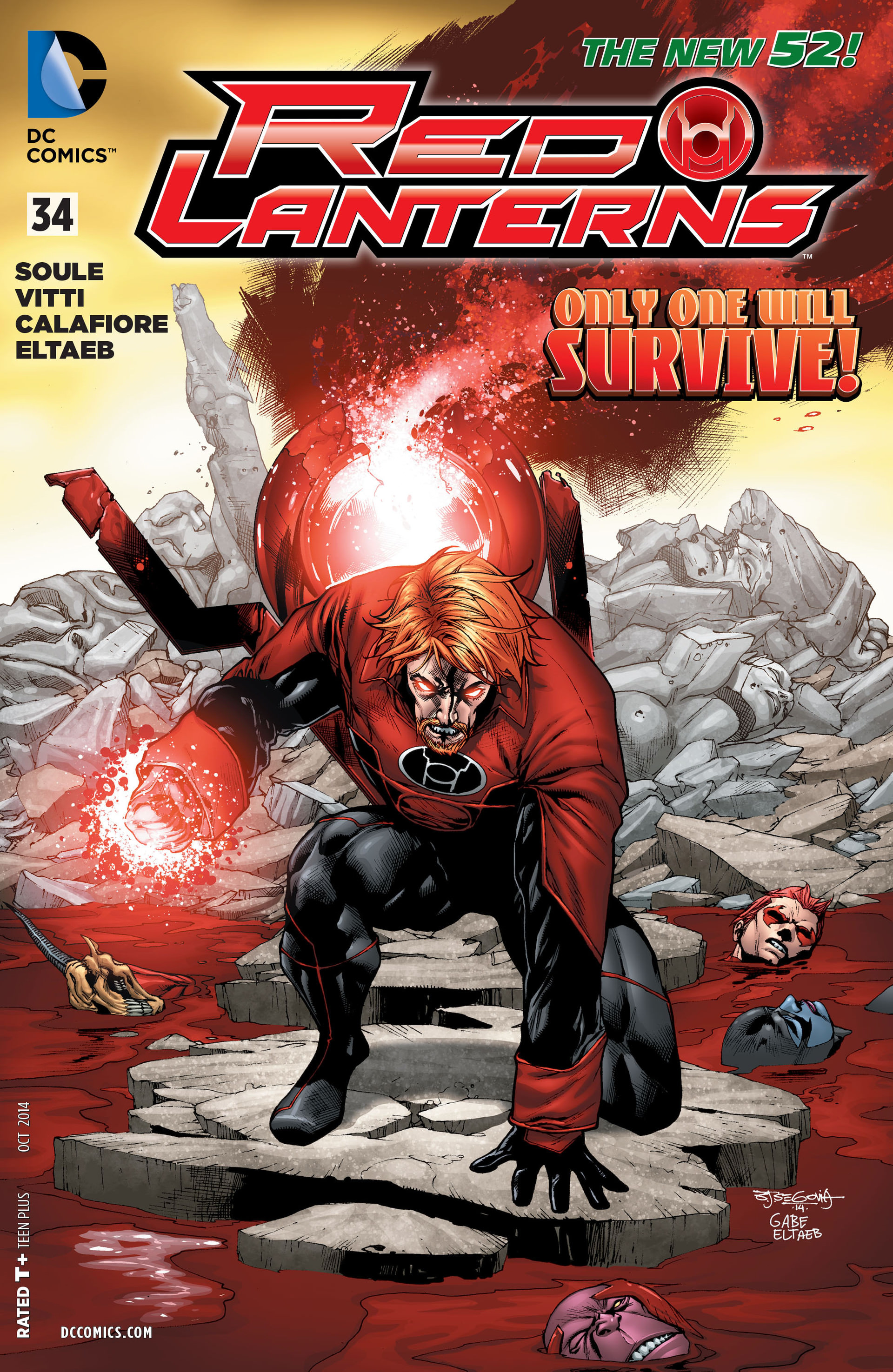 RED LANTERNS #34 by Charles Soule with art by Alessandro Vitti and J. Calafiore and colors by Gabe Eltaeb should come with a theme music CD.

This issue is the final part of the four issue storyline Atrocities wherein the former leader of the Red Lanterns, Atrocitus, shows back up with a new set of Red Lanterns to wage war on the new leader, Guy Gardner, and his band of Red Lanterns. I’ve found the story to be uneven, to say the least. I thought the first part was a great setup, the second was a quiet moment between friends that was neither revelatory nor  particularly interesting, and the third was an annual issue that was basically a big simple action scene. I wish that this issue had shifted more of its action scenes to the previous and left more room for the wrap-up.

After reading 4 Soule comic books I feel like he’s not that great at actual plot construction, but he’s pretty good at writing a snappy, easily read issue. In my first RED LANTERNS review I said that there was nothing there that was particularly astonishing, but that it was fine, solid cape comics. I think I’m zeroing in more on what’s going on as I read more of these. When I was actually reading the issue, I was basically enjoying it for the most part. It was when I started reflecting on it and looking back over it that I started being seriously bothered by issues, that that were only nagging at me when I was reading. I think Soule is really good at the moment to moment, word balloon to word balloon writing of comics. The whole just doesn’t stand up to the parts.

There’s one particular panel sequence that I really enjoyed. Instead of describing it all I’ll just show it to you.

Unfortunately, that leads into one of the parts that really made me start questioning this story as a whole. Guy Gardner becomes becomes an anime character. It’s like in one of those shows where all the characters use the power of their friendship to supercharge the main guy. The show’s theme music kicks in and the character gets an utterly ridiculous new costume for long of enough to hit the main baddie with the ultimate attack. All the details aren’t quite the same, but it feels incredibly like that sort of thing and the actual event kind of makes the whole preceding storyline feel kind of like it didn’t mean anything. For the last several issues, the characters have been flying back and forth from one planet to another, failing at doing things, making ineffectual plans, and worrying. Now Gardner just out of nowhere becomes a super saiyan wraps everything up super quickly. Half of the cast is dead after not amounting to anything, and Gardner hastily leaves for what feels like nothing more than to put some pieces in place for next month’s five-years-later issue.

The art has kind of the same issues for me as the writing. I like a lot of little things about it, the color palette, the heavy black inks, the designs, but when I stop and actually look at it, I find all sorts of little faults. A lot of it just doesn’t quite fit together. Literally. Something bugs me about the way the heads look resting on top of the costumed bodies. This being a book about magic rings, there are quite a few closeups on the hands, and well…. it would be nice if the artist knew how they look.

I started out my RED LANTERNS reviewing tenure by saying that it’s not groundbreaking, but it’s a pretty professionally well done cape comic. At this point three months later, I don’t think that’s enough for me anymore.

Buy this comic if you like lots of characters dying, anime, comics in service of line wide gimmick events.