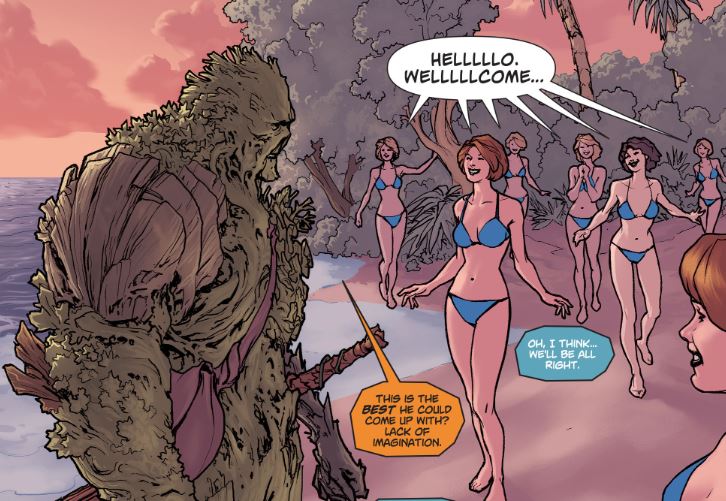 On the one hand, SWAMP THING: FUTURE’S END #1 by Charles Soule and Jesus Saiz is the big exposition dump we have to get out of the way before Swamp Thing can get involved in the next big blockbuster super-crossover DC story. I like Swamp Thing best when the writer is allowed to pace the stories out on their own terms, when we’re not dealing with the forced drama and spectacle of the semi-annual Big Event Story comic publishers use to stop their writers from doing their best work, but Charles Soule has such a gorgeous, otherworldly, and clear vision of this character’s corner of the DCU that watching Swampy go around and talk to a bunch of dudes is actually pretty entertaining.

The focus is on the Green’s relationship with the Red, the Divided, the Gray, the Metal and the Rot. A neat thing about the New 52 Swamp Thing is how these abstract notions of natural forces are given life in ghostly avatar characters. Soule has done a fine job of exploring the psychedelic and Jungian notions of Alan Moore’s Swamp Thing while staying true to the Universal Monster roots of the character with plenty of action and horror content.

The interactions between Holland and the other avatars and representatives of the natural and artifical world are well-written, providing some drama and some interesting philosophical content. When the Rot reminds Swamp Thing of what will happen if life is allowed to simply proliferate until it chokes itself out, Holland reminds him that disease and machines can handle that job for him if he’s uncooperative. Some frightening implications, there.

The really cool thing about this issue is the art, though. Both the visual opportunities that Soule provides Jesus Saiz, and Saiz’ stunning and inventive execution of those concepts. Swamp Thing’s splintery wooden sword, the Gray’s creepy store mannequin girlfriend puppets animated from mold, Holland’s armor of garlic, blasting out concentrated allicin to protect himself from infection in the Kingdom of the Divided.

Strictly in terms of writing, the book I look forward to the most every month is JUSTICE LEAGUE DARK, where J.M. DeMatteis seems to have relatively free reign to just write the best team superhero comic he can, but I don’t think another writer knows their artist’s strengths quite like Soule knows Saiz’s. Saiz’s command of natural and synthetic textures, his talent for action and for atmosphere places him among my favorite Swamp Thing artists of all time. What could be a fairly abstract and dull issue is made stunning, surreal and a little Daliesque by Saiz’s excellent execution and Soule’s trust in Saiz’s abilities.

This is one of those issues that’s kinda just there to set things up for the next big storyline, but rather than being 20 pages of boring exposition, it’s 20 pages of stunning pop art with a few clever twists (Swamp Thing carrying another avatar’s head in his abdomen: brilliant), carried beautifully by Saiz’s splash panels and action shots. This might not be my favorite issue of SWAMP THING I’ve ever read, but it’s certainly one of the most visually stunning.

Soule and Saiz have never let me down on the visual side of things. It’s a shame that Soule will be leaving for Marvel, splitting one of my favorite writer/artist teams since, well, Len Wein and Bernie Wrightson.

For all its glorious execution, the book still carries the vibe of having been written just to set up the Big Crossover Story. I’d rather see Soule and Saiz unleashed on self-contained mini-series.