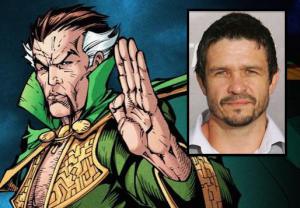 Ra’s Al Ghul has been teased from very early on in the series by his daughter Nyssa Al Ghul (Katrina Law) so it was expected that he would someday make an appearance at some point but at long last, Arrow has confirmed Ra’s for the new season of the hit show. Early Thursday, Arrow star Stephen Amell revealed via Facebook what just may be the biggest reveal for the show’s upcoming third season. Who will playing the DC Comics villain Ra’s Al Ghul. Otherwise known as “The Head Of The Demon”.

Actor Liam Neeson who portrayed Ra’s in the Batman Begins film expressed an interest in reprising the role of the Demon in Arrow if asked. However, Stephen Amell and The CW have confirmed that the part of Ra’s Al Ghul will be played by Riddick alum, Matt Nable.

Arrow has at last found its leader of the League Of Assassins within Matt Nable. His portrayal of the legendary villain will first be seen in the fourth episode of the third season titled “The Magician”. He will undoubtedly provide an interesting story as Ra’s carries the wisdom of the ages, having been walking the Earth for nearly six centuries. A master strategist, expert martial artist and swordsman, this illustrious supervillain holds many of history’s secrets within his brilliant mind.

Considering the way the second season ended with The Canary taking leave with Nyssa Al Ghul to rejoin the League Of Assassins, he could either be friend or foe. It is currently unclear. What will Ra’s Al Ghul’s appearance mean for Team Arrow? It is unknown at this time. But you can find out this October in season 3 of Arrow.