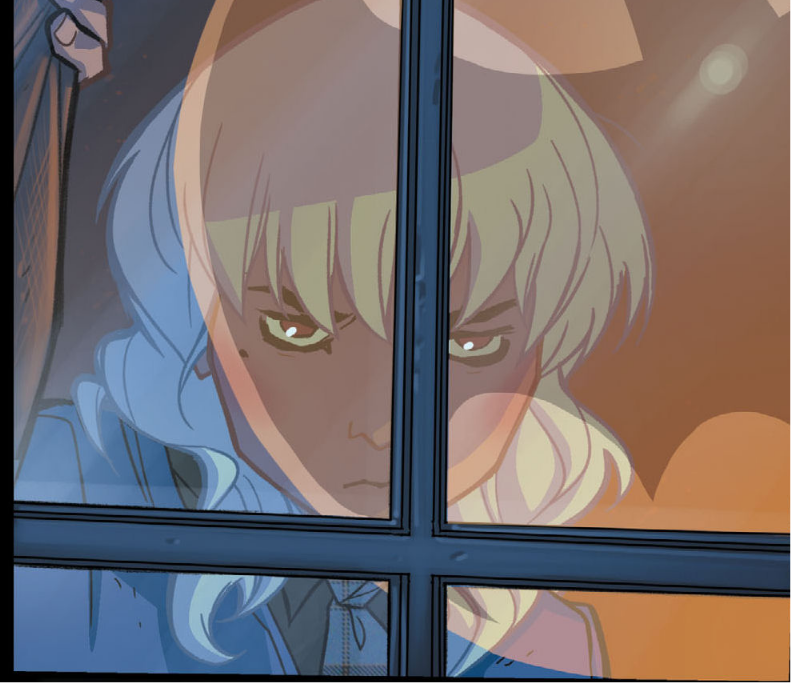 Let the trumpets flare. Let the drums beat. GOTHAM ACADEMY #1 by Brenden Fletcher & Becky Cloonan and art by Karl Kerschl is here and it’s a game changer.  No really. I’m not kidding. Final consensus on the first line: buy this. Support this. Change the way DC does things, for the better!

GOTHAM ACADEMY is a tonal and stylistic departure from DC’s current line and it’s a katana of fresh air cutting through the doldrums of house style. At the launch of their reboot three years ago DC experimented with a few genre titles sort of outside the superhero realm, and a few titles had more experimental artwork (ANIMAL MAN, I, VAMPIRE come to mind). Their “Young Justice” line of titles focused around teenagers was more populated than it is now, but there was something that was missing from said titles and the entire line: fun. All ages material adolescents and younger teens could consume comfortably. Not even the “Young Justice” line. Preboot Stephanie Brown’s BATGIRL book filled that niche; superhero-y, but with a casual and fun feel in between the action. With the return of Babs and the shelving of Steph’s book none of DC’s line was particularly light and teen friendly, especially for girls.

Well no more! Because GOTHAM ACADEMY fills that niche for adolescent and teen readers. A spooky mystery-adventure themed book, GOTHAM ACADEMY is set in Gotham, features a cameo from Bruce Wayne himself, but it’s not (GASP) about Batman. It’s not about superheroes. Centered around a girl named Olive Silverlock, a literal silver-locked, red eyed (how mysterious) girl with a chip on her shoulder who attends Gotham Academy prep. A second year student; something has happened over the summer and has put a wedge, at least in Olive’s mind between her and her (ex?)boyfriend, tennis team star Kyle Mizoguchi. What happened, we don’t know but it might have to do with Olive’s mother. GOTHAM ACADEMY starts with the enthusiastic Mia “Maps” Mizoguchi starting the school and Olive, an old friend via Kyle is assigned as her “nanny”. The book continues from there as Olive and Maps go exploring.

Theme is everything; this is a big departure from DC’s other titles. It has a vaguely indie feel, incredibly adolescent safe and very much in it’s own bubble. It’s structuring itself to be a mystery-adventure and occult book, and being set in an old, old, old school expecting Indiana Jones, Goonies, and Harry Potter-ish antics and cameos from DC’s magic and occult set seem eventually inevitable as mysteries unfold. Ghosts are already a running theme, which means most likely things are not all they appear to be at Gotham Academy. Brenden Fletcher & Becky Cloonan are writing a fun story here; their writing and storytelling here isn’t anything too groundbreaking but tone-wise it’s perfect. You can easily see this being set for an animated TV show adaptation. It’s lighter and scrubbed clean of DC’s usual incompetence when it comes to portraying teens correctly.

Did we mention the art? Karl Kerschl does gorgeous work. Obviously anime-influenced but also very animated looking with it’s uses of lighting and color. It looks like an animated TV show or film. His paneling is experimental and effective at times but easy to follow. Visually gorgeous but approachable. A happy medium.

Did we mention this is an extremely diverse book too? The two leads are both girls and poc, is structured around female friendships and the love interest/supporting character is  Japanese (very rare, Asian men are rarely allowed leading man status in western media), and many of the supporting characters are poc too. It blows most other books out of the water in this regard and is unique in DC’s line. Passes the Betchel Test.

So short. I need more. You’ll be wanting more too. Can’t wait to see what’s next for the Moody Olive and for Gotham Academy to start yielding secrets.

Did you read the first few lines of the review? Buy this. Show DC that experimenting with fresher, younger content and tones is profitable if not more profitable than what they’ve been doing tonal-wise. That’s the only way to get the company to listen to change and grow. Girls matter. Teenagers matter. 40 year old white guys reading the same junk over and over again; don’t matter.