Charles Soule’s SWAMP THING #35 continues to develop some of the ideas shown in the FUTURE’S END tie-in as Alec Holland is greeted by the newest Kingdom, the Machine.

The issue opens in medias res as Swamp Thing comes face to face with a being calling itself a Calculus. The circumstances of their meeting is an interesting setup. Swamp Thing, busy shielding himself from an impending attack by the New Orleans police, is shocked to discover that the Calculus has sent them elsewhere by making every electronic device report an impending hurricane. The Calculus has come to Swamp Thing with a proposal, offering to “maintain the Green,” essentially freeing Holland from his responsibilities, but not his powers. This is brilliantly realized in the story by showing Holland fantasizing about being a hero, with elements of Superman’s costume overlayed onto Swamp Thing’s design.

The Calculus tips his hand a bit in a display of power, which makes Swamp Thing reject the offer. Holland returns to the Green to speak with Jonah about the emergence of new kingdoms. While the Calculus was clear in explaining that he was not an Avatar, he also explains that this is because the Machine Kingdom has moved beyond avatars, believing it inefficient. Jonah explains to Swamp Thing that the emergence of a new Kingdom always precedes a war between that Kingdom and the other. In fact, Jonah explains that most of the extinction events in Earth’s history were caused by such wars. Artist Jesus Saiz shows this in a gorgeous double page splash of the war between the Red and the Green… as dinosaurs.

While not ready to go to war, Swamp Thing does choose to do some investigating into what the Machines are up to. Unfortunately, a last page reveal shows that his curiosity may kill him.

Charles Soule’s script is as strong as ever. The Calculus speaks in a cold manner that is very efficient, almost to the point of being hard to decipher his meaning. Soule’s grasp on Swamp Thing continues to allow the character to grow in a very deliberate manner. Holland has always been one to seek out the peaceful option, a caretaker rather than a warrior, and it’s interesting to watch his caution betray him.

Saiz’s art continues to amaze. Each of Swamp Thing’s growths is rendered with nice detail. The Calculus comes across as a hokey salesman, which is perfect for his character. Saiz’s lines continue to be complimented by Matt Hollingsworth’s colors which provide an organic feel without becoming overwhelming.

My main concern that emerged from the issue has more to do with the apparent set up of the arc. Swamp Thing’s clashes with the other Kingdoms, specifically the Rot, have always been intimate. Anton Arcane has always presented a personal struggle for Alec Holland, and it remains to be seen if Soule can make the Calculus a viable threat for Swamp Thing. While the Calculus displays an entertaining personality here, one worries that the story may devolve into another “hero vs. endless-army-of-robots” scenario. Part of the fun of SWAMP THING has been seeing Holland take on more supernatural and earthier foes. The alien cleanliness of the machines provides a nice visual and narrative contrast, and that will hopefully payoff for Soule and Saiz.

SWAMP THING #35 is another great entry in Charles Soule’s run. Jesus Saiz’s artwork dazzles as always, and the combination of both art and narrative makes SWAMP THING a must read series, even if the arc looks a little standard at this point. 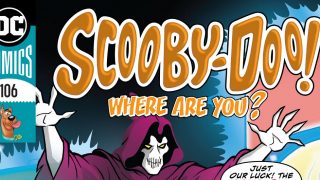