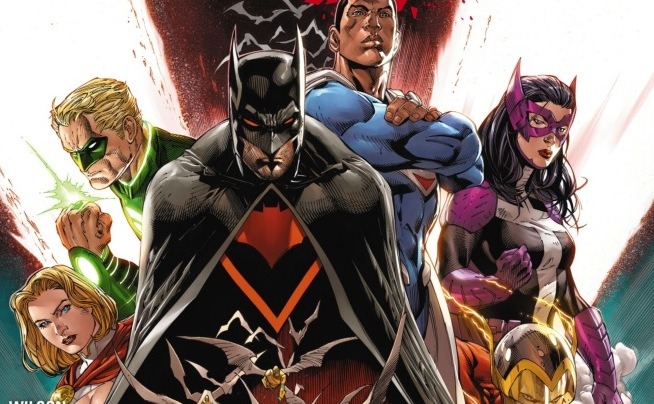 The climatic fusion story of Earth 2: World’s End gives a glimpse to both past present and future in this week’s issue. With all sides of the DC trinity feeling Darkseid’s impact, Powergirl and Huntress return as well as the unconventional Batman and Superman to stand against the forces of evil.

Marguerite Bennett, Daniel H. Wilson and Mike Johnson do an interstellar job at the story of this mammoth issue. Jumping not only time lines but between worlds, these three writers encompass every aspect of the Earth 2 story. I loved how each character linked into the next, having purposes’ that rippled through into everyone, all to the tune of Green Lantern’s narration. It was a beautiful culmination of all the stories as the issue moves from past to present. Flashes of Supergirl and Robin transforming into Powergirl and Huntress, while Batman and Superman also shift forms from the old into the new. It had something for everyone no matter who you are a fan of.

The artwork is wonderful and really accompanies the story so well. With clever paneling and explosions of colour, the multitude of artists definitely gives this issue a bang for its buck. The massive art details offer your eyes a fest of fiery fights and costumes galore. I had to read the issue twice just to see all the details from characters I had missed to little items in the background that I gasped over. It was a wonder team to put together and I think that it was worth getting such a gigantic amount of artist onto the project. Each artist delivered something that only made the next artist stronger.

The massive issue was an elegant display of not only comic book writing but just pure talent from all artists. The story really shone for me and the addition of so many characters really gave so many levels of depth to the plot. But it was the moment when all the heroes perished that made my jaw drop. There was no discrimination of death as everyone felt the sting no matter what hero team you went for. It was also the trinity that fell, usually one or two but this time it was all three of the Earth’s best defense that really took the toll. Another sweet moment was that the Trinity all had daughters, though two were thrown into another dimension and one became a fury, it was sweet that they all had that in common.

Once again DC won’t let another gay couple past the proposal. As soon as they get a whiff of wedding bells the lights are snuffed out and the half left standing and has to persevere through the tragedy. I was so upset to see that touching moment cut short as much as the issue was 90% tragedy, I just thought it wasn’t fair to rip yet another couple apart.

Earth 2 now has a new team standing against an old foe in a new light. The call to arms has been sounded and with Darkseid’s generals appearing out of the fires of his hell with only the heroes to stand in their way. So stay tuned for the Fury of Darkseid to be unleashed.