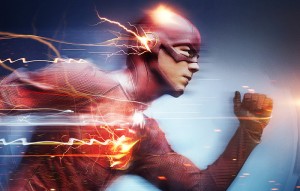 I will admit, I let out an audible groan when I realized this was the backstory of Mr. Bliss.  Giving the shadowy villain a backstory five issues in when this story has felt like it was lagging for quite some time felt like it was going to be awful use of pages.  We do even get the story reason that he is telling Flash this “so he could understand.”  Mr. Bliss and the circus crew are angry because they gave the town joy and entertainment, only for the town to turn its back on them.  Cue Flash attempting to escape.  And cue Mr. Bliss stopping him by finally revealing his power.

I’m beginning to wonder if this series shouldn’t have gone with the original Arrow digital comic style of little mini-stories happening as the season goes on.  Because this story is not well paced.

The flashback artwork is very good.  It is a nice style change that looks great, especially compared to the regular series art.  Flash vibrating the cage bars so they will basically melt was also a nice touch.  It is good to see varied uses of the powers Flash has available to him.

Don’t even get me started on how clichéd and boring Mr. Bliss’s backstory was.  We didn’t any insight into him as a character, we were just told what slight this group experienced to turn them against the city.  And what a surprise it wasn’t.  Also, Mr. Bliss’s power is controlling feelings in others.  Including, seeing their fears!  How delightfully creative and original.  Keep in mind, none of the writing is actually that terrible.  It’s just that we’re getting yet another boring issue.

The Flash Season 0 is back to square one, hoping single cool moments will win you over.  But the lagging plot just keeps on drudging forward, making you long for the Tuesday experience of truly great Flash storytelling.